The wave of political events in Kosovo this week have surpassed the sweltering heat of the summer.

From a marathon debate on border demarcation with Montenegro on Wednesday to the online publication of wire tappings of ruling coalition party Democratic Party of Kosovo (PDK) leaders, this summer season is anything but dull, and a new set of protests is seemingly underway.

This week, the year long standoff between the government and opposition parties over last August’s border demarcation agreement with Montenegro showed some signs of moving forward. On Wednesday, a marathon 12-hour long debate was held between the government’s working commission on border demarcation, representatives of opposition parties, independent experts and interested citizens.

Opposition parties continue to find the agreement controversial and say that Kosovo will lose over 8,000 hectares of its territory to Montenegro; the government refutes their claim, arguing that the border demarcation has been in accordance with Kosovo’s Constitution and laws. 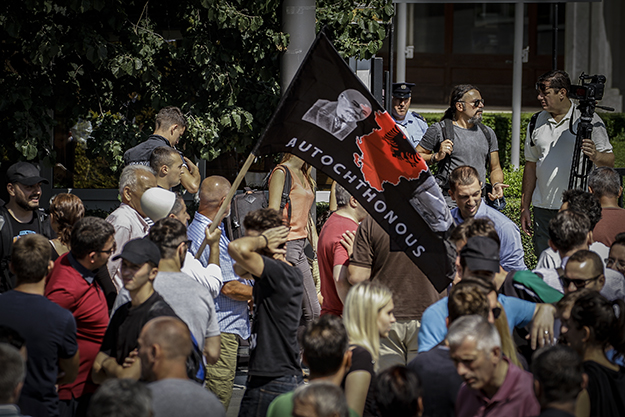 However, besides both sides reiterating their views and finally showing a willingness to debate, little substantial progress was made — neither position changed and the day-long debate left many others confused as to which set of claims to believe.

It was widely anticipated that the border demarcation agreement — a stated prerequisite from the EU Commission for visa liberalization — would be put forward for ratification at yesterday’s Assembly session. This led to the biggest opposition party, Vetevendosje, gathering around 200 people in front of the Assembly to protest. However, after the agreement was not included on the agenda, the protesters left the square.

The agreement is now expected to be included as a last minute agenda addition to today’s Assembly session, which may see the opposition parties and citizens taking to the streets again.

Dukagjin Gorani, a member of Vetevendosje’s presidency told K2.0 that yesterday’s gathering is a “prolog” of the discontent that the people will demonstrate in the coming weeks ahead. “This is just the introduction of a real season that will kick off in September,” he said.

Gorani explains that the roots of discontent are deeper than the demarcation agreement. “We are having no opportunity to participate in the [decision-making] process and that creates an extraordinary feeling of dissatisfaction, apparently vivid even during the summer time.” 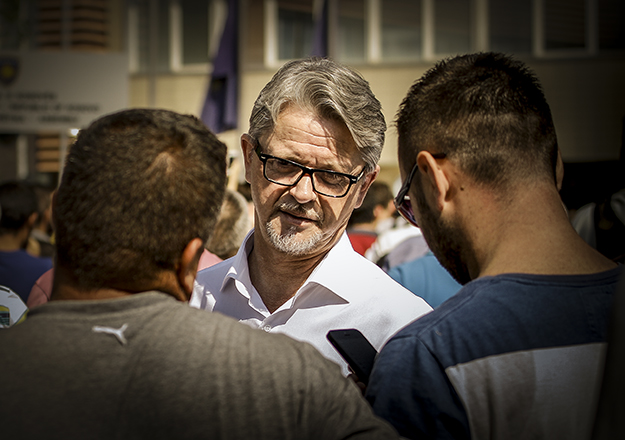 Although spring was relatively quiet politically, a potential summer of protests comes after a winter of discontent in Kosovo that regularly saw people taking to the streets as well as frequent disruption of the Assembly by the opposition parties using tear gas; the Assembly actions saw numerous opposition members arrested.

Tensions peaked with the largest mass protest since the 1990s as tens of thousands of citizens took to the streets in January to oppose both the agreement with Montenegro and an agreement signed with Serbia that will see the formation of an Association of Serb Majority Municipalities. Kosovo’s Constitutional Court ruled in December that elements of the deal with Serbia would breach Kosovo’s Constitution. The following month, an opposition-led protest camp briefly occupied Skanderbeg Square outside the Assembly in order to oppose the international deals as well as Hashim Thaci’s controversial appointment as President of Kosovo; it was dispersed by police during violent clashes on the day of the President vote.

Events in the winter came to a head when a number of opposition and citizen frustrations came together at the same time and events could now be taking a similar path. Whether or not another round of protests for the border demarcation agreement happen today, there’s already another protest schedule for the early evening. A number of citizens have called aprotest on Facebook following a series of leaked wiretaps published this week by the online news portal Insajderi.

The three voice recordings released so far are believed to show how top leadership within PDK controls public enterprises through appointing trusted people and those loyal to the party to the boards, which should be free of political influence.

According to Insajderi, around 1,000 voice recordings that further show political influence and control over the judiciary, police and some media (including the public television) will be released. However, the recordings that have been released to date have already triggered citizen reaction, particularly across social media, as well the upcoming protest.

“Our expectations for [today’s] protest is to make the citizens aware about the illegal influence that a part of politics is exercising over state institutions,” Saranda Sylejmani, one of the organizers of today’s protest against the wiretaps, told K2.0.

What the wiretapping affair will further expose remains to be seen as Insajderi continues to publish the recordings online. Also, when the Montenegro border demarcation agreement is finally put to a vote in the Assembly, it will require two-thirds of the 120 deputies to vote for it, otherwise the standoff will continue.

The upcoming days and weeks look set to remain heated, and not just in terms of the weather.