In the shadow of “X”

Who will protect war crimes witnesses in Kosovo?

She puts her hands in the air, then back on her chest, her eyes filled with tears and her voice that of an exhausted woman in her late fifties. “I can’t,” she says, shaking her head. Denial is the only thing that Ganimete Zogaj, has when asked to speak of her experiences during the time when she and her family of six were part of the witness protection program.

The widow of Agim Zogaj — better known as Witness X — has not the slightest hope that telling her story will bring any good, or help her bring the justice she’s been seeking for the last five years, never reconciling with official findings that her husband committed suicide.

“Many years have passed and no one can do anything,” she says flinging her hands up and walking away from the balcony, only to plunge herself into tears once again.

What you cannot avoid while talking with Agim’s family members are the looks from the neighbors on their balconies.

“Are they relatives of yours?” asks a blond-haired woman while we are leaving. “I am asking because once, just like you, some came and said they were from Prishtina looking for Agim, and as soon as they got to the yard, they shot him.” She recalls the day of June 21, 2009 when Agim, a former Kosovo Liberation Army (KLA) commander, was shot and wounded in his own yard in the outskirts of Prizren.

All of this had happened as a result of Agim providing his testimony against Fatmir Limaj and nine other KLA members for suspected crimes committed in the first half of 1999 in an improvised detention center used by the KLA in the village of Klecka. In August 2011, based largely on Witness X’s earlier testimony, the ten of them were initially charged with committing crimes against the civilian population and crimes against wartime prisoners, in what became known as the “Klecka” case.

Limaj was twice acquitted of the charges by the Basic Court, following a retrial. The trial proceedings lasted five years in total and reached a final verdict this year when the Court of Appeal upheld the original verdict, although Limaj is now facing a new war crimes charge in a separate case; on October 28, Kosovo Special Prosecution charged him in connection with the 1998 murder of two Albanian civillians in Malisheva.

By the time the first Klecka trial of Limaj and others got underway in November 2011, Agim Zogaj was already dead. In September 2011, his body was found in a park in Germany, where he had been sent after entering the witness protection program for a second time.

Zogaj and his family had become part of this program for the first time in 2009. But the horrors they had gone through during this time after his cover was blown — first hiding for three weeks in Macedonia due to serious threats he had received, then in isolation in a storage warehouse in Ulpiana — had pushed Zogaj to withdraw from the program; however when the threats continued, Agim went back into the witness protection program, this time without his family in order to spare his loved ones from having to suffer the effects of isolation as a result of what he knew. 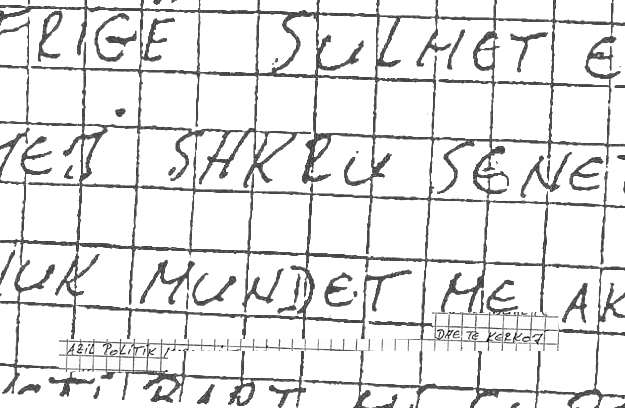 Agim Zogaj’s testimony was fundamental to the prosecution case against Fatmir Limaj and nine others, all of whom were ultimately acquitted.

Within months of reentering the program in July 2011, Agim was found dead, with his family insisting that questions remain over the EU Rule of Law Mission in Kosovo’s (EULEX) role in failing to protect him and his identity; they are convinced that he was pressured into suicide in order to shut him up. “EULEX wants me in the other world even before the trial has begun, so they and their servants can do what they want later,” Agim had written in a letter published after his death by his family in a letter dated September 15, 2011 — just 13 days before his death.

The case of Witness X is known as one of the gravest cases of protected war crimes witnesses from Kosovo having their identity revealed, and as a failure of even international missions who had this competence reserved for them until 2011.

Ehat Miftari from the Kosovo Institute for Justice says that Kosovo has continuously failed to provide protection and security to potential witnesses and their family members, even in those few cases when witnesses expressed interest and willingness to testify regarding serious crimes. “The large part of failure in these cases undoubtedly falls upon international missions in Kosovo, such as [United Nations Mission in Kosovo] UNMIK and EULEX which exercised this competence exclusively until very recently,” said Miftari.

Such failures, according to Miftari, were apparent in the case of Witness X and others, who paid for it with their lives. In 2003, witness Tahir Zemaj was murdered in the city of Peja, following his testimony in court against a high KLA officer. Another two witnesses in the same trial, Sadik Musaj and Ilir Selmanaj, were also murdered. In 2002, a bomb was placed in the car of a protected witness, although this was found before it detonated. Concerns and reactions regarding the lack of adequate protection for protected witnesses in Kosovo have been reported constantly even by the European Commission through its progress reports.

Only as late as 2011 did Kosovo approve the Law on Witness Protection, which regulates special and urgent measures, methods and procedures on the protection of witnesses and justice collaborators in Kosovo for specified crimes.

The decision for inclusion in the witness protection program became the competence of the Committee for Witness Protection, consisting of Kosovo’s Chief State Prosecutor as chair of the Committee, the chairman of Kosovo Police’s investigation unit and the director of the Witness Protection Directorate. The Committee is responsible for the decision on including an endangered person in the program, on extending the stay in the program and on the termination of the program.

Ehat Miftari says that failures in witness protection measures have cost Agim Zogaj (Witness X) and others their lives.

But despite the fact that Kosovo had approved a legal framework that is in harmony with international practices and standards, the implementation in practice is lacking, according to Miftari. In 2015, the State Prosecution established the department on war crimes within the Kosovo Special Prosecution; 167 cases involving 456 persons — 69 of which were transferred from EULEX, involving 218 persons — are expected to be processed by only two special prosecutors. One of them is prosecutor Drita Hajdari, who told K2.0 that up until now, the Kosovo authorities have not dealt with a single case of witness protection.

The problems with witness protection in cases of war crimes, especially those of former KLA soldiers, are seen to be one of the main reasons for establishing the Special Court, the host of which will be the Hague in the Netherlands. Once it is fully operational — anticipated in the coming months — the new Specialist Prosecutor’s Office in the Hague will be able to take over from the Kosovo State Prosecution any cases relating to war crimes that were allegedly committed by members of the KLA during and immediately after the war in Kosovo. Judges and prosecutors involved in cases will mainly be internationals, but will be applying Kosovar legislation as a basis, since the alleged crimes in question are alleged to have been committed in Kosovo.

Prosecutor Drita Hajdari says that in cases under the competence of the Special Court, witness protection should be the responsibility of international institutions. “In other words, institutions leading those investigations,” she said.

"Witnesses were so scared and intimidated that they refused to speak even of the presence of KLA in certain zones."

Legislation regulating the activities of the Special Court stipulates that witness protection will be the competence of the court and its internal mechanisms. According to Miftari, this means that the law and order enforcement institutions in Kosovo will not have access to information or any other competence related to potential witnesses in this court.

Nethertheless Kosovo Police says that it is ready to take action on witness protection of war crimes that will be proceeded by the Special Court, should this be required. “Depending on the needs or requests of this nature, Kosovo Police will take action as appropriate and necessary, according to the Law on Witness Protection and other applicable laws in Kosovo,” Kosovo Police’s communication office told K2.0.

This will not be the first time that a court located outside of Kosovo will try war crimes allegedly committed in Kosovo. The International Criminal Triunal for the former Yugoslavia (ICTY) — supported by the UN and also based in the Hague — has initiated several cases against both Serbs and former members of the KLA. However according to former prosecutor Carla Del Ponte, “the investigation of KLA fighters seemed the most frustrating from all investigations carried out by the ICTY.”

Del Ponte was the first to publicly speak about the intimidation in the cases she was involved. In her 2009 book “Lady Prosecutor,” she wrote: “witnesses were so scared and intimidated that they refused to speak even of the presence of KLA in certain zones, let alone speak about war crimes … Those who were willing to testify had to be transferred with their families in other countries, and some [countries] didn’t even want to have them.” She also criticized NATO’s Kosovo Force (KFOR) and UNMIK for failing to deliver security and prosecute top leaders due to what she suggests was a fear for the security of their own officials.

In her memoirs, but also in numerous reports addressed to the UN Security Council, Del Ponte emphasized her strong belief that it was exactly fear and intimidation of witnesses that had seriously harmed the Hague verdicts in cases against high KLA officials, such as those involving Fatmir Limaj and Ramush Haradinaj, who were both acquitted. According to her, many witnesses had changed their testimony during the trial, and others had mysteriously disappeared or had been murdered.

Five years after Agim Zogaj’s death in a German park, his family are still haunted by the tragedy. “We will not see each other anymore,” his widow has previously recalled his last words to her as being before he went back into the witness protection program.

But the case of Witness X is also a symbolic one, with countless potential war crimes witnesses also living in its shadow. If the new Special Court and future war crimes cases tried within Kosovo are to function effectively, adequate protection of vulnerable witnesses will be critical.