The Salaš Theater in Vojvodina is leading a little revolution.

A small revolution has been brewing in the even smaller village of Kavilo. Since mid-July people from across Vojvodina have been flocking to the village, population 177, to defy political interference in the cultural sphere.

Each night people gather around an outdoor stage to watch performances of the play “Kazimir and Karolina” directed by Robert Lenarda and performed by the Salaš Theater (or Tanyaszínház in Hungarian). The play, written by Ödön von Horváth in 1930, was first banned by the Nazis in 1933. Now in 2021, the Salaš Theater troupe’s scheduled tour, which featured the play, has been banned by the Hungarian National Council in Serbia.

The most recent ban is the result of a request from the Hungarian National Council (HNC), which claimed that there is “inappropriate vocabulary” in the play. The HNC supports the Salaš Theater troupe with around 600,000 dinars annually (around 5,100 euros), an amount that they can’t afford to lose.

This decision was supported by the Alliance of Vojvodina Hungarians (AVH), the largest Hungarian party in Vojvodina and sister party of Hungarian Prime Minister Viktor Orban’s party Fidesz. AVH also participates in government as a partner to the Serbian Progressive Party led by Aleksandar Vučić.

Unlike politicians, the public and many artists view the suspension of the tour as censorship, and have rallied to aid their colleagues. The theater’s management decided to continue performing the play every day until August 12, the date until which they were supposed to have been performing on the road, thereby acknowledging the audience’s requests coming in from all sides, including Hungary. Throughout, visitors have been arriving and bringing food and drinks, while money is collected every day as a means to ensure the theater’s survival.

“We will overcome this summer thanks to the support of the audience, but currently we have no idea how the Salaš Theater will continue to live on,” said Daniel Gomboš, the theater’s director. 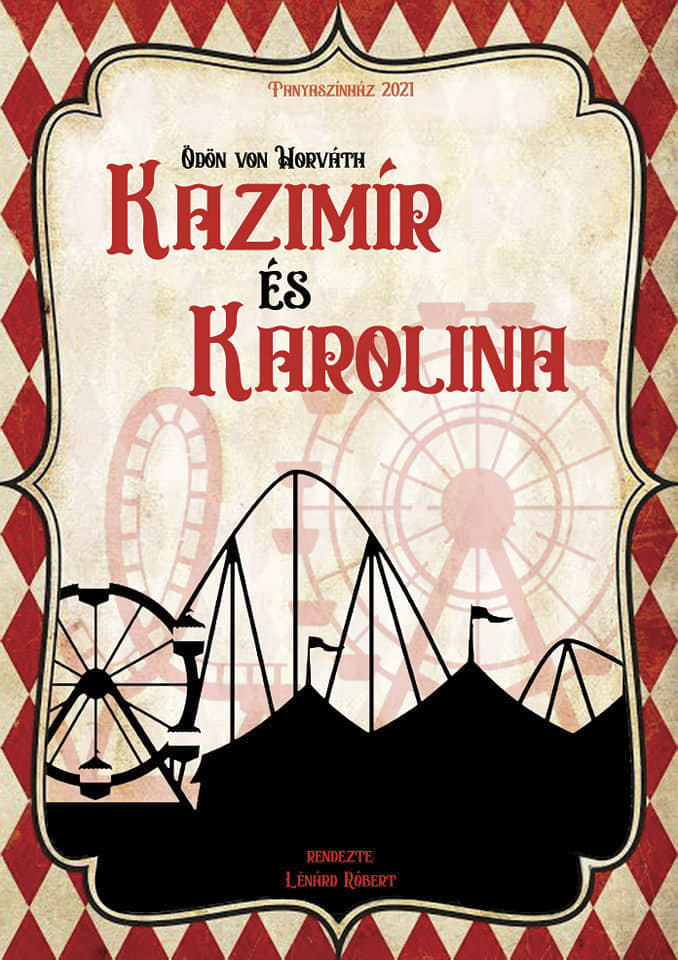 Officials have so far kept quiet regarding the decision to suspend the tour. Finally, however, a meeting was announced between the president of AVH, Ištvan Pastor, and envoys of Hungarian theaters in Vojvodina. The encounter, scheduled to be held “after yearly vacations,” could result in a decision that would affect the destiny of the Salaš Theater, but it can also significantly impact the cultural life of Vojvodina’s Hungarians.

The Salaš Theater is uncommon and unique for many things. Actor Friđeš Kovač and director Đerđ Hernjak established it back in 1978 with the idea to bring theater closer to everyone. The little group registered as a non-governmental organization and started visiting villages in Vojvodina, performing in fields or any other open space, in front of an audience sitting around the stage.

As a rule of thumb, plays were performed before dark because they didn’t have lighting, and the small company traveled on foot and horses. Only a few years ago, they modernized and procured tractors with trailers for actors’ travel and the transportation of props. This year marks the first time they had a minibus.

All plays are free of charge, while the audience ― if it wishes to do so ― can put money into a hat which somebody from the small company carries around after the play is performed. That is how Shakespeare, Moliere, Sterija Popović and many others reached the remotest of Vojvodina’s villages for decades.

This year, they wanted to tour Vojvodina’s villages with a play set during Oktoberfest 1930, describing a couple in love whose relationship erodes due to societal circumstances. This play was banned in 1933, and the script was burned in May of the same year when the Nazis set fire to the works of dissidents en masse.

Decades later, this piece by von Horváth, a Hungarian writer writing in the German language during the 1920s and 1930s, became a classic and entered the list of regular reading in Germany and Austria.

The official Vojvodina premiere of the play was held on July 24 in Kavilo. Soon after, the theater play saw two more performances, after which they should have been on their way touring.

Asked to explain what is happening and what the possible source of this backlash might be, director Gomboš told K2.0 that he wonders the same. Gomboš conveyed the management’s stance that banning a play in the 21 century is “arrogant and unacceptable,” adding that everyone was surprised by the request from Hajnal Jene, president of HNC.

“Just as any other, the Salaš Theater lends its ear to criticism, and is always open for dialogue.”

“We invited him several times to come and see the play, even before this decision was made, and he kindly refused,” Gomboš said.

Gomboš added that he heard criticism that the play uses highly vulgar vocabulary, is not fit for any cultural institution, including objections that actors are “urinating on the stage” during the play — that is, they sprinkle water and pretend to defecate. However, he describes the vocabulary in the play as “slightly spicy,” adding that children are exposed to “more hardcore vocabulary” on their way to school than can be heard during the play.

“And urinating next to the stage with soda water is one of the funniest moments in the play,” Gomboš said.

“Just as any other, the Salaš Theater lends its ear to criticism and is always open for dialogue,” Gomboš said, adding that management didn’t get a chance to respond in any way. “It seems to us that the only acceptable option for the president of HNC was to abort the tour.”

The decision was widely interpreted as political, although members of the theater company are telling the media that they don’t want to speculate and are determined to wait out the meeting that AVH’s president Ištvan Pastor ― pressured by the public ― announced on his Facebook page, “instead of further statements and press releases.” 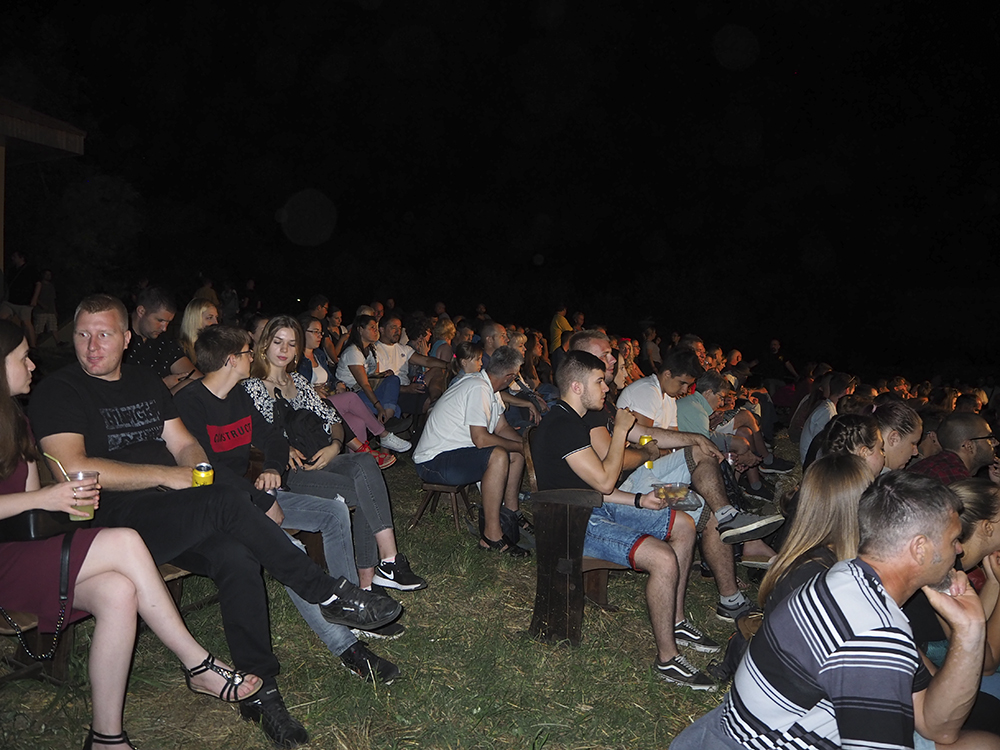 Rather than a regional tour of the play “Kazimir and Karolina,” directed by Robert Lenard, the piece is being performed every evening in the Salaš Theater’s yard in line with the audience’s request. Photo: Natalija Jakovljević.

As Pastor informed the public, the topic of the meeting with the theater’s representatives will be to discuss their future, “what has been on hold for years, and which has brought about this unfortunate case.”

Furthermore, Pastor posted an open letter supporting the request of the HNC to abort the tour, thereby accusing the theater’s management of attempting to politicize the situation. In the open letter, published on his Facebook profile, he stated that the “audience of the Salaš Theater has been exposed to harassment for years” and that the management is under no one’s control while “displaying such catastrophically disgusting plays.”

Pastor announced that solutions for issues concerning the future of Hungarian theaters, cultural life, and institutions could no longer be postponed. He wrote that this should result in “strategic decisions.”

Conversely, Gomboš believes this letter to be a hint that tough times are coming.

“Instead of improving and developing, there is a threat that they may want to tame us,” he said, adding that the role of the theater is to “point out and remind us of societal problems — to hold up a mirror to the audience.”

“Some of them will recognize themselves and do something to change things. Others will be offended and try to break that mirror. We fear that this is exactly what’s happening to us.”

Disapproval is arriving from all sides.

Žuža Kalmar, a Hungarian-language drama actress at the National Theater in Subotica, has resigned from her position in the Hungarian National Council due to the decision to cancel the tour.

Her fellow theater collaborator, Greguss Erdélyi Hermina, told K2.0 that she was “standing in astonishment before the fact” that the tour will be aborted, considering it a “blatantly political move.” Greguss doesn’t shy away from using the word censorship in the context of this case. She said that imposing control over any type of art and cultural life is unacceptable.

She gives her full support to the management and the small company that decided to continue performing the play.

“Politics has no place meddling with these things or restricting any form of freedom of thought or creativity, and especially determining what’s good for people and what isn’t,” said Greguss Erdélyi categorically.

Originally from Subotica, Budapest journalist Gabor Bodiš compares this case to what is happening in Hungary.

Originally from Subotica, Budapest journalist Gabor Bodiš compares this case to what is befalling Hungary. He said that the public is witness to “political marketing, prescribed and ordered by Viktor Orban.”

He recalled that at the end of 2019, Hungary adopted a law allowing Viktor Orban’s government to interfere in managing institutions and appointing directors.

“When somebody is manipulating at the state level, as Vučić and Orban are, then this is tragic for the people, in my opinion,” Bodiš said. “This here resembles a comedy with collateral victims.” 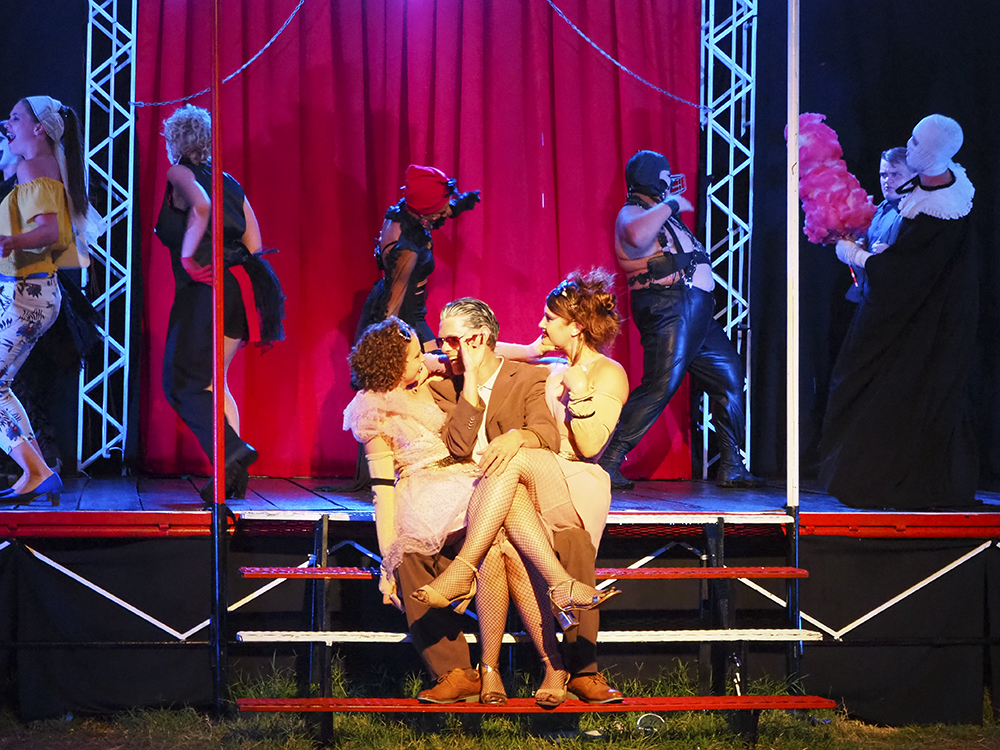 The Salaš Theater theater troupe is determined not to give up on performing the play and fighting censorship. Photo: Natalija Jakovljević.

“They insist on the ‘urinating’ and curse words — because that’s what’s detrimental to our children. It doesn’t matter whether this is actually happening in the play or not,” Bodiš said, pointing to aspects of the decision, and openly asserting his belief that the background is political marketing imported from Hungary.

He reminds us that the following year, 2022, will see elections in Hungary and that Orban also relies on votes from abroad.

Most Hungarians living in Vojvodina have Hungarian citizenship. Budapest-based authorities have been helping Vojvodina’s Hungarians in different ways, including materially, while the Alliance of Vojvodina Hungarians’ leader openly supports Orban.

“Here, in Vojvodina, there is no need to tame culture because it was tamed a long time ago. My respect goes to the small number of exceptions. Apart from them, AVH finances and controls everything, allowing greater freedom to some, and not others,” Bodiš stated.

However, with everything that is happening, some see a sliver of hope in the fact that the public has gathered, backing the play and theater.

“This clumsily performed maneuver gave Hungarian intellectuals reason enough to rally around an idea that everyone could support,” Bodiš said, adding that some benefit could come from it all. “If a move is made toward joint political action, then there is some purpose to it.”

Still, Daniel Gomboš says that the events surrounding the Salaš Theater thrust the young team of actors to unite and toughen up; this unity and energy is visible every evening.

“They will definitely always remember the day when the tour was banned, as they will remember the thunderous ‘yes’ when asked in the Salaš Theater’s yard if they agree to perform the play in the future,” Gomboš said. 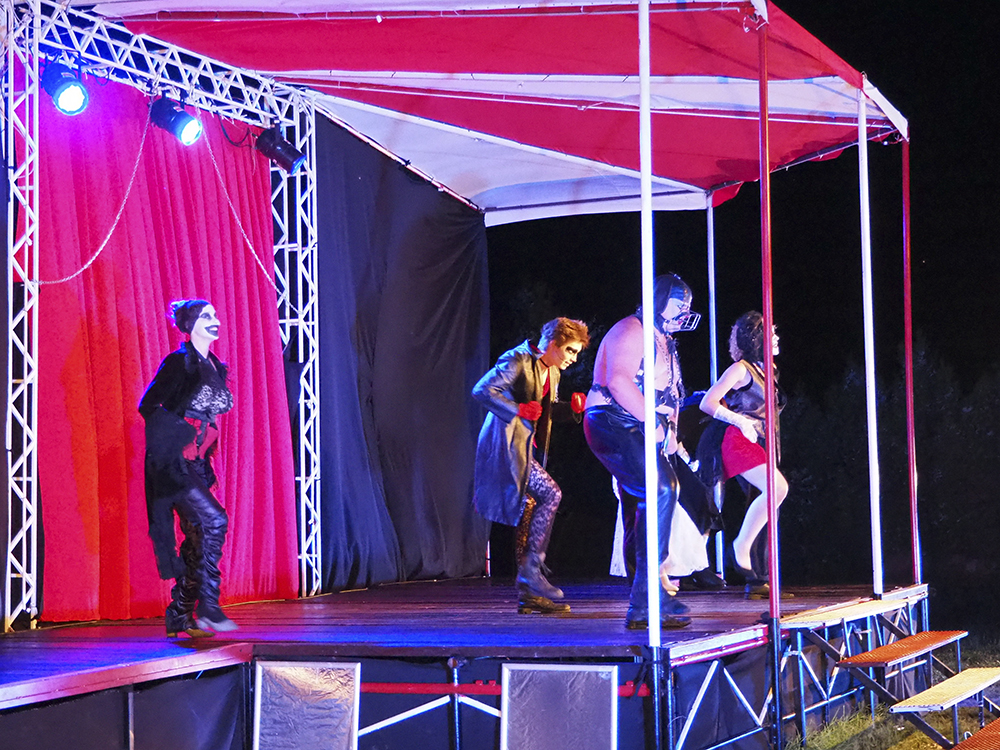 The public in Vojvodina fears that the theater troupe’s tour ban could signal a much more severe period. Photo: Natalija Jakovljević.

“They are still university student actors. A large number of commitments still await them and, we hope, a rich career. The code word ‘I played in the Salaš Theater in 2021’ will surely open up doors to other theaters and mark them as brave young actors. But also, it will close other doors, such as those at events and manifestations that serve for political gain,” Gomboš said.

The director adds that currently, they need and are receiving support from colleagues in Serbia and Hungary, but that the audience that keeps showing up means the most to them.