Just another day in a besieged city - Kosovo 2.0
Blogbox | bosnia

Just another day in a besieged city

The Sarajevo punk scene kept rocking through the war.

It’s the usual pre-concert atmosphere backstage at Sloga, a club in the center of Sarajevo. Faris is beating a chair with his drumsticks, Eso is hanging my mom’s golden chain around his neck and laughing, Bure is getting his eyebrows drawn while tightening up his red and yellow jumpsuit. I, with a bandanna around my head and wearing my grandma’s bear fur coat, am playing Sinan Sakić’s old turbo-folk hit “Zaljubljen u tebe” on a double bass, while Eric Gandini, a Swedish director and journalist, films me.

There are other bands around us getting ready for their performances. You can feel tension in the air. Although the concert doesn’t start for over an hour, the hall is already packed. It is cold. We are all hungry and skinny, but an energy coming from god knows where is keeping us warm.

We were young and eager for life, which in the bloody grayness of besieged Sarajevo, one received only in small spoonfuls.

The beginning of 1994 didn’t bring anything better than the year before.

Heading to the stage

Sikter, a punk rock band we formed in the late 1980s, had its first wartime performance in 1993. The venue was the underground club of Kamerni Teatar 55. The concert lasted as long as the gasoline for the generator lasted. At that time, as was the case throughout most of the war, the city had no electricity. There was so little gasoline that the group that organized the whole concert didn’t manage to perform in the end because we ran out of power. 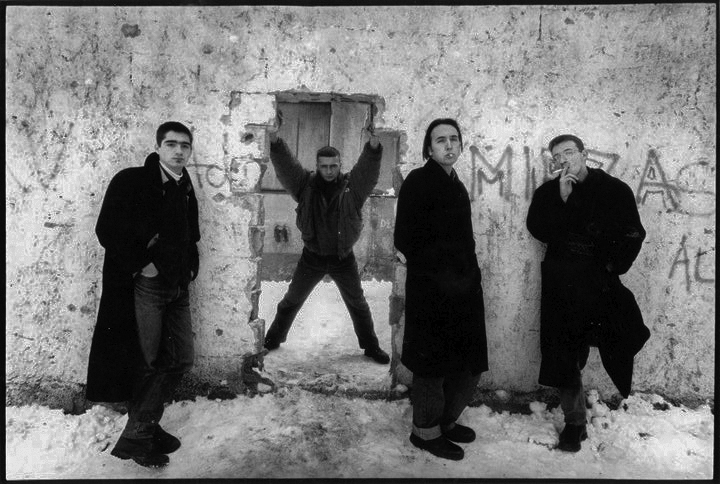 Sikter is iconic in Sarajevo, a punk rock group that didn’t stop playing even under the siege. Photo: Private archive by Nebojša Šerić Šoba.

Throughout the performance, I was looking at a group of refugees, people who fled the war in their own towns and came to Sarajevo, where the only accommodation they were able to find was inside that club. While we were playing, they were cooking rice backstage under the light of a candle.

It is hard to believe that it was even possible to think about music in moments like those. However, we had no other choice. When you are a musician, an artist, you want to communicate however you can and at all times.

So many people were ready to risk their lives for two hours of any music whatsoever.

I went onstage to check how things were going and was stunned to see how many young people managed to come even though they had to evade mortar and sniper fire coming from the surrounding hills. The hunger for a normal life prevailed. So many people were ready to risk their lives for two hours of any music whatsoever.

Some people came from Dobrinja, one of the suburbs of Sarajevo, making their way through a hail of bullets and mortar shells on foot just to attend a concert. I always wondered how I would explain that to someone from the outside, how I would put it into words one day once the war ended.

The first bands started to play. Their fans pushed through into the front row to cheer them on. Every band had their own fan crew based in their home neighborhood. The sound was terrible. The loudspeakers were useless. But none of that mattered. There was light, you could listen to music and it was pretty warm in the crowd.

A crowd formed in the dressing room because a lot of people forced their way in to snatch a drink or a can of food. I would always get stage fright before a performance. I paced back and forth, taking deep breaths, trying to curb my euphoria and come to my senses because after the concert I had to go back to the reality of the war.

At last, it was our turn to play. We were headlining, so they turned the lights down and the crowd started cheering and held lighters in the air. Kicking both of his bass drums, Faris began playing the intro to “Gudra”, a song we whipped up in three minutes during one of our basement rehearsals that became a hit on Radio ZID, a local station.

As soon as our guitars kicked in, the lights came back up and the crowd started moshing en masse. I couldn’t believe I would ever play a concert where people would be elbowing each other just to get a chance to listen.

Heading to the frontline

The concert wrapped up around 9 o’clock in order to avoid the wartime curfew that started at 10 p.m. The backstage was crowded. Everyone was laughing and being cheerful, but there was no time for me to mess around. I rushed home — I lived 10 minutes away from Sloga — because I had to go to the frontline later that night.

As soon as I got back home, where my parents and grandma were waiting for me, in a rush I removed all the tacky clothes I was wearing and put on my uniform. Mom made me a sandwich with nothing in it. Before I left, everyone gave me a lot of hugs and kisses. We were all well aware of the gravity of every trip to the frontline. 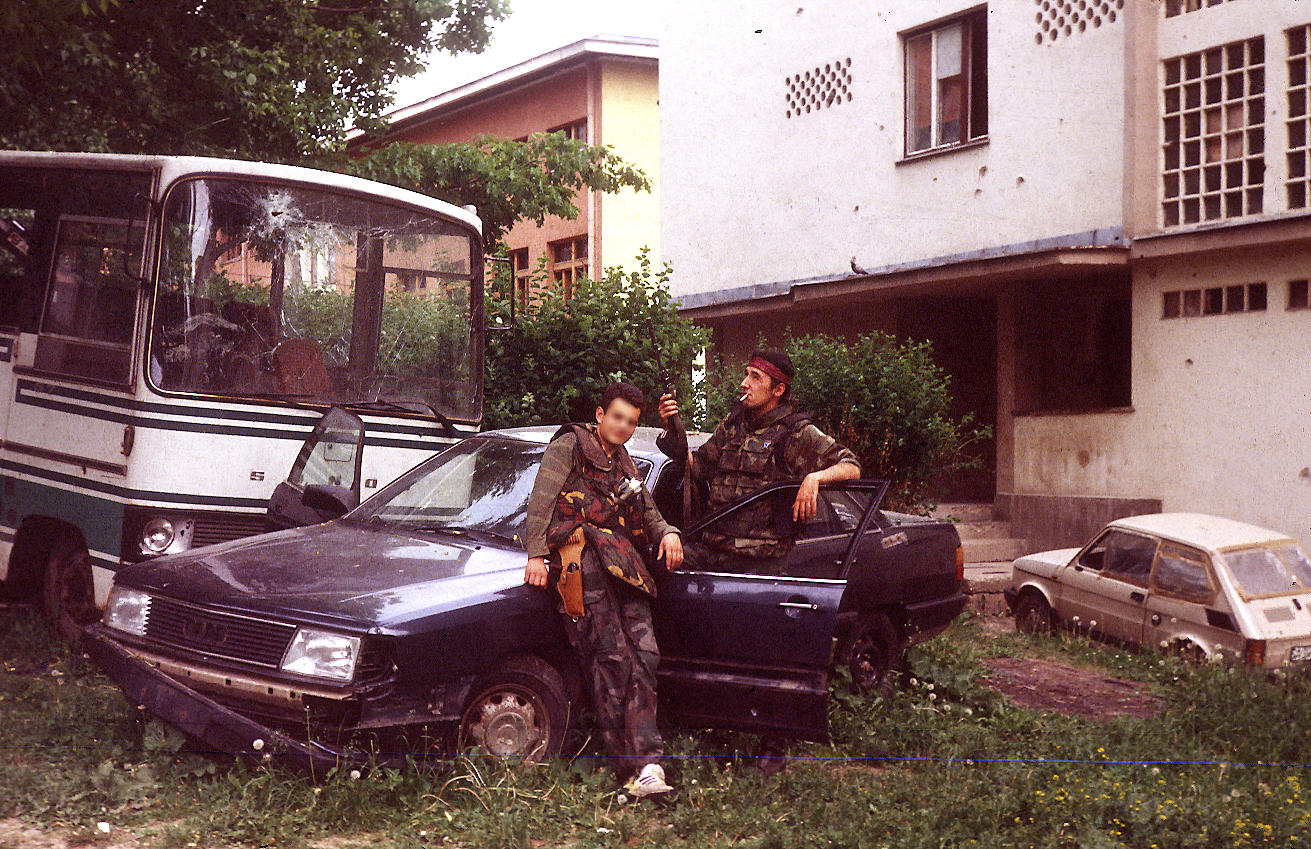 Šoba and many of his friends never imagined that they would become soldiers and live through one of the longest sieges in modern history. Photo: Private archive by Nebojša Šerić Šoba.

Through darkness and smog, I set out to the makeshift barracks where my unit was stationed.

Outside the base, a quick roll call was taken and before we hopped into a truck that was supposed to take us to the city’s line of defense we were handed a few “Malyutkas” to be taken to our rocket launcher guys. The socialist-era vehicle was shaking on the dark bumpy road. Soon enough, we pulled off the main road onto a rural dirt track. It was pitch black.

Our driver could barely see anything in front of him. Whatever the moon lit up was all he could see. It was the dead of night. As we approached a village the driver was no longer able to see anything at all, so he turned on his headlights.

A few more shells fell while we were lying on the garage floor and feeling ourselves to check if we were wounded.

With headlights on, we managed to advance less than 100 meters before a powerful explosion shook us. It went off only 10 meters or so in front of the truck. I cried out.

Everyone started panicking. In the confusion, someone dropped a heavy rocket on my feet. I threw mine away from me and jumped out of the truck. At that moment, another bombshell struck above the truck, on the hillside. That explosion threw us onto the ground, pummeling us with pieces of dirt and stones. We started running toward a garage by the house in front of us. At that moment yet another shell landed in the mud some 10 meters away, but it did not explode. We were lucky.

A few more shells fell while we were lying on the garage floor and feeling ourselves to check if we were wounded.

It all died down in a bit. Since the truck engine block was hit by shrapnel, we had to continue to the frontline on foot.

As I kept walking, soaked and exhausted, I was trying to watch my step in the complete darkness. I was replaying the concert in my mind.

It was really great. Probably one of the best events I ever took part in.

Dreams and real life were intertwining with the brutal reality of the place and time I found myself in. How had I gotten used to this type of life? Would this forever be my “normal”?

Will I live to see the next concert?

We finally came to a house not too far away from the frontline where we were supposed to wait for the shift change. A girl who struck me as incredibly beautiful under the light of a candle was handing out sandwiches with vegetable fat. I thought to myself how awesome it would be if she had been at the concert earlier, I would have had a reason to chat her up. However, we were ordered to press on.

For a moment, I imagine myself back on that stage, in the smoke, fog and haze of rock and roll.

We were moving between destroyed houses, making sure not to step on pieces of glass — the cracking can be heard from far away. At one point, we reached a spot where a German cannon from World War II was buried; it was a museum piece that served more as a morale booster than an instrument of war. We entered the basement of a house that had been turned into a piece of swiss cheese by armor-piercing shells. We were freezing, so we started a small fire and choked on the smoke.

For a moment, I imagine myself back on the stage, in the smoke, fog and haze of rock and roll. I’m throwing guitar picks into the audience while bras are being thrown at me. And then the sound of gunfire, grenades and bombs cuts all that off.

Somewhere up high, far above us, NATO planes were streaking across the sky. Every single pilot would be able to go and have coffee at their base in Aviano, Italy in a matter of minutes, or have breakfast in Venice the next morning.

But me? Where was I going to be tomorrow?

Editor’s note: The Siege of Sarajevo began in the first week of April 1992 and lasted until February 1996. During this time, more than 10,000 people were killed. Sarajevo was cut off from the rest of the world and the people living in the besieged city had no electricity or water. With limited access to food, Sarajevans depended on humanitarian aid. However, life was not brought to a halt and the people who lived in Sarajevo were mounting resistance in any way they could. As one of the main reminders of peacetime, music and culture were as important to many people’s survival as was food and water.