Institutional leaders responsible for the death of a three-year-old in Prizren should be charged with murder.

The first instinct of a killer, in most cases, is denying responsibility for the crime. To enforce their claim, the killer habitually goes further by blaming another for the crime. With these actions, however conscious and hopeless the killer is, they play the last card to save themselves from being held responsible for the most ghastly act; taking another person’s life.

Last week, a three-year-old girl lost her life in Prizren as a result of the collapse of an old house. A few hours after the tragedy, Prizren Municipality officials, as well as officials from the Ministry of Culture, distanced themselves from the responsibility, and blamed each other. For them, a lost life was less important than distancing themselves from responsibility. Before expressing any condolences for the tragedy, they rushed to absolve themselves of the crime.

Prizren’s Historical Center is the most degraded part of Kosovo, despite a great number of legal and institutional mechanisms existing for its protection. For years now, many local and international reports have regularly appealed to authorities, calling on them to act to stop the degradation. In fact, throughout the last couple of years, even the Municipality’s and Ministry’s reports found that there had been increasing degradation. State officials had found that the level of degradation was highest among the old houses on Marin Barleti street, where the tragedy happened last week. However, they did not act. 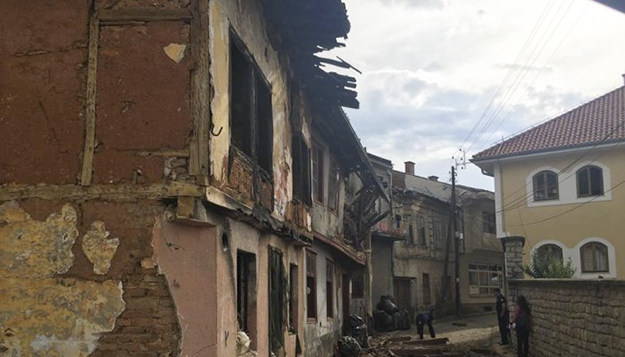 The Prizren Municipality itself had found that these houses no longer had physical stability, and considered them a permanent risk to the lives of citizens. They did not provide safe, alternative housing for the poor families who lived in these houses temporarily, and neither did they place physical protection around the houses, so that other residents of the neighborhood and pedestrians would keep a safe distance. After all, parts of the wall and the roof of the house collapsed on children that were playing outside, on the street. At that moment, any of our children could have been there, simply passing by.

On the other hand, the Ministry of Culture had itself identified these houses as endangered cultural heritage properties, which required preventive measures through emergency interventions. Not one cent has been invested in the rehabilitation of these houses, which are part of the List of Cultural Heritage Sites. Exactly one month earlier, on the same street, 20 meters away from the location where the tragedy happened, another house collapsed; at that time, good luck had saved the citizens that were passing by on that road. But even this most recent “warning” did not produce action on the authorities’ part.

Responsibility in this case is very clear. The Prizren Municipality and the Ministry of Culture, as well as the Ministry of Spatial Planning as the main responsible entity for the Law for the Historical Center of Prizren, as a result of their inaction, caused last week’s tragedy. Their negligence produced fatal consequences, and for this reason, the leaders of these institutions must be prosecuted. They should be accused of murder. Article 8 of Kosovo’s Penal Code specifies that criminal offenses can be commited through action and inaction. Furthermore, this article specifies that criminal offenses are commited through inaction when the perpetrator does not act as they are obliged to.

This tragedy should be called what it is: murder. The least that the leaders of these institutions are morally obliged to do is to resign. They must receive the deserved punishment for the murder of a three-year-old, as a result of their inaction, by neglecting all warnings and clear findings. This would be the only moral compensation for the girl’s family, and the only opportunity to prevent further tragedies.