Kosovar human rights activists will mark Human Rights Day tomorrow (Saturday, Dec. 10) with a range of activities and street actions. The actions will address different human rights violations and the need for better protection of vulnerable groups. Dec. 10, is marked globally as the anniversary of the United Nations General Assembly’s adoption and proclamation of the Universal Declaration of Human Rights in 1948.

The Kosovo office of the regional organization Youth Initiative for Human Rights (YIHR) has dedicated the past week to human rights activities including the publishing of a report on the situation of human rights in Kosovo and the screening of the documentary “Snowden,” which was followed by a discussion on privacy rights.

For Saturday’s Human Rights Day itself, YIHR has chosen to focus on the specific issue of education. Executive director Teuta Hoxha told K2.0 that this was a break from the past, where YIHR has tended to mark the day by raising its voice for human rights in general.

“This time we are more specific and we selected schools. [We did this] as a result of many problems, be it the lack of security in schools, violence in schools — either from teaching staff, or amongst students — and just on Wednesday we had a case where a young man got killed.”

Hoxha referred to the murder a 22-year-old young man who was killed in front of the Frank Bardhi school in Mitrovica, with two 17-year-olds who attend the school arrested on suspicion of committing the crime.

As part of tomorrow’s action, YIHR activists will take to the streets to improvise a classroom in Prishtina’s Skanderbeg Square. Activists will hold banners that will have statements on such as “Our schools aren’t a secure place,” “We want all-inclusive schools” and “We don’t want racial divisions in classrooms.” 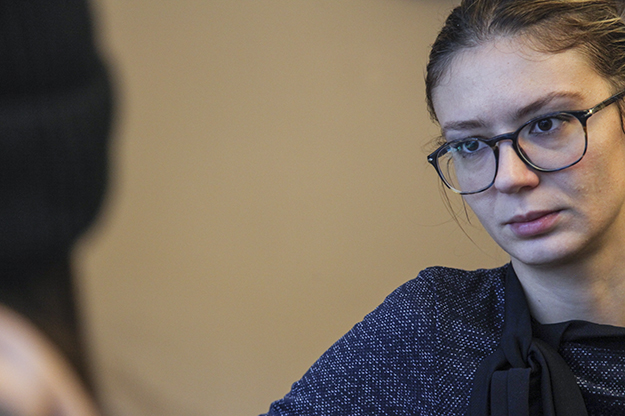 Teuta Hoxha is executive director of Youth Initiative for Human Rights, which will focus its Human Rights Day actions this year on schools.

Hoxha explained that the messages are all based on issues that have been raised in different reports as well as in the media. Commenting on the banner “We want all-inclusive schools,” Hoxha pointed out that discrimination against Roma, Ashkali and Egyptian students in the classroom remains a serious concern.

In the 2012/13 school year, the segregatory policies of Mustafa Bakija school in Gjakova, where Roma, Ashkali and Egyptian children were placed in a separate classroom, attracted widespread national and international attention. The school immediately reacted by placing the minority community children in the same classes as Kosovar Albanians. Although similar segregatory policies have not been reported in Kosovo since, children from minority communities continue to be discriminated against in school; anecdotal evidence suggests that individuals continue to be told to sit at the back of the classrooms, to be neglected and to receive no encouragement to participate in extracurricular activities with children of other communities.

“Targeting schools was an idea from the activists themselves since the process of education is very important in the way in which thoughts are constructed and deconstructed relating to different issues,” said Hoxha, highlighting the process of the recent drafting of the new school curriculum, during which the Ministry of Education, Science and Technology (MEST) didn’t collaborate with NGOs.

Activists will invite passersby to write messages on a blackboard, which at the end of the action will be placed in front of the Ministry of Education.

Referring to the report published on Monday, Hoxha said that the overall findings were pessimistic, with problems highlighted in each field of human rights. “Gender-based violence remains high, while on the other hand sentences for perpetrators are either low, or they get acquitted of all charges,” said Hoxha. “Then we have persons with special needs and their access to institutions, the issue of missing persons and the lack of responsibility for addressing this issue.”

She suggested that the only positive thing mentioned in the report is the LGBTI rights march that was held on the International Day against Homophobia, Transphobia and Biphobia, which attracted support from institutions, NGOs and activists.

However although the march took place without incident, the LGBTI community continues to remain highly marginalized and vulnerable in Kosovar society. In order to address violations of the rights of LGBTI persons, three organization that work on LGBTI rights — Center for Equality and Liberty (CEL), Center for Social Emancipation (QESh) and the Center for Social Group Development (CSGD) — are organizing a number of activities that will culminate on Wednesday with the launch of a report titled “Social Protection and Access to Healthcare for Transgender People in Kosovo,” at the University of Prishtina’s Faculty of Philosophy amphitheater.

Blert Morina, program manager at CEL, told K2.0 that since it is the first report of its kind, he hopes that it will trigger more discussions, visibility and a debate on discrimination against transgender persons in Kosovo. 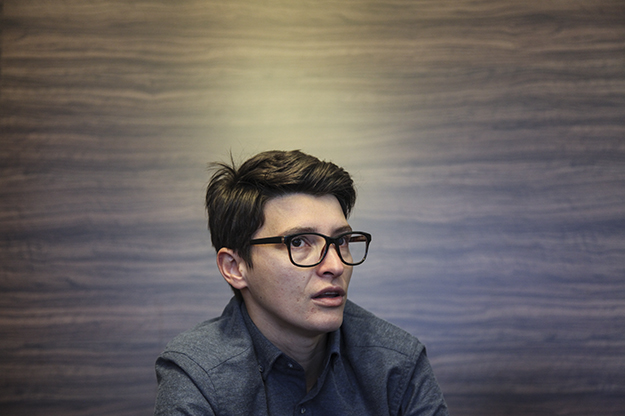 Blert Morina is program manager at Center for Equality and Liberty, one of three LGBTI organizations in Kosovo that are holding a range of actions to mark Human Rights Day.

Today (Friday, Dec. 9), the three groups are launching a video-campaign with different messages that highlight LGBTI issues, while next Tuesday (Dec. 13) they are organizing a roundtable with judges and prosecutors in order to address the treatment of LGBTI persons by the judicial system.

As a basis for the discussion they will take the recent case in Ferizaj, where a case involving an attack against two LGBTI citizens in their workplace was prosecuted in the courts; the case is the first time such an attack has proceeded to trial, despite 18 attacks against members of the LGBTI community having been reported to Kosovo Police since the war.

“Initially we assessed it as progress, that at least we had a case, since 18 cases after the war were never solved,” said Morina.

However he expressed frustration that in sentencing the perpetrators, the Basic Court of Ferizaj did not consider the motivation behind the criminal attack to be linked to the sexual orientation of the victims. “But this doesn’t happen only with the LGBT community, but we see it in general — how the judiciary isn’t functioning in Kosovo,” he said.K