Kosovar students score the lowest in the region.

The results of an international education evaluation, the Programme for International Student Assessment (PISA), were published today. Kosovo was placed in the bottom five internationally in the rankings, and in last place in the region, with its 15 year old students’ performance being at the lower end of all test disciplines.

It is the first time Kosovo participated in the assessment, and the results confirm the general belief and expectations about deficiencies in the country’s educational system. The majority of teenagers tested didn’t demonstrate the basic skills needed to be acquired by the age of 15. 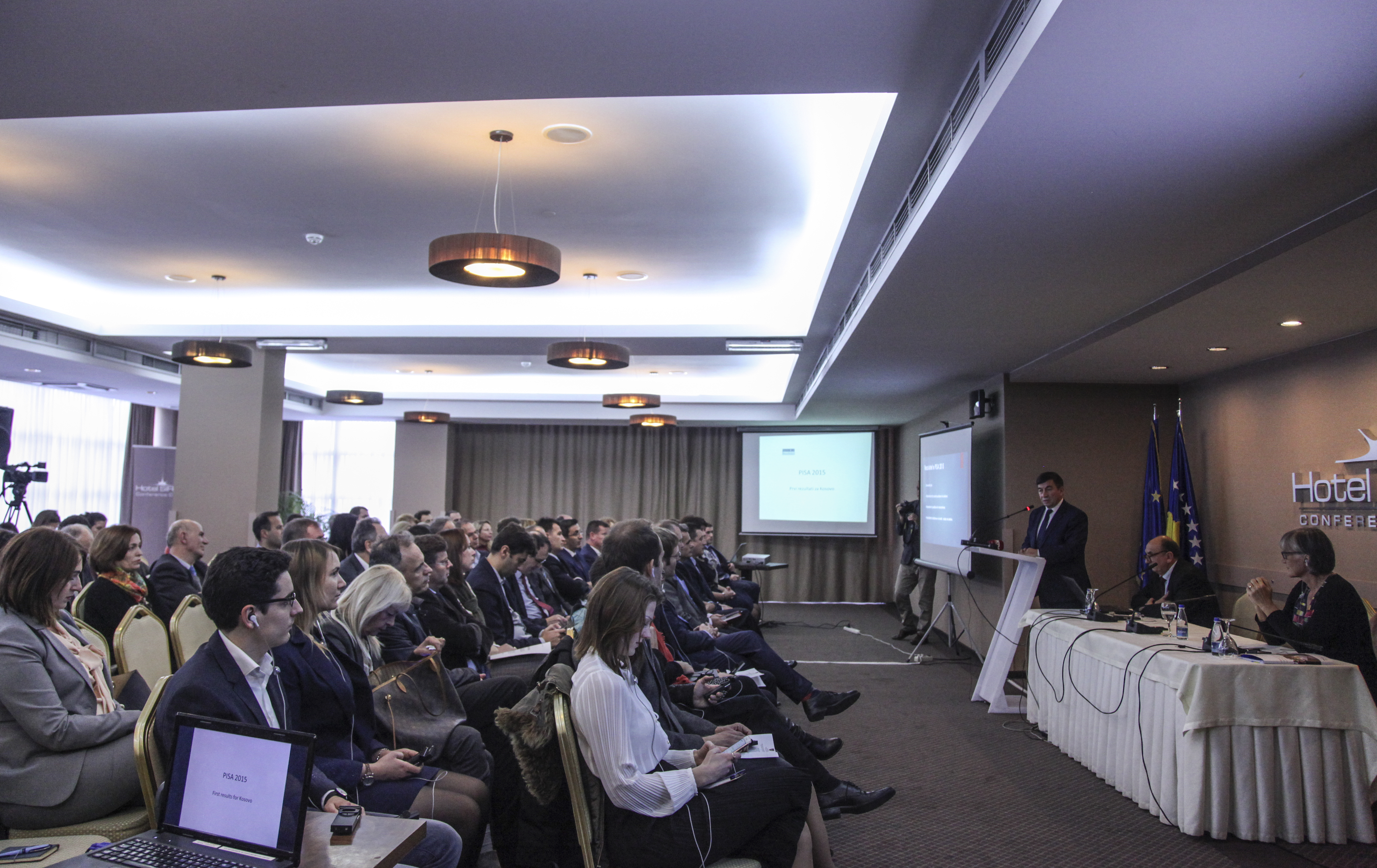 The Ministry of Education, Science and Technology presented the “Report on Kosovo’s Student Achievement in Pisa 2015” at a conference organized at the Sirius Hotel, and highlighted the need to make education government’s top priority.

PISA is an international assessment in science, reading and mathematics. It assesses the competencies of 15-year-old students, by looking into the extent to which students can apply what they learn in school to real life situation. Coordinated by the Organization for Economic Co-Operation and Development (OECD), the test is designed by educational experts from all over the world.

This year PISA was particularly focused on science, in which Kosovo’s students ranked in the bottom three, with only Algeria and the Dominican Republic trailing behind. Singapore tops the international ranking list in science education, with Japan, Estonia, Chinese Taipei and Finland the world’s other best performers.

All OECD members states and many other countries participate in PISA, with students representing more than 70 countries. The first assessment took place in 2000, and the survey has been repeated every three years since then. For Kosovo, it was the first participation in the test. The assessment was undertaken in 28 municipalities, with a sample of 225 schools and 5,161 students in grades 9 and 10 of high school.

The report reads that 68 percent of students in Kosovo do not achieve Level 2 on the overall science scale – necessary for successful participation in economic and social life.

Students are required to use their knowledge and reasoning skills to interpret texts, solve mathematical problems and explain a phenomenon scientifically. The test tries to highlight how effective school systems all over the world are in preparing their students for study or work, and whether the 15-year-olds have the skills they need to thrive.

The Minister of Education, Arsim Bajrami who spoke at the conference today, said that the PISA results should be a turning point for the role of education in Kosovo, highlighting the need to put education as the main priority of government.

“These results should not be used to blame our students, but it is an important moment to extend our criteria … to offer qualitative textbooks and methodology,” Bajrami said. “We need to build a professional development system of teachers … a system of accountability. We have a huge debt to our students, to create better conditions for learning for them. We don’t object to the results but we expect better results in the future.” He added that the government needs to increase the budget for the educational sector and called for the depoliticization of education.

According to the report and results presented today, Kosovo’s mean performance in science is 378 points, 115 points below the OECD average. Other countries in the region, except for Slovenia, also have a lower score than the OECD average. Macedonia comes closest to Kosovo with 384 points. Contrary to many other countries, in Kosovo girls outperformed boys in science by 9 points. Across OECD countries, boys outperformed girls by 4 points. 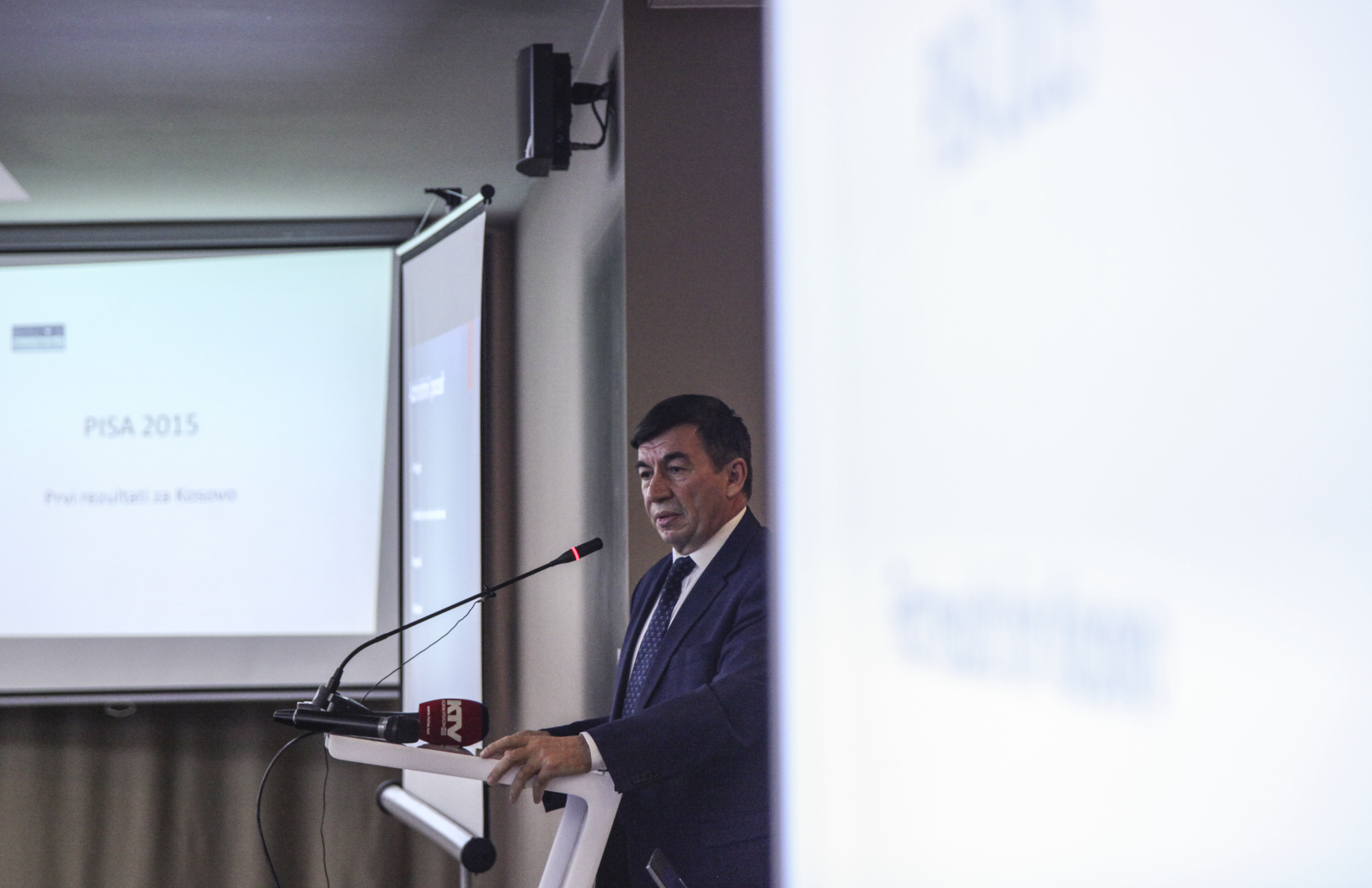 The report reads that 68 percent of students in Kosovo do not achieve Level 2 on the overall science scale – which is considered the baseline proficiency level necessary for successful participation in economic and social life. Students that reach level 2 and above can usually use basic scientific knowledge to identify a conclusion from simple data.

As for reading, Kosovo, together with Lebanon, are the lowest performing countries among all world participants, with a score of 347 points – 146 points lower than the OECD average. Similarly with other countries, girls outperform boys in Kosovo, with a score 36 points higher.

As in science, the report reveals that the majority of students in Kosovo do not achieve the baseline level in reading proficiency (77 percent). Only 23 percent of Kosovar students reached Level 2, a level at which they are deemed able to recognize the main idea in the text and construct meaning within a limited part of the text.

As in science and reading, students also scored poorly in mathematics, with 362 points – 128 points behind the average performance across the OECD countries. Tunisia and Algeria have an equal score with Kosovo, with only Dominican Republic scoring fewer points with 328. Mathematics is the only discipline where boys outperformed girls, in this instance by 9 points.

According to the report, almost four out of every five students in Kosovo do not achieve a baseline proficiency level in mathematics. By contrast, only 23 percent of students in OECD countries fail to achieve Level 2. Students at Level 2 are considered to employ basic algorithms, formulae, and procedures in order to solve problems involving whole numbers.

As PISA’s 2015 results reveal a weak performance by Kosovo’s 15-year-old students, shedding light on the country’s current education system, it also highlights that education must become a national priority at all levels of government, society and academia.K