In June, the Swedish metal band Adrestia played at Termokiss in Prishtina, putting on a sweaty, energetic show. It was one of the only glimpses of a metal band in action in the country this summer, and gave Kosovo’s metal fans a rare chance to mosh, headbang and rock out. A couple of hundred came to Termokiss, with plenty remaining to catch local band Frisson’s set afterwards.

Frisson are one of the few bands keeping the Kosovar metal scene alive. The young four-piece are totally dedicated to metal, naming their band after the goosebump inducing effects their favourite genre has on them. But it is another title, that of the band’s debut album from 2015, “Exit Denied,” that reveals how they feel about being a metal band in Kosovo.

According to the band’s drummer, Lum Havolli, the record was given the name for two reasons: “Because there are no new bands, and the ones that exist have difficulties to go out and show themselves.” Frisson are currently recording a second album, but are on hiatus from live performances, as one of their guitarists pursues his studies in America.

But another young band, Shlem, are making sure the torch of Kosovo’s metal scene isn’t completely extinguished. The band’s bassist, Artea Bajri, explains that the band combine the genre with elements of punk and stoner rock depending on how they feel. She is joined in the band by drummer Florent Bajrami, whose previous band, Sledge Stoner, broke up a few years ago due to a lack of money leading to the energy drying up. 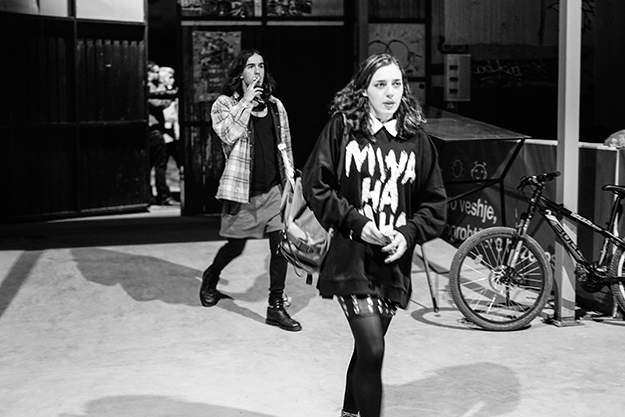 Both Bajri and Bajrami have a rich musical history stretching back to adolescence. Artea is the daughter of jazz composer and musician, Ilir Bajri, and has been playing bass since she was 12. Bajrami meanwhile has been playing drums since he was 13, and has also dabbled in producing beats with a midi-controller, and selling them to rappers. When his computer broke, he returned to metal.

The band are in their infancy, having written seven songs, but Bajri believes in what they are doing, and hopes to find places to play as soon as possible, “so we can be taken seriously, because the band is really good, and we deserve that,” she says.

While current metal bands can be hard to find in Kosovo, another member of Shlem remembers the days when crushing guitars and double time drumming was often heard emanating from Prishtina’s bars. When guitarist Almir Fazlijevic moved to Kosovo in 2008, he briefly thought the heaviest thing people listened to in Prishtina was the Bill Withers song “Ain’t No Sunshine.” However, a little digging slowly revealed a growing metal scene.

“The bands I found were already established,” he tells K2.0. “There was Toxin, and Diadema who were a little bit folk oriented, and Lufte Popullit, who were not really metal, but were heavy, and a good band.” 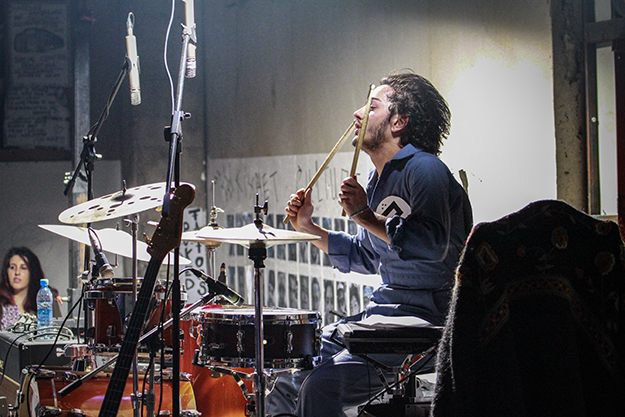 Drummer Granit Havolli first entered the metal scene with MadGod, during an era which he describes as great for the scene. Photo: Fikret Ahmeti / K2.0.

Inspired by the scene at the time, Fazlijevic formed a band he describes as the heaviest ever in Kosovo, MadGod, who were most active in the late ‘00s. The band’s drummer was Granit Havolli, an early metal enthusiast who started his career with MadGod, and describes his time with the band as “a good ride while it lasted.”

Havolli nostalgically recalls an enthusiastic metal scene at that time, with venues across Kosovo hosting shows full of long haired, baggy jeaned metal fans and local bands playing too. In Prishtina, the scene’s heart was a pair of bars on a corner of Bill Clinton boulevard, where Havolli began going to gigs as a teenager, often as regularly as twice a week.

Years later, the same corner attracted Shlem’s Florent Bajrami at a similar age. He found a welcoming crowd there. “The scene then was much more alive,” he tells K2.0. “There were very good people, they didn’t judge you when you asked something, and were willing to help.”

But, over the years, the corner over the road from the electricity company lost its spark. One of the two bars, Hard Rockers, underwent a series of ownership changes, slowly losing the energy it created and live music becoming rarer and rarer. The other, Prishtina Rockers Cafe (PRC) also changed owners earlier this year, with many in the scene saying the atmosphere was lost in the change.

With the “metal corner” rarely putting on gigs any longer, finding a place to play a show has become more and more challenging. The “Rock Per Rock” festival provides an annual opportunity, but that too has shrank in size, from a three day festival to a one night battle of the bands competition.

Frisson won the competition in 2016, but this year saw only two bands from Kosovo appear, 505 from Mitrovica, and the eventual winners of the competition, Jutbina, who are also from Mitrovica and combine rock with elements of post-punk, indie and hip hop. The only metal came from Syrgjyn from Tirana. 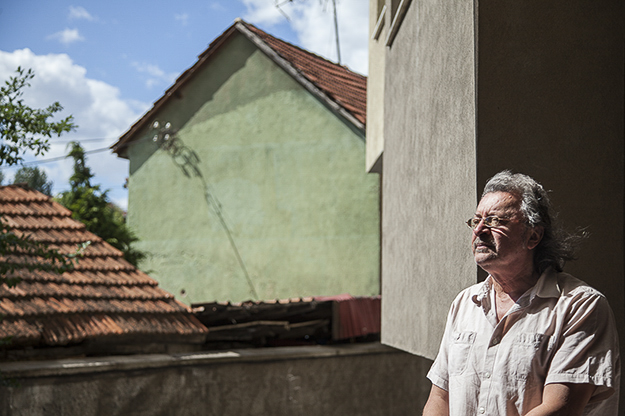 Rock Per Rock’s Agim Berisha is one of many nostalgic for a past era where it was easier for rock bands of all genres to reach a wider audience. Photo: Majlinda Hoxha / K2.0.

One of the organizers of Rock Per Rock is Agim Berisha, a rock musician who has been playing in bands for over 50 years, including Modestet, Minatori and Tentene. He concedes that the festival has seen better days, revealing that in the early days Rock Per Rock was able to award instruments to the winners as they had far more sponsors.

Now, interest has waned, and the days of plenty have ended. But, Berisha says, at least new bands have a venue where they can perform, grow, and compete, albeit only one day, once a year.

Outside of Rock Per Rock, Kosovo’s festivals were almost completely free of metal this summer. Veton Nurkollari, the artistic director of Dokufest, whose ‘DokuNights’ series of events provides some of the biggest showcases for alternative music in Kosovo, believes that there is room at the festival for metal bands, but only if the scene becomes more visible. “It’s not that there is no space, but I myself am not seeing any movement or any metal scene in Kosovo,” he tells K2.0.

Nurkollari mentions another festival in Prizren, NGOMfest, who were also seeking to award prizes to local bands. “There are lots of ideas, but they get stuck somehow,” he says. “Someone needs to work on them, to press forward such ideas. There is always a possibility.”

Outside of festival season, the decline of the metal corner has resulted in a lack of venues for heavier bands. Florent Bajrami of Shlem believes that no one wants to book metal bands in Prishtina, and that seeking out shows yourself also has problems attached. “If you go and ask someone to book you, they look at you strangely,” he tells K2.0. “[The bar owner] does not take you seriously anymore.”

Apart from of a live show, presence in the media can also help bands reach an audience, but it is another area which has been difficult to break into. Fazlijevic tells the story of what could have been a watershed moment for the Kosovo metal scene. 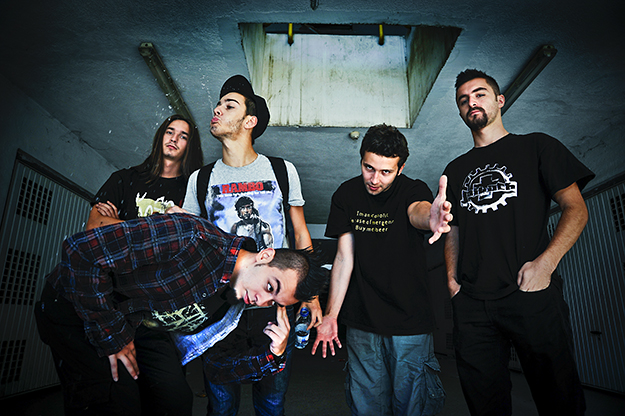 In 2010, MadGod thought they had made a breakthrough for Kosovar metal, taking it to a mainstream TV audience but things didn’t go as planned. Photo: Atdhe Mulla / K2.0.

He reveals that in 2010, KTV invited MadGod and a number of other heavy bands to make a program for their New Year’s Eve broadcast, adding that the bands put a lot of time, and energy into its creation. To celebrate, the bands organized a party at PRC but when it came to be broadcast… nothing! They were cut out of the show.

”A friend of mine called them [KTV],” says Fazlijevic. “He asked why we were cut out of it, and he got the answer that Flaka Surroi [the managing director] had said that we were too heavy for this nation.”

It was a particularly disappointing experience for Fazlijevic, who had grown up in a small town in neighboring Serbia, where a TV station, Third Channel, introduced him to metal through videos from bands like Dimmu Borgir, Marilyn Manson, and Morbid Angel. He believes that the television programming spreading to the provinces and suburbs of Kosovo will never allow the same opportunity.

Despite the KTV incident, Fazlijevic feels that the metal scene of the late ‘00s has still managed to have an impact on society. “I rejoice when I see young people with long hair, and skaters with dreadlocks, because that was taboo here,” he recalls, mentioning vacations in Kosovo in the early ‘00s when he had really long hair, a sight that would get one into trouble. “People wanted to eat me! Eat me!”

“Nowadays, this is not taboo,” he continues. “We are moving forward and there will be some really crazy bands from the younger generations. After all, the whole point is to drive your own trip, and ignore the judgers.”

It is this societal change that gives Granit Havolli hope for the future of metal in Kosovo. “I am very optimistic,” he says. “If we continue with this dedication and walk in this manner then we can advance. It should not be a problem for new bands to form that love of music above all else, and that is what it takes.” 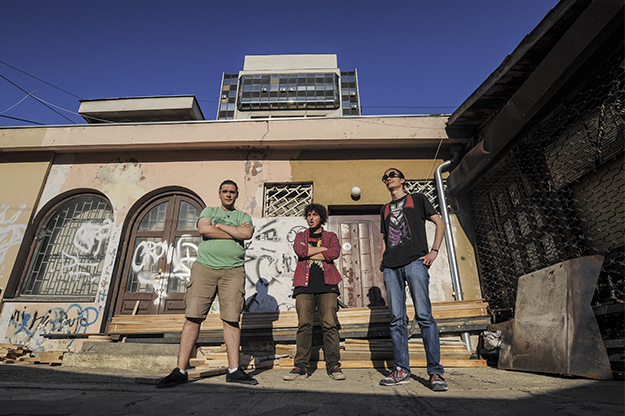 While Frisson won Rock Per Rock in 2016 and are in the process of recording their second album, the band’s bassist Shpetim Smolica thinks that metal in the country is becoming extinct. Photo: Atdhe Mulla / K2.0.

But Kosovo’s current metal musicians have less faith. Artea Bajri believes that the difficulties of being in a metal band in Kosovo are likely to discourage future generations. “I’m not generalizing, but the majority have this thing that they expect to become famous and have money right away,” she tells K2.0. But in the Kosovo metal world, any material rewards have to be hard fought. As Bajri puts it, “It is hard to do metal, except if you love it too much.”

Shpetim Smolica, Frisson’s bass player has even gloomier predictions. He believes that bands that started off playing metal have grown softer, that fewer and fewer bands are forming generally and those operating at the heavier end of the rock spectrum are rarer still. “Metal as metal is becoming extinct,” he says, adding with a hint of mockery. “I am talking of course about Kosovo, because out in the world people know what good music is.”

It’s a diagnosis shared by Fazlijevic, who believes that metal in Kosovo “is being held by a thread, like, the last straw. It’s about to be nonexistent anymore.”

It is hard to see where a saviour is likely to come from. While the Ministry of Culture, Youth and Sport has a fund available to musicians, Sami Piraj from the Department of Culture, told K2.0 that it tended to be focussed on “more serious music.” As is typical, public money seems to be reserved for classical music while more contemporary genres are left to market forces. Without support from Kosovo’s media outlets, festivals and music venues, the genre could be lost in the country forever.K