When Blert Morina next crosses the border, he will have new documents and a victory against the state in his pocket.

In December, the Basic Court of Prishtina affirmed his right to change both his name and sex marker in his identification documents, marking a landmark decision for Blert himself, transgender persons and the whole LGBT movement in Kosovo.

With the decision in his hands, on Monday (January 20) he went to the Municipality of Gjakova to officially request new documents. It marks a return to the institution that denied his request to change his name from “Blerta” to “Blert” and his sex marker from F (Female) to M (Male), thereby pushing Blert into almost two years of court battles.

The court’s decision states that the decisions by the Directorate for General Administrative Work within the Municipality of Gjakova, based on a recommendation by the Kosovo Civil Registration Agency (ARC), are “annulled as unlawful” and obliges the relevant institutions to officially correct Blert’s name and sex marker within 15 days of receiving the court’s decision.

The case is the second such case in which Kosovo’s courts have ruled in favor of protecting the rights of transgender people in this way. In 2018, the Court of Appeals upheld a decision by the Basic Court of Prishtina, which had affirmed the right of an annonymous applicant to change their name and sex marker in line with their gender identity.

Blert is exhilarated that this chapter of his life is coming to an end.

“There were moments when it became too much to balance the work, transition, all the pressure from society, and then the media,” he says. “I reached the point of thinking that I wasn’t saying anything new. Like I was only repeating things and I’d get bored of myself.” 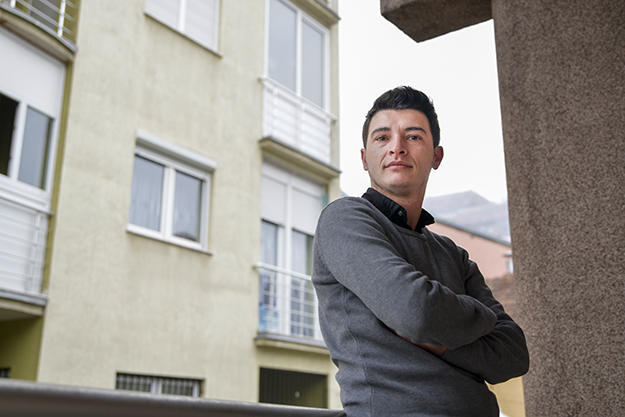 Blert Morina is finally able to request new documents with a changed name and sex marker after almost two years of taking his case through the courts. Photo: Atdhe Mulla / K2.0.

Blert was assigned a female biological sex at birth, but self-identifies as a man in all spheres of life, from his family and social circles to his work. He would particularly be reminded of the mismatch of documents with his gender identity any time he crossed a border, where he would have to endure thorough investigation:

“When [lawyer] Rina [Kika] told me [of the court’s decision] I was so happy, especially because I would hesitate to travel just to avoid the border thing.”

He submitted the request to change his name and sex marker to the Office of Civil Registry in his hometown of Gjakova in April 2018. One month later, when he was informed by the Directorate for General Administrative Work within Gjakova’s Office of Civil Registry that his request had been denied, he immediately made his case public through the media.

The spotlight he has received in his fight against the state has often made him feel that his case has distracted attention from the role he has at the Center for Equality and Liberty (CEL), the LGBT rights organization where he is the executive director.

“The decision is also important because now I won’t be called by the media to talk about my case anymore and so I don’t inadvertently do an injustice to all of the other work of CEL,” he says.

“I am so happy that finally my family are going to be relieved of the pressure they have had in recent years.”

But it is his loved ones that have been supporting him and the significance for other transgender persons that make the court’s decision even more important to Blert.

“I am so happy that finally my family are going to be relieved of the pressure they have had in recent years,” he says. “And most important of all is that other people with the same request as me will not go through this.”

Blert’s lawyer, Rina Kika, says that the whole court case represents the complicated dynamic between progressive legislation and its implementation in Kosovo.

“I think that Blert’s case contradicts the idea that we have good laws that are not implemented,” she says. “So, with this case you simultaneously have laws and also their implementation. But in parallel, you also have the resistance of institutions to implement the law, which is seen with ARC refusing the request to change the name and sex marker, by saying that the request is not reasonable and thereby hampering Blert’s integration in society.”

One part of the lawsuit that the court refused was the request to compensate non-material damages such as the anxiety and stress caused as a result of violations to Blert’s rights to private life, equal treatment and human dignity.

She adds that despite their frustrations at this element of the decision, they decided not to appeal because it would mean more court hearings, which could take many more than a year, meaning more stress for Blert who wouldn’t be entitled to new documents until the new decision was delivered.

“I think it is an unfair decision from the court to not give compensation for non-material damages,” she says. “Still, the decision addresses important and essential issues in recognizing gender identity. It is a victory with a small fault.”

Back in 2018 when Blert submitted his application to formally change his name and sex marker on his official identity documents, his application referred to the Administrative Instruction on the Conditions and Procedures for Personal Name Change and Correction; specifically the provision that states: “Personal name hinders person’s integration into society.”

However, the official decision by the Municipality of Gjakova, quoting a recommendation by ARC’s Commission, stated that the application didn’t meet the conditions of the Administrative Instruction “as ‘Blerta’ doesn’t hinder the person’s integration into society.”

He appealed the decision directly to the Agency, but Blert’s appeal was rejected and described as “without basis,” stating that he “didn’t give any evidence, document, note or photography, or archive document that shows that Blerta Morina’s personal name hinders the person’s integration into society.”

The ARC again requested additional evidence in the form of a medical report or decision in order for Blert to change his sex marker.

At the time, Kika described ARC’s decision and justification as “discriminatory” as it excluded Blert based on his gender identity while violating his right to be treated equally and with privacy. She particularly highlighted that the Law on Protection From Discrimination and Law on Gender Equality recognize gender identity as not being tied to a person’s assigned sex at birth or requiring medical intervention. 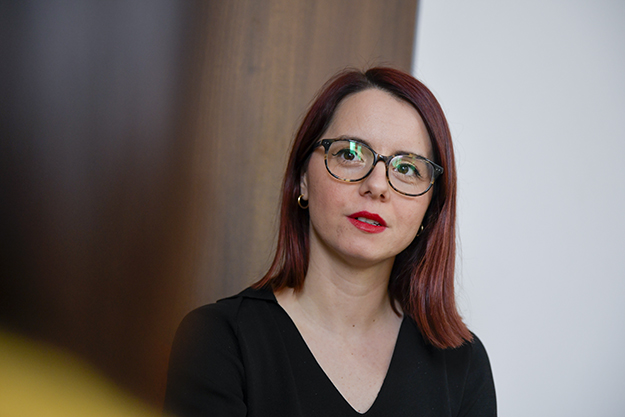 Human rights lawyer Rina Kika, who has represented Blert throughout his long legal ordeal, has long argued that the original decision to deny him the requested changes to his documents was “discriminatory.” Photo: Atdhe Mulla / K2.0.

A few months later, in July 2018, he and Kika, took the case to the Basic Court of Prishtina and also simultaneously filed a complaint against the ARC at the Constitutional Court, asking for a constitutional review of the decision to reject his appeal. It was a step taken with the support of the Ombudsperson.

Kika’s decision to take the complaint to the Constitutional Court before exhausting other available legal measures was triggered by the tendency for long delays in cases at the Basic Court; cases can take many years to deliver a decision, which she argued would violate Blert’s right to have the case resolved in a reasonable amount of time and thereby add to his suffering.

In September last year the Constitutional Court dismissed the request to review the constitutionality of the decision, stating that the request was “premature,” and passed it back to the Basic Court.

But to the surprise of Blert and his lawyer, that same day the Basic Court of Prishtina called them and in October they had two hearing sessions. Within the courtroom it was just them and the judge — nobody from ARC’s side participated.

“The judge [Lirije Maksutaj] during the sessions told us that she is aware of the case’s urgency and that is why she decided to take the case in her hands out of turn and that she was in correspondence with the Constitutional Court who dismissed the case but commented on the right to privacy and recognition of gender identity,” Kika says. “We sent six emergency letters to the court.”

While Blert was going from institution to institution and court to court the publicity made transgender and LGBT issues a frequent topic in the media. Blert says that this contributed to shedding more light on the overlooked LGBT community and movement in the country.

“Just the fact that there were constant discussions about trangender people in the media helped the whole movement because you cannot talk about transgender people without including the whole community,” he says.

“I think what we lacked [previously] was more public discussion. There were times when we would talk about IDAHO [International Day Against Homophobia, Transphobia and Biphobia] and Pride parades but rarely would we have a discussion about the movement independent from these two events. This also contributed to better informing people about LGBT people.”

Blert and his legal representative had discussed their strategy for how to go about the case months before they even submitted the request at the municipality and had taken the firm decision to make every step public.

“I repeatedly told Blert that ‘your request will get rejected in the first instance, in the second one, and maybe you’ll have to wait for years,’” Kika reflects on the first conversations with Blert a few years ago. “We were expecting the potential outcome from the beginning and made the plan. We had meetings with the Ombudsperson, media representatives, aware of the importance of us informing [the public] about the case.”

“For the first time the court has decided to recognize the right to gender identity without offering evidence for surgical intervention or any medical change.”

She highlights that Blert’s persistence and courage to not stay anonymous not only gave visibility to the plight of trangender people but that he has also portrayed “a great example of how to promote human rights and LGBT rights.”

“Now it is more difficult to refuse new requests for trangender people,” she says. “And the most important thing is that for the first time the court has decided to recognize the right to gender identity without offering evidence for surgical intervention or any medical change.”

In fact Blert, who started hormonal therapy exactly two years ago as part of his planned transition, has never had more male features than he does now. With a deeper voice, noticeable beard and hairy hands, and visibly much more relaxed, he smiles at the idea of soon getting his new documents.

And, if by any slight chance ARC doesn’t implement the court’s decision, he says he is ready to file a criminal complaint.K