Lost in my own culture - Kosovo 2.0
Blogbox | Gender

“Conduct yourself carefully, you’re a girl!”.

Once, among a group of women I was meeting for the first time the topic of how girls are raised came up. It turned out we had all been told this line at least once in our lives. In retrospect, it is sobering that this turned into a bonding experience, despite our individual differences we had much in common.

This is how women and girls are spoken to. Whenever this subject comes up I am always reminded of a specific event. A few years ago, the case of a girl who was physically and sexually abused was made public in Albania. As the case was developing, everyone seemed to want to give their opinion.

Whether in public or private, a similar pattern emerged whereby people shifted the attention away from the criminal and towards the victim. “Why didn’t she report it earlier?”, “Yes she was abused, but…”, “Where was her brother?”, “She was probably asking for it,” “What a pity, both of their lives are now ruined,” etc.

Meanwhile the media seemed focused on sensationalizing the case, printing headlines and content that stripped the victim of her dignity. This media frenzy lasted about a week and then everyone forgot it ever happened. But how did we get here? How can people justify vocalizing such things? Maybe the answer lies in that warning: “Conduct yourself carefully, you are a girl!”

This type of language is found at the root of the mindset that leads to the oppression of women. Words shape our reality. We should never underestimate how susceptible we are to being defined by the way we are referred to and the language that we hear being used.

In English, the word “man” is used to refer to a male person or to humans more broadly. One cannot help but wonder whether humans are regarded as synonymous with men and how this is a reflection of the higher status that our society attributes to them. Meanwhile, the dictionary definition of the word for man in Albanian is “burrë,” and the adjectives that follow the dictionary definition associate men with being brave and noble, someone who is honorable and keeps his word.

When women are attributed adjectives such as faithful, brave, noble and truthful, they are called “burrëresha,” according to this definition. Apparently, if a woman were to be any of these things, she would have to act like a man.

Does the language we use shape the way we act?

In the language we use everyday, women are positioned as inferior to men, an old sentiment, but one that is still kept alive to this day. This compilation of proverbs about women, taken from the book “Proverbs of the Albanian People” (1983), provides an illustration of how women and girls have been referred to throughout history.

Without exception, the proverbs paint women as evil, good-for-nothing, disposable beings. While all of them are shocking, one particularly stood out to me: “Vajzës duhet me i rrahë edhe vendin ku rri,” which means, “You have to beat even the place where a girl stays.” It was saddening to encounter an expression that promotes violence against women, an open wound in Albanian society. After all, acts of violence do not just happen one day, their genesis can be traced back to this type of callous and brutal language.

It is not unusual for women to be pressured into continuing to have children until they have a boy, the head of the household, the heir to the family name. This was the case with my grandmother, who gave birth to girls and each time hoped it would be a boy. She once told me, “Vajza lind në shtëpi të huaj dhe shkon në shtepinë e vet,” or, “A girl is born in a foreign home and goes to her own home.” Did this mean that I, as a girl, had no place in the home I was brought up in, was I merely a temporary inhabitant and should I be constantly on the lookout for my true home?

Did this mean that I, as a girl, had no place in the home I was brought up in?

This ordeal of harmful patterns of speech looks like it’s never-ending. As the Albanian proverb goes, “edhe trarët e shtëpisë qajnë kur lindin vajzat,” or, “even the beams of the house cry when a girl is born.” Apparently, when a girl comes into the world it resembles a day of mourning and loss for the family. Since birth, a girl is marked as only bringing sadness and burdening down the ones who brought her to life.

But even decades ago, there were voices countering this narrative. Haki Stërmilli, considered the first Albanian writer to tackle issues of feminism and women’s emancipation, wrote in his remarkable 1936 novel “Sikur t’isha djalë” (“If I Were a Boy”) the following: “If I were a boy, I would show the male world that the hand that cradles the crib is the hand that cradles the fate of humanity. But alas, I’m a girl and as such, I cannot open my mouth and speak out…”

His book showed the oppressive conditions for Albanian women in the 1930s. What’s disheartening is that there is a general lack of follow up to this important literary work. It remains singular. Instead, we get school textbooks where discriminatory gender biases are prominently features.

The media as a reflective surface

In the last couple of years, I have grown angry at how the media treats women. Despite being in a position of influence, the media largely refuses to take a stance against harmful gender stereotypes. Even worse, they often perpetuate such stereotypes.

Not too long ago I came across a blog on a football match with the title: “Men who don’t cry, real men.” The author was commenting on the behavior of fans of the losing team, praising the fact that none of the men shed tears. Bewildering, how in very few lines such a harmful picture was painted, that men should not cry even when they are emotionally invested or even in loss. While glorifying this behavior the author implied that crying is a gendered emotion that belongs to women and in the same breath insinuated that women are weak. 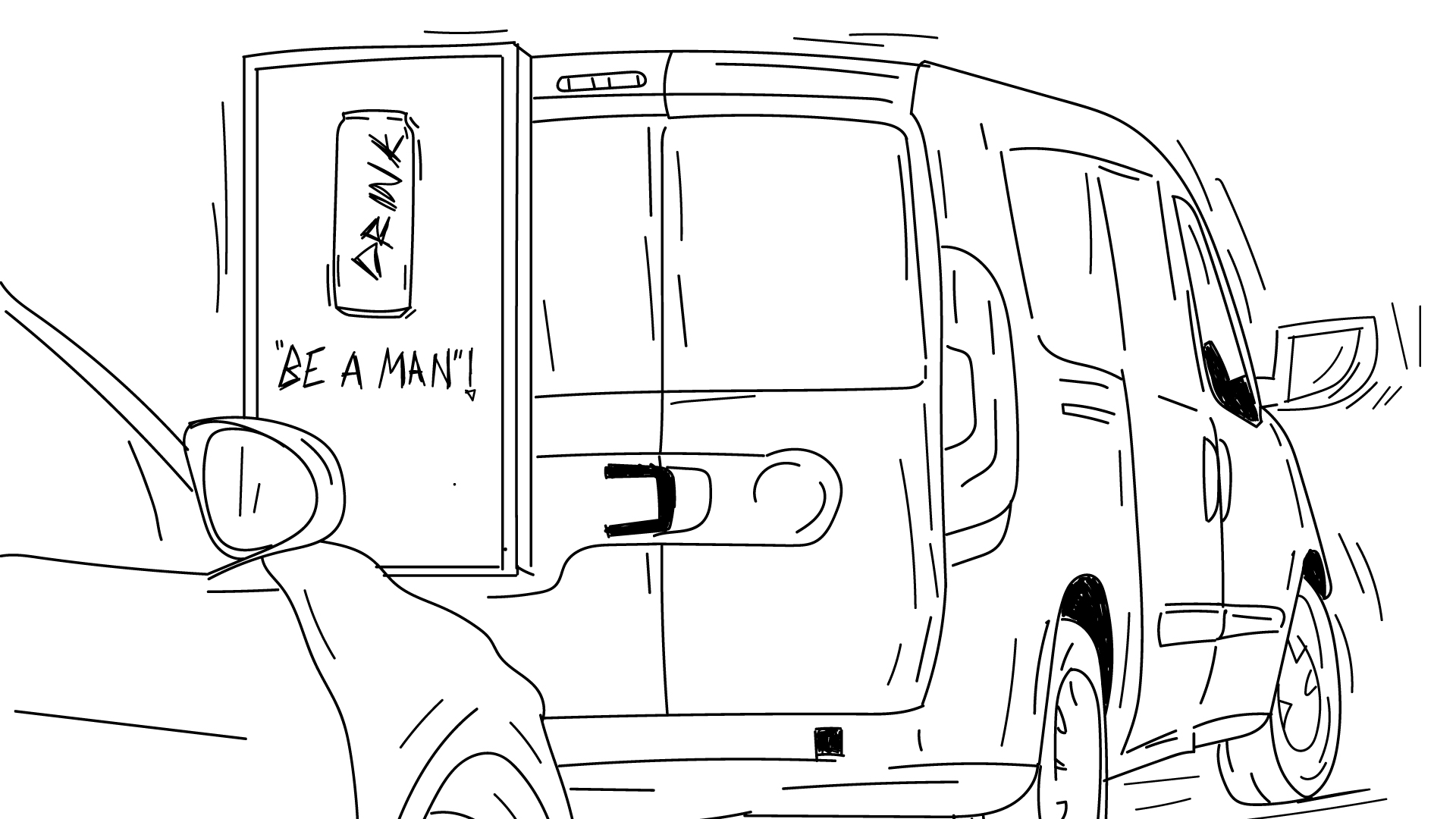 Young girls are taught to never be angry.

When it comes to expressing emotions, there is some truth to the saying “women get sad, men get mad.” Young girls are taught to never be angry. It might be because oftentimes anger is linked to strength, dominance and competence, traits that are perceived as belonging to men.

If a girl were to express anger she would be expressing a gender-incongruent emotion and thus, perceived as emotionally unstable, incompetent and a deviant from the community. Meanwhile, girls are allowed to express sadness while young boys are told to “man up.” A sad man is weak, a sad woman is simply being natural.

The media is unsparing, as was the case with Qerkica, a transgender Ashkali woman from Kosovo. On December 5, 2021, Qerkica was invited to a TV program to speak about the difficulties of being transgender in Kosovo. At first glimpse, this was a breakthrough as it was the first time a transgender Ashkali woman was interviewed and given the public space to talk about what it means to be transgender in a society that does not welcome them with open arms. But instead of pursuing an empathetic and informing route, the hosts chose to do the opposite.

Qerkica was badgered with questions that doubted her identity as a woman, perpetuated gender stereotypes and ridiculed the painful treatment of women. They asked whether Qerkica did household chores and if she struggles with wearing heels. Then they mockingly asked whether she has ever been beaten by a man. Is this the ultimate test to determine whether she is a real woman? Is the suffering of women merely a joke?

When faced with this harsh reality, the frustration can seem overwhelming. If I didn’t know any better I might actually begin to think that as a woman, the disadvantages I face are warranted and the well-crafted box that our society expects me to fit into is deserved.

When I see that I don’t have common ground on fundamental values and beliefs with people from my community, it is easy to feel lost. The discourses on gender that prevail in Albanian society have detached me from my own identity.

(Not) Knowing one’s own power

Growing up I would hear my grandfather facetiously tell my brother, “You are the head of the household.” I would promptly reply, “Well maybe I am or maybe a household does not need one.” This lighthearted conversation with someone I hold so dear ended up seeming much more meaningful when I was hit with the harsh reality outside the comfort of my home. I began to notice this mindset in many forms and I couldn’t help but see things through critical lenses.

I must admit that the terrain women have to navigate can be quite rough, nonetheless, it’s better to put up a fight and lose than to never try. At times it seems that patriarchal, misogynistic values might be so deeply planted that women, as the oppressed group, find it challenging to remove themselves from the narrative that men have written.

The process of internalizing oppression begins from early in life when young girls are taught to behave differently from boys. This treatment is reinforced by the mass media which at times degrades women and uses language that objectifies and invalidates them. Bearing this in mind, internalized misogyny is bound to happen as long as the influence of these factors is inescapable.

The language we use comes as a result of long-standing socialization, mirroring our history and defining the way we act.

Sexist discourse seems to be so embedded in our subconsciousness that we cannot get rid of it easily. The language we use comes as a result of long-standing socialization, mirroring our history and defining the way we act.

Yet the world does not seem all that bleak when I hear people acknowledge the problematic use of language and when I get a glimpse of the unconventional, daring and uncomfortable ways women are confronting oppression. During a conversation I had with Nefise Özkal Lorentzen, the director of the documentary “Sex, Revolution and Islam” she mentioned that horizontal leadership styles and women’s speech are revolutionizing religion as we know it. Women’s efforts to improve inclusivity and equity stem from personal experiences and life-shaping events that have occurred under their treatment as the inessential in society.

Throughout my life, I have encountered, been taught by, and admired women who have prevailed and overcome the hurdles that are placed in front of them while still managing to exude empathy for others. Perhaps, by being mindful of the language we use and by focusing on empathy in the way we treat, think about and talk about others we can begin to be part of a narrative we can be truly and fully proud of.

This article was produced based on the media monitoring done by the Reporting Diversity Network 2.0, with the financial support of the European Union, Balkan Trust for Democracy, a project of the German Marshall Fund of the United States, and the Royal Norwegian Embassy in Belgrade.

The content of the article is the sole responsibility of Kosovo 2.0 and the network members and does not necessarily reflect the views of the European Union, Royal Norwegian Embassy, the Balkan Trust for Democracy, the German Marshall Fund of the United States, or its partners.