Larger, shinier and more lively than ever before, the third Pride Parade was held yesterday (October 7) along the main street in the center of Prishtina. Hundreds of men and women joined in what is now a traditional celebration in support of LGBTI rights in Kosovo.

At 11:30 a.m., LGBTI people, activists and citizens gathered at Skënderbeg square, where rainbow flags — a symbol of the LGBTI and transgender community and movement — banners, tote bags and badges were distributed to the masses.

Under the slogan “Për kon t’rreh zemra” (Whomever your heart beats for), the Pride Parade and Pride Week (7-10 October) called for tolerance, understanding and acceptance. Through this slogan, calls were made to the wider public to join the Pride Parade, to support the LGBTI movement and state that LGBTI rights are basic human rights. In a statement given to the press a few days before, the organizers highlighted the need to fight gender stereotypes and homophobia in Kosovar society.

Around midday, behind a massive banner displaying the slogan of the parade, with the soundtrack of Queen’s “I Want To Break Free” and colorful balloons stuck together to form the word “Pride,” citizens sang and danced as they marched towards Zahir Pajaziti square.

Prishtina Mayor Shpend Ahmeti also joined the march, as did other politicians such as Mimoza Kusari (former minister and former Mayor of Gjakova), Fitore Pacolli and Yll Rugova — the last three candidates on Vetëvendosje’s deputy list. But none of the candidates who ran for the position of prime minister in last Sunday’s parliamentary election (October 6) were seen at the parade, and neither was Kosovo President Hashim Thaçi. In fact, similarly to past elections, LGBTI rights were not in focus during this year’s campaign.

The atmosphere lit up even more when they crowd arrived at Zahir Pajaziti. Lendi Mustafa, a transgender man and activist for LGBTI rights, held a speech before the participants — as he did last year — highlighting the importance of organizing the parade.

“Again, for the third time, after being forced to hide for so long, we are going out on the streets with so much pride,” said an emotional Lendi. “After all these challenges, we are still standing, standing proud. Because that is what our hearts are beating for.”

Mustafa also addressed the needs of LGBTI people who have been kicked out of their homes, as well as transgender people, lesbian women, bisexuals, as well as LGBTI Roma, Ashkali and Egyptians who are faced with the patriarchal system on a daily basis.

K2.0 spoke to seven participants regarding the importance of taking part in the parade and supporting the LGBTI community in society and politics. 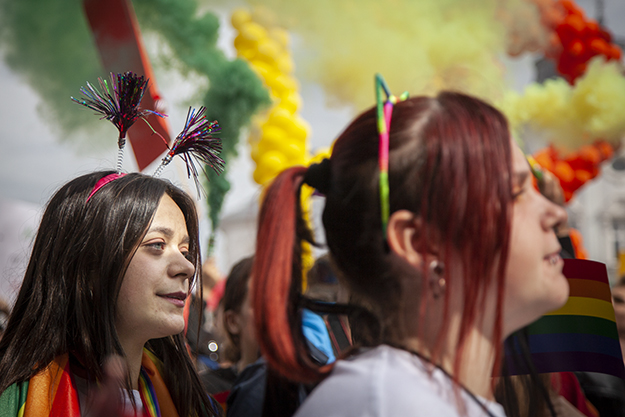 All people should understand that human rights are fundamental for all people and that no-one should be excluded, no matter what group they belong to. That is why for me, this parade promotes equality, love, acceptance, respect and diversity.

The Pride Parade increases the visibility of the community and shows that there are more than just heterosexual people in our society. Every citizen should understand that we have friends and relatives who love someone of the same gender, and that gender identity does not necessarily coincide with sex — and that all this diversity must be valued and respected.

I took part in three parades, but prior to that there were also marches. In 2014, for example, at the first march, very few people took part. I am sure that with each parade, the number of participants will increase.

I am not very involved in politics and the fact that I am not part of politics is a political act. I followed the recent electoral campaign, and I saw that a few deputy candidates gave statements about the community, but I don’t think they were essential statements. They were given more so on the spur of the moment. They positioned themselves as neutral, that they are neither supporters nor opposers. And I think that politicians are not advocating enough for this issue. 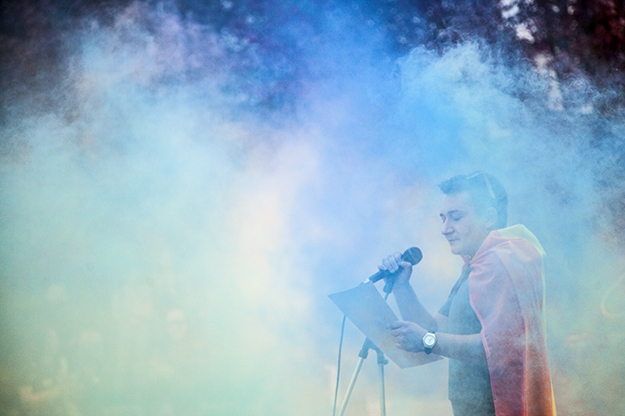 Historically, the pride parade is an important date, especially in Prishtina, where in the past the LGBTI community did not have the space and circumstances to be visible, and to show who they are. Now we have the opportunity to go out and show who we are and what we demand.

Compared to the first year, it is much more different. This year, many people came out openly and empowered themselves. We are empowering more and more each day.

LGBTI rights are basic human rights, and excluding LGBTI people is a huge injustice and very discriminatory. My advice is for people to read more and educate themselves, because these things are very natural, and so intolerance against the LGBTI community must be eliminated. 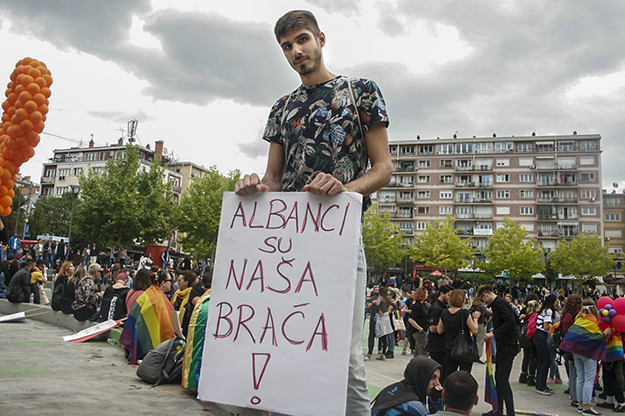 Filip Vulović, student and activist for LGBTI rights in Belgrade

The reason why I’m here is to show support and solidarity for the LGBT+ community in Prishtina and Kosovo, because I believe, as we all do, that we must work and cooperate to create a better future for people on both sides.

This banner says “Albanian men are our brothers.” We also have one in Albanian, which says “Albanian women are our sisters.” So this message goes beyond politics, beyond media, beyond socialization. We don’t want this to be seen as a provocation. We want to convey a clear message of love and common support, especially between youths of the two countries.

This is an ideal opportunity to show this type of support and solidarity, and to spread the message that there are people who don’t hate, who love, and [these people] are tired of the media, are tired of news that say that people here hate us and that we hate them here, et cetera. Their activists come to Belgrade and we come here every year, so what we do is a kind of tradition, to show our support for LGBTI rights and human rights, and to work towards a better future. 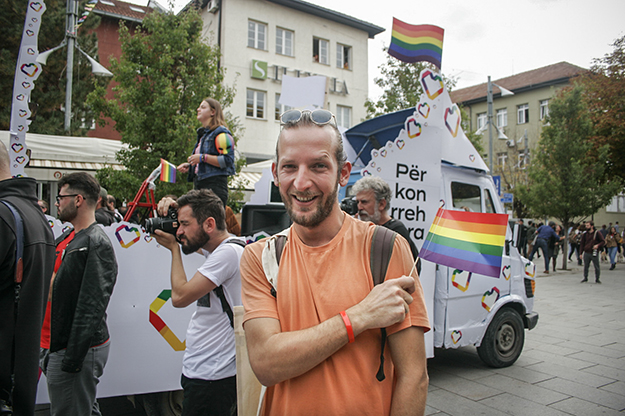 It is very good that the parade is being held for the third time. The entire concept of holding Pride Parades on the main square is very good. I say this because we are a patriarchal society, but we’ve had no incidents so far.

The importance of it is that it spreads information about LGBTI people, because most people are not informed that LGBTI rights are basic human rights. The more people that take part today the better, because earlier a press conference was held by political party FJALA, a conservative party that strongly opposes the parade, labeling it as evil and shameful for the country. I want them to read about LGBTI people as much as possible, to understand what these people feel.

Politicians have just about completely excluded these issues from their election campaigns. One instance where I saw that they were discussed was in a TV debate in which deputy candidates were asked to give their opinions about marriage between people of the same gender. Most of them positioned themselves as neutral and didn’t answer the question. However, Albin Kurti was the only candidate for prime minister who declared himself as a supporter of all people, regardless of their differences, regardless of sexual orientation. 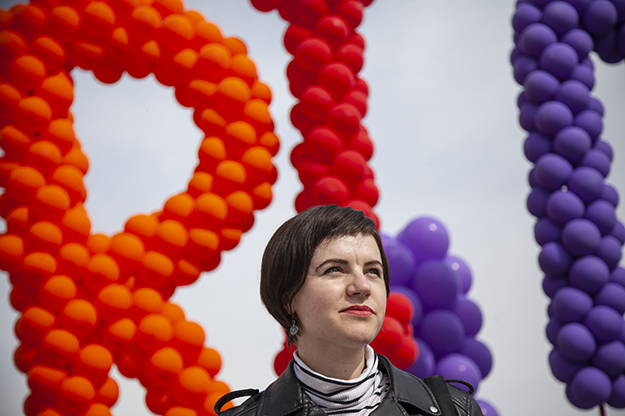 I see the parade as something that is very necessary because we really need to see groups that until now have had their existence denied. It is important to be out in public, to be visible and to convey the message that we are here and that we coexist.

During the election campaign, as far as I noticed, politicians tried to evade this subject because it is a bit sensitive. Some of them openly expressed their opposition, which makes them opponents of basic human rights. But there were also politicians who are supporters, but were a bit reserved because of the masses. 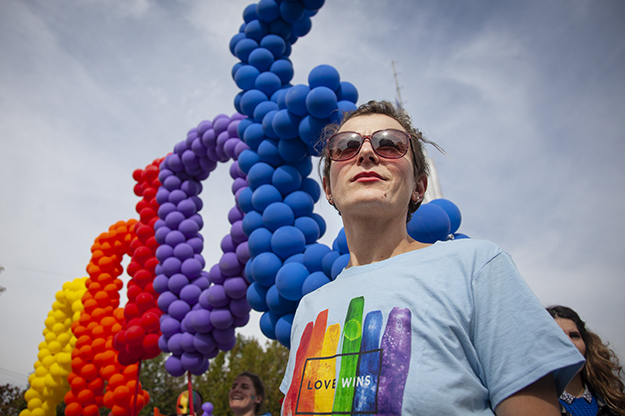 I think Kosovo is a country that has a lot of discrimination against the LGBTI community. Besides discrimination, there is also a lack of information about the LGBTI community, so that is why the parade is necessary. It strives to make people understand that we are all equal and that diversity is an asset, not a drawback. It is important to join the parade because it shows people that we are all equal and that justice is for all.

There are many different people who do not support LGBTI people. Uninformed people and those who hate the community must change their opinion or they will face opposition from the state and society. 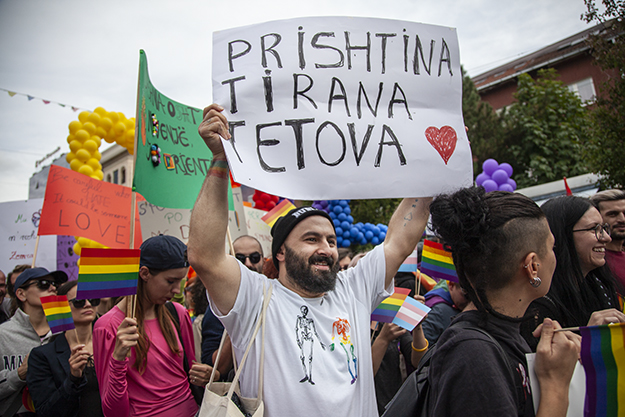 I see the parade as a rebellion of the LGBTI community, as a normal activity. All communities protest and raise their voice for their rights, and the Pride Parade is no different. This way, once a year, we march to show that we are here and that we exist.

Even people who don’t support the community should simply join the parade, because being LGBTI is very normal and is something that is part of society. They have to march, because any family can have LGBTI people, and with their presence, they can show that they would accept their relatives and that it is something very normal. K