Mohamedsalem Werad: Western Sahara is in two passive wars, liberating the country and building it

On Sunday (Aug. 6) at DokuFest, the Swedish filmmaking collective RaFILM gave a masterclass on the amateur filmmakers and activists working to document life in contemporary Western Sahara. Billed by the event as ‘Africa’s last colony,’ Western Sahara has been the subject of a territorial dispute between Morocco and the Saharawi people, represented by the Polisario front, ever since Spain withdrew in 1975.

For 15 years the two sides waged a guerrilla war, with the Polisario front declaring the formation of the Saharan Arab Democratic Republic (SADR) in 1976. To this day, Western Sahara remains divided by a buffer of fortifications and landmines that runs the length of the country — the longest minefield in the world — delineating areas controlled by the Moroccans and the SADR. Though a ceasefire was declared in 1991, refugee camps filled by Saharawi across the border in Tindouf in Algeria are still inhabited, with many living their whole lives in the camps

In Prizren, footage was shown of protests in Moroccan controlled areas of the country, footage smuggled out by an organization who have had three journalists arrested and three cameras stolen by the Moroccan authorities. Their crime seemed to be simply documenting what is happening — chiefly the beating of protesters, or children covered head to toe in bruises.

It is this environment that those trying to get their voice heard in the Western Sahara are working. Another guest of the masterclass was 32-year-old Mohamedsalem Werad from the blog Saharawi Voice, whose manifesto proclaims their mission “to show the world their suffering, and unmasking the human rights violations in the occupied territories.” Sadly, a rickety Skype connection meant that Werad often arrived at the masterclass as just a patchwork of silent pixels, so K2.0 caught up with him the next day to discuss the current situation for Saharawis across the divided regions.

K2.0: How did you become involved in Saharawi Voice?

Werad: I was born in a refugee camp and I always wanted to do something on the encampment and on the occupation. I didn’t see the international media doing that. Few people know about Sahara. It’s been happening for forty years now, but still there’s only a handful of people who’ve heard of this or the fact that it’s the last colony. There’s almost no chance that there could be a solution without support from civil society and human rights groups. That’s why I do what I do.

In one of your videos shown at the DokuFest masterclass, a young teenage boy called Hamdi, who was born in a refugee camp, says that “in a desert where no one would have the courage to build a country, we’ve built a functioning state in exile with all its institutions.” How has this parallel state in the camps formed?

We believe that we are in two wars that are passive: liberating the country and building the country at the same time. From the beginning we have believed that this is not something that is going to last forever.

That’s why the Saharawi have, even in very difficult environments, been prepared to build their own institutions and to be adaptive, so once they move [back] to Western Sahara they are just like a functioning state that can replace the occupation. We have ministries, the most important are education, defense, youth, sports, women and students. 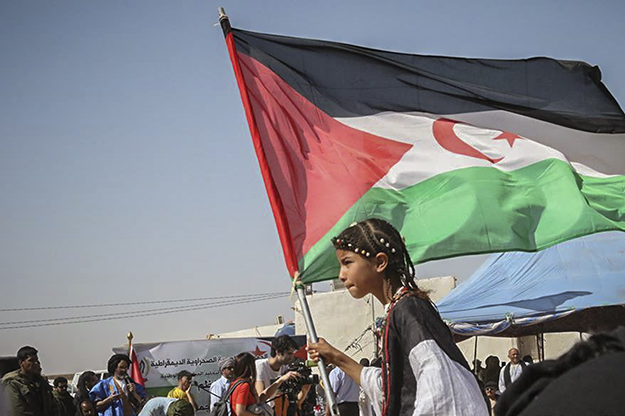 During the war, women are the ones who built everything because most of the men were fighting. They were relying on them to build schools, hospitals. Their contribution is huge, so the role of the organisation is to fight for their rights within society and within government. For example, for women to be able to and to be willing to go for high government jobs, to be parliamentarians, to be ambassadors, to be Saharan representatives.

On Sunday we heard a lot about the frustration levelled at the international community’s inaction.

From the beginning, there are some that have stood by the side of Morocco and have unconditionally supported the occupation from day one. We are talking about France, the United States, among many others.

If we talk about Saudi Arabia, it’s not like that would come as a surprise to many people. But those other countries, Western countries that define themselves with the customs of freedom and liberty and impartiality, if you try to teach that to Saharawi they would just laugh, because that’s not the case that we see. We see countries that are knowingly choosing to stand by Morocco. It’s an ally that’s willing to do a lot of dirty work for those countries.

"The United Nations is huge and has good potential, but it’s just a facade for those countries to do what they do."

With Canada and other countries, their companies plunder Western Saharan natural resources. It’s clear according to international law that that’s something illegal, as Sahara must benefit from those resources. Those companies are doing it anyway. They don’t care.

[In May, Panamanian authorities allowed a shipment of Western Saharan phosphate bought by a Canadian firm to continue to its destination, despite warnings that it had been mined illegally by a Moroccan state company. In 2016, Sweden backtracked on plans to recognize the country’s independence when Morocco blocked plans for Ikea to open its first Moroccan store.]

The United Nations is huge and has good potential, but it’s just a facade for those countries to do what they do. It’s just a reflection for their wills, so if they want something they can use the United Nations to channel that and to legalize their decision.

How do the divisions affect the lives of Saharawi families today?

They have been forced to choose between a rock and a hard place. In order to see a loved one, they have to accept living under occupation and a lot of people refuse to do that. It’s the price they pay, to be separated from their family. Many people are willing to do that, because they think that being able to decide their own fate is worth it. Of course it’s not something easy, and it’s not something people adapt to easily, but it shows how important it is for them to decide their country’s future.

It’s difficult to find someone who doesn’t have siblings or parents or cousins who don’t live on the other side of the wall. In 2005 I think it was, the UN had a program called CBM — “Confidence-Building Measures” — where they exchanged visits between the camps and the occupied territories, but for just five days. Imagine you are given the chance just to be with your brother for five days. If you want to live for the rest of your lives together, you either have to live under occupation or your brother or sister has to come and live as refugees.

I never got to meet my grandmother, she passed away four years ago but I never had the chance to meet her. I have two half-brothers and uncles that I never saw, and I’m 32.

You’ve written much about the ‘silent anger’ and the resistance to exposing pain and suffering to the outside world when nothing good can come of it. How do young Saharawi feel today about the future?

The majority are hopeful about the future, but there is also a group that feel powerless. They feel like they can’t do a lot as long as the war is not going on, in terms of armed struggle. They think that the peaceful negotiations are just a waste of time and, as youths, they can’t contribute to the situation.

"Our people would argue that talking and sharing our story won’t change anything. Our parents spoke with journalists and so on, and yet nothing happened, so why we should do the same?"

They don’t see it in terms of how close are we getting to our goal, which is to be able to assert our rights and self-determination. There are plenty of reasons to be disappointed. People find it frustrating that they don’t see what’s good for us. Our people would argue that talking and sharing our story won’t change anything. Our parents spoke with journalists and so on, and yet nothing happened, so why we should do the same? Change can only come when they take matters into their own hands in the armed struggle.

Are there Moroccan activists fighting for Western Sahara’s recognition, and how is it seen by people on the other side of the border?

Personally, I know literally a handful of activists who are outspoken of their support [for self-determination]. I have met three of them who have come and spent some time with the Saharawi and I appreciate their position.

It is not necessarily justifiable, but it is understandable because of the state funded propaganda. They have been brainwashed in schools, in the media, in everything, that Western Sahara belongs to them and that the Saharawis are undermining Moroccan sovereignty.

I don’t have statistics to show how many Moroccans support the Saharawis but from what I see it’s very few. I know it’s not an easy thing to do, because it’s considered one of the sacred subjects: the monarchy, the religion and Western Sahara. They are the real red line in Morocco.

How do you feel about the future of Western Sahara? Are you hopeful that it’s going in a positive direction?

I think the future will be hugely decided by how much work we do out of Saharawi and by international relationships. Countries that are interested are shifting. As they say, ‘there are no friends forever, no enemies forever.’ I’m hopeful from that perspective.

Maybe it’s slow, but I believe that there is no way that after what they gave and sacrificed, that it’s not going to happen. The Saharawi will exercise their right to self-determination; they will have their country that they wish. And it’s not just wishful thinking but I think this is a fact based on the work and the dedication of the people there. It’s what they’ve worked to see.K