The Ministry of Health announced on Monday (April 13) the introduction of new measures to combat the spread of COVID-19 in Kosovo, following a surge in confirmed cases. Seventy-nine new cases were confirmed by the Kosovo Institute for Public Health the previous day, marking the highest number of new cases confirmed in a single day since the first cases were confirmed exactly a month ago.

In response, local mayors and the Ministry of Health also announced that the municipalities of Prishtina, Ferizaj, Prizren and Suhareka, as well as one neighborhood in the village of Burojë, Skënderaj, are quarantined, prohibiting everyone besides essential staff from entering and leaving these locations; Malisheva, North Mitrovica, and Zvečan have already previously been quarantined.

The new Ministry of Health measures* will last until May 4, and will be reviewed no later than April 30.

From Wednesday (April 15), residents will be prohibited from leaving their house or apartment, except for limited specified purposes.

Each resident will be restricted to a specified 1.5 hour time slot in which they are permitted to go outside to buy food, medicine, or to carry out financial tasks. The designated time slot is determined by the penultimate digit (the one before last) of citizens’ personal numbers on their ID cards, or passport numbers if they don’t have ID cards; for foreign citizens it is determined by the penultimate digit on their passport number or ID cards. 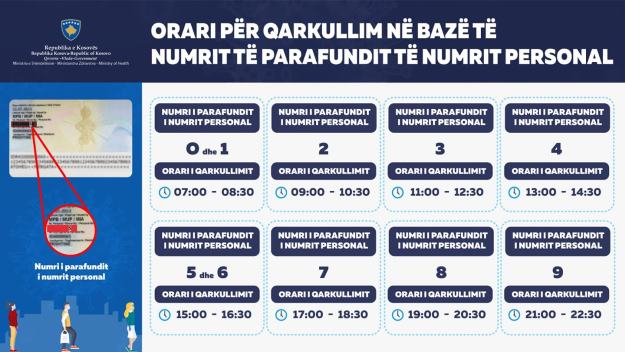 People with disabilities and those under the age of 16 are allowed to be accompanied by one person when they go out, while others must be alone. People above the age of 65 are recommended to stay home at all times, barring emergency or “necessary” situations.

While outside, citizens must keep their mouths and noses covered with a “mask, scarf, or other cover.” The requirement to maintain a 2 meter distance from other people remains in place.

Minister of Health Arben Vitia said in a press conference on Monday that the institutions consider the amount of citizens permitted to go out in any specific timeframe — 40,000 — to be “manageable.”

“The measures may seem rigorous, but experience from other countries has taught us that if we do not act now, it may be too late and after a while we will again be forced to take these measures, but at a much higher cost to the lives of our citizens,” he said.

Following confusion from citizens on social media as to how those only allowed to leave during evening or night time slots would carry out their essential tasks — when businesses such as banks will be closed — the Ministry published further official information explaining that the allocated time slots would change every three or four days.

The decision exempts certain economic operators, a list of which were subsequently published late on Tuesday night, and the essential staff of institutions “only to meet the needs of the institutions.”

Fines ranging from 1,000 to 2,000 euros may be imposed for individuals who violate the measures.

The circulation of vehicles is also prohibited, with some specific and limited exceptions.

Special permission can be granted “to meet the needs of economic operators” or “to carry out the needs of the state institutions,” and the transport of goods and services to ensure the functioning of the supply chain will continue. However, only one passenger — in addition to the driver — is permitted per vehicle.

Exceptions to the ban on vehicles apply where it is “strictly necessary” to care for patients or people with disabilities, and in medical emergencies.

The new restriction on movements does not apply to people experiencing domestic violence who are allowed to go out in order to “seek refuge in an alternative location.”

Kosovo now has 377 confirmed cases of COVID-19, of which 63 people have recovered and eight people have died.

According to the Ministry of Health, 54 of the people confirmed are receiving treatment in the Clinic for Infectious Diseases in QKUK; 41 are in a stable condition, 10 in a serious condition, while three patients’ conditions are described as “critical.”

Vetëvendosje (VV), which won the elections in October, believes that new elections should be held as soon as the pandemic is over, whereas the other parties support the formation of a new government without new elections.

On Friday (April 10) President Hashim Thaçi sent a second letter to VV, asking them as winners of the last election to nominate a prime ministerial candidate. Thaçi wrote that he has held consultations with political parties aiming to assess their interest in either new elections or the formation of a new government, and that his constitutional mandate as president obliges him to guarantee “the democratic functioning of institutions” and to ensure the appointment for a new prime ministerial candidate.

“As President, I will undertake this action, following all constitutional steps so that the citizens of the Republic of Kosovo can have their new government as soon as possible,” he wrote.

On Tuesday, LDK’s General Council voted in favor of a possible coalition with AAK, Nisma and AKR.

In a reply to Thaçi on Monday (April 13), VV’s leader and acting Prime Minister Albin Kurti wrote that last month’s motion of no confidence in the government “doesn’t differ formally and materially from previous practices.” He added that forming a new government without elections would be a “double standard that you and the political parties are trying to impose in an unconstitutional way.”

Some legal experts and analysts have said there is no deadline for the winning party to nominate a prime ministerial candidate to the president, and that the present situation with an acting government could continue indefinitely.

However, President Thaçi has spoken of forming a “unity” government and some analysts believe that based on his statements he is preparing to offer the right to nominate a new prime ministerial candidate to the party that came second in October’s elections, the Democratic League of Kosovo (LDK).

On Tuesday (April 14), LDK’s General Council voted in favor of a possible coalition with the Alliance for the Future of Kosovo (AAK), Nisma, the New Kosovo Alliance (AKR) and the parties representing minority communities. Mustafa reportedly said that talks and finalization of such a coalition would take place after VV had exhausted all constitutional possibilities for forming a government.

Senior AAK figure Muharrem Nitaj has said in a Facebook post that if LDK receives the mandate to form a new government from the president, AAK would support it “without hesitation.”

“We could be part of this government, if this is asked of us,” he said.

Amongst the ongoing stalemate, the Kosovo Assembly held an extraordinary session on Tuesday (April 14), after opposition party Democratic Party of Kosovo (PDK) proposed a draft resolution with its own package of measures to deal with the impact of the pandemic.

The party also criticized the restrictive measures taken by the Ministry of Health on Monday, and suggested that introducing such restrictions had already been found to be unconstitutional by a recent Constitutional Court ruling relating to the government’s pandemic response.

“This outgoing government has again undertaken, in an arrogant manner, the same unconstitutional decision to restrict the freedoms of citizens, when such a thing can only be done with a special law coming out of the Assembly of Kosovo,” PDK said in a press release.

LDK leader Mustafa also condemned the new government measures in a Facebook post: “The decisions that the incumbent Prime Minister read to us last night on the ‘historic night’ through the mouth of the Minister of Health, are worrying. They transcend any boundaries of a democratic state,” he wrote.

“I have no doubt that PDK, as the initiator of this [Assembly] session, has not prepared a proposal of the financial package with good intentions, but with these draconian measures of this government in office, no package works. The only reasonable package is for this government and governing logic to go quickly, to create a new government which together with the Assembly will take the necessary measures to overcome this situation we are in.”

“The [existing financial] package isn’t intended to be long term policies to stimulate the recovery of the economy; for that, a deeper study will be carried out.”

At the beginning of Tuesday’s extraordinary Assembly session, PDK proposed the consideration of two new draft laws, which it said would help address the economic and social impact of the pandemic to the tune of 320 million euros. The head of PDK’s parliamentary group and former Minister of Finance Bedri Hamza said that the proposal was aimed at enabling institutions to create a legal basis “to help low-income employees.”

However, president of the Assembly Vjosa Osmani ruled that a vote on the draft laws could not take place as it had not been foreseen on the agenda, and that procedures do not allow for changes to the agenda of extraordinary sessions. After a short debate, PDK withdrew its proposal to review the new package.

Ahead of the session, acting Prime Minister Kurti and acting Minister of Finance and Transfers Besnik Bislimi held a joint press conference in which they said that an emergency financial package issued in recent days by the acting government would not be the only one, as another package will be issued later, specifically for the private sector.

“The [existing financial] package isn’t intended to be long term policies to stimulate the recovery of the economy; for that, a deeper study will be carried out and a second package will be implemented to address the long term needs of the private sector,” Kurti said. “[The existing one] is an emergency package, because we are in a health emergency situation.”

Across the Atlantic, scrutiny of the Trump Administration’s treatment of Kosovo and criticism of its perceived role in the dismissal of the short-lived government has been stepped up.

On Monday (April 13), representative Elliot Engel and senator Bob Menendez — the chair of the Committee on Foreign Relations in the House of Representatives, and the ranking member of the Senate Foreign Relations Committee, respectively — wrote a letter to Secretary of State Mike Pompeo expressing concern at the Trump administration’s “heavy-handed” tactics used toward Kosovo’s democratically elected government.

The two senior Democratic lawmakers particularly questioned the administration’s pressure on Prishtina in the context of Serbia’s attempts to delegitimize Kosovo through its “derecognition” campaign and said that “U.S. public pressure on Serbia appears to have been dropped.”

According to them, the lack of balance between Prishtina and Belgrade from the Trump administration takes place in the context of “Serbia expanding ties with Moscow and increasing imports of Russian armaments,” transactions which they say require the U.S. administration to impose sanctions on Serbia under the Countering America’s Adversaries Through Sanctions Act.

“Please inform us why the administration has neither imposed those sanctions nor actively pressured Serbia to end its global efforts against the recognition of Kosovo’s independence,” reads the letter.K