The month of strikes

K2.0 discusses strikes in the education and healthcare sectors.

On Thursday (January 31), K2.0 brought people together in our latest Small Talk to discuss the strikes that were held in January by education and healthcare workers. The strikes were announced by the unions of the two sectors, which demanded an increase of the wage coefficient in the draft law on salaries, which defines the system of wages and rewards for public servants.

Specifically, these demands came as a result of an strong increase in wage coefficients in certain public sectors, including in high level state institutions such as the Prime Minister’s Office, the Presidency, the judicial sector and other institutions. Meanwhile, the draft law on salaries foresaw that teacher’s wages would be maintained at a coefficient below three, and for medical staff at a coefficient from one to five (out of 12).

One day after the discussion, on February 1, the Union of Education, Science and Culture (SBAShK) agreed to put a stop to the three week strike and restart the teaching process. This happened after they reached an agreement with the government to increase the wage coefficient for teachers by 20 percent — although they initially demanded a 30 percent increase. Meanwhile, the Federation of Health Syndicate is still on strike.

K2.0 formed a panel to discuss the issue, inviting Dukagjin Pupovci, Director of the Kosovo Education Center (KEC), and journalist Saranda Ramaj from Koha Ditore. The discussion was moderated by KTV journalist Xhemajl Rexha. Blerim Syla, Head of the Federation of Healthcare Syndicates, as well as representatives from the Prime Minister’s Office and SBAShK, confirmed that they would participate in the discussion, but did not show up.

Journalist Rexha kicked off the discussion, which focused on three issues: the participation of the University of Prishtina in the education strike, the influence of the strike on the secondary education level, and the fact that the healthcare sector is participating in a massive and organized strike for the first time. In this regard, Rexha criticized the lack of government representatives in the discussion.

“From the 35 advisers to the prime minister, none of them found the time to discuss an issue as crucial as the paralysis of the education system in the country,” Rexha said. 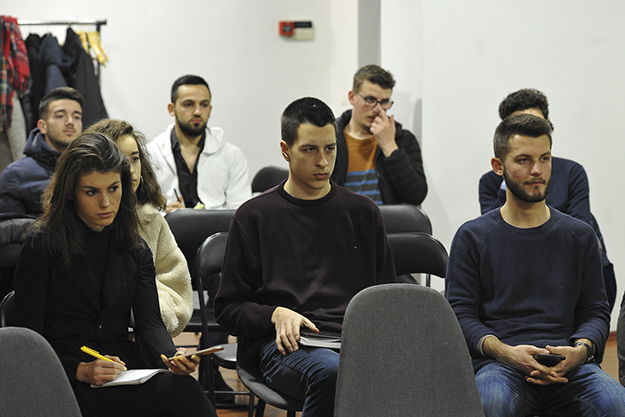 On January 15, the University of Prishtina reached the decision to join the strike and suspend classes in support of SBAShK’s demands. Pupovci labelled the UP’s decision to join the strike as “hypocritical.” According to Pupovci, the wages of university professors are “relatively high,” with a regular professor receiving a 1,400 euro monthly wage. Furthermore, the former mathematics professor at UP said that university professors can at times receive additional wages for additional working hours.

Pupovci said that two strikes were being held in the education sector — one in support of the syndicate’s demands for wage increases in the medium and lower sectors, and one which is being led by the UP rector and six rectors of other public universities, who demand the dismissal of the State Council for Quality, as well as of minister Shyqyri Bytyqi, with the justification that 42 programs in these universities are not accredited.

“No law states that the rector can call strikes,” Pupovci said. “The law on strikes determines that strikes can be called by syndicates, but in this case, rectors have called the strike.”

After discussing the strike in the higher education sector, moderator Rexha shifted the focus of the conversation to the health care sector, conversing with journalist Ramaj who has covered the sector for the past six years.

“It’s the first time that the union has had an actual reason to go on strike,” she said, referring to their demand to increase the wage coefficients. Rama recalled a time when the syndicate had gone on strike when round 100 cardiological doctors were being investigated for the “Stent” case in 2016. The doctors were accused by the prosecution of bribery and cooperation with private health care institutions, namely for taking patients to be treated in these institutions.

For Ramaj, at that time the strikes showed the syndicate’s frivolous approach, but those strikes differ from the current strike, which she says includes a reasonable demand for wage increases. 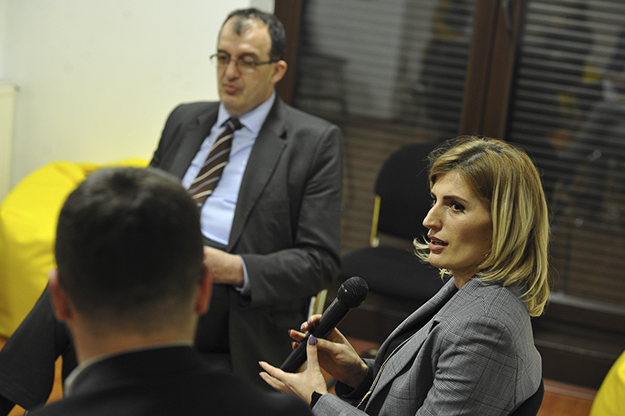 After the introductory statements by each panel member, the moderator opened the debate to other attendees.

The first to join the conversation were some students of the secondary level. A 16-year-old high school student said that he was discontent that the winter holidays that were supposed to have lasted two weeks had been extended to one month. According to the student, the strike was being held “for their [the teachers’] interests, and the students are being ignored.” He went on to say that the focus should be on quality and on improving conditions in the education system.

A student at the Xhevdet Doda gymnasium in Prishtina said that the strike is not the way to solve issues, and that the teachers should rather take steps that would not influence students.

Pupovci responded by saying that it is clear that tension has been created between teachers, students and parents — with the latter feeling disappointed by the strike in the education sector. Pupovci said that perhaps SBAShK shouldn’t have rushed to go on strike, since it could have held discussions with the government.

However, despite everything, Pupovci was convinced that, this time around, the demand to increase the wage coefficient for teachers was reasonable and could be a basis for reforming the education system in Kosovo.

Although the teaching process has restarted throughout the education system, strikes in the health care system are ongoing, due to discontent over wage levels.K