Two recent murder cases involving women has sparked revolt amongst a group of students in Albania, who organized a protest “against the killing of women in girls” in front of Tirana Police Department on Saturday, June 16.

A small crowd, which grew larger from passersby drawn to the cause, displayed signs aimed at law enforcement officials as well as society at large. One of the main themes of the protest was to stop treating women as men’s property, and therefore dispelling any notion that men have the right to kill women if they choose to leave them.

“Oh Romeo, why do you kill Romeo?” and “Killing doesn’t make you brave, it makes you a murderer,” were a few of the many signs related to the two recent cases, in which men killed young women for rejecting them before going on to commit suicide. The media had labelled the cases as ‘crimes of passion,’ something the protesters believe to be confusing murder for love.

The protesters also drew attention to the fact that some people had justified the acts and blamed them on the victims. Stuck to a black sign were comments on social media insulting the victims, which were read out loud to the crowd. 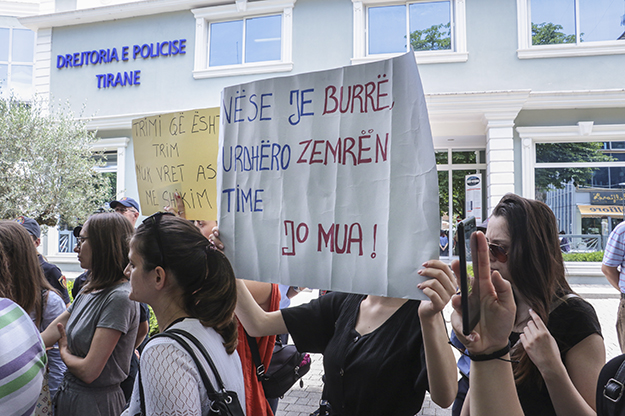 Protesters gathered outside the Tirana Police Department as they feel law enforcement officials are not doing enough to protect women from violence and murder. Photo Angelo Haruni / K2.0.

Arjola Hajdini, one of the organizers of the protest, told K2.0 that the location outside the Tirana Police Department was chosen as organizers believe that law enforcement officials could do much more to prevent these crimes from happening. She referenced the case of Fildes Hafizi, a judge who was murdered by her ex-husband last year, despite having a protection order out against him.

Following Hafizi’s murder, the Albanian Parliament adopted a resolution last December to step up the mechanisms for preventing such crimes. However, more than six months later the problem persists.

The organizers of the protest told K2.0 that they needed to take the matter into their own hands seeing how little was being done, and organized on social media. They blame politicians on all sides as responsible for the current scale of femicide.

One of the protesters, Joridana Hoxha told K2.0 that: “I’m here to make sure nobody ever undermines my freedom. I will do anything to make sure of that, because the police today doesn’t enforce the restraining orders.”

Protecting women from murder and violence

As part of the issues relating to protection of women from femicide, protesters highlighted a lack of police action regarding domestic violence, which can also have fatal consequences.

“We demand that the police take in to more serious consideration reported cases of domestic violence,” Hajdini told K2.0. “On many occasions they didn’t even show up after a call for help, or they just interrogate the suspects shortly and release them on verbal promises not to repeat the abuse.”

Accusations of police negligence regarding domestic violence surfaced last year, with the case of an Australian woman living in Tirana, who was physically assaulted by her Albanian boyfriend.

She alleges that when she went to the nearest police station, the officers tried to convince her to drop the charges. She told an investigative TV show that she didn’t get any help with a protective order, but what she did get was an invitation to enjoy Tirana’s nightlife with one of the policemen, who kept messaging her for days afterwards.

Domestic violence remains a serious concern in the country due to many factors and is something the European Commission noted in its report released in April. Last year, 3,243 cases of abuse were reported, however many consider the real number of victims to have suffered domestic violence to be alarmingly higher.

According to official data, protection requests and recorded reports from the police have increased during recent years, while deaths have dropped from 28 murders in 2013, to 13 murders in 2017. Last year however, 129 of these protection orders were not respected. 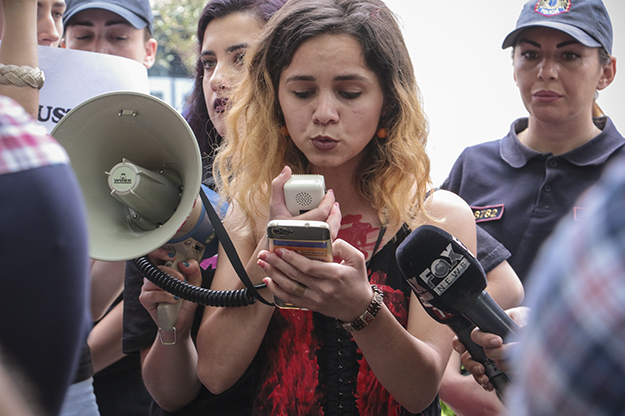 Entenela Ndrevataj, one of the organizers of the protest, points to the fact that punishments for people committing domestic violence are too lenient. Photo by Angelo Haruni / K2.0.

Entenela Ndrevataj is another of the organizers of Saturday’s protest, who painted herself symbolically in red paint for the event. She believes that there are many to blame for the situation regarding women’s protection, but highlights the judiciary especially.

“The sentences for people who commit domestic violence and are potentially dangerous are extremely short or sometimes rule in favor of the aggressor, who is released and allowed to continue inflicting violence,” Ndrevataj tells K2.0.

Xhoni Merkohasanaj, another of the protest organizers, references cases in which the victim and the aggressor have been allowed to live in the same house due to economic poverty, something widely believed to cause the violence in the first place. “These women, who have already a protective order which doesn’t work and places them in the same house with the violators, they aren’t protected,” he told K2.0. “Danger lives under the same roof and the chances of being a victim again are very high.”

Saturday’s protest was also joined by many men, who came up front to appeal for awareness over issues surrounding domestic violence in particular. “Why aren’t more women here today? Why aren’t there more men? Why aren’t any politicians present?” a man in his 50s asked the crowd. “Is there no Albanian who doesn’t have a mother, sister or daughter that hasn’t suffered from domestic violence?” he continued. 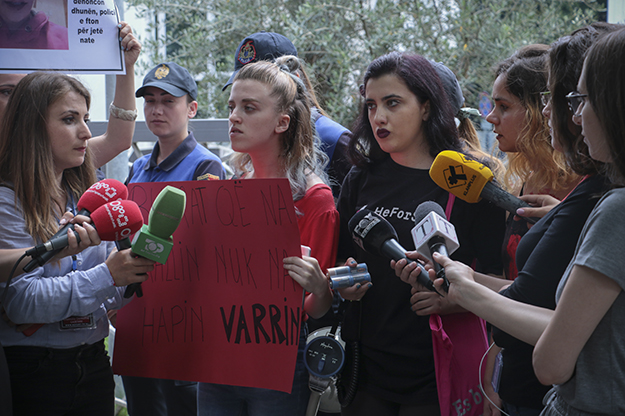 In the days following the protest, more violent incidents occurred across Albania, and the group behind the demonstrations plan further action. Photo by Angelo Haruni / K2.0.

In the days following the protest two further incidents surrounding domestic violence occurred in Albania. On Sunday morning (June 17), a 35-year-old woman shot her husband four times, killing him instantly, in the middle of the market in Milot, a small town in northwestern Albania. Interrogated by the police, the woman claimed she murdered her husband because he gambled and mistreated her.

Less than 24 hours later, in Memaliaj in southern Albania, a 65-year old man attacked his wife, hitting her with a hatchet. The gravely injured woman later declared to the media from the hospital bed that she is confused on choosing between forgiving him or leaving him in jail. “I’m afraid he’ll kill me,” declared the 57-year old.

The group of students that declared Saturday’s protest is dedicated to continuing its demonstrations and demanding for more action to be taken, until women feel safer and murders can be prevented. They feel change will not come easily, but hope words like “Love gives life, it doesn’t take from it,” might find a way to reach out to society.K