My.Kali: A voice speaks up

By 2006, Khalid Abdel-Hadi was already very keen on writing and was repeatedly sending his pieces to various magazines to be featured. But the young man from Amman was met with rejection based on his age — he was only 16 years old.

It was a time in which he needed to dig deep on the internet in order to find stories about gender, identity and sexuality. And he felt himself the need to express himself, a need that was soon to be translated into one of the first magazines in the Arab world dealing with LGBT persons and issues.

After many rejections, he decided to take things into his own hands.

“Screw it, I am going to open my own magazine,” Abdel-Hadi recalled his decision last week at K2.0, where he was the guest of the organization’s latest edition of Volume UP. In conversation with K2.0’s Cristina Marí and with the audience, he spoke about how he founded the magazine, and about its content and importance for the queer and other less visible and silenced communities across Arabic speaking countries.

In 2007, the then 17-year old Abdel-Hadi published the first edition of My.Kali online together with other friends, wanting to leave the mark of their own voices. My.Kali was first published in English, and did not aim for fame. Despite this, however, it quickly reached a level of notoriety its creators hadn’t predicted.

Abdel-Hadi later understood how the controversy created by the media was used and politized for electoral purposes by political parties.

Abdel-Hadi featured on the cover of the first My.Kali edition, and within a short time of the private launch party, his name was all over Jordanian tabloid media outlets.

Being outed as the “gay” founder of what was presented as “the first Arab LGBT magazine,” the coverage about him and My.Kali focused popular attention shortly before parliamentary elections took place in Jordan. The sensationalist media took different forms, from blurring out Abdel-Hadi’s face to naming the picture “gay pornography.”

“[While] we were sharing it privately online, they [the media] created this hoax about a ‘revolution of faggots’ and a ‘conference for LGBT people’ in Jordan,” said Abdel-Hadi. “So that was sort of the headline. And the picture of the cover was there. And we did not have the space to respond, because social media was almost nonexistent in 2007.” 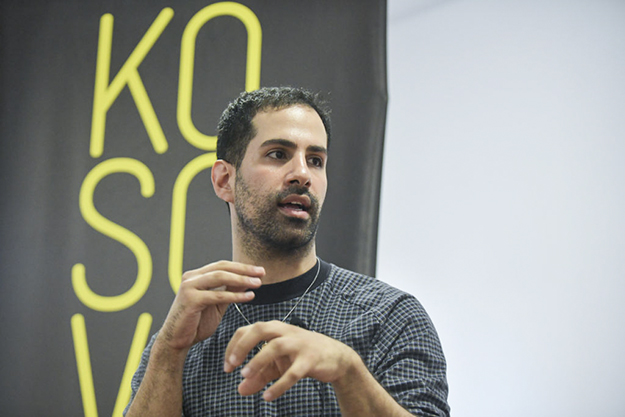 Abdel-Hadi later understood how the controversy created by the media was used and politized for electoral purposes by political parties, who competed on who would be better suited to “abolish that kind of mentality in Jordan,” he said.

“And there were no Arabic platforms who are willing to write about homosexuality, specifically LGBT, in an objective and neutral way,” he said. “So it was only them. Versus us. And we couldn’t respond to that.”

But all this noise and the rocky start didn’t affect the magazine’s future. Gradually, it evolved into an important space in which to discuss gender, sexuality and (post-)colonialism.

“It is a voice for social justice in oppressive societies,” reads the description of the magazine. “My.Kali builds on the understanding that cultural stereotypes stem from countless factors and discourses that are created and reinforced every day. My.Kali addresses these stereotypes through visually engaging features and social commentary with a local and regional flavor.”

The team at My.Kali try to demonstrate diversity and the combat against repressive forms through art and visual innovation. A large number of bloggers, writers, photographers and other artists from the Middle East and North Africa come together to write about less visible individuals in the mainstream, regional, pop cultural and underground scenes, while attempting to introduce new artistic and political concepts and to be inclusive, regardless of identity.

Usually, the magazine issues are centered around a particular theme. At Volume UP, Abdel-Hadi argued that a single topic can be treated from various perspectives.

“For instance, voice. When you say the word ‘voice,’ it has so many different definitions and different dimensions,” he said. “Everytime when we would mention a certain theme we were about to investigate for the upcoming issue, many people [would] already have an interest in this kind of aspect. If someone would have an interest in the issue of voice they would say ‘oh great idea, I would like to submit to this publication.’”

Abdel-Hadi and the team pay a lot of attention to who they place on the cover, trying to showcase alternative individuals who are not necessarily known to the society.

A glimpse into My.Kali’s covers shows the diverse voices and backgrounds that find their way into the magazine: The 2009 September issue features the Syrian model Ammar; the February 2012 issue features the Jordanian singer Rania Kurdi; the March/April 2015 features a Jordanian trans woman named Sarab.

“There is an excuslity to who is being on the cover. We reclaimed that,” he said. “And wanted to produce covers and give them to upcoming artists, actresses… and individuals, whose stories could affect the society and could have an impact on society.”

Abdel-Hadi also tries to hold a conversation about the effects of colonialism through My.Kali.

A particularly striking cover features a young man called Rashed, a trans man who had breast removal surgery in Jordan. The portrait shows him topless, revealing his surgical scars.

“We thought his story to be a positive story that deserves recognition,” he said. “He is not a celebrity, an influencer, but a regular person. He doesn’t have a certain platform but he has his story.” 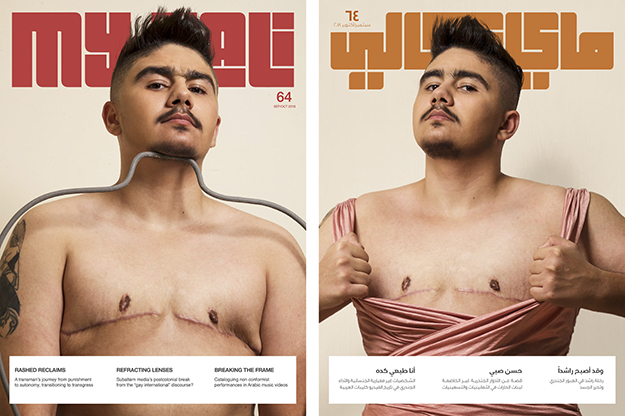 Rashed is a trans man who underwent breast removal surgery in Jordan, and was featured on the cover of My.Kali. Photo: Courtesy of My.Kali.

Abdel-Hadi also tries to hold a conversation about the effects of colonialism through My.Kali, discussing subjects such as how labeling, using western terminology, affected queer and non binary communities in the Arab world.

“Specifically in the region, there was no LGBT terminology in that sense… It was just labeled  ‘sexuality.’ We were not saying ‘this is that…’ That was sort of imposed,” he explained. “So when we speak about these things, we understand the aftermath and how we are deconstructing, how we are trying to break free from that now. And it’s part of our understanding and part of our conversation all the time.”

He said that it is this Western terminology that has added fuel to the backlash against the queer community in the Middle East.

“You hear all the time, when the Middle Eastern people talk about homosexuality like it’s just an idea from the West. ‘They [the west] have an agenda. They brought it to us,’” he mimics. “When they speak like that, it sounds hysterical. It doesn’t sound right. But at the same time, that sort of ideology comes from the labeling.”

After a decade of linking queer and non-binary communities across the Arab world while struggling with the repeated threats, Abdel-Hadi and his friends decided to extend their impact. In 2016, My.Kali saw its first Arabic-language publication.

In an interview, Abdel-Hadi said that this calculated decision was made to reach a much wider audience, that isn’t restricted to the more educated, English-speaking segment of society.

The first Arabic edition of May/June 2016 reached an unprecedented amount of readers, which led the Jordanian government to block their website.

The campaign of opposition against the publication reached its peak when one of the government’s Members of Parliament, Dima Tahboub, uttered repeated homophobic statements against My.Kali. Eventually, the magazine published an open letter in response to the MP’s statements.

Over the years, My.Kali has provided a valuable space for discussion, particularly for queer religious people, such as queer Muslims and Christians.

“The letter addressed the dangers of spreading hate toward social minorities, the responsibility that comes with being an MP and the need to respect and listen to those who differ from you and what you represent,” Abdel-Hadi said in a 2017 interview.

At K2.0, Abdel-Hadi said that crucial to My.Kali’s editorial policy is to produce content that also draws links with individuals who identify themselves within a binary framework, as cisgender (identifying their gender with their birth sex) and heterosexual.

“So we try as much as possible not to make the publication too intimidating to people who are not identified as LGBT people, so they don’t feel like ‘this website was not for me,’” he said.

Over the years, My.Kali has provided a valuable space for discussion, particularly for queer religious people, such as queer Muslims and Christians. The platform enabled a conversation to emerge that was hardly being enabled anywhere else in the Arabic-speaking world, such as, for instance, discussions surrounding the juxtapunction of religion and sexuality.

In 2016 Khalaf Yousef, a sheikh, came out as homosexual in a YouTube video that went viral. At this time, he was already in his second marriage to a woman. After strong backlash both from the Jordanian ministry and his own family, he fled the country to ensure his own safety. He named My.Kali’s cover with Abdel-Hadi as a final trigger for his decision to come out.

The interview for My.Kali in which Yousef discusses his relationship with his family and his religion became one of the most read stories in the Arabic language edition. This kind of impact and influence on people’s lives is what My.Kali and Abdel-Hadi aim to achieve.K