Protesters in Prishtina today continued their demands for justice for Astrit Dehari, the 26-year-old medical student and Vetevendosje activist, who died in custody 19 days ago. More than a thousand protesters — many wearing badges with Dehari’s face on or holding signs demanding justice — gathered around the steps of the National Theater in Skanderbeg Square to hear speeches by three of the civil society organizers. As the speeches came to an end, with an acoustic version of Albanian rock band Jericho’s “Nentor i ftohte” (“Cold November”) echoing sombrely around the square, those gathered solemnly processed down the length of the Mother Teresa Boulevard to Zahir Pajaziti Square.

Dehari died on Nov. 5 while being held at Prizren Detention Center, where he had been detained without charge — and without having been questioned — for 68 days, after being arrested in August for alleged involvement in an attack on Kosovo’s Assembly building. The official autopsy report into his death found that he committed suicide with the cause of death being “asphyxia — respiratory failure due to the closure of upper respiratory pathways by a strong tool.” Prizren’s chief prosecutor, Syle Hoxha, has insisted that investigations will continue until the full details of Dehari’s death are explained.

However, trust in the official version of events has been undermined by contradictory information that was released by state institutions in the days following Dehari’s death.

While previous protests have focused on a general call for #DrejtësiPërAstritin (#JusticeForAstrit), today’s protest had three specific demands: the immediate opening of criminal procedures into those responsible for failing to ensure Dehari’s safety while within a state institution; the dismissal of those officials — both within the detention centre and after Dehari’s death — who are considered to have mishandled the case; and the resignation of the ministers of justice and internal affairs.

Civil society activist Aulona Mehmeti described these measures as the least that they could do for Dehari, but also as pre-requisites for Kosovars to be able to say that citizens are treated equally by the law and justice system.

Nurije Demalia, a close friend of Dehari’s gave a short speech in which she said that, “Astrit died in the hands of this justice system. He was jailed and held in detention 68 days without any indictment. On the 68th day he came out of jail, but as a dead man.” 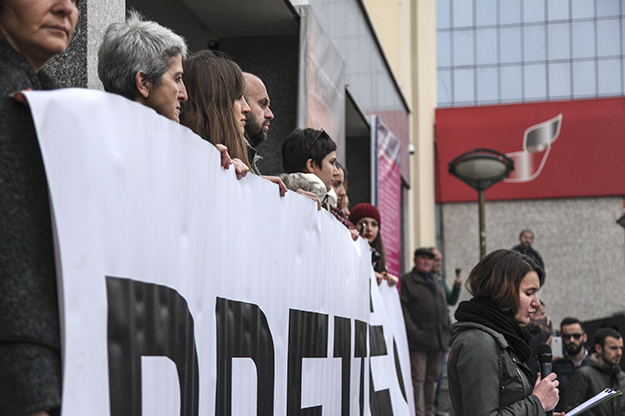 Zana Gojani, a Vetevendosje activist in the protest also knew Dehari personally. “He was selfless, giving, good, loving, smart and brave,” she told K2.0. “Apart from that, there are many other reasons for us to protest … He was supposed to be safe in prison — it was an injustice that he was there — and his fate mirrors the whole way in which the whole system in Kosovo works. Exactly what happened to Astrit eventually will, in a larger scale or a smaller scale, happen everyday to every one of us.”

Gojani insisted that she has no faith in the official version of events and that an international independent investigation is the only credible way to ensure justice. “He was supposed to be safe in prison,” she said. “We want to know exactly what happened.”

A petition setting out the demands was launched, with protest organizers hoping to gain the 10,000 signatures that are required to trigger a debate in the Assembly. “We are trying to highlight the difficulties and the problems that are in our justice system first and foremost and we think that someone should be held responsible for what happened inside that prison — for the death of Astrit,” Rudine Jakupi, a volunteer helping to collect the signatures, told K2.0. “We want to ask for justice, and that means an independent investigation for this case.”

The petition will be distributed around other municipalities, in addition to being available to sign in the center of Prishtina, over the coming days. 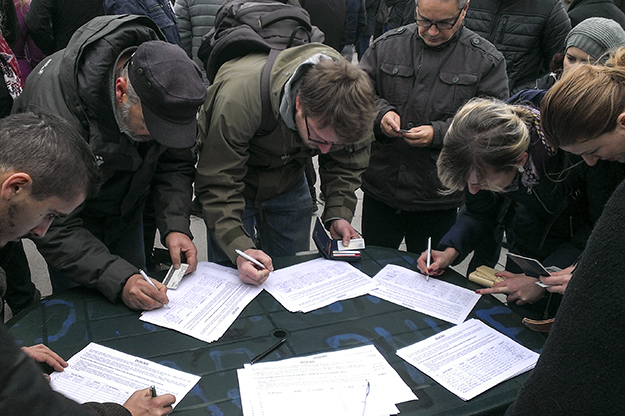 A petition with the protesters’ demands was launched, with organizers hoping to gain at least 10,000 signatures. Photo: Jack Butcher / K2.0.

Anger and mistrust in the government has intensified following what many believe to be a mishandling of the case and a slowness to embrace calls from citizens and human rights organizations for an independent investigation into the circumstances surrounding Dehari’s death. To date the prime minister, Isa Mustafa, has spoken publically just once about the case. “I ask for Kosovo’s institutions to take all of the independent actions in order to verify all the circumstances that happened,” he said in a meeting of the government on Nov. 7, while he also wrote a post on his Facebook account on Nov. 15. President Hashim Thaci has meanwhile made no public statement on the case, although he did write a letter of condolences that was rejected by Dehari’s family.

Last week civil society activists sent a letter to international human rights organizations, including Amnesty International and Human Rights Watch, calling on them to use their advocacy initiatives to demand a full, independent investigation.

On Tuesday, 17 days after Dehair died, the acting head of the Prizren Detention Center, two supervisors and one correctional officer were suspended from their positions.

Last week the Ministry of Justice sent a request to the British Embassy for the Metropolitan Police to investigate Dehari’s death. However the request was declined, with British Ambassador Ruairi O’Connell saying that it was the responsibility of local institutions to investigate fully and implement urgent reforms in order to restore trust in Kosovo’s rule of law system.

However, many protesters believe that Kosovo’s state institutions are so tainted that the only way to now guarantee an independent investigation is for it to come from abroad. “They cannot be a part of that investigation, they should be separate from that investigation,” Dokleat Veseli, a friend and fellow activist of Dehari’s, told K2.0.

Veseli was defiant that through continued actions, justice will be served. “They are going to see that something is going to happen,” he said. “This case is not going to be silenced … I am 25 years old, I could be him in that place too.”K