On the attempts at capturing Kosovo’s youth - Kosovo 2.0
Blogbox | Arts

On the attempts at capturing Kosovo’s youth

Can a German photographer change perceptions of young Kosovars?

At this year’s DokuFest, German photographer Julian Mährlein has been invited to talk about his socio-political art and to capture Kosovo’s youth in pictures to try and dismantle outdated imagery of conflict and war. K2.0 followed him in his attempt, to discover both the challenges and contentment that come along when a German tries to connect to Kosovar reality…

It is the 7th of August in Prizren. A mass of people are walking from A to B as sounds from the minaret echo through the streets. Some women are wearing short skirts, others a hijab. People are looking slightly disoriented but amused — there is an outstanding amount of young people. An energetic atmosphere. Thirty degrees, caressing wind. The future of Kosovo? Maybe.

It is that time of the year. DokuFest is in the midst of its 17th edition. Julian Mährlein walks slowly but confidently through the historic streets of Prizren. He explains that he has already taken some pictures, but he wants to capture more youngsters to make his collection more diverse.

On his back is a backpack holding grey and white cloths and black tape. He stops in one of the side streets and claims a public wall for himself for 20 minutes. His way of working is shaped by intuition and mood, which with a bit of luck turns into a spontaneous but successful photo session. 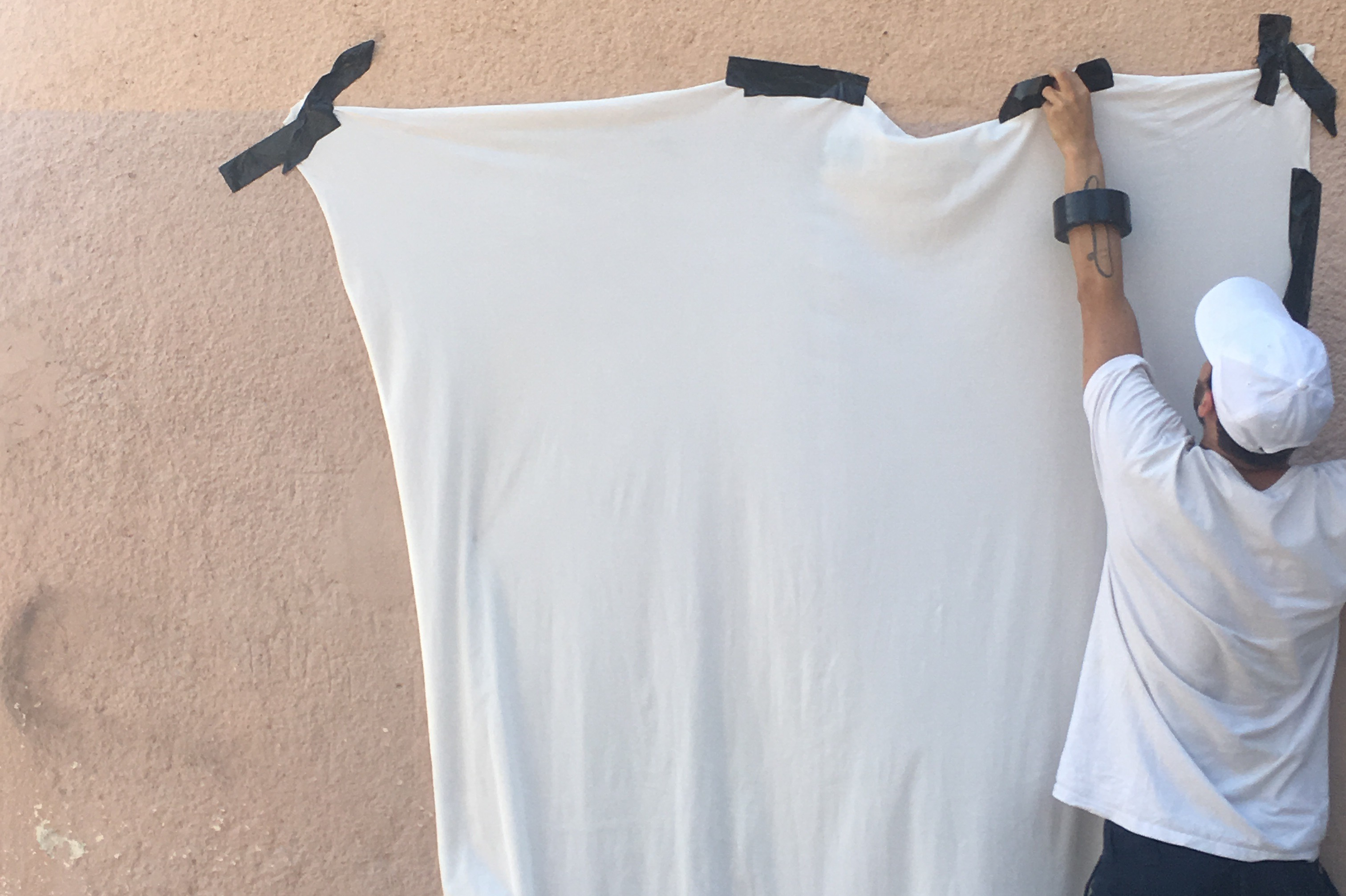 Without waiting for too long, Julian finds a young man with long hair in front of his camera. Suddenly, everything moves really fast, almost hecticly. Julian uses multiple cameras and gives direct instructions. Asked which criteria he bases his choices on, in terms of people to put in front of camera, Julian has no real answer: again intuition, maybe aesthetics or energy, something remarkable which is unexplainable.

Julian grew up in the peaceful, idyllic countryside of western Germany, where his family has been living for generations. Despite not having any background of migration or personal encounters with war and political distress, Julian’s photographic work puts the spotlight on those affected by inner conflicts of imposed identity and oppression. What stands at the core of his work is his ambition to reframe misrepresentative images of stigmatized people and break the vicious cycle of misrepresentation in mass media.

He has previously worked with people labelled as ‘dodgy kids’ in London, trying to find the humanity and individuality in a generation often overlooked and patronized. In response to the homogenous representation of refugees, Julian responded with a series of photos giving color and personality to the group of individuals crossing Europe.

Notions of culture and identity reappear in his work and become almost a central theme. But how can someone who has never lived in Kosovo grasp the region’s cultural traits and customs which make people who they are? Isn’t it inevitably a long shot since he doesn’t share even a glimpse of a Kosovar’s life experience? Julian’s work runs the risk of becoming a superficial conception of a young country, which itself appears to be in a constant struggle with self-identification.

While holding his masterclass on ‘socio-political photography’ on Monday (Aug 6), Julian introduced his audience to his photographic aesthetics and his work ethics. He inserts a pivotal quote from German filmmaker Hito Steyerl: “Stereotypical assumptions about so-called cultures can catalyse dangerous social dynamics and align reality step by step to its caricature.”

Another quote he highlights is this one from American gender theorist and philosopher Judith Butler, which perhaps most captures what he is seeking: “Something that exceeds the frame, that troubles our sense of reality. In other words, something that occurs that does not conform to our established understandings of things.”

At the end of the presentation a visitor addresses the elephant in the room and asks: “ How can you, while reframing and wanting to correctly represent a group, be sure that you yourself don’t misrepresent this same group?”

Seconds of silence and an almost too well prepared answer from Julian follow. He assures that he doesn’t see himself as the beholder of the truth, and explains that he always works from a personal perspective. It is the view comes from his aesthetics that work for him.

What makes Julian's photography different from past DokuPhoto exhibitions is the new aesthetics, away from classical dramatic black and white to individuality, light colours, warm shades.

Confusion. Talking to Julian in private allows for a more detailed and personal account of his motivation to do this project. As a photographer, an artist, his central motif in photography is to create awareness of individuality. Picking the youth works for him since he recognises himself in other young people’s personalities. This plays a more decisive role in his works since its the engine behind his actions, and behind his work.

He feels attached to youngsters and is interested in their phase of contemplation, since it is a very formative period and nothing less than the next generation. This said, initial apprehensions on his motivations prove wrong when understanding that his work is not only about sensation-seeking in (post-)conflict zones, but also about simply connecting to spirit of the youth.

When considering the perspective of his German friends and family, images associated to Kosovo are overly characterized by black and white pictures of war and conflict. From this angle, his project is also about presenting a more colorful picture of Kosovo, a country whose young population often looks up to western Europe.

Through previous visits to Kosovo and friends from the region, Julian identifies the most apparent inner conflict of the youth is the limbo of not being able to travel freely. At least practically, they cannot participate in larger world, as Kosovo still lacks visa liberalization.

Through photography he might be able to offer young Kosovars a hand, to give them the stage or space to show their identity to European society, which knows so little about the potential of the youngest nation in Europe.

Appropriate to the theme of being trapped without a visa, Julian uses an old Passport-Photo Camera, in a reference to this precarious situation. What makes his photography different from the past DokuPhoto exhibitions is the new aesthetics, away from classical dramatic black and white to individuality, light colours, warm shades.

Julian’s contribution might be the first of a few steps towards fighting a superficial conception through something very natural and essential: an honest interest in other regions and people.

Yes it is a long shot to think someone not from the region could capture the youth in Kosovo. But this is not so much about desperately looking for the truth, or the true young spirit. It is what it is… a young photographer from Germany capturing through his aesthetics the youth in Kosovo, thereby giving them the option to reach out. Hopefully, in the process, this produces a more diverse image of Kosovo in sometimes unaware and at other times ignorant societies in Europe.

Julian’s contribution might be the first of a few steps towards fighting a superficial conception through something very natural and essential: an honest interest in other regions and people. People from the Balkans. Works like this might bridge a gap between young generations across Central Europe and the South.

Contextualization is crucial in order to ensure the work is rooted in a Kosovar reality, and Julian concedes that it has been hard to find representative images in the short time available. However, if his warm images of young Kosovar can also beam their way into other parts of Europe, it can at least be a start of a change in perceptions of another stigmatized group….