Four decades ago in his home state of Ontario in Canada, Paul Haggis was driving to a construction job when his father, who owned a theater company, offered him some advice: “You should go to Hollywood and follow your dream.”

Like the closing lines of “Pretty Woman,” when a delirious man wanders through the streets shouting, “Welcome to Hollywood! What’s your dream? Everybody comes here; this is Hollywood, land of dreams,” Hollywood did indeed fulfill the dreams of Haggis, who today is a renowned filmmaker and screenwriter with two Oscars on the shelf.

This week in Prishtina, the double Oscar winner made numerous appearances during the ninth edition of the Prishtina International Film Festival (PriFest), including a masterclass in front of the National Theater on Tuesday (July 18), when for a full hour, Kosovar artists and cinema lovers had the opportunity to gain insights about his craft.

Haggis talked the audience through his journey from being an undocumented worker on the west coast of the U.S. to one of the most sought after artists in the country’s film industry. He explained to the audience that it was 10 years after he started writing when he actually understood what a good script consists of. On one occasion he was told that his script was very good, but was asked “What comes from you? What questions are you asking about yourself?” 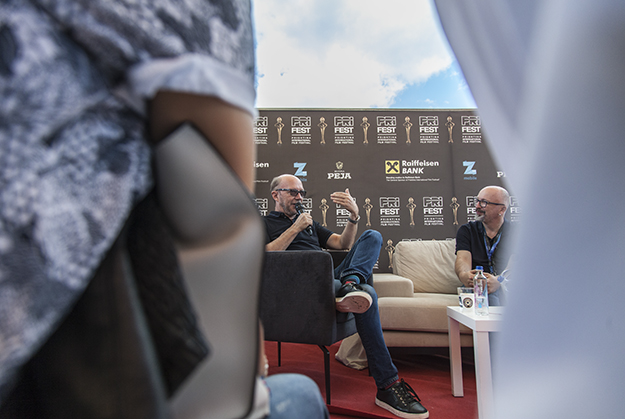 Paul Haggis’ masterclass addressed everything from his career path to the art of screenwriting and directing. Photo: Majlinda Hoxha / K2.0.

The question surprised Haggis. “Am I supposed to do that? I had no idea what a writer did. So from that point when I look back it is then when I started to become a writer,” he told the audience, laughing. “But I made a good living for 10 years and just figured out what it is writers do.” For Haggis, starting to ask questions about the things troubling him and others around him, made his stories far more complex and introspective.

He soon landed his first television job, which gave fresh opportunities to work in new genres, sitcoms, comedy and drama, and he also began to work as a producer. However he was fired many times in between. “Failure is an amazing thing — it feels terrible at that time, but it motivates you to do better,” Haggis said. “I was fired from my TV show and I felt terrible. Then I wrote ‘Million Dollar Baby’ and ‘Crash.’ So every time I get fired I win two things.”

Haggis wrote the script for, and produced, “Million Dollar Baby,” for which he was nominated for an Oscar. The subsequent year, “Crash,” which he both wrote and directed, landed him two Academy Awards, for ‘Best Writing and Original Screenplay’ and ‘Best Motion Picture of the Year.’

“When you get that kind of success though, you have to remember you are the same failure you were last week,” Haggis said. “You have to check that new confidence to make sure it does not become arrogance, and not judge yourself by what others say about you. If you think that everything you do is brilliant, then very soon you will stop becoming an artist. You might become successful but you stop becoming an artist.” For Haggis, artists will always wrestle with their process, constantly struggling with stories and finding a way to say something honest.

Commenting on the process of creativity and producing a great original piece of art, he said that at the beginning of a career, unoriginality is inevitable. “This is what we all do, we steal the skills, this is how we all work,” Haggis stated. “There is nothing wrong with that. You steal until you are able to have have your own thoughts. In the beginning, you just copy others. I just copied Scorcese or Hitchcock, Godard or whoever influenced me.” 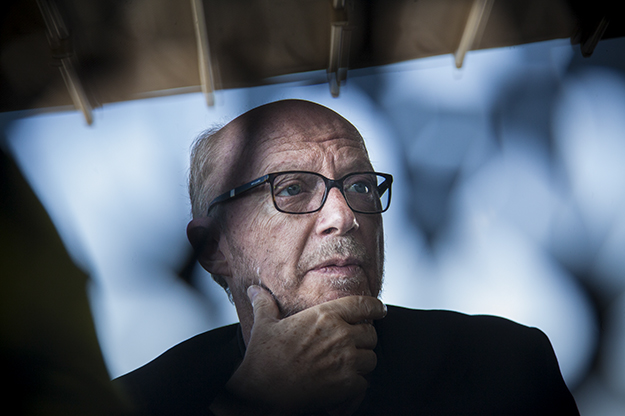 A retrospective of Haggis’ films were shown during the festival, including “Crash,” “In the Valley of Elah” and “The Next Three Days.” Photo: Majlinda Hoxha / K2.0.

On Tuesday night, as a tribute to Haggis, PriFest organized a special screening of his movie “In the Valley of Elah,” which portrays a military father’s search for his son and, after his body is found, the subsequent hunt for his son’s killers. The film takes an irreverent approach to America’s role in the Iraq war, exploring the abuse of prisoners and soldiers suffering from Post-traumatic Stress Disorder (PTSD).

While Haggis was convinced that an American audience would struggle with Iraqi protagonists, he was looking for real life stories that document the complexity of the war and violence. In reference to the biblical battle of David and Goliath that took place in the Valley Of Elah, Haggis explored what happens to people when “they go to fight Goliath, the terrible monster killing his own people, only to find out they are the Goliath.” He pondered the effects this would have and related it to the number of soldiers returning from Iraq with PTSD.

The film was based on actual events and Haggis was asked if he would want to meet the real life protagonist, but declined the opportunity because he knew his approach might upset the father of the deceased soldier. “This is important as a writer. You have to be willing to break everybody’s heart and willing to expose not just yourself but also others,” Haggis said.

The following day at a media conference Haggis elaborated further to K2.0 his views on questioning who is a hero and who is a villain, themes that are often reflected in his work. “There are people who do villainous things, there are people who do heroic things and sometimes it is exactly the same people,” Haggis told K2.0. “I think it is easy to become a villain, it is easy to do villainous things when you feel victimized. That’s the way the governments like to control us, they like to cast us as victims so we can perpetrate terrible acts. We were hurt, and therefore we have the right to hurt others. You see it certainly here in the former-Yugoslavia. 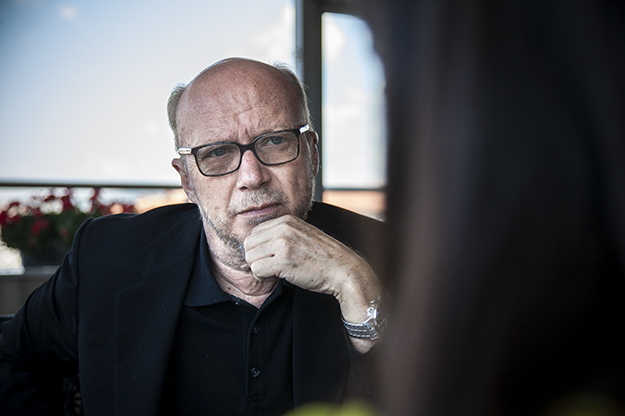 Haggis is currently working on a documentary about the AIDS crises in San Francisco in the early ’80s, one of a number of political subjects his films have addressed. Photo: Majlinda Hoxha / K2.0.

Haggis added that this dynamic doesn’t only play out on a macro level but also in day-to-day life. “Everyone does that, even on a personal level to excuse violence, to excuse aggressive acts towards others, we have to, as human beings,” he told K2.0. “We can’t just say: ‘I am going to do something villainous.’ So we paint ourselves as heroes and act as villains after.”

Haggis also outlined his view that the arts by their very nature are always political. “If you are in a time that is troubled and you are making a comedy about two people ignoring politics, that is a political statement,” he told K2.0.“I think cinema dies when the state, or other forces, try to channel its voice in a particular way and it flourishes in times when there is trouble and there are strong stories to explore. We all want strong stories that affect us and those are often political, whether they are social or ignoring politics, they are still political.”

Haggis is addressing another political topic in his next project, a documentary exploring events in San Francisco during the AIDS epidemic. He doesn’t plan to stop working any time soon either, telling the audience at his masterclass: “I am in pain any time I do not have any ideas, or when I am not working on an idea. I have this terrible guilt that drives me when I am not creating. I feel like I am wasting my life. I think you need to be driven. You cannot sit around and have a coffee and think about it. You need to look for the story.”K