A young Romani artist pulled between Bujanovac and Vojvodina.

On May 16, to mark Romani Resistance Day, Preševo’s Cultural Center hosted an exhibition of paintings by Ajvanko Ismailović, “painter, writer and seasonal worker,” as he likes to describe himself.

Although he’s from Bujanovac, a town in the south of Serbia near Preševo, the author arrived at the exhibition from Ratkovo, a village in northern Serbia, in Vojvodina, where he goes to work every year along with his grandfather, after whom he is named, and much of the rest of his family. It’s also a place where he is thinking of moving to.

Every year dozens of Roma families make the same south-to-north journey as Ismailović’s family for seasonal agricultural work. They say that it’s difficult to find work in the south and that life is sometimes unbearably hard. That’s why some of them, including Ismailović’s family, are considering moving to Ratkovo, a small town which itself is slowly disappearing as its inhabitants are leaving for western Europe in search of a better life. 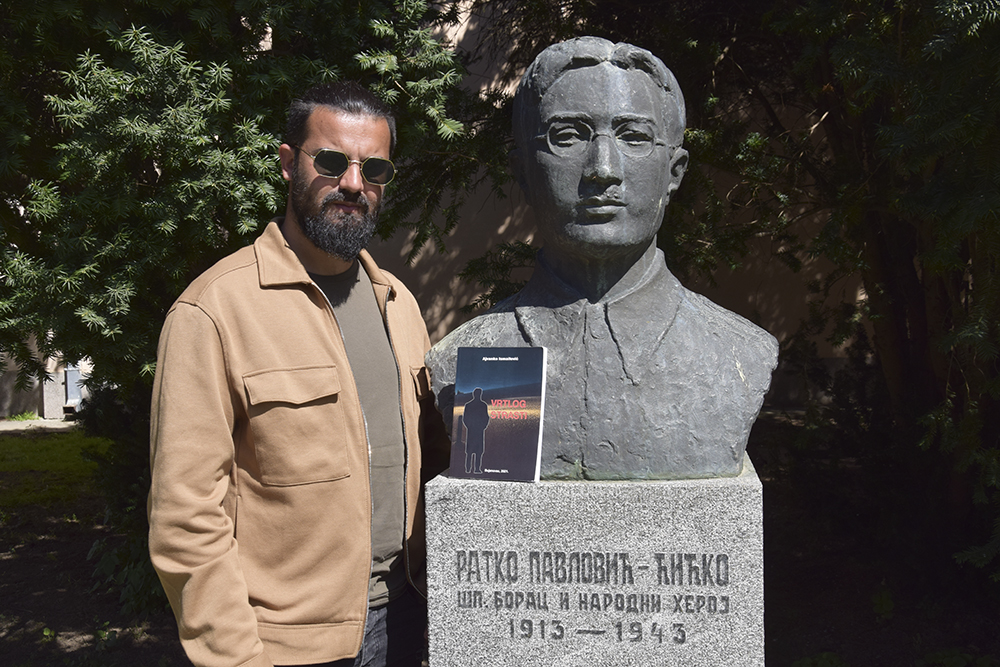 The story of the Ismailović family is one of many stories of internal migrations in Serbia. What makes theirs different is the young Ajvanko’s art.

The first trip to Ratkovo

About five years ago, Ajvanko went north for the first time with his grandfather, also named Ajvanko, and around 30 others from Bujanovac. It was spring, the season for planting peppers and picking strawberries. They stayed there for over a month of hard work. The elder Ajvanko, deda Ajvanko, recalls that after the strawberry harvest he asked the landowners whether there was work available up to the fall. When they said yes, he decided to stay in Ratkovo for a few more months with his family, while the rest of his townspeople returned to the south. Since then he splits his time between the north and the south.

“I’ve been in Ratkovo for five years. Every year more and more workers come looking for work. Now there are sometimes 70, 80 or more,” deda Ajvanko said, adding that there is work all through the year, sometimes so much that there is no time for them to visit their house in Bujanovac. This year he and his family plan to stay there at least until October, and perhaps even longer.

Boško is among those who regularly travel to Ratkovo for work. He comes with his wife who was part of the first group of seasonal workers back in 2017. “When I lost my job at an Albanian’s property in Bujanovac, where I received a daily allowance for driving a cattle van, I came to my wife in Ratkovo, and that’s how we started working together,” Boško said, before complaining about how in the south “there’s no work, no companies, no nothing,” while in Ratkovo “a person can live.”

Deda Ajvanko also says that it’s difficult to live in Serbia’s south. He’s gone looking for jobs abroad as well. He tried Switzerland and Germany, working informally, but there wasn’t any opportunity for him to stay and to be able “to feed a family of 10.” Today, at 67 years old, he thinks about finding a house in Ratkovo, to relocate and leave Bujanovac behind. He could buy a house with the help of a Serbian government grant of 10,000 euros. Such grants are meant to help people purchase houses in rural areas such as Ratkovo, where, like with many villages in Vojvodina, there is an increasing number of empty houses due to the mass exodus of people.

“We have freedom, and now we have jobs in Vojvodina. I like it here because my family is safe. We work everywhere and are satisfied,” deda Ajvanko said.

“My grandkids attend school, my son works in private construction occasionally, he receives children’s allowance because they attend school, and a small social welfare paycheck,” Boško said, adding that he would gladly leave Bujanovac, where none of the 10 members of his family are employed. “One of my sons receives 12,000 dinars,” he said, which is about 100 euros, “the other gets 6,000. I can’t even pay the electricity bill with that kind of money, let alone survive.”

Boško talks about his life in Ratkovo, saying that during the season there is plenty of work so they can save money and make it through November to March when there’s less work. “We have nothing left down there. And so we push hard, living this life of the poor, as they say,” Boško said.

Still, he said that he misses Bujanovac, where his entire family was born and has lived for years. But life is pulling him away to another part of the country.

Nostalgia for the south

The younger Ajvanko speaks about Bujanovac with lots of nostalgia.

“Our grandfather used to take us to the Bujanovac bus station for soft-serve ice cream. We ate ice cream and watched buses come and go,” he said, adding that this is no more. “Someone bought the bus station and I feel sorry for it whenever I pass by. Generations grew up there. I have so many memories from that station,” Ajvanko said, who hasn’t gotten used to these changes.

In the novel, Ajvanko uses the main hero Amil to describe today's Bujanovac.

Ajvanko preserves his childhood memories from Bujanovac through his art. Sometimes through poetry, other times through prose, and at times he does so by painting. In March of this year, he promoted his first novel, “Vrtlog strasti” (“A Whirlwind of Passion”). Doing so made him the first Roma from Bujanovac to write a novel about the community’s day-to-day life in the town.

In the novel, Ajvanko uses the main hero Amil to describe today’s Bujanovac, but he also writes about what tomorrow might bring, about life and Romani traditional customs, as well as migrations and the traumas suffered by ordinary people.

“I have never before written something so long. But I felt the need to try it out,” Ajvanko said, adding that so far he had been scared to convey all his emotions about his birthplace. 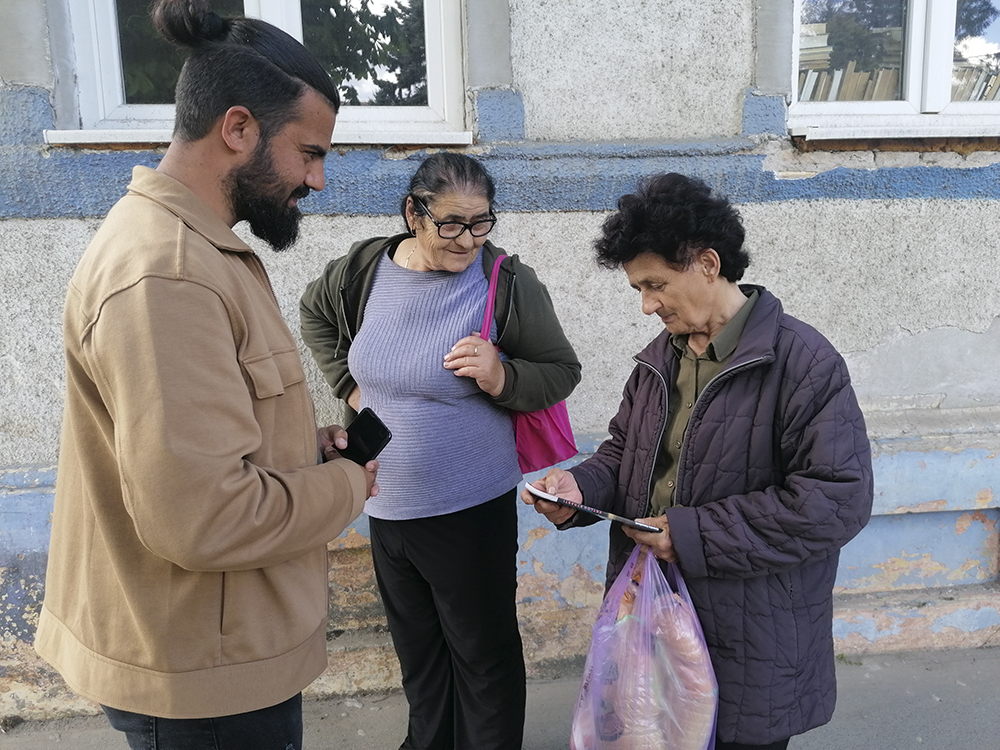 Ajvanko and other seasonal workers have found that people in Ratkovo are welcoming. Photo: Dejan Kožul.

He said his role model in this was Meti Kamberi, a young Roma author from Niš whose novel “Grad bola” (“City of Pain”), describes his path from a street kid to a writer. “Reading Meti’s book, I felt I had it in me and I told myself that if he can do it, then I can do it. He gave me the courage to go into something more serious,” Ajvanko explained.

He received support and understanding from his family. Deda Ajvanko emphasized that he is proud of his grandson who “writes well” and that he is happy because he writes about Bujanovac. He also stressed that, since he works in Bujanovac, everybody loves his grandson.

“When we enrolled him in school, I tried to help him move further as much as I could. We couldn’t afford for him to attend university, but I wanted him to go to Sremska Mitrovica [to study at the police academy] and become a police officer. He was an excellent student, awarded on several occasions by the mayor of Bujanovac,” deda Ajvanko said.

A warm welcome to Ratkovo

Ajvanko has no intention of enrolling in college. He said he doesn’t feel like it’s his thing. He graduated from the economics high school and thinks that a university degree won’t help him reach the goals he’s aiming for, which are to become a better writer and painter.

There are fewer and fewer young people living in Ratkovo. Those that remain tend to finish secondary school education and leave in the search for a job or further education. Still, Ajvanko said he likes how things are in the north.

'I find everything here to be nice, we are welcome everywhere.'

“I find everything here to be nice, we are welcome everywhere, although we wondered at first how people would accept us. My family is here, my community, my people. I have someone to talk to, to share what I carry inside. To sum it up, all is well,” he said.

Ajvanko and his family are well-known in Ratkovo, a place with many people coming in from other parts of Serbia and Bosnia and Herzegovina. While he strolls the streets, locals approach him and offer congratulates on the publication of his book. Occasionally he hands out a free copy.

Until the Roma families arrived from the south, which included many children, the city was dying out and slowly becoming desolate. Now things are changing.

Although he will remain in Ratkovo for now, Ajvanko says that he would never leave Bujanovac behind, although he told us that it would be difficult to predict what the future might bring. If he has to, he will cultivate the bond through his art at least.

“I love Bujanovac too much and everything in Bujanovac. But there are no jobs and you can’t survive,” he said, adding that coming to Vojvodina and Ratkovo was difficult, especially in the first year. “Now it’s different. But today I feel the need to return to Bujanovac because this city inspires me tremendously.”

Still, he finds inspiration in Vojvodina too, especially for his paintings. “I’m thinking about having my first painting exhibition in Bujanovac. I hope to make this happen before the year ends,” he said. “And after Bujanovac, here in Vojvodina.”