As has become almost a tradition in recent weeks, the PDK-AAK-Nisma (PAN) coalition today (Monday, Aug. 14) once again decided not to participate in the continued inaugural session of Kosovo’s Assembly. It is the fifth time since the inaugural session opened on Aug. 3 that PAN — as well as the 20 deputies representing minority communities — have chosen to stay away. Their continued absence prevents the election of the president of the Assembly that would pave the way to forming a government.

Only 53 deputies, all of them from either Vetevendosje or the LDK-AKR-Alternativa (LAA) coalition, were present in the Assembly hall, not enough to reach the quorum of 61 required to hold votes. However in the absence of PAN, no vote could have taken place regardless since, in line with a controversial 2014 Constitutional Court decision, as the largest party or coalition in the June 11 election, it has the first right to propose a candidate for Assembly president. 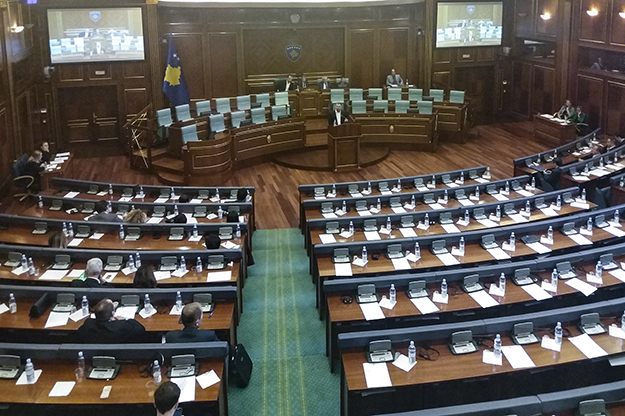 Opponents have questioned PAN’s reasoning for its absence, pointing to the fact that the coalition has made repeated statements in the past two months since the election claiming to have enough support to elect both an Assembly president and a government. They say that PAN is stalling because it does not have the votes to secure the role of Assembly president for their presumed candidate, PDK leader Kadri Veseli.

On Sunday the “Quint” embassies of the U.S., U.K., Germany, France and Italy issued a statement saying they are “concerned by the ongoing political situation in Kosovo” and highlighting that it is the “responsibility of Kosovo’s leaders to form these institutions,” adding that concrete proposals are required to move the situation forward.

“An important first principle is that deputies elected to the Kosovo Assembly should attend Assembly sessions and allow its work to begin,” the statement concluded.

After it was confirmed that there was no quorum in this morning’s session, Mikullovci opened the podium for speeches by any of the present deputies.

Vetevendosje’s Glauk Konjufca criticized PAN’s decision not to participate in the session, stating that “this is typical of them.” “Where is the problem? It is very simple, they do not have the numbers either to elect the president of the Assembly or to form the government,” he said. “PAN is driven by a totalitarian logic: ‘It’s either us in power or there is no alternative.’”

"My question to the non-majority deputies is: Why are you boycotting the Assembly session — what is the reason?”

Both Konjufca and LDK prime ministerial candidate Avdullah Hoti hailed the QUINT embassies’ statement, with Hoti remarking that “it clearly invites the deputies to fulfill their constitutional duty, and to be in the session.” He added that this situation cannot continue and that LDK would look to organize a discussion with other parties in the upcoming days, before sending the issue to the Constitutional Court.

Vetevendosje’s Sami Kurteshi asked why the deputies from the parties representing minorities are missing when they are obliged to be part of the sessions and to represent the interests of their communities. “The deputies of the non-majority communities are not formally part of PAN,” he said. “However, they have never clarified their stance and my question to the non-majority deputies is: Why are you boycotting the Assembly session — what is the reason?”

A “consultative meeting” requested by PAN has been scheduled by Mikullovci for Wednesday (Aug. 16), with LAA confirming that it will be part of the meeting but Vetevendosje saying that it will not attend as any discussions should take place within the Assembly chamber. Mikullovci told deputies that the only question that will be posed to PAN is: “When will PAN be ready to be in the session and to elect the president of the Assembly?”K