The PDK-AAK-Nisma (PAN) coalition today admitted that it has not secured enough votes to elect their proposed candidate for president of the Assembly. PDK’s Enver Hoxhaj delivered the news from the Assembly podium during the sixth attempt to conclude the inaugural session as PAN deputies — and those from the minority parties — chose to end their stay-away.

After weeks of claiming to have enough support to elect their candidate, but at the same time boycotting the inaugural session at which the Assembly president is elected, Hoxhaj said that they have only secured 60 votes; to elect an Assembly president, a simple majority of 61 votes is required.

“We have the candidate but not the majority.”

Three weeks after the inaugural session opened on August 3, Hoxhaj said that PAN needed a further two weeks to secure the required votes.

It is widely expected that PAN’s pick as Assembly president is PDK leader Kadri Veseli, a choice that is seen as unacceptable by other parties. Vetevendosje’s prime ministerial candidate Albin Kurti repeated his party’s position that they would be prepared to vote for another “respected PDK deputy” as Assembly president, but not Veseli.

Although chairman of the inaugural session Adem Mikullovci continually repeated that there was to be no debate, in a short but fiery session that once again ended with no progress, Veseli and Kurti traded blows.

“Why are you not testing yourselves?” asked Kurti. “Go and test yourself — if you don’t have the numbers then I’m sure that there are deputies within PAN that would have 61 votes.”

Veseli responded by saying that as leader of PAN he was prepared to allow anyone that believed they could secure 61 votes to nominate an Assembly president, apparently offering to forego PAN’s right as as the largest entity following the June 11 elections to nominate first. 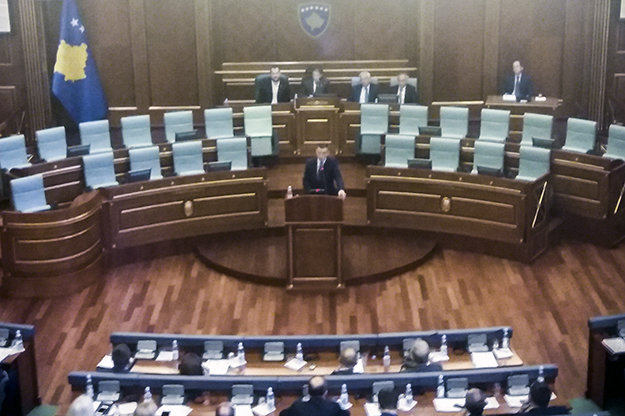 “On the day when you have 61 [votes], let the new institution of the Assembly be created,” he said, having first asked Mikullovci to carefully note what he was saying.

However Veseli quickly appeared to contradict his offer by saying: “This state is sacred; we will not leave it so easily so that you can manipulate it.”

In theory Vetevendosje, with 32 deputies, together with the LDK-AKR-Alternativa (LAA) coalition, with 29 deputies, could have the 61 votes required to elect their own Assembly president if they could come to an agreement. However LDK’s Teuta Rugova — who was once again absent from the Assembly at today’s session — is expected to cross party lines and vote in line with PAN.

With the 20 deputies representing minority parties also seemingly backing PAN, which has 39 deputies, it leaves the balance of power in the Assembly equally split.

Kurti also accused LDK leader and former prime minister Isa Mustafa of blocking potential cooperation between their parties. “LDK named Mustafa as head of their negotiations but not as the one who would make negotiations impossible,” he said. “If he’s not meeting with PAN, as he has declared many times, and he has only met with Vetevendosje once, then the following question is: What negotiations is he leading?” 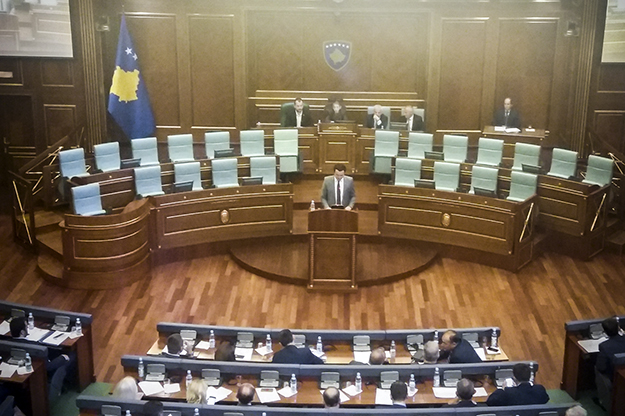 He followed this up by inviting LDK to come to an agreement with Vetevendosje. “Dear deputies of LAA, we extend the hand of cooperation to harmonize our positions and common actions,” he said. “We need an Assembly and a new government — it’s in our hands. Let us say it and let’s do it.”

Veseli reminded Kurti that Vetevendosje was seeking a coalition with the same LDK that Kurti’s party has clashed with publicly in the past. “Once they filed 70 lawsuits and then they beg to make a coalition,” said Veseli, referring to corruption cases that Vetevendosje filed against Isa Mustafa’s administration in Prishtina before going on to refer to protests at Mustafa’s family home.

“They attacked his family, with terrorist attacks they assaulted the Assembly,” he said, speaking latterly of the ongoing legal case against four Vetevendosje activists who are accused of attacking the Assembly building with a rocket-propelled grenade. 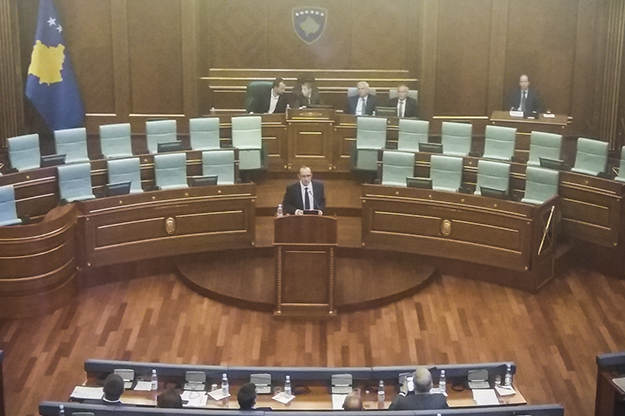 LAA’s prime ministerial candidate, Avdullah Hoti, said that the post-election negotiations had been dirty, and suggested that there had been criminal pressure applied to some deputies by individuals. “This is not how you make the state. This is not how you make the institutions,” he said. “The state is made with dedication, with willingness. Institutions can be formed with an agreement between political forces.”

Hoti also used his speech to highlight the economic hardships that Kosovo is facing because of the ongoing stalemate and the necessity to overcome the crisis quickly. He said that LDK will continue to organize meetings outside of the Assembly with other political parties in an attempt to find ways to overcome the legislative blockage.

It is not yet known when the next attempt will be made to complete the Assembly’s inaugural session.K