Almost all the units of the University Clinical Center of Kosovo (UCCK) were made available to combat COVID-19. However, when the virus struck in Kosovo, the main concern was still whether the health care system had sufficient capacity to withstand the load of patients in case matters  escalated.

If necessary, all 125 beds of the Infectious Diseases Clinic would be available only to patients with COVID-19. Also, the beds of the Pulmonology Clinic, Dermatovenerology, as well as the Sports Medicine facility were made available.

Over 500 beds could be “activated” by the UCCK if they are required — 40 of them for intensive treatment. However, each bed would not have a respirator, as there are 142 respirators in Kosovo and only 95 of them are owned by the public sector. The Ministry of Health announced in April that it was accepting bids to bring in another 50 respirators to be put into operation by the end of May.

But before the respirators arrived, Kosovar institutions began thinking that the pandemic was ending. During the month of May, the number of new infections steadily decreased, while the number of those healed increased.

The measures taken to combat the COVID-19 pandemic during May were gradually eased by the former Kurti government. Certain business sectors reopened, the movement schedule for citizens was extended, places of worship were reopened and quarantine centers were closed. From June 1, the borders were opened, while government officials continued to call for adherence to safety recommendations, such as physical distancing, wearing a mask and practicing hygiene.

During that week, the Government of Kosovo was changed and on June 3, Avdullah Hoti became the new head. The new government would choose to continue the battle the pandemic without taking any additional action against it. It kept schools closed, but completely removed other measures that were in place, while the World Health Organization suggested that countries should lift isolation gradually.

The EU is expected to open its borders to citizens of 15 "safe" countries on July 1 — Kosovo is not among them.

At the government meeting on June 7, it was decided to completely lift the ban on the free movement of citizens. People who would enter Kosovo would not need to self-isolate, and the medical workers stationed at the border were withdrawn. All restrictions on the circulation of goods were also removed.

Prishtina Airport was also reopened, and June 28 saw the first arrival after more than three months. All passengers, both Kosovar and international, were admitted; it is recommended that everyone presents a negative COVID-19 test, but it is not mandatory. While the EU is expected to open its borders to citizens of 15 “safe” countries on July 1 — Kosovo is not among them.

Following the eased restrictions in Kosovo, several protests were held. On June 12, the Vetëvendosje movement held a rally in the central squares of Prishtina, attended by thousands of people. Protests were also held against the government’s decision to not allow weddings, attended by hundreds of people. These rallies were seen as dangerous by many, as physical distancing was not respected and many protesters did not wear masks.

“Any violation of the rules will be a danger to yourself and to others. The easing of measures should be accompanied by an increase in discipline,” said the newly appointed Minister of Health, Armend Zemaj, while underlining that the number of inspectors who would check whether the recommendations are being respected would increase.

But as the measures eased, the pandemic began to intensify

The number of patients grow

In light of these developments, the Ministry of Health has reorganized the testing criteria so that only the symptomatic contacts of infected persons are tested and not all of them, as it was done previously.

The figures show that the recommendations for increased protection have not been followed and there is an increase in the number of infections, although Minister Zemaj predicted that the inspectors could ensure compliance with the recommendations of the Manual for Combating and Preventing COVID-19, which was published by the Ministry of Health. However, it has been reported that the Manual is not being widely implemented, and it has been criticized that being over 150 pages, it is too large to be practical.

On the other hand, Prime Minister Hoti is concerned about the Kosovar health system’s capacity to handle the current COVID-19 situation. 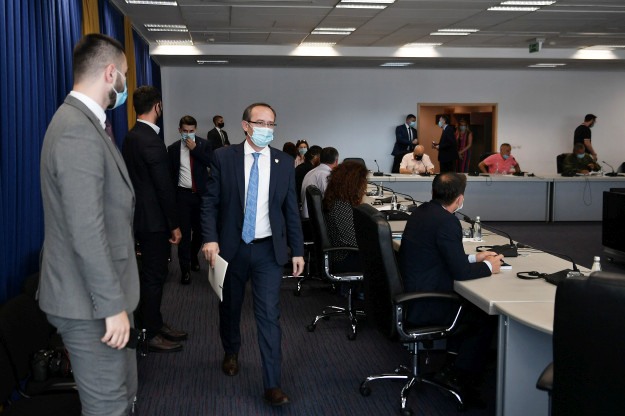 “We cannot allow the situation to get out of control, the lives of citizens are most important, it is our first priority,” the prime minister told a news conference on June 29. “The Infectious Diseases Clinic is overcrowded. Now the minister, the director of the Institute, the director of UCCK is creating additional spaces in other clinics, as well as in regional hospitals.”

That the Infectious Diseases Clinic is crammed full is also corroborated by the University Hospital and Clinical Service of Kosovo (UHCSK).

“With the increase in the flow of patients who have come from regional hospitals, we have been forced to order the directors of these hospitals to create extended infectious wards, so that patients suspected of  having COVID-19 and with mild symptoms who need hospitalization are admitted to regional hospitals,” the director of UHCSK Basri Sejdiu told Koha.net.

This marks the first time that patients with COVID-19 have been treated in regional hospitals. There are already over 100 patients being treated at the Infectious Diseases Clinic at UCCK, and according to Sejdiu, if the condition of patients treated in regional hospitals worsens, they will be transferred to the Infectious Diseases Clinic for treatment, which could further overwhelm the clinic.

Kosovo is now on the list of 11 countries where accelerated transmission has led to "very significant resurgence" of COVID-19.

And that seems to have angered Prime Minister Hoti. “If this pace continues, we will be forced to reinstate total isolation measures, which would have serious consequences for our economy and our families,” he said in a Facebook post.

According to him, the solution remains to respect the Manual of the Ministry of Health for protective measures against COVID-19, which is “mandatory” for any public and private institution.

“There will be no tolerance for anyone who violates these rules,” he said. “We cannot suffer as a society due to the irresponsibility of institutional officials or businesses that do not take adequate protective measures.”

Third worst
Kosovo is now on the list of 11 countries where accelerated transmission has led to a “very significant resurgence [of the virus] that if left unchecked will push health systems to the brink,” according to the World Health Organization (WHO) for the region and Europe. This has led many to turn their eyes to the Hoti government, requesting  proper management of the escalating situation.

On June 28, Assembly Speaker Vjosa Osmani shared on Twitter a table showing Kosovo in third place in Europe — after Sweden and Northern Macedonia — in the number of COVID-19 cases per 100,000 inhabitants between June 12-26. The table was derived from Johns Hopkins University’s COVID-19 Map and population statistics from the Eurostat agency.

“Kosovo appears to have flipped the chart from being one of the winning stories in defeating Covid-19, to top 3rd country per new additional (+) cases.” she wrote, calling on the government to pay urgent attention to the situation and asking for all citizens to respect the measures provided in the Manual.

Sergy Koryak, head of the WHO Office in Kosovo, also commented on the increase in the number of people affected by COVID-19.

“This is certainly a result of the easing of restrictions that happened very quickly,” he told K2.0. “Unfortunately, people do not follow all the necessary precautions in these situations [wearing a mask and maintaining physical distance] and the level of compliance is very low. Let’s see how far this will go.”K