It’s hard to define exactly what Club ‘M’ is; part bar, part cafe, part cultural hub — a space that offers music from the staple electronic and techno to more experimental and alternative sounds, even the occasional jazz. A 10-minute walk from the city center, the three-storey building in a largely residential neighborhood also boasts plenty of outdoor space in which to mingle or simply chill out.

Since its opening six months ago, ‘M’ has gained a reputation for offering a wide range of musical and cultural events for people with diverse tastes and styles. “The basic idea is to try and create a place, a house of events that is not dependent on different donors,” says owner, Dren Maliqi. “The city needs such a place, where young people gather, where people who think, people that do not care, free souls get together.”

Before its reinvention as a popular social space the building had been an unremarkable family house in quite poor condition. Having been standing empty for two years, Maliqi took it upon himself to renovate the whole place single handedly and transform the tired home into a club that would stay open until the early hours. “I took the risk and did something that few actually do, to try and invest in culture in Kosovo, not having a single cent in my pocket,” says Maliqi, who spent a year carrying out the necessary work. “It’s really personal for me. It is something that is developing as a space, as a program, as a concept, also with the public and people that visit.”

While for now ‘M’ offers mostly musical events, Maliqi together with his wife Vlera Spahija, is working to make it a place that will offer a wider scope of cultural activities. However currently the primary goal is to make it financially sustainable. “We are working to make it a place that can generate its own income, that covers the expenses of maintenance and our staff, so for the last six months and for the next six months we will continue at the same tempo,” says Maliqi.

He firmly believes that providing a space where all artists can come and ply their craft, costs them nothing, and could well result in something beautiful in the future. “We have more work during the night and less during the day,” he says. “We have a space that sometimes is used, but sometimes it remains vacant. It costs us nothing to encourage all the people who need to rehearse in arts, music or culture to come and utilize the place. People who need spaces, people who are not funded by anyone but are doing it through goodwill. We have that opportunity, and we will always provide it. 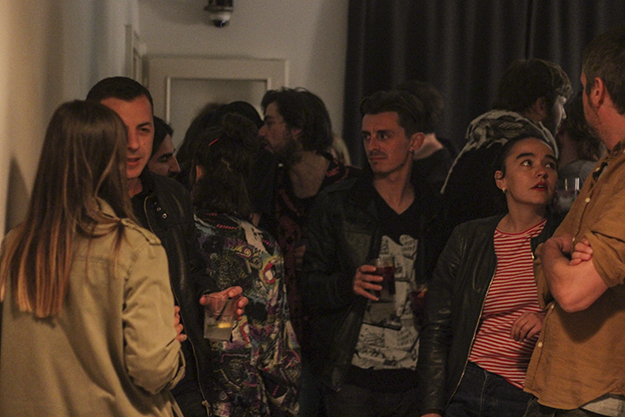 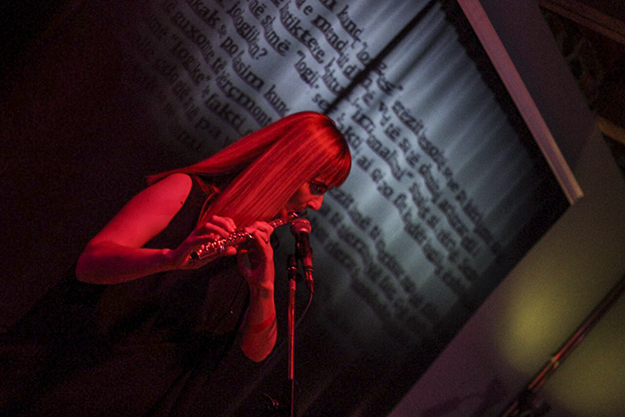 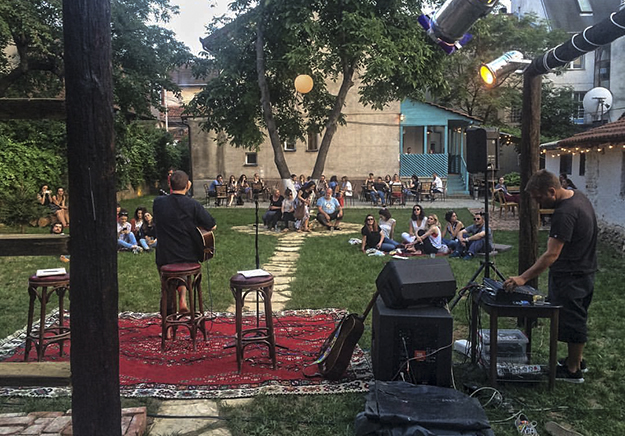 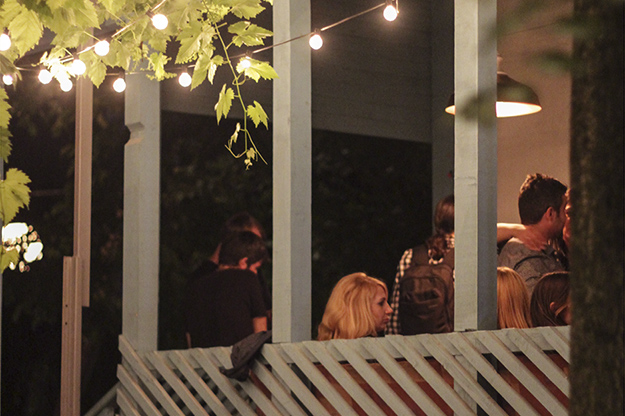 Spahija explains that while they need to ensure they are financially sustainable, the ethos that ‘M’ is trying to establish is more based on artistic and cultural values rather than financial gains. “[It is] especially for artists in general but also for musicians who have not yet succeeded or those who do it just for the love of it,” she says. “People come here to play music for pleasure. There were cases when people have come here and said that they were not doing it for money, but for pleasure and will do it again for pleasure. And this is the sort of understanding that we have established with certain people and for us it is really cool, particularly in this time when everybody is struggling.”

The musicians who play at ‘M’ vary from people who simply love the music and want to share their own playlists with others, to local DJs and alternative bands.

Even classical musicians can find their place there, such as flutist Eremira Citaku, who K2.0 met up with on a recent visit as she performed an experimental set with Liburn Jupolli and Luan Durmishi in which they tried to create a “communication of music with language.”

The performance was characterized by peculiar sounds from a small electronic device which Citaku operated, alongside her flute and vocals, while her brother Lum provided a live video installation. The whole performance was called “The House of Being 2,” a first version having been performed in last summer’s Baushtellë art project.

Citaku feels that a space such as ‘M’ is a positive thing and provides a suitable venue for such art projects. “We have rehearsed here for a few days in a row,” she said. “The opportunity that ‘M’ provides is very good because often we musicians do not have enough space to get together. I believe it is an appropriate place to express yourself more freely than usual.”

Blerta Kosova, one of Kosovo’s young musical talents, has already had numerous cooperations with ‘M,’ including rehearsals, performances and simply playing her music. She feels that the club is a comfortable place where people radiate a positive and friendly energy. “Other than being a ‘nest of nightlife’ it also provides the space for artistic purposes,” Kosova told K2.0. “They are up for helping and cooperating with all the different ‘types of artists’ and it’s simply a place where everyone can bring a concept or an idea and put it into practice.”

Maliqi, who describes himself as a cultural worker, says that stimulating arts and culture is a process that needs patience and commitment, and creating a communication channel between the artists and the public is one of ‘M’’s main goals. “One of the problems why [art] is not profitable — which I think it can be — is because people are lazy, or maybe they expect the profit immediately,” he says. “They also lack motivation to work with the public and artists. One of our goals is to do just that, in order to create a community and provide continuity with this house as a place that offers space and opportunities.”

However ‘M’’s role transcends that of a cultural hub or as any other conventional definition of a space. Spahija, who usually replies with, “Hey, I’m only helping,” when asked about her role with ‘M,’ says that for her it is ultimately important that anyone who visits feels that they belong there.

“If I have something personal with this house [I want] all those who come not to feel judged or intimidated by others,” she says. “To have such diversity so as to not fall in the category of being a place for ‘these’ or ‘those.’”

During the daytime ‘M’ is generally quiet and to those who pass by it is a coffee place which also offers a short menu of foods ranging somewhere “between fast food and more healthy options.”

Visitors are also free to browse the quaint attic library, where they can delve into the eclectic book collection of Maliqi’s uncle, Shkelzen; the well known philosopher, art critic, political analyst and intellectual is the owner of the house.

The range of ‘M’’s offer is always expandable since it can be hired by different groups to put on their own activities. “Except for the music, we are talking about a space where different events can be organized,” says Spahija. “For now we are not doing anything of our own but we are hosting different organizations when they wish to organize training sessions or workshops and we have encouraged all organizations [to use the opportunity], especially those that are more marginalized.”

Running a space such as ‘M’ comes with its own challenges. Maliqi explains that currently the biggest issues are practical ones. “The place is 730 square meters and it takes a long time to maintain it,” he says. “Another challenge is to bring people here but that is more related to the program.”

A further issue related to the location is being mindful of the local residents living in the neighbourhood and ensuring that noise levels are kept down after midnight. “We’re not in the center and are also surrounded by residents,” says Spahija. “It is a bit problematic to develop what we want, especially for the parties after midnight.”

The future for club ‘M’ holds more intellectual challenges; to create an artistic program of their own and to fully realize their ambitions for the place. “The time will come when we will no longer rent the space out but make a yearly program of our own,” says Spahija. “We want to continue up to a point where this club will function as a cultural club, where you can have a membership of six months or one year and can expect us to offer events each week or month depending on the program which we will make, be it screenings, arts or music bands.”

Spahija believes that such an initiative would really bring something new to Kosovo. “The whole thing we are doing won’t only last a year but until the end; as in forever and always developing,” she says. “We don’t want to just make a boom in the first year and then vanish as has happened with many other similar clubs.”

Maliqi agrees that while he is pleased with the way that ‘M’ has developed over the past six months, they still have lofty future ambitions for the project. “The goal and purpose here is to become a club in the full meaning of the word,” he concludes. “There are and will be many problems and difficulties but we are up to it.” K

Photos by Cristina Mari and courtesy of “M.”