Short stories by authors from former-Yugoslavia aim to reconcile the bad blood between nations.

It takes one to forgive, but it takes two to reconcile. The Cambridge Dictionary defines reconciliation as a situation in which two people, or groups of people, become friendly again after they have argued.

The nations of the former Yugoslavia have done more than argue. In the 1990s, some of them descended into some of the bloodiest wars of Europe’s recent history. Decades later, the wounds are still left open, collecting hatred, enmity and bitterness.

The Center for Nonviolent Action (CNA) is a peacebuilding organization with offices in Sarajevo and Belgrade. Aiming to encourage people to see reconciliation as a way of giving up on hatred and beginning the search for justice, CNA has brought forth an artistic and creative idea: the publication of a volume of short stories called “Biber.”

The book is the result of an open call for short stories on the topic of reconciliation, penned by authors from countries of the former Yugoslavia. Katarina Milicevic, one of the organizers of the initiative, explains that authors were eligible to participate if “one of Croatian, Macedonian, Albanian, Bosnian, Montenegrin, or Serbian is their mother language.” The stories had a word limit of 9,000 words, and had to be original; written and published for the first time.

Following the first call for stories, 316 were submitted. The first volume, now published, consists of the best 25 as selected by a jury including Bosnian poet and novelist Faruk Sehic, Kosovar playwright Doruntina Basha and Serbian actor Bojan Krivokapic. The jury also awarded their three favorite stories prizes, with the awards going to writers Vladimir Tabasevic, Nadia Garis and Sladjana Ljubicic.

The book collection has been named “Biber” because the word is the same in all the languages of former Yugoslavia; it is the word for black pepper, a concept void of all dubious connotations. Although these stories of reconciliation are small steps, they are persistent. The organizers have announced a new call for short stories for the next edition of “Biber.” Submissions close on June 14.

Publishing books to reconcile Serbs with Croats, and Croats with Bosniaks, and Bosniaks with Serbs, and Serbs with Albanians, and Albanians with Macedonians — it may seem an impossible task. Surely, someone might argue, the mass media and politics would be more effective in achieving that. But at an event to promote the first edition of “Biber” at Dit’ e Nat’ in Prishtina on Wednesday night, in which excerpts from two short stories were read before a short discussion was held, there were many voices arguing that culture could overcome barriers that politics and the media could not. 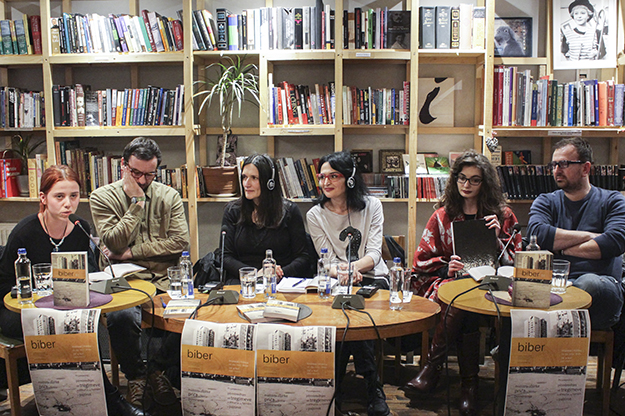 One such voice was Milicevic’s, who worked in the media for years but says that activism fulfills her far better than journalism could, and, according to her, is even more effective.

“Often, we journalists, whether we admit it or not, are left frustrated,” she told K2.0 after the discussion. “Because some things that we hold as important, and which need to be told to the public, are not approved by editors. Even if they are, somehow it passes by because they were not the ‘hot’ topics, the ‘sexy’ topics of the time.”

Lately, reconciliation has become something of a “sexy” topic for some politicians as well. President Hashim Thaci has announced a new Truth and Reconciliation Commission, intended to encourage mutual forgiveness among Kosovo’s Albanians and Serbs. A similar commision was established by former-Yugoslavia president, Vojislav Kostunica, in 2001, with limited success.

Milicevic argues that politics fails because it is only momentary, whereas culture is enduring. Politics reacts only to the present, she says, supporting her argument by suggesting that people often can not remember (or at least not without some effort) who the president or prime minister was five years ago. 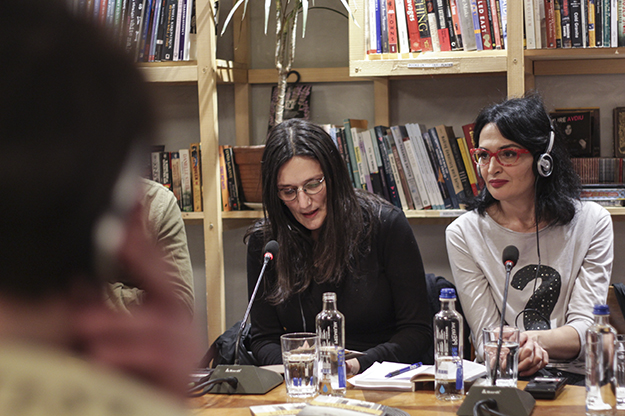 Organizer of the Biber initiative, Katarina Milicevic (right), believes that culture can have a more enduring legacy than politics on the reconciliation process. Photo: Cristina Mari / K2.0.

“Culture is going to last — those books are going to be read in hundreds of years,” Milicevic said. “Politicians only remember those who went to war, and I hope there are not going to be such leaders in these places anymore.”

Jeton Neziraj is a playwright, who with his work attempts to contribute to the reconciliation process, dispel prejudices and stereotypes, and promote diversity. He was a member of the panel discussion at Dit’ e Nat’, and points to the lack of trust in media institutions, and the problems of access caused by linguistic barriers.

“[Albanians in Kosovo] have the upper hand because a large part of the people understand Serbo-Croatian,” he told K2.0. “We can read their literature, and follow more precisely what is happening in Serbia, while those from there have more prejudices.”

Neziraj also feels that the public in Serbia is utterly dependent on the media to find out what is happening in Kosovo. “Unfortunately a large part of [the media in Serbia] are manipulated or are government [controlled] media with a specific political agenda,” he said.

Qerim Ondozi worked on translations of stories for the book, and was also on Wednesday night’s panel. Ondozi speaks admiringly of the initiative, pointing out that it has driven 316 people to write about reconciliation, and maybe 3,600 more to consider the concepts. “It is individuals who reconcile,” he told K2.0. “The masses tend to be driven more like herds.” 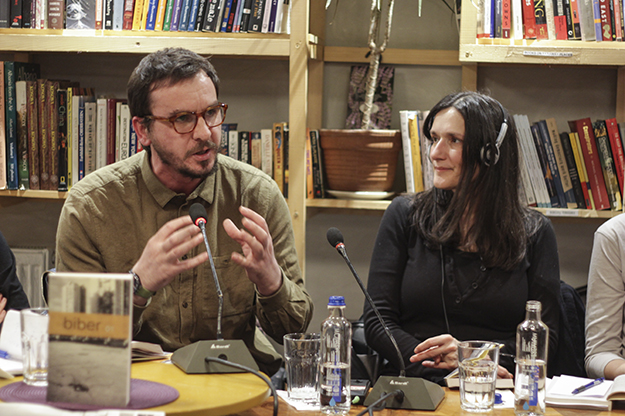 Translator and panelist Qerim Ondozi (left) believes that the project has inspired thousands to engage with the reconciliation process in the Balkans on an individual level. Photo: Cristina Mari / K2.0.

Neziraj also believes that the concept of reconciliation is, first and foremost, an individual act. The role of authors, artists and creators, he says, is to build bridges of communication between people: “When opportunities are created where artists can communicate their ideas freely, without barriers, only then will the conditions for other people to think about reconciliation be created.”

It was a common theme running through the entire event, the idea that reconciliation should happen individually, aided by artists, who can influence a culture with their work. The aim is to humanize, to show that an Albanian, or a Serb, or a Croat is just as human as anyone else —  someone who laughs, cries, is happy or sad, loves and get dumped, and has moments of pride and moments of shame.

Although Neziraj admits that he has no legitimacy to ask for reconciliation from anyone, he still believes that “these initiatives create climates of good faith between people, open opportunities to see the other side.” He adds that these events help fight preconceptions and prejudices, which inevitably arise around the unknown. 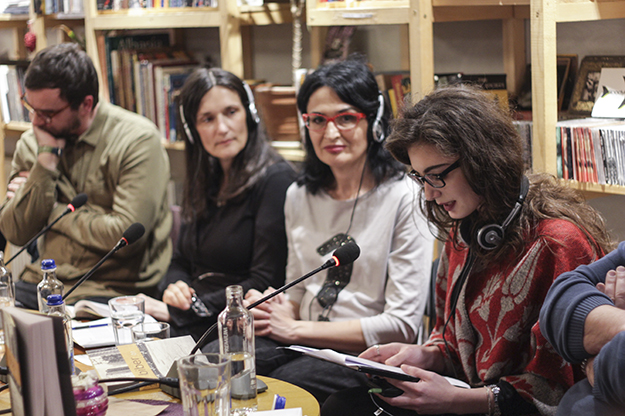 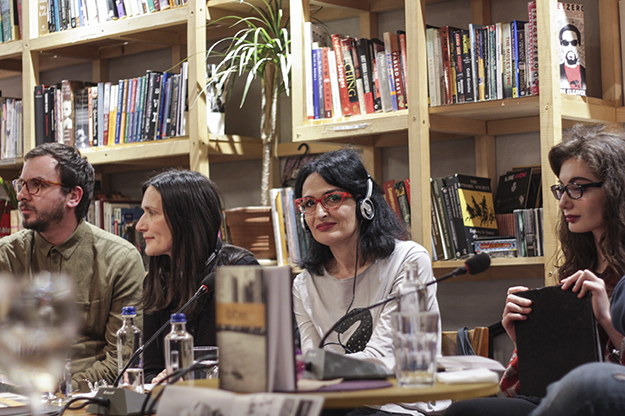 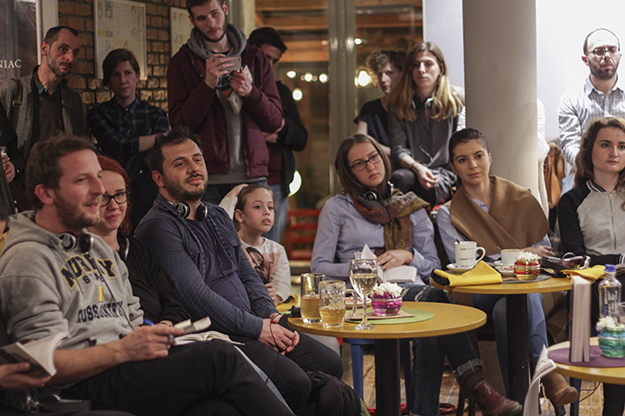 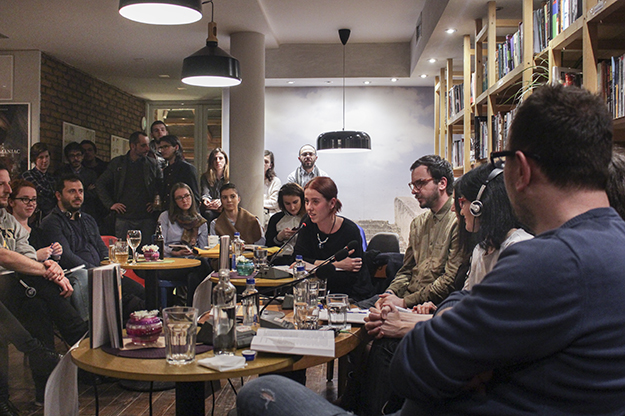 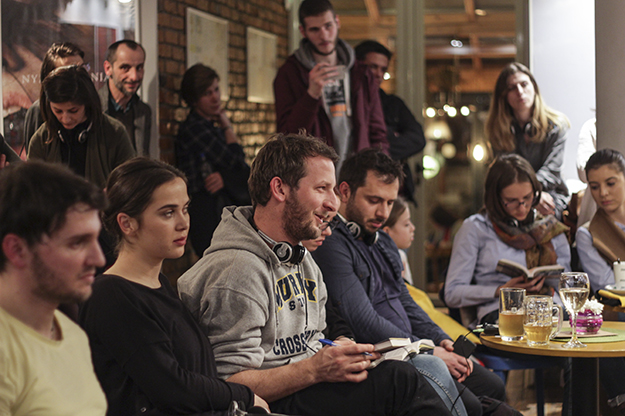 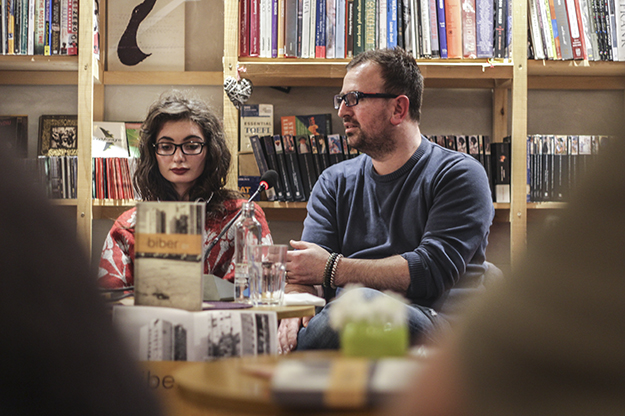 While the power of culture to aid the reconciliation process in Kosovo found overwhelming support in Dit’ e Nat’, perceptions of the state of the process were often less glowing. Ondozi argued that in Kosovo, reconciliation is often viewed with disdain, after premature attempts left people jaded by the process.

However, the voice of Aulone Kadriu, who moderated the discussion, offered hope that in the future reconciliation can be seen in a better light. “We, the young, are not responsible for what has happened,” she announced at the beginning of the night. “But we are responsible for reconciling and forgiving what has happened. Reconciliation should be a request for justice, and a request for comfort, an organic comfort.” A comfort that can be assisted by a good book.K