Women and men who were raped or who suffered any kind of sexual violence during the war are still waiting for justice, long-overdue reparations and recognition of what they have gone through, says a new Amnesty International (AI) report.

The report titled “Wounds That Burn Our Souls,” was released at a conference today (Wednesday, Dec. 13) at Prishtina’s Sirius Hotel.

“Nearly two decades after thousands of women and girls in Kosovo were systematically raped during the 1998-99 armed conflict, the survivors are about to receive long-awaited recognition and compensation for the rape and torture they endured. Yet only a handful of perpetrators have been convicted for these crimes, and survivors are still fighting for justice,” the report says.

Speaking at the conference, AI Balkan researcher and author of the report, Sian Jones, emphasized that the denial of access to justice, gaps in reparations provisions and the continuing shadow that stigmatization places over the lives of survivors are the three key areas the report highlights.

An absence of justice

In March 2014, the right of survivors to reparations, predominantly in the form of monthly monetary compensation, was recognized in amendments to the existing law that covers the status of victims of war.

But it was only in 2017 that a verification commission was set up that will be responsible for reviewing applications from people claiming victim status and the government, now headed by Ramush Haradinaj, only allocated a budget to help pay compensation to victims last month. From January 2018, survivors of war-related sexual violence will be able to apply for the status for victims and will be entitled to monthly compensation of 230 euros, paid for from the state’s budget.

While AI welcomes the allocation of the budget, the organization strongly criticized the continued denial of access to justice for survivors.

Jones emphasized the lack of convictions for the war-related sexual violence that took place in Kosovo. The International Criminal Tribunal for the former Yugoslavia (ICTY) did prosecute three of Serbia’s most senior political, police and military officials for their “joint criminal enterprise” of war crimes and crimes against humanity in Kosovo, which included “sexual assaults” as a form of persecution. But to date, courts in Kosovo and Serbia have failed to convict anyone in relation to war-related sexal violence.

Jones was particularly critical toward the UN Mission in Kosovo (UNMIK) mission: “We examine in the report how, in many reports that were made of conflict-related sexual violence by survivors in the years that followed the war, UNMIK failed to promptly register [or] investigate those cases, and even if the cases were investigated they failed to get back in touch with the survivors to tell them what the status of their case was.” 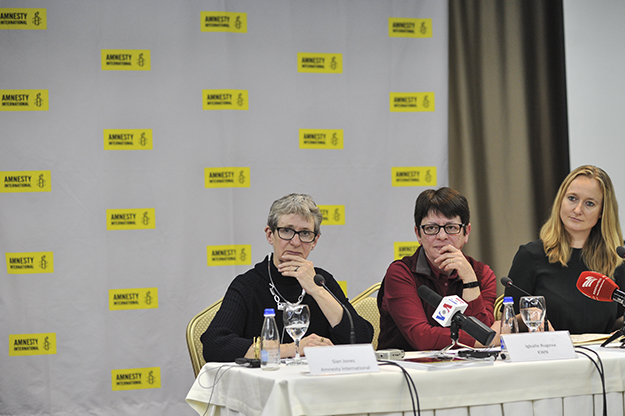 Amnesty International’s Sian Jones (left) highlighted that there has not been a single prosecution within Kosovo or Serbia for crimes of war-related sexual violence. Photo: Atdhe Mulla / K2.0.

The report point outs how EU Rule of Law Mission (EULEX) police and prosecutors also later failed to effectively address UNMIK’s legacy of hundreds of uninvestigated war crimes. According to Jones, as war crimes cases are now being transferred to the Kosovo Special Prosecution’s recently established Department for War Crimes it will be a massive burden for the new prosecutors to deal with this legacy, and she called for more resources to be added to the prosecution team such as sufficient and trained staff.

She said that even when there are cases ready for prosecution — when a perpetrator or multiple perpetrators have been identified — there still cannot be proceedings unless those people can be arrested, either though the use of international arrest warrants or if they happen to enter Kosovo.

“In our recommendation we encourage politicians in both Kosovo and Serbia to works towards this, whether it is in the context of high level talks in Brussels or whether it is on a more bilateral level, but certainly it will be extremely difficult to expect women to have access to justice or for more than a few women to have access to justice if that barrier is not taken away. We are very concerned about 18 years without justice. It is a very long time,” Jones said. “We must all push the authorities to come to some agreement that enables cooperation and that enables prosecutions.”

Discussing it’s second key area, reparations provisions, AI particularly raises concerns at how the current legislation — which uses the end of the war on June 20, 1999, as a cut-off date for the eligibility of potential victims — excludes all those women who suffered sexual violence in the aftermath of the war, when fighting had technically ended; in this way the legislation particularly discriminates against Kosovar Serbs, Roma and some Albanian women.

Jones said that UNMIK collected 135 reports of sexual violence in the second half of 1999, i.e. in the period after the cut-off date used in the current legislation. “We are suggesting that, just like the Law on Missing Persons that has a timeframe that ends in December 2000, that that would be very appropriate for this particular group as well.”

Jones highlighted how the report identifies that current provisions still fall short of those set out by international standards relating to the victims of war-related sexual violence. One such failing is survivors’ lack of access in current reparations provisions to free or affordable health care.

"When I talked to survivors it was clear to me that there is an overwhelming need for health care.”

The report says that while other civilian victims of war in Kosovo receive free primary and secondary health care, this is denied to survivors of war-related sexual violence, who are eligible only for the largely impractical option of receiving treatment abroad. The law does not provide for psychological and psychosocial assistance, both critical to recovery and provided to date by NGOs.

“When I talked to survivors it was clear to me that there is an overwhelming need for health care,” Jones said. “They spoke to me and talked about illnesses that were based on physical injuries that they had actually received during the war, while they were abused, raped, beaten, while they were tortured, as we know under international law … rape amounts to torture. [It has had] a serious impact on their lives, on their bodies and on their minds, and everybody carries with them those wounds, those scars, sometimes not just physical but always psychological.”

Jones added that government needs to initiate sustainable programs that will contribute toward survivors’ economic empowerment.

The third point highlighted in the report is the need to end the stigma surrounding war-related sexual violence, with AI calling for it to be challenged in order to enable survivors’ voices to be heard in their communities, without condemnation; this would allow them to apply for compensation and other benefits, without being ostracized by their families or communities.

“The overarching concern that we focused on at the end of the report is the stigma that is so impeding so many things. Not just for women who survived rape, for their families and for the whole society. There is a need for change,” Jones said. She concluded that it is the duty of politicians and the government to help transform the culture by loudly promoting not just the rights of survivors but also women’s rights in general.K