NATO’s intervention brought hope, but also retaliation, forcing many to flee their homes.

My father’s incessant applause and fiery enthusiasm woke me up early on the morning of March 25, 1999. A quick glimpse of the TV told me why he was so elated. During the night, NATO aircraft had commenced a bombing campaign against the Federal Republic of Yugoslavia. I jumped up and hugged my mother and father tightly. It wasn’t just me, a naive 10-year-old, who was full of hope; we all thought that the end of the war was only a matter of days away, that the hard times were nearly over.

We were quickly proven wrong. Only two days later, a fresh wave of people displaced from their homes flooded into the village. People, including members of our family, knocked on our doors for shelter.

After the first bombings, the reprisal of the Serbian forces against civilians had been brutal. The displacement of our family members from their homes frightened us all. Just two months before, we had heard about the dreadful massacre at Recak (just a few kilometers away from our house), where 45 civilians were slaughtered by Serbian forces. It all added to our anguish. Adults were on guard during the nights, fearing a sudden attack. We stopped undressing before going to bed, ensuring we were ready to move at any time. 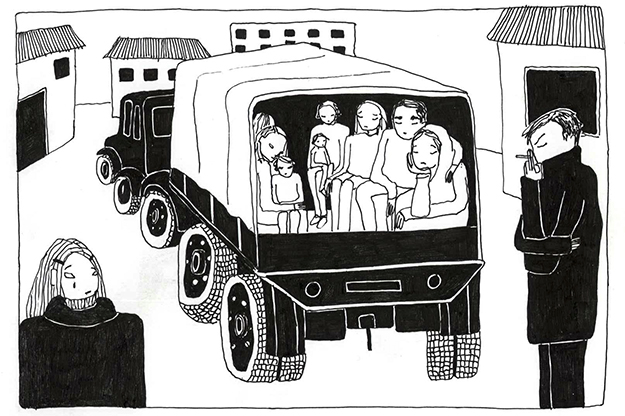 Just three days after we received the refugees, I was playing soccer in the garden with the other younger members of my family when our game was interrupted by distressed cries resounding around the village. We were hastily instructed to jump on to a truck. Tanks were approaching.

We all got on board quickly. Our names were called out again and again to make sure we were all where we should be. One person wasn’t: my 80-year-old grandfather. Waiting for him became unbearable. My heart was pounding. In no rush at all, he was asking my older brother Fazli which shoes he should bring — the ones he’d bought in Ferizaj or the ones from Skopje?

Back on the truck, the younger children seemed to be having a competition of who could cry the loudest, and my grandfather’s slowness had enraged another member of his generation, who was tired of waiting. He stood up and shouted “Fazli! Leave him! He is an old man.” The entire truck broke out in incredulity. “Oh, and you’re not?”

At any moment, this unintended comedy could have turned into a tragedy. But my grandfather eventually joined us, stepping into one of the cars that followed the truck in a convoy out of the village. The neighborhood was evacuated in a just a few minutes, with people driving like madmen and running to clamber onto any of the vehicles they could. The speedy driving left a veil of dust behind, accidentally leaving a signal to the Serbian forces — traces of the prey they were after.

We drove to the nearby village of Vojnoc, and felt a sense of escape and release. We had traveled only a few kilometers, (days later, when I climbed the trees, I realized I could see the roof of my house) but the Serb forces that had been approaching in the tanks had occupied our village. We couldn’t go back. So close to home but so far.

During the week, we had almost forgotten about the NATO bombing campaign; it was then that we understood the high price we had to pay for NATO’s attacks. We were supported from the air but defenseless on the ground. Hope and fear at the same time.

In Vojnoc, my family were sheltered by an older couple whose sons had emigrated to Germany. More than 30 of us shared their house. The elderly couple were incredible hosts. Their solidarity and generosity toward so many new guests was amazing.

Our ears were always waiting for the terrible sound of tank chains hitting asphalt.

However, we had left our home empty-handed and food became a serious concern. Some sugar sprinkled onto a slice of bread became a meal. The hunger was only intensified by the knowledge that our fridge was only a few kilometers away, full of food.

One day, I discovered that a bag of dried apples was hidden in a bedroom. I asked the old lady if I could take a fistful of them every day. She kindly told me I could, but not to tell the other children, lest the apples quickly run out. I kept the secret religiously and every day I would stuff my pockets with dried apples and run out of the house to eat them in secrecy by the river.

The lack of food wasn’t our only concern. Every night, people were on lookout to see if the tanks would move in our direction. Our ears were always waiting for the terrible sound of tank chains hitting asphalt. People hoped that NATO would not target our region, fearing that it would lead to angry reprisals against us.

After 20 days, we stopped hoping that we would get back home. Malnutrition and the daily anxiety of living in fear pushed the whole extended family to consider moving to the refugee camps in Macedonia. Vojnoc had overrun with displaced people, and most eventually left. Every day, more people were leaving. Most of our relatives had already gone.

My parents, my grandmother, my two sisters and two brothers, my uncle’s wife and her four kids — they all decided to leave for Macedonia together, as a group. The day before, my grandfather, another uncle’s wife and her three children had already crossed the border. My uncle remained in Kosovo to fight with the Kosovo Liberation Army (KLA). We all agreed on the decision to split the family into two groups. We divided to increase the family’s chance of survival. No point in us all being killed together.

The day we left, there was heavy rain. The number of people waiting at the train station was double the capacity of the train. The overcrowding led to lots of wrangling between people, fighting to get on the train.

That was the moment I understood what a mother is ready to do for her children.

After a few hours, we arrived at the border. We waited there for hours in the pouring rain, heads down and silent. My father warned us not to do anything to antagonize the police, who were handing out beatings to others in the queue and turning people back from the border. Nobody knew where those being turned away were sent. I didn’t know if people were crying or had rain pouring down their faces.

Eventually, half the family managed to cross the border, but my two older sisters Sadbere, 19, and Imrane, 18, along with my father, remained with the crowd in Kosovo. Despite the relief of being allowed through, of the ordeal being over, my mother insisted that she wouldn’t continue without them. She headed back toward the crowd on the other side of the border, leaving me and my brothers with our relatives. “I don’t go anywhere without them,” she said. That was the moment I understood what a mother is ready to do for her children.

Luckily, the border police had shown some mercy and let another group of people cross the border, including my father and two sisters. We were all reunited as we waited for the buses that would transport us to Stankovec II, a refugee camp surrounded by barbed wire. As we stepped off the bus and into the camp, my two brothers fainted. The medics reacted quickly, taking them to the improvised hospitals. Volunteers accompanied us to our tents.

Here we were, sharing a giant tent with 70 strangers, but already starting to adjust to a new life — one with abundant food and without fear. My brothers eventually joined us in the tent. One of them had been presented with some new tracksuit pants. I was so jealous, I wished I had pretended to pass out as well. 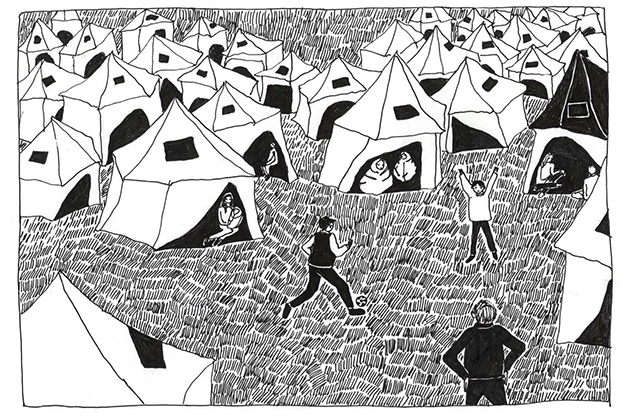 I soon started to like life in the camp. I bumped into a few of my old classmates and my cousin Visar. We had huge games of soccer, English classes for the first time, and the freedom to roam across the huge camp. Sometimes, it was hard to find your own tent, as hundreds of them were scattered across the hill.

But the hope of going back home and reuniting with our uncle seemed distant. We were glued to the news and knew that the bombing campaign was continuing. Everyone was talking about the NATO intervention extending to the ground.

Two months later, on June 10, we were saluting a convoy of NATO troops who were heading to the border with Kosovo. They were preparing to enter the territory in order to enforce an agreement. The sight of them buoyed our faith that we would soon be back home.

However, my family remained refugees for a short while longer. From Skopje, we flew to Denmark and started a new life, but decided to come back to Kosovo the next year. The return was extraordinarily emotional. The route from the airport in Prishtina back home was littered with military checkpoints. Such checkpoints had always meant fear and guns. This time, friendly NATO soldiers returned the V-sign salutes my brother and I gave them. We were really living the victory.K

We are barely scratching the surface of sexism [...]

It’s time for transparency in Kosovo’s [...]

Do youth votes matter in Albania?

What next for Kosovo’s economic zones?