Seeking a seat at the table of white supremacy

Anti-Muslim sentiments in the Albanian diaspora.

I remember the first time someone assumed that I was Muslim very vividly.

In Dutch primary schools, Christmas is celebrated with a Christmas dinner at school: Each child is asked to ask their parent or caregiver to make their favorite food and bring it to the dinner, so we can all enjoy a nice meal together. I look back at the pictures taken of my first Christmas dinner, and I see an extremely happy child. I smile from ear to ear in all pictures, which, to be honest, is how I still look when I’m in a room full of food.

I don’t remember the pictures being taken, but I do remember that at one point I walked over to a table on which I saw a plate full of sausages. I remembered all the cartoons I had seen on TV and the hotdogs the characters ate: They seemed delicious, and I couldn’t wait to finally try them myself. My mom tried to keep us away from processed food as much as possible, so I was happy she was not around.

As I grabbed a fork to put a sausage on my plate, my teacher came running my way and told me: “Kosovare, you can’t have those” — without any further explanation.

I was confused. I looked over to the plate; there seemed to be plenty, why could I not have one? Were they really that unhealthy as my mom had told me, and if so, why were they brought to the classroom at all?

Rarely does anyone guess my ethnicity, despite my name somewhat giving it away.

I didn’t challenge authority at all at that age (the good old days…), all I remembered was my mom’s voice in my head saying: “The teacher is always right,” so I listened and stepped back.

I became even more confused when I saw other children eating the sausages my teacher had stopped me from eating. It felt unfair, so when she wasn’t looking, I snuck a sausage in my mouth anyway (and I was sold: This was my favorite food now).

When my mom picked me up, I told her about the “incident,” and how my teacher hadn’t allowed me to eat the sausage I so badly wanted to try — leaving out the part that I sneakily ate them anyway. She started laughing and said: “They were probably pork sausages, and your teacher probably thinks we are Muslim and therefore aren’t allowed to eat that.”

Having almost black hair, black eyebrows, and simply not looking like the standard native Dutch person, I’ve always been mistaken for being either Northern African, Turkish or Middle Eastern. Rarely does anyone guess my ethnicity, despite my name somewhat giving it away. Because of this, people also automatically assumed I was Muslim and could therefore not do, eat or drink certain things.

It’s true that I was raised with certain Muslim norms and values, but I never identified with the “Muslim label.” Until age 12, I was in search of a religion that I could identify with; then I found out it was OK not to believe in anything at all, so I’ve identified as an atheist ever since.

Growing up in the era after 9/11, anti-Muslim bigotry was continuously on the rise. I remember getting slightly annoyed when people assumed that I was Muslim, as if that was a bad thing. As an ethnic Albanian in the diaspora, especially in Western Europe, I was constantly othered and racialized: Sometimes I belonged to one ethnic group and others to another. I felt like I lost control over my own identity — if I ever had control over it to begin with.

Learning more about the history of the Ottoman occupation and how it affected Kosovo, I remember feeling annoyed in a different way: “How could the Dutch make the assumption that I’m Muslim, that I’m equal to the people who oppressed me and my people for so long?!”

Muslims being stigmatized in the Netherlands played a big part in this too. I’d probably not have felt bad at all if Muslims were not stigmatized and marginalized: Had they, as a group, been associated with positive things, I would have perceived it as a compliment.

But as it was, I felt offended. My train of thought, simply put, was as follows: “The Dutch assume that I’m Muslim, and being Muslim is seen as something negative, and because of that I’m marginalized” — blaming the oppressed group, namely Muslims, instead of the Dutch, the oppressor of all minority groups in the country.

Of course, I recognize how problematic that way of thinking is now, but I need to own up to my problematic ways of thinking in the past: I was not born “woke.” The knowledge I have gained over the years is all due to unlearning and relearning — something I am committed to for the rest of my life.

I recognize, see, hear and read my past problematic thinking patterns a lot when talking to other Albanians who grew up in the diaspora — in Kosovo too, but for the purpose of this article I want to focus on the Albanian diaspora, as ethnic Albanians in Kosovo do not have to fight for acceptance in a society where they are the dominant group.

Albanians in the diaspora like myself try so desperately to fit into the societies we are born and/or brought up in, that we distance ourselves from anything the dominant group — in my case, the Dutch — despise. One of those things is Muslims, a very easy target in the West.

I hear the most hateful things come out of the mouths of diaspora Albanians when Islam is discussed: “Thanks to ‘them,’ our people are still stuck in  medieval times”; “It’s because of ‘them’ that people think all of us are Muslims and therefore associate us with danger and terrorism”; “It’s a backward religion” — as if the Islam and Christianity do not have more similarities than differences; and my personal favorite, “It’s not a European religion” — as if Christianity originated in Europe.

While saying all these things, we fail to realize that the real problem is not Islam, the real problem lies with orientalism and the way the West has framed the Islamic religion. We wish to distance ourselves from our oppressor, which is valid. However, critiquing the systems set up by our oppressor is different from demonizing an entire religion.

I noticed anti-Muslim sentiments rise even further amongst the Albanian diaspora after fellow Albanians back home in Kosovo decided to fight alongside the Islamic State. Kosovo made highlights for having “a lot of jihadists” for such a small country and Albanians in the diaspora were, once again, quick to let the West know that we are “originally a Christian country, the jihadists and their families can die! We don’t care about them, we are different!”

I sense a feeling of superiority coming from Albanian Christians and Albanian atheists like myself.

When the first Syrian refugees started to arrive, much of the Western media was quick to label them as (potential) terrorists. I remember fellow diaspora Albanians writing posts on Facebook, distancing themselves from the Syrian refugees: “We were real refugees, these are just terrorists — I would vote for the closure of borders to protect Europe.”

I sense a feeling of superiority coming from Albanian Christians and Albanian atheists like myself. We truly believe that we will be accepted as “one of them” so long as we play along and step on marginalized groups as much as the dominant group — if not in a more extreme way to prove our loyalty.

I remember my mom telling me: “You can do anything you like, eat all the pork you want to, but remember that they will never accept you.” I think back on these words a lot.

Despite being brought up in the Netherlands, and despite the Dutch citizenship being the first and only citizenship my mother, my siblings and I have ever had — I’m still not accepted as a full member of society, despite all my efforts to fit in. In August I’ll obtain my fourth law degree, and I have volunteered and worked for a number of years during my studies, but I am still not fully accepted.

Over the past 23 years of living in the Netherlands, the native Dutch have not changed their attitude toward me, but my attitude has changed for the better: I no longer feel, nor will I ever feel, better than — or even superior to — Albanians, or people in general, who are Muslim and wish to practice their faith.

I no longer feel offended when people assume that I’m Muslim. I no longer feel the need to critique Muslims, or people identifying with any other religious group, for doing something I personally would never do. There is nothing wrong with being critical of a religion, any religion, but to demonize those who wish to practice their faith — specifically Islam in the Western world — in an effort to distance yourself from that religion and to fit in, is not OK.

Now, when I tell people I don’t drink alcohol and they say, “Oh, yeah, sorry, I should have known, it’s because of your religion, right?” I simply laugh and tell them I didn’t know atheism didn’t allow people to drink.

The Western societies we have grown up in have made us feel not worthy to sit at the table. So by repeating the hateful rhetoric they taught us when anti-Muslim bigotry was normalized, we try to show them that “we are really not that different, we are European too, and we also want Islam out!”: It’s a quite pathetic and mostly desperate attempt to get a seat at the table of white supremacy.

We have to remember that all oppression is connected: So long as one group of people is oppressed, we are all oppressed. Even if you are not accepted into the dominant group as an individual because “you’re different,” please remember your acceptance and freedom is not worth a lot when your acceptance is due to stepping on and over other marginalized people. 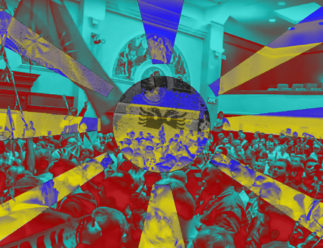 The scapegoat of Greater Albania amid rising... 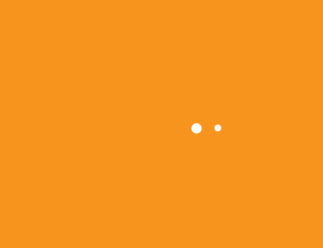 Where is Kosovo’s left? 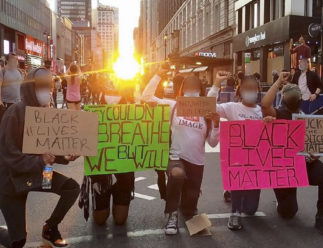 The law that rocked Montenegro