The police line surround the entrance to the home address Dunavski kej, nr. 20, in downtown Belgrade. Dressed in their blue shirts, they stand close to each other, attempting to swallow their pride as they try not to hear curse words so juicy it would be impossible to ignore them. Sun rays land on their foreheads penetrating through the tree branches in front of the building in which pensioner Branka Havatmi lives with her son with cerebral palsy. In their apartment, is the contractor Nenad Botoric, attempting to convince her to leave her home in which she has been living for more than 20 years.

In front of the police ‘living wall,’ an angry old lady with a purple shopping bag, a big guy in camouflage trousers with a ‘Strong Serbia’ T-shirt, a skinny girl with dreadlocks and an anarchist sign over her chest, neighbor Milica from across the street and ‘friend Goran’ who is furiously screaming at the men in blue by yelling “enemies of the people, you are the enemies of the people.” 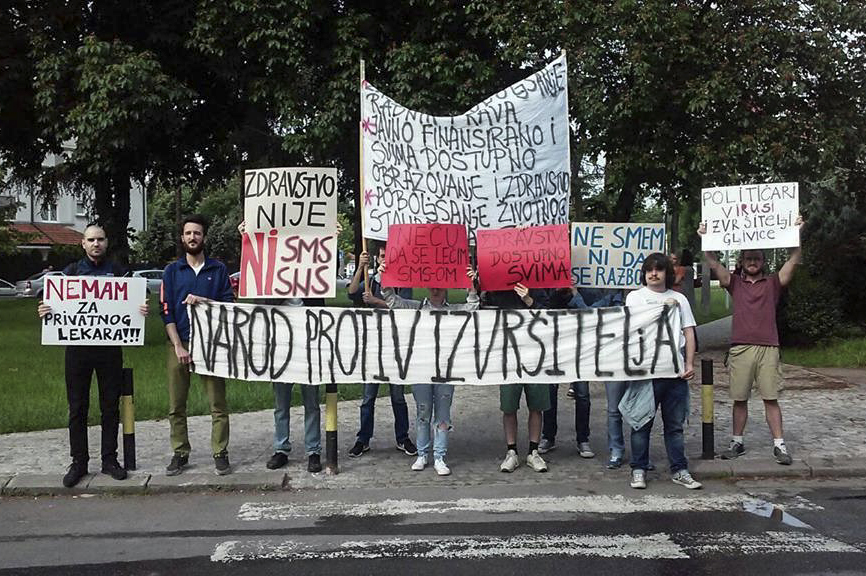 Different groups and individuals are united against forced evictions and in attempts to help to the families who are forced to leave their homes. Photo: Isidora Petrovic.

Members of the parliamentary party Dveri in ash gray suits, professor of contemporary political theory Djordje Pavicevic, activists of the Ne da(vi)mo Beograd (Don’t Drown Belgrade) initiative, members of the Social Democratic Union, and those from the Sedam zahteva (Seven Demands) movement, but also nationalists from the Cuvari andjela (Guardian Angels) movement. A few meters from them, in the shade, sits Radomir Pocuca, who has been handed a suspended prison sentence due to participation on the side of Russian forces in the war in Ukraine, and Nemanja Ristic, suspected by Montenegro of participating in the attempted coup in October last year.

This ‘compound of the incompatible’ has become part of the standard scenery in Serbia since the introduction of ‘public’ contractors in 2011, with forced evictions representing the ever-enlarging finger in the eye of the impoverished citizenry. Leftists, right-wingers, neighbors, and ordinary citizens are gathering side by side in order to protect tenants threatened by the enforcement agents.

Due to a debt of only 6,500 euros, the contractor sold an apartment of 48 square meters in an elite Belgrade neighborhood for a total of 26,000 euros.

However, in the case of the pensioner Branka Havatmi, civic pressure didn’t bear fruit and, after seven hours of painstaking struggle, blocking the exits to the building, and bawling on the eviction trucks, she decided to leave the apartment on her own.

“They would additionally charge me for the eviction,” said a visibly shaken Branka, while her son Tarek was being taken away by ambulance. “It is better if I pay them to carry the stuff out.”

The Havatmi family case attracted significant public attention as it is an excellent example of, as the Serbian proverb goes, “slaughtering an ox for a kilo of meat,” that is — the violation of the proportionality principle that prohibits the enforcement agents from selling some portion of somebody’s property due to a debt that is significantly lower in value than the sold property.

Namely, due to a debt of only 6,500 euros, the contractor sold an apartment of 48 square meters in an elite Belgrade neighborhood for a total of 26,000 euros, even though a square meter of residential space here could be sold for more than 1,300 euros.

Even though the Havatmi family, through their lawyer, offered the contractor, Botoric, to pay off the debt prior to the first bids, he ignored the request. Also, 110 days after he had sold the apartment, the Havatmi family had still not received the sale documents, even though this is a legal obligation. The Chamber of Public Enforcement Officials has so far failed to conclude that there have been procedural violations in the case, whereas at a later stage they will decide on whether Botoric artificially inflated the expenses of the entire process.

Efficacy at the expense of fairness and social justice

Introducing the public contractor institution into the legal framework in 2011 was presented as a measure to lighten the burden of the preoccupied courts in Serbia, but above all to contribute to a more efficient collection of debts for public utilities and other services.

However, just as with most other “transitional reforms,” the purpose of which is improving “the business climate,” practice shows that the biggest victims of contractors have been the poorest citizens — those who have the biggest problems in paying public utility debts due to the extremely difficult social position that they are in.

In order to speed up the debt collection process, contractors received significant authorizations, whereas debtors’ rights have been completely reduced, making them victims of a joint corrupt endeavor of the contractor and creditor.

Namely, despite the law defining contractors as “public contractors,” in real life they are performing the function of private businessmen who directly work for the creditor and whose goal it is to maximize profit and have a more effective debt collection.

A working group that suggested amendments to the law evaluated that the 2011 law represented “a civilizational decline of the rule of law in Serbia.”

Precisely due to such a structural position of the contractors, there have oftentimes been epidemic rises in costs, where the original debt has increased several times, but also there have been property auctions that have been fixed in advance. Additionally, citizens have complained that eviction notices have not been delivered to the right addresses, meaning citizens are often unable to file a complaint in a timely manner.

However, after citizens’ complaints, but also following criticism from the Ombudsperson and the Anti-Corruption Council, the law was changed in 2015. A working group that suggested amendments to the law evaluated that the 2011 law represented “a civilizational decline of the rule of law in Serbia,” due to which, “for the sake of speed, a clear course of action is sacrificed, total insecurity is provoked, rights of parties are being violated, and the law of the stronger and more unscrupulous is introduced.”

However, the change to the law was of a superficial nature, because even though the debtor was given an opportunity to file a complaint, thereby theoretically postponing the execution of the eviction, in practice it hasn’t helped him or her much, which is why there are a huge number of civic complaints, but also disturbing eviction scenes, such as the one with the Havatmi family.

The presence of police is as an obvious sign of the state support for forced evictions. Foto: Sara Nikolic.

The only real success of the change in law is the amendment to the way in which cases are assigned, which effectively broke the chain of corruption between the contractor and the public enterprise creditor. Namely, according to the 2011 law, cases were assigned in accordance with the location of the head office of the creditor, not that of the debtor, thereby increasing costs, meaning public enterprises didn’t enact public procurement procedures in the course of contractor selection, but had their own “favorite contractors.”

However, one of the biggest issues is the monitoring of contractor activities. The control of contractors is performed by the Chamber of Public Enforcement Officials and the Justice Ministry through the complaints procedure. Competent courts also decide on this, in accordance with legal remedies.

However, bearing in mind that the Chamber is a profit-based association, which, understandably protects its own profession, whereas the Justice Ministry introduced contractors into the legal framework, it is easy to understand how the monitoring of the work of contractors is not at a satisfactory level.

The way in which contractors function in Serbia is a paradigmatic example of how a legal state framework works in a financially dependent state on the semi-periphery of capitalism, where the legal framework serves for a business acclimatization to foreign investors, banks, and domestic tycoons; citizens are the ones who most often pay the price.

Social justice has been exiled as a fatal legacy of “totalitarian socialism.”

In a country in which there hasn’t been a property census, citizens don’t have a right to personal bankruptcy and every fourth citizen is on the edge of poverty, the contractors — as businessmen masked in the suits of public officials — represent the criminal mission of the most powerful people deprived of any social sensibility or care for the public interest.

The then deputy justice minister, Nela Kuburovic, was awarded by the National Alliance for Local Economic Development (NALED) in 2015, for contributing to the improvement of the Law on Eviction Execution. The next year she became justice minister.

“In this manner we are fulfilling our obligations from strategic and action plans for the 23rd Chapter in the negotiations [for EU accession], we are contributing to a better investment climate in Serbia and the improvement of Serbia’s status in the world Doing Business List,” Kuburovic said during the Third Annual Counseling of Public Enforcement Officers in March this year.

“We will not let go” is the message citizens left together with sandbags at the entrance to the Havatmi family’s building, trying to prevent their forced eviction. Photo: Sara Nikolic.

Officials and statespersons of Serbia are regularly receiving commendations from European and international economic institutions due to the reduction of the state’s civic service role into an agency for attracting large capital, but also for the implementation of “austerity measures.” In the given context, contractors are one of the elements in enacting what neoliberal technocrats call “fiscal consolidation” in order to mystify the notion.

However, bearing in mind that the “belt tightening” is always referring to those with the thinnest wallets — in a country where social justice has been exiled as a fatal legacy of “totalitarian socialism” — we cannot name them as anything other than “debt collectors” and servicemen of the most powerful in the exhausting and endless transitional class war.