Smashing patriarchy and heteronormativity one virtual platform at a time - Kosovo 2.0
In-depth | Feminism

Smashing patriarchy and heteronormativity one virtual platform at a time

Feminism speaks Albanian more than ever: four online platforms to prove it.

Smashing the patriarchy has always been an arduous task and it is not news that sexism, homobophia, transphobia, racism and the inequalities of our well-functioning, healthy capitalist system are not only present in our media space but also reinforced and perpetrated over and again. To combat that, in recent times, there has been an exciting bloom of feminist and queer online platforms in the Albanian language; fighting for a change in the narrative and in reality, to one where patriarchy and heteronormativity have their days numbered.

Often a merge between advocacy journalism, educational publishing and activism in the streets, feminist collectives of different types are coming together; and, perhaps boosted by the need for virtual spaces after a year of pandemic distancing, their voices are becoming louder in the online world — and beyond. Only in the past year a number of these collectives have brought their best to the online sphere, pushing for the greater presence of discussions on equality and diversity in the broader public debate.

We have spoken to the editors of some of the newest and more established online platforms in the Albanian language that identify as feminist and/or queer, to learn more about the reasons for their existence, the spaces they are creating, what they are fighting for, how they plan to smash the patriarchy and the rule of heteronormativity, one click at a time. 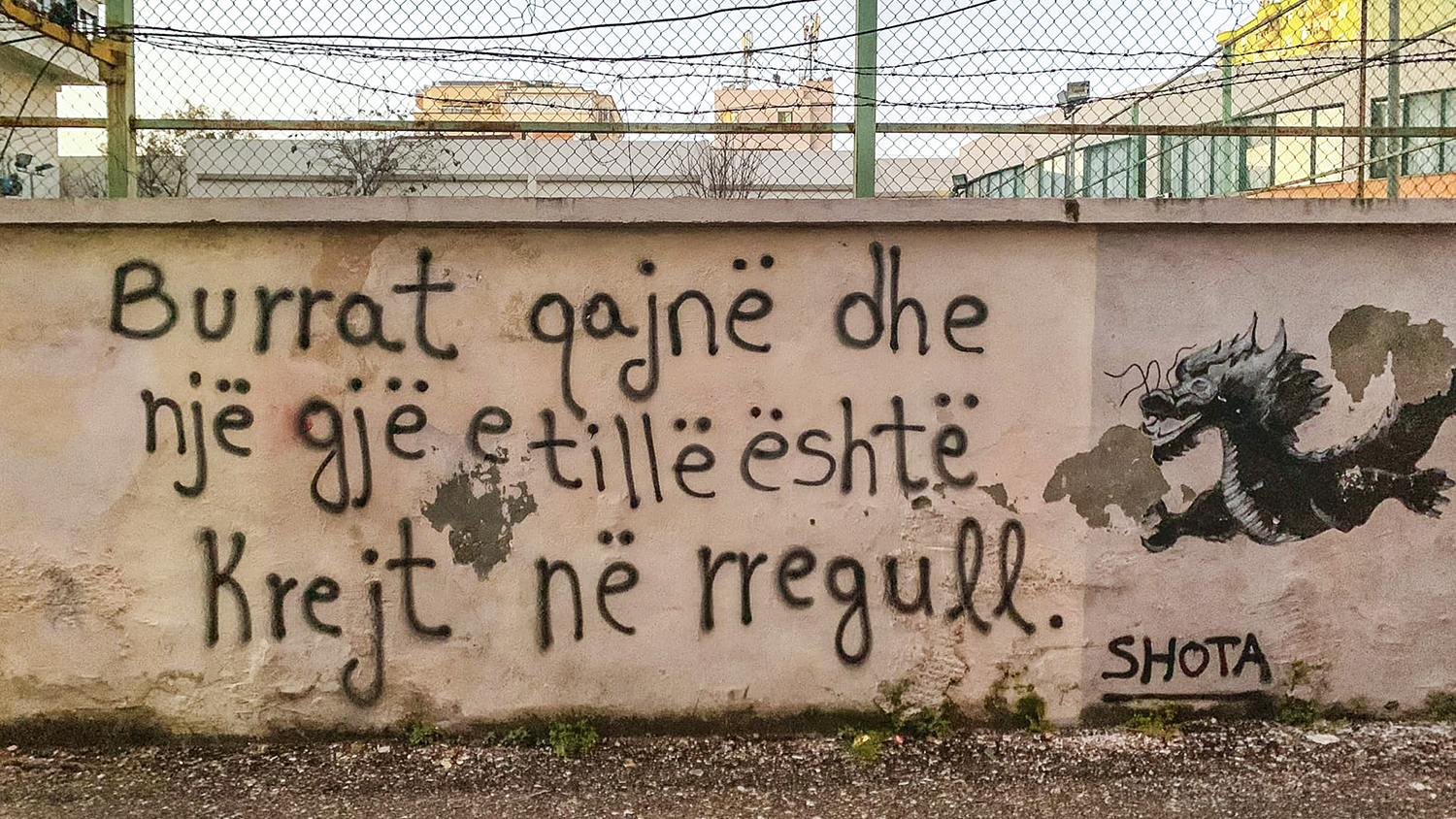 From street graffiti messaging in response to harassment and patriarchal violence in Albania, to the virtual world for Albanian-speaking visitors. SHOTA is a rush of fresh air in the online world, a breath apart from the newsy walls and a window into inspiring, creative, and challenging writing. With a name inspired by Albanian fighter Shota Galica, SHOTA is here to fight capitalism and patriarchy through a beautifully designed platform with carefully curated content from writers beyond the Albanian frontier.

The platform has been created by feminist activists Gresa Hasa and Liri Kuçi, from Albania, and besides special editions (see their presentation card, Nr. 01 “Frymarrje”), visitors can also enjoy ongoing articles from diverse regional authors and beyond, poetry, distinguished illustrations, online talks and more.

“Within a context where public space is conquered by patriarchal men, where speech is violent and there is a dominating discriminatory, misogynistic, homophobic, racist and arrogant discourse; where women are subjected to violence even on live television and on written media, the necessity for a space like SHOTA was urgent. [ …] 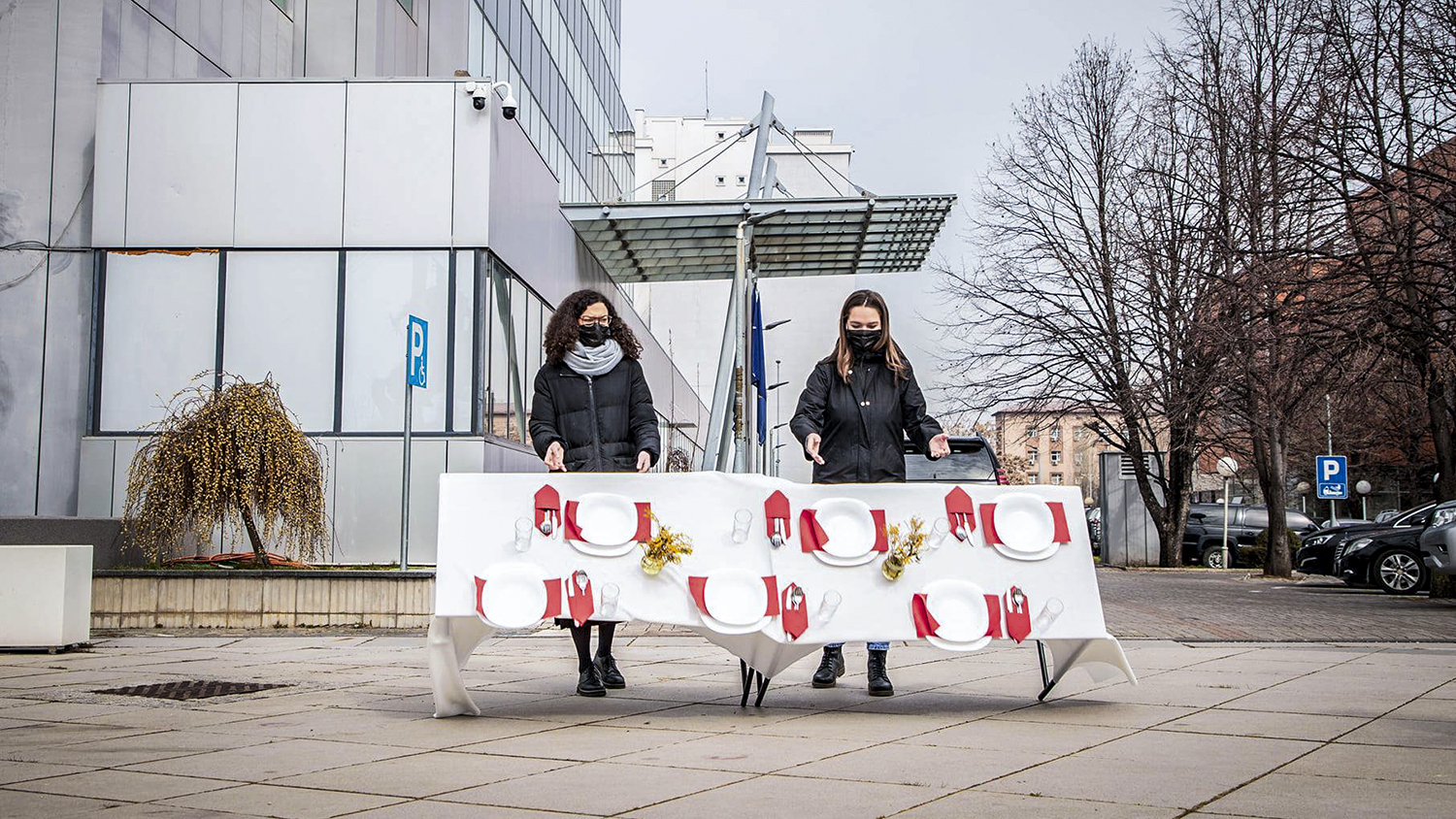 QIKA — The Center for Information, Critique and Action, is born with a spirit of advocacy and a desire to change the narrative of women’s representation and promote equal rights in Kosovo. Like the words behind the acronym indicate, QIKA is a feminist platform bringing to the forefront news and texts concerning women all over the world, but also studies, analysis and journalistic features that highlight the social, political and economic inequalities in society.

One of QIKA’s first analyses during the last electoral campaign was checking out the actual representation of women and women rights’ issues in media debates, a sign of some of the analytical work they are ready to provide to argue in favor of real representation in public debate. Like other collectives in this story, QIKA is ready to take to the streets to demand more; but they want to transform the narrative through journalism along with their activism, as a way to highlight marginalized perspectives in the media and the public discourse.

At QIKA’s feminist platform visitors will find news about policies improving the rights of women, writings on the Kosovar context about issues like the need to support students who are also mothers, or commentaries on inspiring women in the country; but visitors will also be able to find insightful reports on issues like the legal battle fought by Suzana Zogëjani-Sekiraqa, a woman convicted to 25 years in prison for killing her husband. Activists like QIKA said important mistakes were made during her court case and a retrial should be held.

“Even though there has been progress in recent years, the issues concerning women’s rights have been always treated less in the media, and in most cases the reports were filled with stereotypes. Media in Kosovo is also dominated by men, something that often influences their own agendas.

Knowing the importance and the power of the media to influence the collective awareness, we decided to enter the media space with a feminist platform. This initiative is an effort to enhance marginalized perspectives of women and girls in Kosovo.

The inclusion of the feminist lens in the treatment of events with political, economic, and social impact is one of the most appropriate and successful ways to highlight the problems that usually go unnoticed. [ …] Through sharp and bold research we aim not only to inform on these topics, but also to provide supported and argued critique on forms of oppression and inequality. The histories of oppression experienced by women inside the families, the workplace, the streets and inside the institutions will be reflected through our journalistic texts.

Their personal narratives will be revealed in order to call for solidarity and feminist mobilization. We believe that through fair reporting and research on topics that are not disclosed in society, we can influence the disruption of social order which is discriminating against individuals and social groups.” 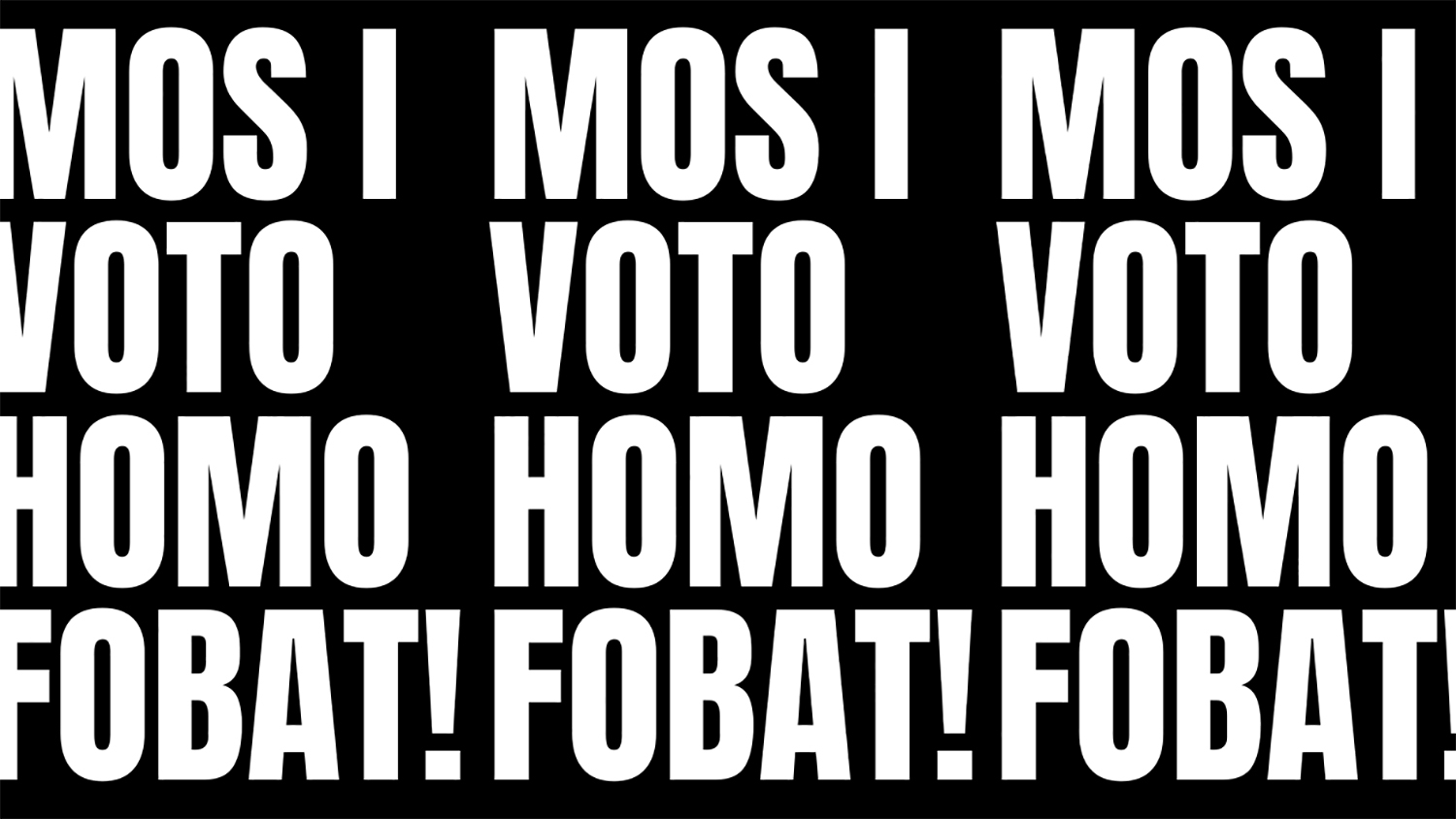 Dylberizm has been around for a while; since two queer activists from Kosovo started up an Instagram account in 2018 that broke all the molds for and about the queer community, and it has quickly become a loud and affirmative space for LGBTIQ+ representation and visibility.

Unfortunately, Dylberizm’s watchdog activism from the world of Instagram was recently suspended, while their work continues to live through other social networks and their website.

Educational, informative and particularly humorous and fun, Dylberizm is the first platform in the Albanian language dedicated to educate and inform the queer community (and others) on all things queer.

Unlike many other media in Kosovo, Dylberizm has presented LGBTIQ+ individuals not as an exotic “other” but as integral part of our society, by creating a safe space for queer individuals to share and therefore, allow meaningful discussions and narratives that concern real people.

One of the most powerful sections of Dylberizm is “Share your Story,” with anonymous personal stories shared by individuals in the queer community who may identify as lesbian, gay, bisexual, trans, or even nonbinary people — and others under the great queer umbrella. And while sometimes they are raw testimonies about suffering and struggle, often they are a unique window into stories of pure love, self-acceptance and inspiring growth.

Through both, the Instagram account and the web, sustained by volunteers mainly, Dylberizm speaks the internet language and educates us all on queer culture and arts, history, rights, sexual health, terminology and more. While also allowing fun through quizzes, memes and more importantly, through a space that is not always loaded with drama. Being queer is fun, let the record show.

Beyond that, Dylberizm is becoming a crucial watchdog for anti-queer rethoric in Kosovar politics too: During the latest elections, they published a list of homophobe candidates running for deputy that became pretty viral; and are joining efforts with the activist group Replikë. They provoked a public correction from newly appointed deputy prime minister for minorities and human rights, Emilia Rexhepi, on her previously declared position against same sex marriage.

“Even though our presence in the media is bigger, the approach is not always the best. In most cases, queer stories are reported in a sensationalist way, and portray the queer community as something exotic and new, and not as an equal part of society in Kosovo. [ …] We lacked a space where queer people, from all ages and backgrounds, could come together in a place, find themselves, participate in discussions and interact with each other.

So our approach came precisely as a result of this need that we had. [ …] We have been considered to be louder in political issues, and this has come because of the need to bring LGBTIQ+ issues into the public discourse in a time of political change in Kosovo.

In these times when the system is changing and we have popular mobilization for positive change, again LGBTIQ+ issues are left aside and we have seen this in the latest election, when not a single party had a proposal in their program concerning the rights of LGBTIQ+ people. Seeing the political moment, we see the need to push for LGBTIQ+ issues as much as we can.

The times for tolerating exclusion on the pretext that we have bigger problems in the country are over. If our public calls and exposing homophobes are not enough, we will take action in the street; which is also one of our approaches to fighting homophobia and transphobia. 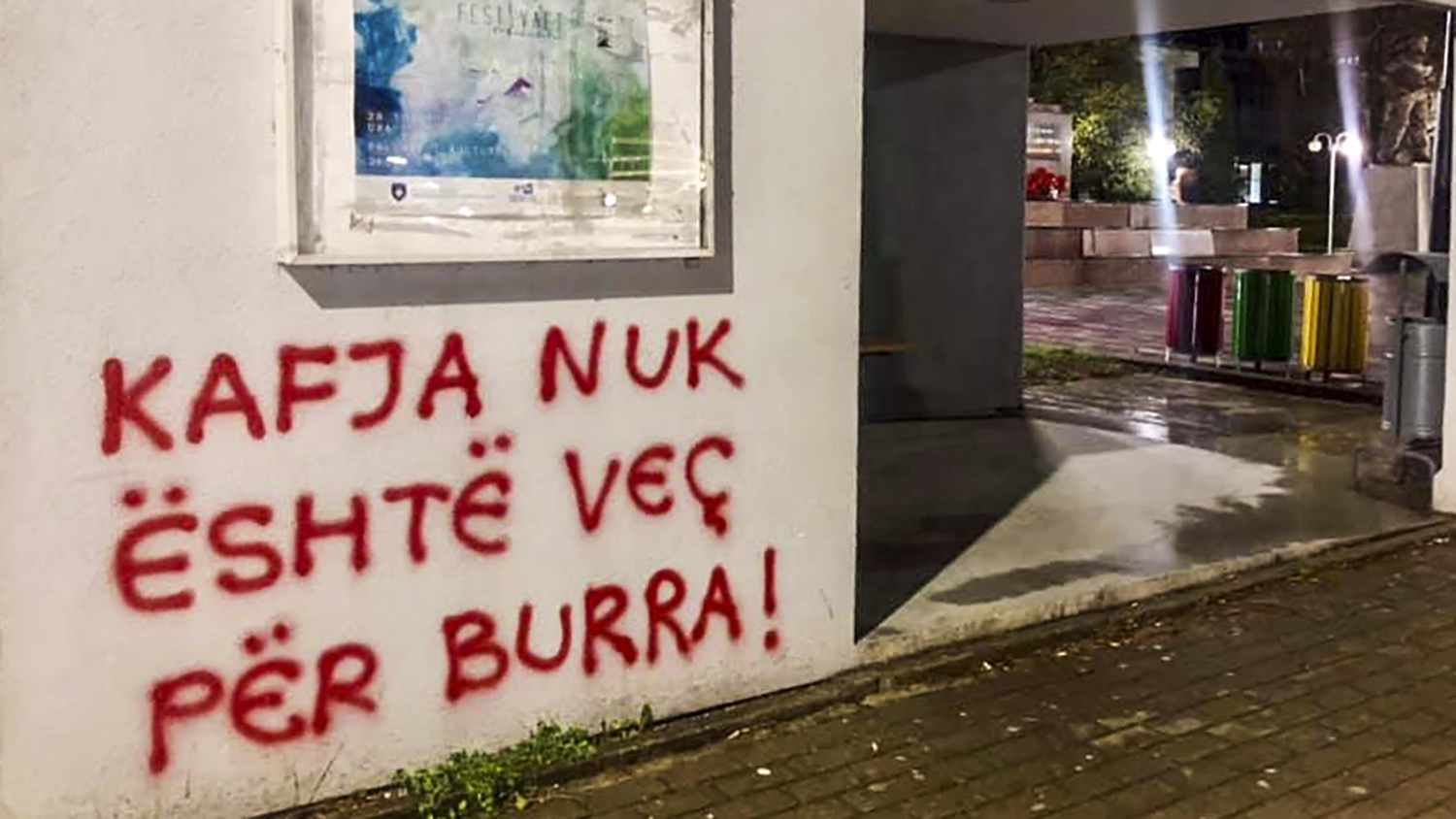 Photo courtesy of the Collective for Feminist Action and Thought.

COLLECTIVE FOR FEMINIST ACTION AND THOUGHT

The Collective for Feminist Action and Thought moves into a more theoretical dimension of feminist activity — but is not limited to it, as their name indicates. Building upon a merger between praxis and theory work. The Collective was born in Kosovo two years ago, in March 2019, bringing together feminist activists from the left with the goal of deepening feminist thought and discussion; as well as to organize protests, actions and interventions that, in their words, attack the capitalist patriarchy.

Since their birth, the Collective has held activities like public talks or reading discussions that introduced us to feminist theories and help articulate ideas like those coming from feminist readings into intersectionality, neoliberalism or academia; in ways that are more accessible than that one limited to a sociology class at university.

The recently launched website of the collective has been revisited to avoid overlapping other feminist online platforms, to meaningfully contribute to the range of feminist discussion and presence already out there. Visitors can access a range of feminist content, including translations of texts and videos in the Albanian language from internationally renowned authors like Audre Lorde and Angela Davis, as well as texts written by feminist authors in Kosovo who aim to contribute to articulating the ideas of Kosovar leftist feminism.

The Collective for K2.0:

“Since its founding, one of the key intentions of the Collective has been to create a feminist platform for producing and reproducing feminist knowledge in the Albanian language while including local context and experiences. [ …]

The way that the Collective intends “the production of feminist knowledge,” is by gathering already established feminist knowledge from abroad and reading about feminist movements globally as a way to find our similarities and differences and guidelines for creating our narrative and our local resistance. Through creating a reading group, organizing theoretical discussions, films and translations, we aim to educate ourselves and our comrades about oppression and methods of liberation, as well as about the necessity of feminist organization.

For us, gender, class and racial oppression are universal and they take on local nuance depending on the specific political and social context. Besides being crucial to a political feminist organization, raising our awareness on this is yet another push that begs for greater and more substantial mobilization to oppose this universal system, and this can only be done by sharing experiences and knowledge with each other.”K