They were the only people who did not honor the court by standing up when the presiding judge entered the room. Sitting on the benches of the accused, the four Vetevendosje activists charged with terrorism related to a rocket propelled grenade attack on Kosovo’s Assembly building on August 4, 2016, waited for what was planned to be the initial court hearing on their case.

All four wore white sweatshirts bearing the face of Astrit Dehari, the Vetevendosje activist arrested alongside them who died in custody in November; Dehari’s father, Avni, who was present in court, followed proceedings closely alongside family members of the accused.

But yesterday morning’s session, which was due to hear the charges read against Atdhe Arifi, Adea Batusha, Egzon Haliti and Vetevendosje’s spokesperson, Frasher Krasniqi, ended within an hour; it was marked with tensions and accusations by the defense lawyers against the case special prosecutor, Abdurrahim Islami, with the activists’ representatives demanding that Islami be removed from the case. In the end, this was the only issue considered during the session, and the charges were not read.

Arifit’s defense lawyer, Ramiz Krasniqi, did most of the talking, as he presented the court with a written request for the disqualification of Special Prosecutor Islami, whom he accused of pressing biased and political charges.

“There are court cases that appear in front of the court but do not constitute court cases,” he began. “Those are political affairs, but because of political pressure, instead of solving them in the Assembly or the government, they are brought to the court, and as such they are in themselves political affairs as is the case here.” 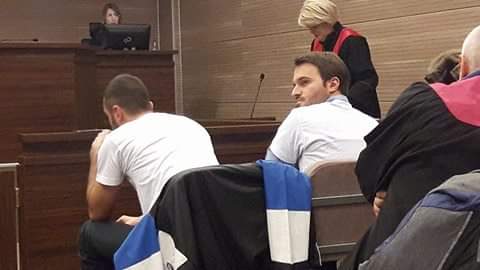 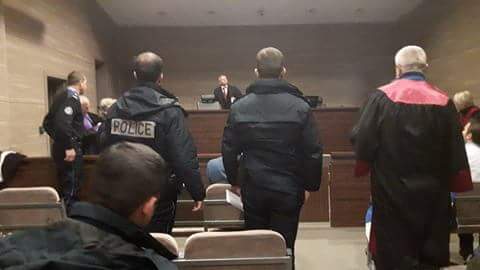 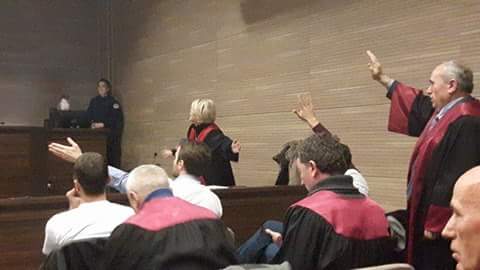 Krasniqi and his fellow defense lawyers were interrupted several times by the judge, Beqir Kalludra, demanding legal arguments and not “political” speeches.

“There isn’t anything one isn’t prepared to do for money nowadays,” responded special prosecutor Islami, alluding to the defense lawyers who, he suggested, were accusing him of filing a political indictment without any basis just because they are paid by the defendants to do so.

Ultimately, the judge suggested that the defense lawyers had no legal argument to back up their demand, but referred the issue to the chief state prosecutor, who is the person with the legal authority to decide if a prosecutor should be removed from a case.

The four opposition party activists, who will remain under house arrest until at least the end of February, confirmed in the session that they will use their right to speak during court sessions to defend themselves.

While the charges were not read in court yesterday as had been anticipated, K2.0 has obtained a copy of the 13-page indictment, in which the four accused are charged with terrorism; it is an offense that carries sentences of up to 30 years imprisonment. “Acting as a group and with separate roles from mid-July 2016,” the activists are accused of having prepared and planned “preparatory acts” towards attacking the Kosovo Assembly on August 4 last year.

The indictment reads: “The defendants have committed the criminal offense of ‘committing a terrorist offense’ under Article 136, paragraph 1 [which states that anyone convicted of terrorism will receive a minimum of 5 years in prison], in conjunction with Article 135 paragraph 1.7 [causing a general danger] and Article 31 [Co-perpetration] of the Criminal Code.”

According to the special prosecutor, this act was committed by the accused with the aim of instilling fear into citizens and to force the Assembly into rejecting the ratification of Kosovo’s border demarcation agreement with Montenegro, an agreement against which Vetevendosje has organized several protests.

The indictment, which does not include information on which of the accused is alleged to have launched the rocket-propelled grenade at the Assembly building, lists amongst the evidence the statements of nine witnesses as well as surveillance transcripts. Specifically, the indictment mentions “registration of phone calls, content of SMSs, legal transcripts, as well as the Court Order of 29.02.2016… .”

The date of the court order for covert actions suggests that one or more of the accused were under secret surveillance measures 6 months prior to the August 4 attack. However when K2.0 asked the special prosecutor to confirm this, he said that it may be a “technical error” and that no covert measures were taken against the accused before the attack took place. 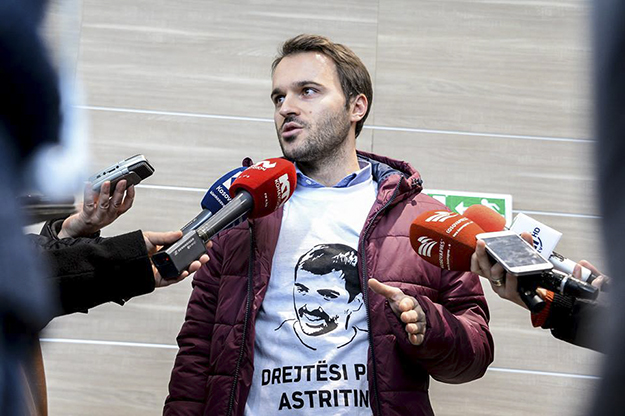 Vetevendosje’s spokesperson, Frasher Krasniqi, is one of four opposition activists accused of terrorism over a grenade attack on Kosovo’s Assembly building. Photo courtesy of Vetevendosje.

One of the primary pieces of wiretapping information included in the indictment, is a covertly recorded phone conversation between Krasniqi, and an individual who has yet to be identified. In the conversation on August 25, 2016, the unidentified individual asks Krasniqi if he is “free” (not in custody) and accuses him of throwing a grenade at Kosovo’s public broadcaster, RTK, in a separate attack on August 23. “Don’t throw those kind of things, don’t create unnecessary trouble,” he said, to which Krasniqi replied: “Hey, hey. These are serious accusations… we throw only words at RTK, as for those…,” at which point the evidence transcript ends.

According to the special prosecution, the conversation is one of 2,092 phone calls involving Krasniqi between the beginning of their surveillance following the attack, and the filing of the indictment against him on December 28; all these phone calls, the indictment claims, were made with the aim of creating an alibi for Krasniqi and others.

The starting point of the initial investigation was a semi-burnt out motorbike found in the Tauk Bahce neighborhood of Prishtina on the night of the Assembly attack; the motorbike had been used to launch the rocket propelled grenade from at the Assembly building, and for the attackers to get away.

The bike led police to the man who had sold the motorbike on the website ‘merr-jep.com.’ This person described to police three young men presenting themselves as students who had bought the bike from him — according to the indictment, the three people described were Atdhe Arifi, Egzon Haliti and the now deceased Astrit Dehari.

Six Vetevendosje activists were originally arrested in relation to the August 4 attack on Kosovo’s Assembly building, including Petrit Ademi who was later released.

Among the suspects was also 26-year-old medical student, Astrit Dehari, who died in custody on November 5, 2016, while being held at the Prizren Detention Center.

Frasher Krasniqi and Adea Batusha were linked to the investigation following an email sent to the media the day after the attack, claiming responsibility for it under the name “Residents of Rugova”; the email was sent from the email address ‘rigovasti12@gmail.com.’ The same day Kosovo Police requested the IP address of the device from which the “rugovasit” email was sent from Google; this information led to a cell phone, which had been recently sold to a Prishtina vendor.

The indictment states that by studying CCTV footage, police discovered that Batusha had bought the mobile phone in question. According to a witness statement from the mobile phone vendor that is included in the indictment, the young woman who bought the phone was interested in buying an Android phone and “wanted to know whether it was capable of sending e-mails, and whether its WiFi was functional.”

According to the special prosecution, electronic data was then used to trace the location from which the “Residents of Rugova” email was sent, leading them to Krasniqi’s address — a witness statement from a taxi driver, who claims to have driven Batusha to the same location from which the email was sent, is also included as part of the special prosecution’s evidence.

Other evidence listed in the indictment is a forensics report compiled after the inspection of the crime scene, dated August 5, 2016. The same forensics report has recently been published by Vetevendosje’s organizational secretary, Dardan Molliqaj, who claims that it contains no evidence linking the accused activists with the attack.

It remains to be seen whether the defense’s demand to have Special Prosecutor Islami removed from the case will be upheld by the chief state prosecutor. Once that decision has been taken, the court will set a date for the next hearing, during which the accused activists are expected to issue their plea of guilty or not guilty.K