Taste2: My music is a form of protest against the evils in this country - Kosovo 2.0
One-on-one | Culture

Taste2: My music is a form of protest against the evils in this country

Rapper says he contributes to Kosovar society through music that is against those who are “lying to the people.”

To Taste2, music is a form of protest. Because “that is how hip-hop was born — it is a revolt.” The rapper, who lives in France with his family, regularly comes to Kosovo solely for the purpose of his music. During his visits he often takes part in protests. He does not throw stones, but he does swear and whistle, as a form of protest against those who he says “are serving lies” to the people every day.

While Taste2 does not mind being in groups of people that revolt against the evils that he says have captured Kosovo, this act of revolt is also evident through his music. Author of the song “Pashtet” (“Without a State”), he frequently uses his songs to tackle social issues and to protest against society’s ills.

Originally from Prishtina, Taste2 — AKA Milot Hoxha — went to France during the war in 1999, a time in which many Kosovars left Kosovo.

The return of Kosovars after the war, hoping for a better life, brought Taste2 back to Kosovo too, but it did not keep him here for long. In 2003 he and his family decided to go back to France after living in Kosovo for three years. Since then, he has lived and worked in Marseille in the South of France, and these days his trips back to Kosovo are mainly motivated by music.

He has composed more than 80 songs, but never released them in a single album. This is because Taste2 makes music “for fun,” and not for business. Throughout his 17 year career to date he has become known as the rapper who frequently distances himself from the hip-hop scene. Now, after many breaks, it seems he will finally release an album. 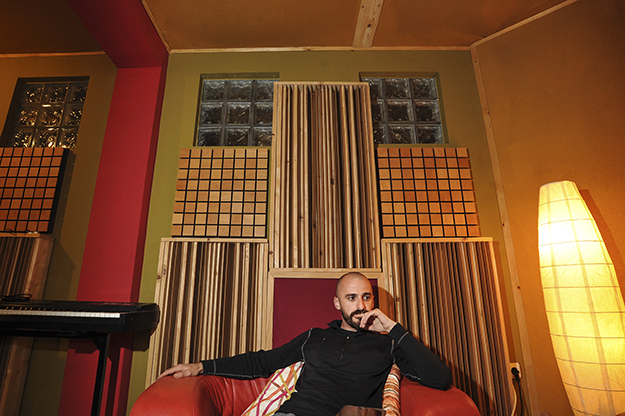 Taste2’s first album that he is preparing now is a collaboration with two jazz musicians from Prishtina: Enes Beu and Armend Xhaferi. He says this album will be funnier and more special than all his other songs, that it will be performed live, and that it will not be limited to hip-hop.

A frequent component of his work is satire. Recently he released the song “Kthemu,” (“Come Back to Me”) in which he speaks about one Kosovar society’s most delicate issues: gender relations. Within it Taste2 satirizes the roles of men and women in a relationship.

He has recently stayed in Prishtina more frequently, as besides working on his album, he is also working with comedic act “Stupcat,” recording a new episode of their famous show “Egjeli.” It seems as though this collaboration will be a continuation of Taste2’s connection to satire.

His irony goes even further and extends to issues of identity that he sees as fundamental to Kosovar society. He is a rapper that is hard to define, saying that he does not know who he is, and that he expects to find out just before he passes away. He sees death as liberation. Usually, he says, others know him better than he knows himself, as they speak about his affairs

K2.0 spoke with Taste2 about protest, laughter and chicken pâté.

Taste2: We have this problem. Identity is a problem that is surfacing here. Maybe that is the essence of the problems of our society. So it is hard to find out who we are, what we are, because things are pretty messy at the moment. It turns out that we still don’t know what we are and whether we are.

Does Taste2 know who he is?

No, of course not. I’m still finding out. Maybe I’ll find out who I am just before I die; it would be a liberation. Or I’ll ask someone “who am I?” and maybe they’ll tell me. If you think about it, it turns out that everyone knows me better than I know myself. Because like in all small places, word gets around, so others know you better. Ultimately, I can say that no, I don’t know who I am.

Pasul [bean stew] and gullash are usually seen as traditional dishes in Kosovo; they are foods that ‘fill your stomach.’ You have written a song for pashtetë [chicken pâté], a fast food that is not as filling as gullash or pasul. What is pashtetë to you in this song?

Pashtetë is the lie we eat up every day, the lie that consumes us. People are full of lies today. Besides pashtetë, the song is also about “Pashtet” [“Without a State”], so it is word play. But I definitely think that to really be full you need to eat gjyveq [a potato- and vegetables-based dish]; it is mixed. I’ve lived in France for a while now with different communities, and that is what I like. There is a mixture of nationalities and races, and it is something I like, it is something important. When people of different communities live among each other, then we can say that success has been achieved.

You said Pashtetë is the lie that we eat up every day. Does this mean that lies are being served to us like fast food, or are they made with a recipe?

We eat up lies every day in whatever form they get to us, no matter how. It seems as though we have no other choice — we are too afraid to follow the path that leads to the truth. This is happening all over the world, not only in Kosovo; in today’s world, lies are the key to success. Or better yet, silence is the key to success. Because in today’s world, if you try to revolt, you don’t achieve anything; you have to live a lie, in order to make progress. 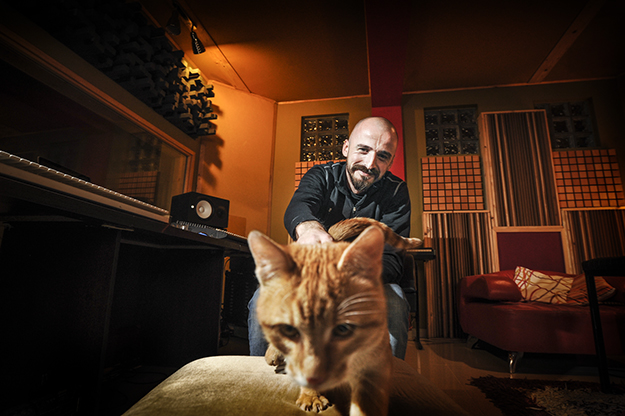 In your song “Pashtet” you say “Full of fat / Spit on my face / You’re obliged to.” Who are we obliged to spit on?

Those who are full of fat.

What does “full of fat” mean?

It’s the people who do bad things, that damage this country. I never wanted to name these people. We are not stupid, we all know who they are and what they’ve done. I do not mention names because I am not a political person; I do not belong to any political party. Although I’ve taken part in protests, it does not mean that I belong to a political party, or that I support a political party. I simply felt it as a duty, as an obligation, so I went out.

So you’ve been out to protest?

Yes, whenever I’ve had the chance.

Did you throw stones?

No. I just whistled and swore.

In the music video of the song “Pashtet” we can also see scenes of violent protests that happened in our country. It’s interesting to see that you show police brutality, but also injured police officers. Did you manage to explain to yourself whose side Taste2 is on, if we can separate them like this?

Taste is for justice.

"If you see a bomb falling, laugh, because there is nothing else left to do."

What is justice to you in this case?

We still don’t know because the situation is too turbulent for us to know what justice is. In protests we can’t say that the police are the bad guys; they are obliged to be there. So we cannot label them all as bad. Naturally there are bad cops, just as there are bad protesters.

“The culprit surfaced, but the system is on his side / So like a swashbuckler he lets the problem roam freely.” Who is the culprit, according to Taste2?

He who leads the country, has everything in the palm of his hand, has support and does many things. They corrupt the place because they know that they have the support and that no-one can punish them. For this reason the problem roams, and there are no problems for the ones that create the problems.

Is there anything that you haven’t satirized?

Maybe there is. I am recording a new album, so we’ll see; although it will be a happier album, satire will still be there. Satire will always be present in my music.

Does Taste2 take anything seriously?

I take everything seriously!

Is that answer satirical?

No, no. I really do take everything seriously. But sometimes I think that all that is left for us is to laugh. If we cannot laugh out loud, then we should at least be happy sometimes in this world, because the situation is not good anywhere. But in order to not dramatize too much, it’s better to laugh; if you see a bomb falling, laugh, because there is nothing else left to do. You have nowhere to run to.

Taste2’s music can also be classified as satire towards the mainstream hip-hop scene in Kosovo. Am I right?

No, I wouldn’t say so. I am friends with many rappers in Kosovo. I know them and they all chose their respective paths. Some rappers were suited to one another. But I went in a completely different musical direction. I tackled social issues, which is something rare in today’s hip-hop scene. Bim Bimma continues to do such a thing. I haven’t seen others do it. I think they are living in an illusion. They have become Americanized, more or less. Like everywhere in the world, this mainstream is leading hip-hop. But I am still old school, and I believe that I should continue like that, despite not knowing where it will take me.

The studio is the place where I feel most at home — when I go there to make a song, and when I finish it, it is like lighting a cigarette after sex.

After the year 2000, rap music started a sort of cultural revolution in the country. But now it seems like a thing of the past. What changed?

Money, seemingly. Money changes things. They [rappers] are saying that it is a kind of musical evolution, but I don’t agree, because hip-hop has lost its colors. I don’t know why this has happened. It seems as though they are inspired by others, and this is losing hip-hop’s colors. Most of them have models and they forget to give something from within themselves, what they know, or what they are. It is a sort of combination, “a bit like him, and a bit like him.” You see this in lyrics and in the way they look.

There were cases when even within our market, ideas were stolen. I’ve come to hate this a lot, so I did not want to stray from my path. I want to continue pursuing it, making music my way. I don’t know where it will take me. The studio is the place where I feel most at home — when I go there to make a song, and when I finish it, it is like lighting a cigarette after sex. My music is also at that level, so if I spoil music for myself as well, what else is left?

Let’s talk more about revolting — what makes you revolt the most?

You said that you can write a song right from the moment you leave the house, because you are revolted. Does this mean that music is a form of protest for Taste2?

It is. Hip-hop was born that way, as a revolt. And this is one of the reasons why I do not agree with today’s mainstream hip-hop idea. There is no protest in it. Art must have a message — we all think that art will save the world.K