The story of Their Theater - Kosovo 2.0
Blogbox | Albania

The story of Their Theater

Kamëz and the They group.

In a town that seems to be cut with scissors from the national road that cuts straight to the capital, where numerous private houses are built as close as possible to the center — in Kamëz — works the activist group They. For seven years now, the group has been engaged in a range of practices: from law to journalism, anthropology, art, literature, and the theater of the oppressed.

In Kamëz, a large periphery, the group has managed to establish its own center. A center that does not exclude the periphery, but unites the excluded “others” around a library for pupils and students, in reading groups with contemporary authors, in a technically improvised cinema, public performances in the town, investigative journalism, judicial activism regarding the law and the state, and most cordially in theatrical performances. All this because of an inexhaustible thirst for the town.

Kamëz gained the status of municipality 24 years ago and currently has about 125,000 inhabitants. Unofficial sources rank it as the fifth largest municipality in Albania. Before the 1990s, Kamëz was characterized by farming and mining work, while after the 1990s it experienced a mass movement of people from all over the country, mainly from mountainous areas and northern villages, and many returning immigrant families.

From the perspective of the capital, Kamëz is its (to-be-excluded) periphery, often stigmatized as populated by “newcomers, illegals and squatters — the uncivilized and uneducated.” The town lacks proper services provided by the local institutions and investment from the central government.

The group They got its name from this confrontation between the “ego” and the inferior, foreign “other,” necessary for the establishment of the self. In the third person, in the plural, They get mentioned, but are not there. The distance between “them” and “us” is necessary to see more clearly and more deeply against the other. They confess to themselves in the third person. 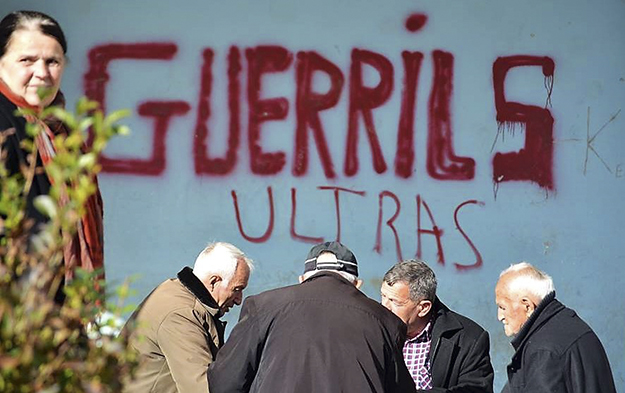 Since the establishment of They, the town’s Palace of Culture has symbolized the necessity to create an autonomous culture, completely independent of the institutions. This comes as a need to critique local structural corruption and demonstrate the power of political organization and creative acts as a form of resistance by citizens who are denied the town and the collective domain.

The palace has four entrances — all of which lead elsewhere and not to the cultural spaces inside it. The first front door does not lead to the cinema, but to the offices of the “Water Supply and Sewerage Services.” From the second door, one does not go to the library but initially enters a private bar that has occupied the public space. The third door is confusing — it is not clear whether it leads to a bank ATM or inside the building. On the stairs outside, stay the town’s unemployed and elderly who wait for a long time on one of the urban buses of Kamëz’s inner line.

The last door almost gives you the impression that it may be the right one: It could have led you to the town theater, but in fact it sends you to a private bank that has taken over 150 m2 of the space. 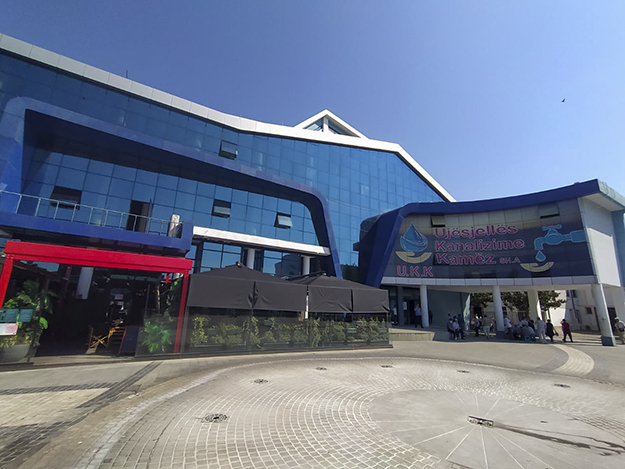 The Palace of Culture in Kamëz, June 2020. Photo: Diana Malaj.

The institutions left barren by the Democratic Party, are considered as “amorphous space,” granted to banks and private businesses by the Socialist Party. Citizens have already formed the belief that the power of the “left” is liquidating cultural spaces, from the demolition of the National Theater in Tirana to the privatization of public spaces in Kamëz. This violent business logic is facing counter-reactions — one of them is Their Theater.

Why ‘Theater’ and how ‘Theirs’?

In the face of the uniform ruling forces, the activity of They is immensely heterogeneous, including the theater as an essential component, because the theater creates a community through self-staging. Unlike festivals, folkloristic celebrations, carnivals, sports and games, that bring the community together in a ritualistic form, the theater tends to go even further, as a space where the community reflects collectively on its origin, structure and future.

Their Theater sometimes protects that which is collective while other times creates it out of nothing.

The duty of the theater is to strain and elaborate social relations on the stage, so the community gathered collectively can examine how much they hold and what implications they may have for the community as a whole. Their Theater follows the method of Augusto Boal — the Brazilian playwright known for his experimental theater where spectators become actors — who says that, “It is not the place of the theater to show the correct path, but only to offer the means by which all possible paths may be examined.”

For years now, They have organized theatrical performances as artistic practices that establish collectives and raise awareness about the importance of civic engagement in problematizing local issues: From the lack of local cultural policies, local government’s “hermeticism,” corruption scandals in urban planning and infrastructure, damage and mismanagement of public property, to environmental destruction. Their Theater sometimes protects that which is collective while other times creates it out of nothing.

The first play “Face of Book,” directed by Ergys Malsia premiered in the Palace of Culture in 2015. The money collected from ticket sales went to equip the libraries of the three gymnasiums in Kamëz.

Later, Their Theater presented the experiences of women workers in the textiles sector, in the play “The Rise Without a Head,” written by the group itself; then, the still present phenomenon of matchmaking through Anton Čehov’s “A Marriage Proposal,” directed by Anila Balla and others; the marital and social relationship through Eugène Ionesco’s “The Bald Soprano”; the vicissitudes of an activist faced with those in power through Dario Fo’s “Accidental Death of an Anarchist”; and most recently the capture of public property and its link with the local government through “Steal a Bit Less,” by playwright Dario Fo and actress Franca Rame. 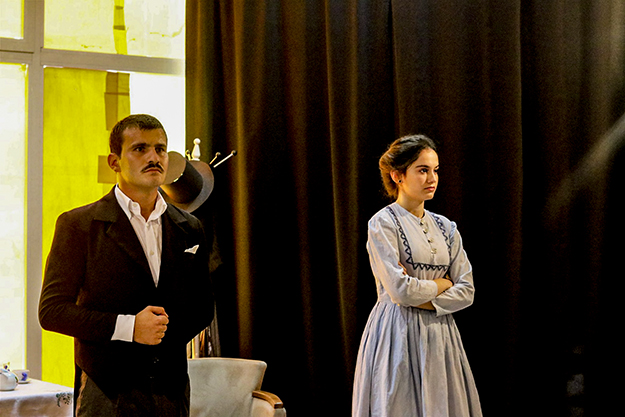 The play “A Marriage Proposal” performed in 2017; the roles were played by Ervis Biba and Xhesika Leka.

Their Theater functions in a town where since the construction of the Palace of Culture in 2011, the Municipality has padlocked the theater space inside the Palace. Their Theater translates scenarios from world masterpieces, adapting and introducing them to the Kamëz reality; it invites students, workers and the unemployed to auditions, establishing a spontaneous community that stages a collective work of art.

Their Theater constructs the stage with rags but with dedication, in unbuilt-upon fields, in houses left unfinished, in unpaved alleys, along polluted rivers and in neighborhood squares. Around the stage of the theater, the community gathers like ants who rarely have the chance to participate as equals and with the same fate in theatrical performances.

In doing so, Their Theatre stages not only the plays but an entire community with the script that seems to be written by them, in dialogue with the greatest theater authors, performed by their sons and daughters — not trained in a theater school — dedicated and willingly drilling on games of the acting spirit.

Theater after the decline

Perhaps precisely because of its great power, as a form of staging plays and marginal human societal experiences, during Enver Hoxha’s dictatorship theater played a crucial role in organizing and configuring a large part of other performing arts. Even for cinema actors, theater served as the academy that trained the cultural “army” of the regime’s image. That is to say, the power of the theater was much needed by a society that tragi-comically tried to stage the Stalinist principle of building socialism in a single place — the self-sufficiency of a community.

Having said this, we can conclude that theater can only be ruined in a society that is already in decline. Even those who wanted to keep the National Theater erected — the They group gave two performances during the time the National Theater was reclaimed by artists and citizens — resembled those who want to preserve the ruins of an already extinct society, as a sign that once there was such a society in these lands.

However, a much more dynamic question than realizing melancholically the loss of a society that seems to have never belonged to us, is what can theater do in a country where “there is no such thing as society and theater,” similar to the infamous formula proclaimed 40 years ago by British Prime Minister Margaret Thatcher.

By dramatizing social problems, Their Theater manages to make the people of Kamëz feel like a community that needs to think and decide together on common problems. It shovels the indifference brought about by the isolating life in the private sphere. In a town where the only mirrors are the windows of cars and buses rushing toward Tirana, Their Theater gives Kamëz’s community a more stable and yet more dynamic mirror, where they can see themselves for the first time without having to spit on it while struggling with their problems and resolutions. 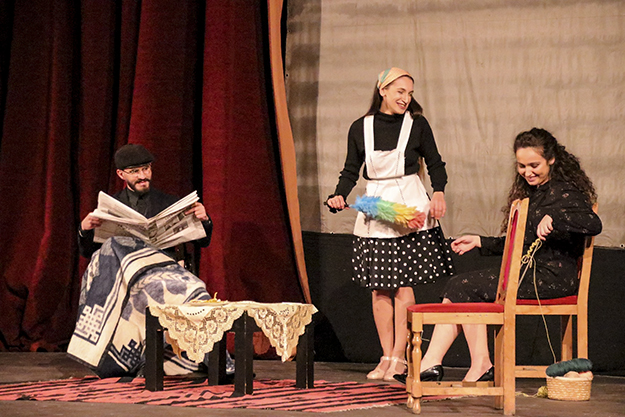 The play “The Bald Soprano” in the National Theater in Tirana; the roles were played by Ervis Biba, Irena Keçi, Desara Hyseni. Photo: Aurora Leka.

Faced with the hostility of local institutions that hold the Palace of Culture hostage, the theater surpassed the law. Streets, neighborhood squares, half-abandoned houses, hidden alleys, and the peripheral corners of the people who never had the chance to see a theater — where theater never embarked — became the scenes of Their Theater.

In August this year, in the main square of the Valias area in Kamëz, the group erected the first stage and premiered the play “Steal a Bit Less.” Dario Fo was adopted to seem as if he was born in Valias, where a fascist mine was located — a former socialist mine worker, retired in Valias, on the verge of being evicted and having his house demolished.

The performance of the comedy — that deals with the seizing of the cemetery land from an investor and the cemetery manager who uses corruption and his apology about it to run for mayor — came after ethnographic and organizational fieldwork during which the group learned about the local history of the zone and got in touch with its residents.

However, the play was violently interrupted by some residents who could neither tolerate its continuation nor leave indifferently, but wanted — or were forced — to intrude on it stubbornly and violently. Even after this violent incident, the show was staged five more times. 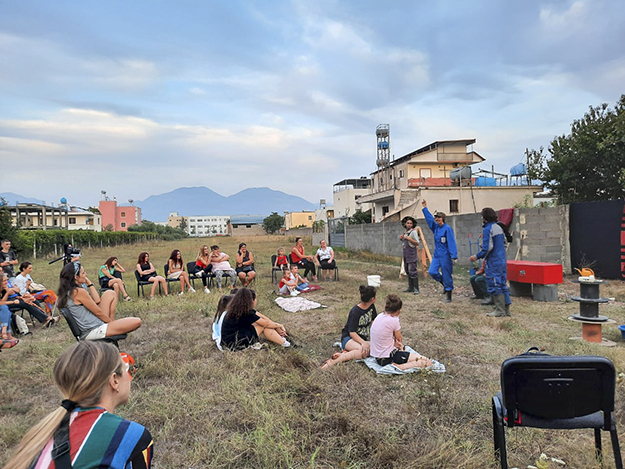 They go to “the others” whom they resemble: in Valias, Bathore, Frutikultura neighborhoods, downtown, then in Tirana, in Lexha. The performance of the actors — Anisa, Emiliano, Irena, Klodjan, Mira, Marinela, Marius, Ronald and Redi — directed masterfully by Anila Balla, gathered more than 600 spectators in six different places, aiming to transform them into spect-actors — as Augusto Boal suggests in his theory of the Theater of the Oppressed — of our public and collective life.

The They group, with its activity, proves that the theater and civic activism go hand in hand. Theater is the best practice for democracy because it puts you in someone else’s shoes. There is no democracy without recognizing the other as your equal because without equality and the relationship with the other, democracy is chaos. Those who cannot stand the theater, are not ready for democracy.

Their Theater makes Kamëz more of a town, and as a reward for its re-creation, the theater keeps us together by confronting us with each other.