The struggle for a normal working week: Updates from Kosovo’s private sector

A few weeks before the outbreak of the COVID-19 pandemic, a public discussion emerged on whether Sunday should be legally off for workers in the private sector in Kosovo. At that time, I thought it was important to contribute to this discussion from a labor economic perspective.

However, with the situation changing so fast as the pandemic unfolds, it’s important to note that this writing may be relevant only in the long run, after recovering from the unprecedented economic crisis we are about to face.

Having said that, the issue of having Sunday off is nothing but an inquiry on the quest to determine what a normal working week should be. Undoubtedly, the answer won’t be able to evade the arena where the antagonistic interests of the capitalist and the worker lie.

At different times in history, “normal” has been defined differently. But it essentially boiled down to finding the optimal point by moving away from reducing workers to mere labor-power and towards enabling them a dignified life through a well-balanced time between work and leisure.

While it first may seem as a clear-cut discussion in which your stance depends on the side you lean towards, it is a bit more complex than that. What makes it so is the friction of antagonistic interests that takes place in a context where unemployment is the highest in Europe, trade unions are weak and run by incompetent leadership, and the government’s capacities for monitoring and regulating the labor market have been insufficient.

Despite these obstacles, the struggle is far from being doomed to fail. The key is to learn from the paths paved by other countries. History shows that to begin with, workers must organize, and employers should adjust after reconsidering what actually helps — or hurts — output.

How long are working hours currently?

A short discussion with any randomly selected worker in the private sector is very likely to reveal that they work long hours; often without a working contract, health insurance, pension contributions, or paid holidays. While all these issues are interrelated and deserve great scrutiny, the focus here is mainly on the working hours. So, how severe is the situation? 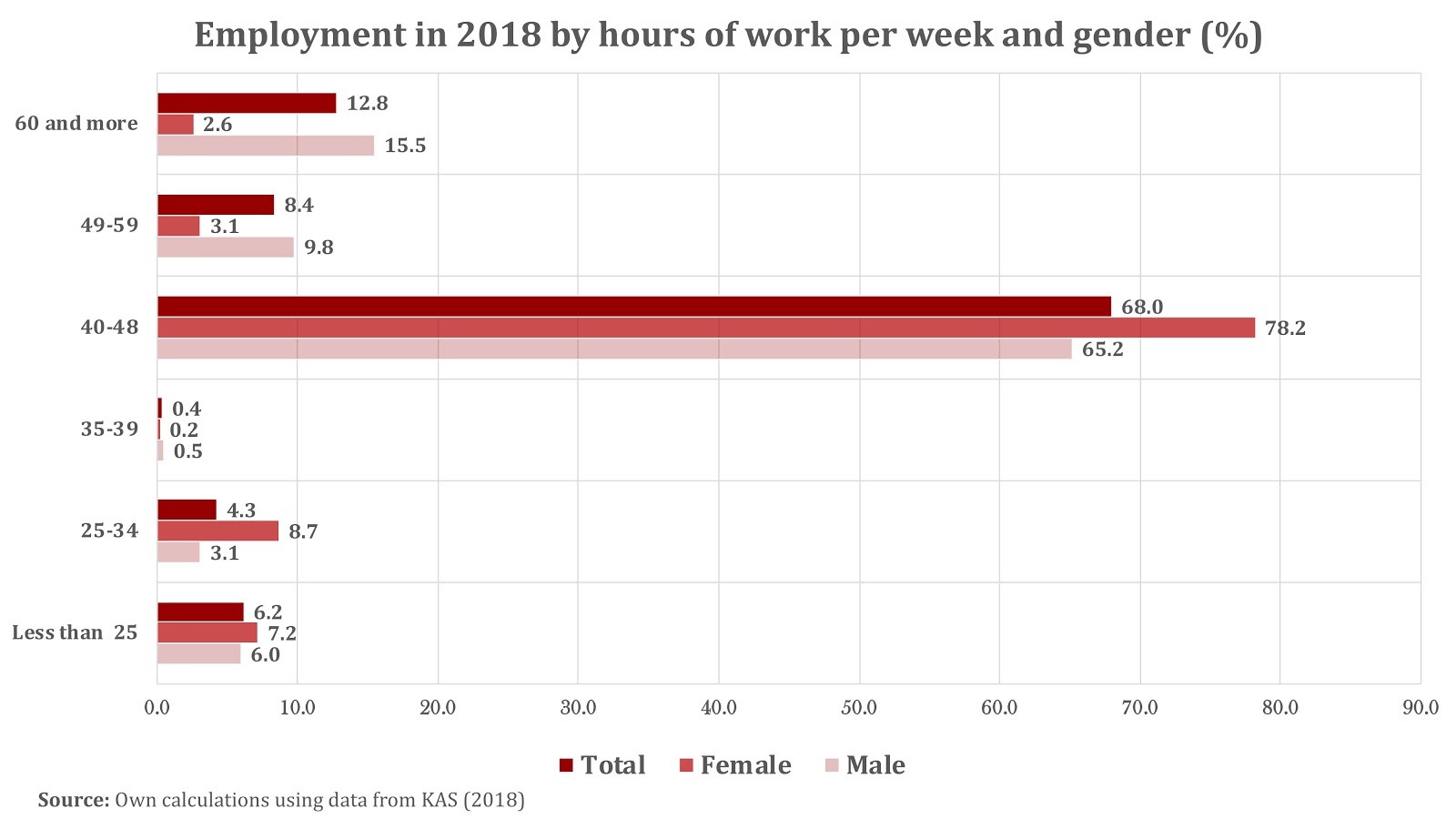 The private sector is a whole different animal — the weekly average hours of work were 48 (49 for men and 44 for women). Due to such stark differences between working hours in the two sectors, it is safe to assume that a great percentage of those working 40+ hours a week are in the private sector.

How long do workers in the region work?

Having seen the length of working weeks in the private and public sector in Kosovo, let’s compare with the region. Even though a direct comparison is not possible since KAS does not provide an overall average of weekly working hours for both sectors, in the graph below we can see a comparison among six Western Balkans countries where Kosovo’s statistics for the two sectors are used separately. 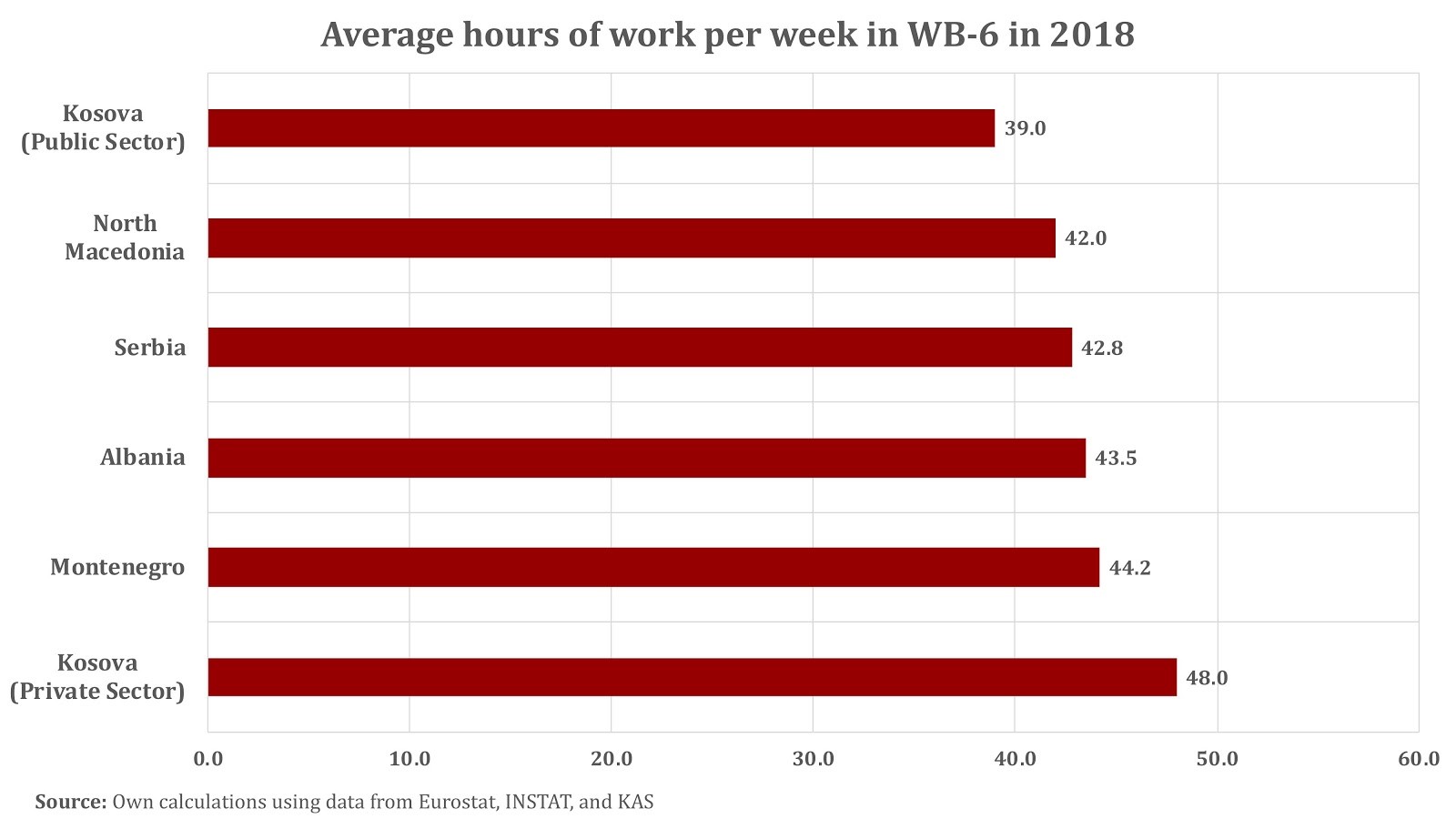 Zooming the comparison further out, we see that the situation of Kosovo’s workers in the private sector does not look better when compared to workers in the EU member states either. The graph below shows the average hours of work per week in 2018 for EU-28 countries, with the United Kingdom included. 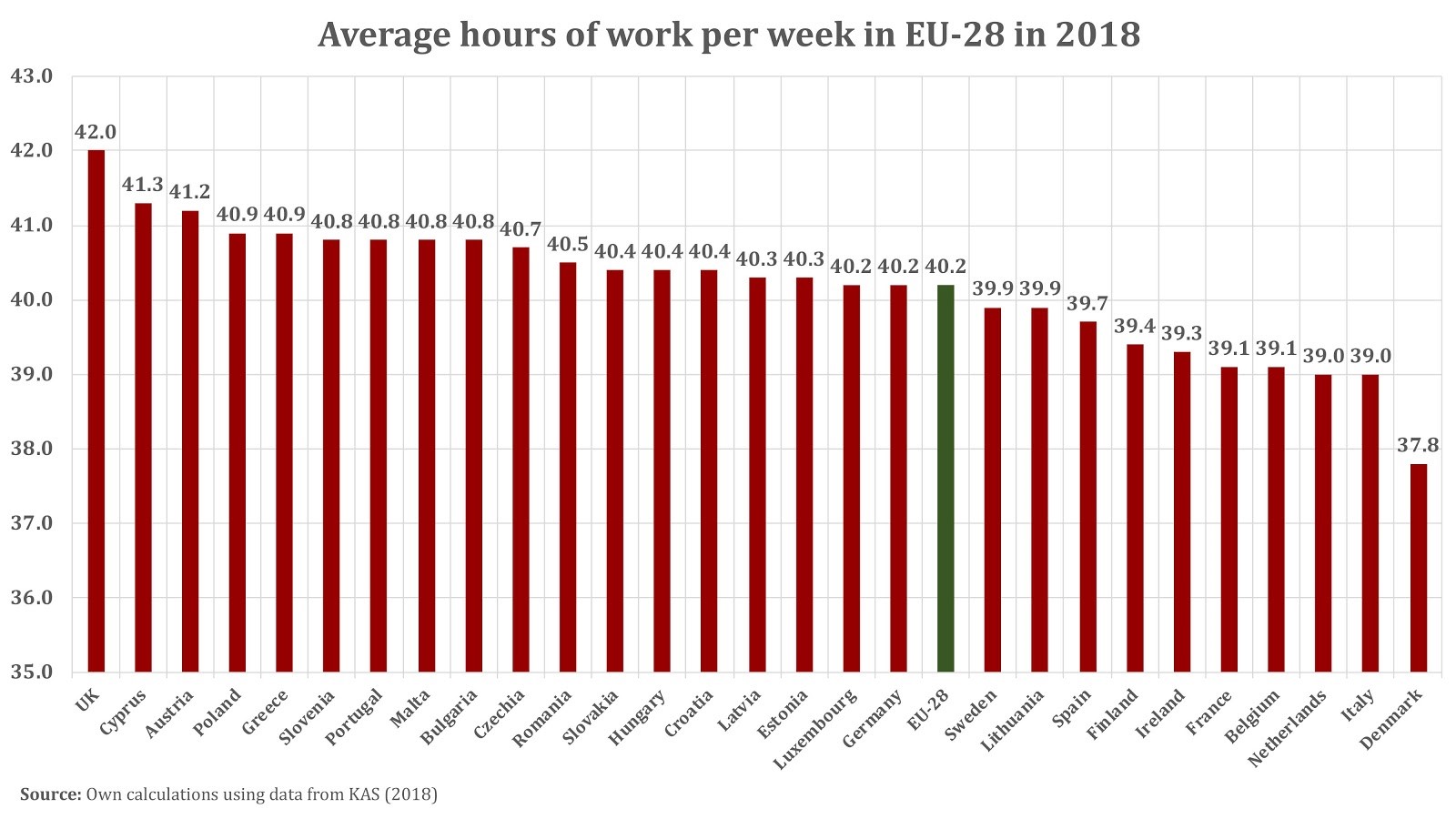 It’s important to note again that these are not direct comparisons, in view of the fact that the averages for other countries display both the public and private sector in one place. Regardless, they serve as proxies that provide an approximate comparison of the length of the working week in the region.

That said, the issue is not simply that workers in the private sector are working much longer hours than those in the public sector in Kosovo, and longer than workers in WB-6 and EU-28 countries, because the Law on Labor permits it in certain circumstances. The issue is that more often than not workers are not compensated for working long hours — whether it’s because they lack work contracts or, even when they do, those contracts are not adhered to by employers.

What works against a normal working week?

The first factor that works against a 40-hour working week in Kosovo is unemployment.

For various reasons, including a mismatch between the education system and the economy, the labor supply exceeds the labor demand — as a result Kosovo continues to have the highest rates of unemployment in Europe. In such a highly competitive market, those who work feel threatened by how easily they can be replaced, and any attempt on their part to demand better working conditions is faced by the evident threat that employers can fire them at will.

What allows for this ease of replaceability to be pervasive is the share of employment by the private sector and the general perception of the skill sets needed. In 2018, the top four sectors employing people were the wholesale and retail trade sector with 17%, the construction sector with 11.9%, the education sector with 10.3% and manufacturing with 10.3%.

There are virtually no effective trade unions in the private sector.

Apart from the education sector, the other three are overwhelmingly private. Moreover, the skills required — especially for construction, wholesale and retail trade — are often perceived as easy to learn, so a considerable number of workers in these industries are reasonably afraid of being replaced.

Another factor that works against a normal working week in our liberal labor market is the state of trade unions. While officially there is an Independent Union of the Private Sector, there are virtually no effective trade unions in the private sector. With no trade union to protect them, workers remain an easy target for throwing firing threats at, and even for carrying out those threats.

The void formed by the lack of trade unions is far from being filled by state institutions.

Kosovo has a Work Inspectorate, which is mandated to monitor the enforcement of the Law on Labor. However, this inspectorate’s capacities leave much room for improvement; in 2018, there were 42 work inspectors overseeing more than 85,000 businesses. This is a ridiculously small number to simply visit all those businesses, let alone to conduct thorough inspections and analyses of their working conditions .

In short, private sector workers who demand shorter working hours are faced by threats of being replaced, which become serious due to the reserve army of unemployed. Those workers do not have trade unions to support their case, nor do they have state institutions that guarantee law enforcement — which is not enough in itself after all.

What works for a normal working week?

Although forces working against normal working hours may seem unbeatable, they are not. To understand why, we should dig deeper into the history of the struggle and rely on data.

In the early days of the Industrial Revolution in the 1800s, it was common for English workers to work in draconian mills for 14-16 hours per day — more often than not in miserable conditions. Similarly, when the U.S. government started tracking working hours in the late 1800s, it found that the average working week was 100 hours. This was a considerable rise from pre-industrial times, when people worked an average of 12 hours a day for an average of 120 days a year.

Shortening working hours has rarely happened out of the benevolence of the employer — it’s almost always had to be demanded. The demand for it was born with the inception of trade unions, as one of their early calls for improving working conditions.

So, the first step in favor of a normal working week is the organization of workers in trade unions. Although Kosovo’s current labor law needs several revisions, workers should exhaust their rights guaranteed by it — one of those rights is to come together in unions. While they should demand the government’s support in cases where employers obstruct unionization, the backbone of the organization should be built from the bottom.

Second, employers in Kosovo should realize that, for output, productivity matters more than the length of work. Their counterparts elsewhere in the world have started to learn that lesson almost a century ago. Henry Ford realized it in 1926, when he adopted the 40-hour working week in his automotive factories.

A shrinking labor force will reduce the labor supply, so businesses should start to seriously think about changing their attitude.

The counterargument here could be that Kosovo is not a developed country and cannot be compared with such countries. While that may be true, it doesn’t mean that we shouldn’t learn from them, especially if we want to move from being “developing” to being “developed”. In that case, learning from best practices is imperative, all the while bearing in mind necessary adaptations and adjustments because one-size-fits-all formulas rarely work.

Lastly, a trend that is worrisome in many aspects, but which could push employers in Kosovo to improve working conditions, is emigration.

With ever more people wanting to migrate to developed countries, employers will face great difficulties in finding workers unless they provide a normal working week, among other much needed improvements of working conditions. So, a shrinking labor force will reduce the labor supply and businesses should start to seriously think about changing their attitude in this regard.

The prospects of actualizing a normal working week

The demand of private sector workers to officially recognize Sunday as a day off is a demand in the struggle for a normal working week. They already work much longer hours than workers in the public sector and others in the region. Their voices are being heard by some municipality assemblies which have already voted in favor of having Sunday off, while others are still considering it.

Despite high unemployment, weak or nonexistent trade unions, and insufficient government capacities to monitor working conditions — all of them forces working against a normal working week — there are still paths that show how it can be achieved.

Workers realizing that their rights come from bottom-up organization rather than top-down benevolence is imperative to push forward. Employers realizing the inverse trends between working hours and labor productivity, the fact that productivity is key for output, and that emigration can jeopardize their business, are all factors that should motivate them to step back from obstructing the workers’ demands for rights and adjust their actions accordingly.

Indeed, such historical dynamics have changed working conditions in currently developed countries, and they can be propelled here, too.