‘The truth has become costly’

‘On August 21, 1998, our colleagues, journalists Đuro Slavuj and Ranko Perenić, were abducted here. We are looking for them.’ This is the inscription, in both Serbian and Albanian, on a memorial plaque by a roadside near Rahovec.

On August 21, the two journalists started their journey from Rahovec to the Zočište Monastery to talk with the monks, who had recently been released by members of the Kosovo Liberation Army (KLA). They went for a story, but they never finished it — the story disappeared along with them.

The memorial plaque has been repeatedly laid by Kosovo Serb journalists who have been searching for their missing colleagues for 20 years. The Kosovo branch of the Association of Serbian Journalists has fixed this imprint for the two missing journalists six times, but it has been torn down on each occasion. The competent institutions have failed to find out who has a problem with the reminder of the missing journalists. 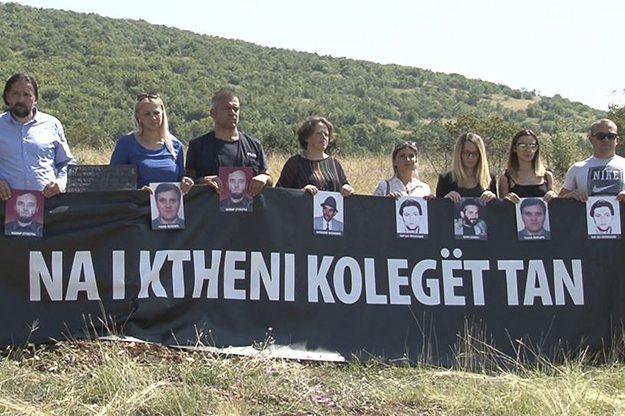 Journalists associations have called for more to be done to investigate the cases of 15 journalists who were killed or disappeared between 1998 and 2005. Photo courtesy of Association of Serbian Journalists.

Slavuj and Perenić are two of 15 journalists — both Serbs and Albanians — who were killed or kidnapped in Kosovo in the period between 1998 and 2005. None of these cases have been resolved, and associations of journalists working in Kosovo still have no answers to their questions about what happened to their colleagues.

“It sends a bad message that attacks on journalists are in some way acceptable,” says Budimir Ničić, president of the Kosovo branch of the Association of Serbian Journalists.

“Our association has been insisting on solving these cases for years, but those who are in charge and that should give us answers to questions of where our colleagues are and who is responsible for their abductions and murders do not act or have not done their jobs properly. First of all I refer to UNMIK and EULEX and now also to the domestic institutions.”

“We have colleagues who were killed and we did not get those responsible for these wrongdoings. This is a sufficient reason to be concerned today about these things, because they can happen again if there are no judicial follow ups,” says Maja Fićović, editor-in-chief of Radio Kosovska Mitrovica.

Although two decades have passed since the conflict in Kosovo, security is still one of the biggest problems for journalists. In Kosovo, there are between 20 and 30 attacks on journalists reported per year, with the majority remaining unresolved. If an attacker is discovered and a trial process opened, the outcome tends to be a relatively minor fine or probation sentences.

The status of journalists is not legally regulated, since Kosovo’s legal framework does not distinguish between an attack on a regular citizen and an attack on a journalist who is doing a job of public importance.

“The truth has become costly, and less and less colleagues want to expose themselves to the risk by doing a job — that is not even paid adequately — out of love and enthusiasm,” Fićović says. 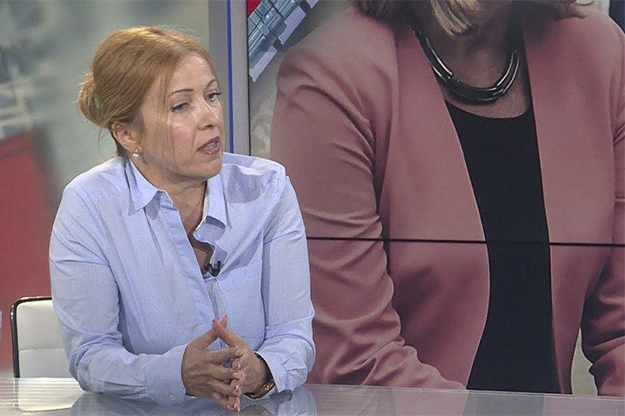 Tatjana Lazarević, an editor at KoSSev, says that her media comes under constant pressure, from direct threats and physical attacks on their property to more subtle means. Photo courtesy of N1.

One of the unresolved attacks on the media is the July 2015 shooting incident at the KoSSev portal in North Mitrovica. Although more than three years have elapsed since multiple shots were fired at the walls and windows of KoSSev’s premises, the perpetrators of this act have yet to be found. KoSSev journalists have attempted to find out the truth about this case, but to date have remained unsuccessful.

And this is not the only case of an attack on KoSSev’s editorial office in recent years. Tatjana Lazarević, an editor at KoSSev, lists some of the pressures they have faced: “Setting a car on fire, threats to my family, administrative pressures through institutions, including lawsuits, attempts at social stigmatization and excommunication through pressure on readers, verbal attacks, omission of our media from events and distribution lists, false accusations and [politicians] making statements describing us as ‘state enemies’…”

Many of the problems that journalists face in Kosovo are common regardless of the language in which they do their job. In many instances, journalists work without contracts, and there are cases in which employers do not pay people for their work. All the while, the courts dealing with these cases are extremely slow in settling disputes.

But one of the biggest problems facing media reporting in the Serbian language in particular, is uncertain funding.

“Most journalists work for minimum wages, and many are not paid pension contributions but are part of the black economy,” Ničić says. 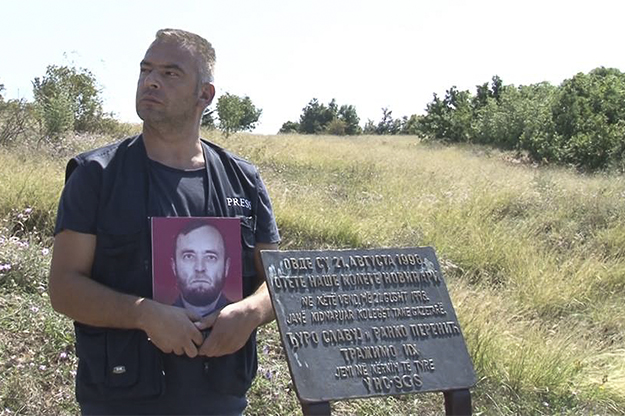 Budimir Ničić, head of the Kosovo branch of the Association of Serbian Journalists, says that Serb language media in Kosovo are in constant financial peril and that their future appears bleak. Photo courtesy of Slobodno srpski.

He emphasizes that apart from RTK2, the TV channel that is financed from the Kosovo budget, and four electronic media plus the Jedinstvo newspaper that are financed from Serbia’s budget, most Serb-language media rely on project financing. “These are mainly small projects lasting from three to six months, at best for up to a year, and these people are constantly under pressure as to whether they will get a project to continue their work and if they will be able to survive,” Ničić says, adding that journalists often do not know if they’ll be paid the following month. “I’m really concerned about the future of Serb media in Kosovo.”

Other sources of income are almost non-existent. Marketing mainly relies on occasional campaigns by international or non-governmental organizations, while due to the poor economic situation in Serb majority areas, companies rarely advertise and Albanian-owned companies show little interest in advertising in Serbian language media.

“Only a very small number of young people want to work in the area of journalism, and it seems to me that journalism is one of the least promising occupations,” Fićović says. She points out that donors increasingly recognize themselves more as partners of NGOs rather than media organizations.

Media in the Serbian language generally have small offices of several people who are forced to perform multiple roles simultaneously; this applies to journalists as well as to cameramen and editors.

“Our cameramen are at the same time video editors and sound and light specialists; put simply, they are three in one,” says Ničić, who in addition to his role at the Association of Serbian Journalists, also hosts the talk show Slobodno Srpski and is a correspondent for Voice of America in the Serbian language. “What has made our work more difficult in the last several years has been that our interviewees are inaccessible simply because many officials and representatives, primarily from the Serb community, do not want to appear on our media, so we can not even take the most simple statement.”

Fićović agrees, adding that due to the situation in journalism, the media and the journalists themselves have a bad reputation in society. “A certain number of journalists themselves are to blame for this, those who have infiltrated into local and central authorities, showing that their personal interests are above the public interest,” she says, referring to journalists who she says are serving specific political agendas.

She believes that financial dependance is also problematic, as it risks affecting the editorial policies of some media. “I think the profession has never been at a lower level,” Fićović says. “What’s good is that there is no hate speech in the media anymore, that there is more interethnic tolerance, and in that sense, things are heading in the right direction. Cooperation among Serb and Albanian colleagues is really at an enviable level.”

Due to such uncertain financing, and the consequentially small number of people in editorial offices, Serbian language media in Kosovo are sometimes forced to give up quality or interesting topics in order to keep pace with reporting on current events. Ničić says that journalism is largely based on the transmission of information from other media or agencies, or even just the announcements of certain political parties, while basic research into topics of public interest is absent.

“It turns out that these small local independent media often trigger the most serious issues in this society,” says Ničić, adding that due to a lack of capacity they are very often unable to see their stories through to the end or to follow up on interesting articles. “Serb media covering more than one topic at the same time do not have the luxury of assigning one journalist for a single topic,” Ničić says.

“Presenting themselves as international organizations that aim to protect freedom of speech and the rights of journalists is nothing other than lighting a scented candle in a house that is blown away by a hurricane.”

The K2.0 interviewees all consider that there is not enough understanding in society for the journalistic profession, and that this lack of understanding is particularly derived from political circles, through which the media are often seen as enemies to institutions simply because they question their responsibility and attempt to hold them to account.

“These people act as if an institution is their personal property,” Ničić says. “They should understand that they are temporary, but that we journalists will remain after them to do our job.”

Fićović agrees, saying that “we live in a corrupt system” where journalists do not trust anyone. “Institutions should take journalism seriously, and consider the journalistic profession and journalists as ‘people who are just doing their jobs,’” she says.

Despite the numerous problems faced by journalists every day, they do not feel that anyone is protecting them, neither local nor international institutions or organizations.

“Presenting themselves as international organizations that aim to protect freedom of speech and the rights of journalists is nothing other than lighting a scented candle in a house that is blown away by a hurricane,” KoSSev’s Lazarević says.K

This article was supported by the OSCE Mission in Kosovo. The opinions and sentiments expressed are those of  Kosovo 2.0 and do not necessarily reflect those of the OSCE.