The walls as a canvas

From slogans, to tagging, to street art, the world of graffiti is ever-evolving.

For centuries, city walls have been used to carry messages. One of the earliest examples dates back to Ancient Greek times, and can be found in the modern Turkish city of Ephesus, while the preserved Roman city of Pompeii is covered in scrawled inscriptions, from crude insults to declarations of love to political criticism.

It is this final category, political statements, that can mostly be found in Prishtina. Messages drawn mostly in black: cries against injustice, accusations of corruption, and fears over the future — “I vote, you vote, he/she votes. We vote, you vote, they profit,” “Are you offended by unemployment?,” a sign of radioactivity followed by the words “Radioactive Zone.”

Recently, a silhouette of Astrit Dehari has appeared in cities all over Kosovo, calling for justice for the activist who died in mysterious circumstances in a Prizren jail. He joins the figure of Ukshin Hoti, who went missing during the Kosovo war, with many pieces of graffiti asking for his whereabouts.

The messages often make cultural references, with Kosovar politicians depicted as figures from Hollywood films, president of the Assembly, Kadri Veseli, as Tony Montana from Scarface, or Veseli alongside President Hashim Thaci and former Prime Minister Isa Mustafa as the “Inglourious Basterds.” Other cultural references are more existential, a quote from the film “Leon” is sprayed onto one wall in Prishtina: “Is life always this hard, or only when you’re a kid?”

Political messages have been appearing on the walls of Prishtina since way back in the ‘90s, when “Kosovo Republic!” or “Freedom, Independence, Democracy,” were common choices. These graffiti have long since disappeared from the walls and dark corners, yet they still exist in the drawer of one man, who unbeknownst to almost everyone, dedicated and quiet, was keeping a tab on the art for “which no one cares, no one gives importance.” 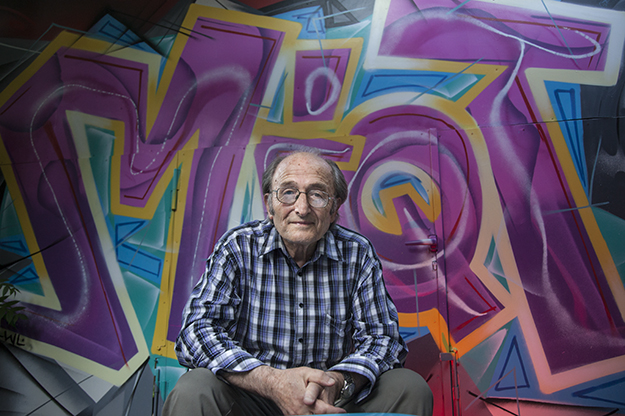 His name is Skender Boshnjaku, who has 40 years of experience in a profession that has perhaps started to rub off on him, neuropsychiatry. He found his affinity for graffiti when he first saw some pieces in Paris on the walls around the river Seine. Since then he has been creating a collection of graffiti wherever he went, but the majority of his 3,000 pictures are from Prishtina.

Over the years, Boshnjaku says that there has been a change in the manner in which graffiti are made, the places chosen, and the messages given. “In the ‘90s, they were faster, more anxious, and in hidden spaces, where darkness dominated,” Boshnjaku tells K2.0. “They were like the drawings of children — spontaneous, quick, but still able to express a message in a very short time.”

There was a good reason for speeding up during the nineties. The Serbian police was far from indifferent to such feats, and their method of appreciation was usually by gifting graffiti artists with kicks, beatings, and arrest. Boshnjaku holds the brave spray painters of the ‘90s in high regard. “They have left an inerasable mark, each one a history on its own, eternized by photography,” says Boshnjaku.

Boshnjaku collected them all, from simple statements of fact ‘No Water, No Electricity, No Problems,’ to dedications to NATO. Even a piece outside Xhevdet Doda high school’s former location, an all blue message advising the reader to “F**k off,” which he says was a cry of accumulated rancor and resentment. 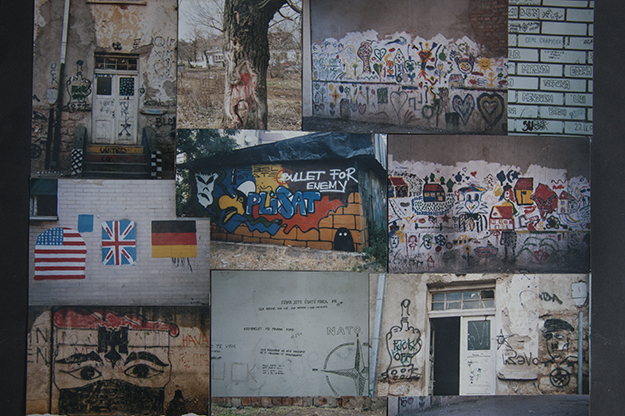 Boshnjaku’s collection features everything from political statements to artistic doodling.

But it’s not just political statements in Boshnjaku’s collection, which also includes a number of ‘tags.’ Tagging developed in New York in the late ‘60s and early ‘70s when graffiti artists began to leave a signature, often a single word, sometimes even their own name.

Competition emerged between artists, and tags grew more colorful and elaborate. When Hip-Hop culture emerged in the same city in the late ‘70s and early ‘80s, graffiti was labelled as one of the four key elements, alongside rapping, DJ-ing and breakdancing. Soon, the city was awash with tags.

The culture of tagging spread quickly, including to Prishtina. Taulant Qerkezi, known by his nickname, Taki, first began tagging the city in 2001, first alone, before joining Urban Gorillaz, a team of youngsters, with an “oath to decorate the walls of Prishtina with their creations.” Taki describes the scene at that time as small, but committed to the art.

After finishing a degree in Graphic Design, which incorporated elements of typography and calligraphy, Taki’s work advanced into more complex graffiti and murals. One of his favourite pieces was an exterior mural at the National Gallery of Arts, which was painted over this year.

“It was a mural on which three of us worked, an artist from the group London Police, Zeds, a graffiti artist who is one of the graffiti pioneers in Netherlands, and I participated with the writing above,” he says. 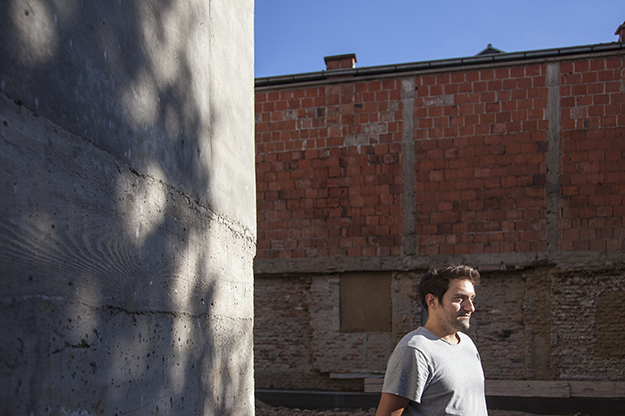 Taki’s two favorite pieces have both been painted over, but he still feels that working outside of the system is the true essence of graffiti. Photo: Majlinda Hoxha / K2.0.

Another favorite was a piece created at the basketball courts in Germia that explored the concept of deja vu, which had been affecting Taki a lot. “I worked on it with a lot of pleasure, and it took me quite some time,” he explains. “For a really long time no one touched it, they just left it, but in time the colors started to fade.” Eventually it was painted over in early 2017.

Taki’s evolution as an artist mirrors the growth of graffiti itself. Many credit UK artist Banksy with transforming graffiti from an underground subculture to a more recognised art form. Banksy’s work appears across the globe and is often exhibited in galleries, while his work on city walls has been protected with bulletproof glass.

While most countries still outlaw graffiti and impose heavy fines, lots of cities have now embraced the subculture, allowing areas of the city to be given over to “street art.” This acceptance of graffiti culture by the mainstream has been criticised by some graffiti artists for bringing it to a middle class audience attempting to gain some underground cool.

Taki prefers to stay temporary and outside of the protection of the law, accepting that being vandalized or painted over is part of the process.

“Preserving work is not important,” he explains. “What is important is that adrenaline, that moment when you are doing it, when you are completely in another state of mind, like when doing extreme sports where you can fall and hurt yourself really bad, but still you enjoy doing it.”

Other sections of Kosovar society though have embraced graffiti’s new mainstream form. A nonprofit organization, Qart Art Development Center, formed in 2014, has taken upon itself to address the ‘problem’ of public spaces. The organization has created two festivals of street art, the Guerilla Art Festival and Meeting of Styles, which has transformed the walls on the side of Rruga B in Prishtina.

Meeting of Styles is an international network of graffiti artists, covering over 16 countries, including Kosovo. Their meetings often take place in conflict with the authorities, though in Prishtina it received with the Municipality’s blessing, with Mayor Shpend Ahmeti even picking up a spray can. 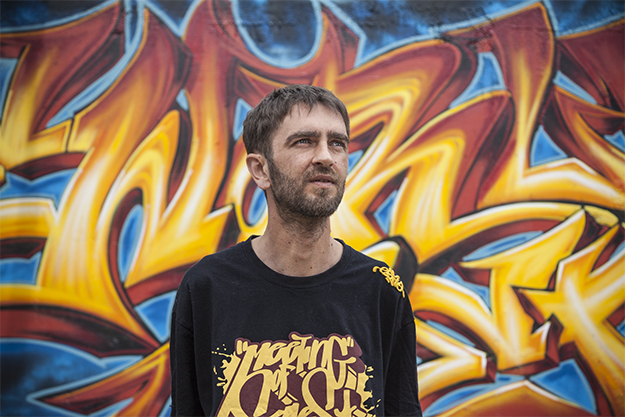 Qart aims to do all of their works in cooperation with the establishment, hoping to decorate Prishtina, a city of grey concrete. It’s director, Agon Xhelili has stated that the organization’s aim is “to improve the socioeconomic life of citizens, through interventions in public spaces”, with the main focus on street art.

Seeking permission for creating graffiti legally in Prishtina can be quite difficult. If you want to paint on a building that belongs to one of the Ministries, you have to ask them; if you want to decorate a shared building, then you have to collect the signatures of the majority of residents; for municipal walls and streets, you have to ask the Municipality of Prishtina, and so on. Despite these bureaucratic difficulties Xhelili will not stop, as he believes that the art represents an improvement for the good of all citizens.

During Guerilla Art Festival in 2016, Qart managed to bring some very well known street artists, including Matthew May, who currently holds the world record for the longest 3d work, and Italian graffiti artist Manuel Di Rita, known as Peeta, who created the mural painted on the Ministry for Economic Development’s building. 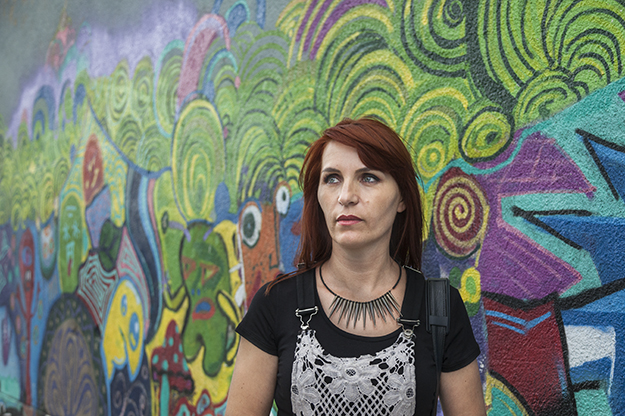 In Ferizaj, Lebibe Topalli has helped spearhead a street art movement that has transformed the cityscape. Photo: Majlinda Hoxha / K2.0.

While street art may seem like a modern phenomenon, another city in Kosovo would beg to differ. Ferizaj has recently declared itself “the City of Murals” and its first piece of street art, “The Waiter” was created in 1967.

In 2014, Ferizaj resident and painter Lebibe Topalli was inspired by the mural to continue the decoration of city, and with five other artists set out to create another huge mural. After still being in possession of surplus paints after completion, another artwork was initiated. Slowly the idea for a “mural festival” was born.

Two editions have now been held. The first with the theme of freedom of movement involved around 40 artists gathering to create three murals. The next had an environmental theme, and saw “A Ballerina Dancing in Space” join “The Waiter.” Other murals depicting a world ice cream melting and a town under the desert, made the walls of Ferizaj a sight to behold.

Slowly, by creating four to five murals a year, Topalli believes that the city will truly own the name as ‘The City of Murals,’ and adds that other than promoting the city, the festival also enlightens the public about that form of artistic expression.

With more and more festivals dedicated to different elements of graffiti culture in Kosovo, including Guerilla Art Festival happening right now in Prishtina, the opportunity to use the walls as a canvas has never been wider. If nothing else it will help add to Skender Boshnjaku’s collection, whose years of documenting graffiti have led him to one conclusion, that “only the young are bent on freedom, on breaking limitations, and only the young want to change the world.”