Lina left her home on the morning of August 25, days after the Taliban took power in Kabul. For more than 24 hours she stayed at the Kabul airport amid commotion, fearing for herself, her baby and her husband.

“It was a real chaos, every person wanted to leave Afghanistan, everything was happening very fast and in disarray,” she said. “Everyone wanted to escape from that hell, even those who did not have the proper documentation and visas, because if they did not succeed, they would remain there forever.”

Now in Albania, the 24-year-old, who identified herself as Lina and did not give a last name, was holding a 9-week-old baby in her arms. She used to work in Kabul for Women for Women International, an international organization for the protection of women.

“I built everything there, my life, my job, my family and my future, but it all collapsed within a few hours,” she says as her eyes fill with tears.

Although she arrived on the first plane that landed in Albania, her family was left behind in the Taliban-occupied city. Lina is afraid for their safety.

On August 15, the Taliban claimed victory after taking control of the Afghan capital, Kabul. Just two weeks before the U.S. finished withdrawing its troops, as announced by President Joe Biden, the Taliban regained control of Afghanistan’s largest cities, crowning their return with the fall of Kabul.

The Taliban — an Islamic politico-religious movement and military organization — ruled Afghanistan during the 1990s until U.S. troops entered the country in 2001 and toppled the Taliban government that was providing sanctuary for al-Qaeda, the terrorist group responsible for the attacks on September 11, 2001.

The return of Taliban control to Afghanistan sparked a new wave of refugees. Within hours, Kabul’s airport was filled with Afghans intending to flee their country. Many fear retaliation from the Taliban for past cooperation with the United States, international organizations, or the already collapsed Afghan government. In addition, Afghans fear that in these circumstances Islamic law may be reinstated. During their previous rule, the Taliban imposed their harsh interpretation of Islamic law. This prevented women and girls from going to school or work, forced them to wear burqas and go out of the house only under the supervision of a man; thieves were punished by amputation, among other types of punishment. 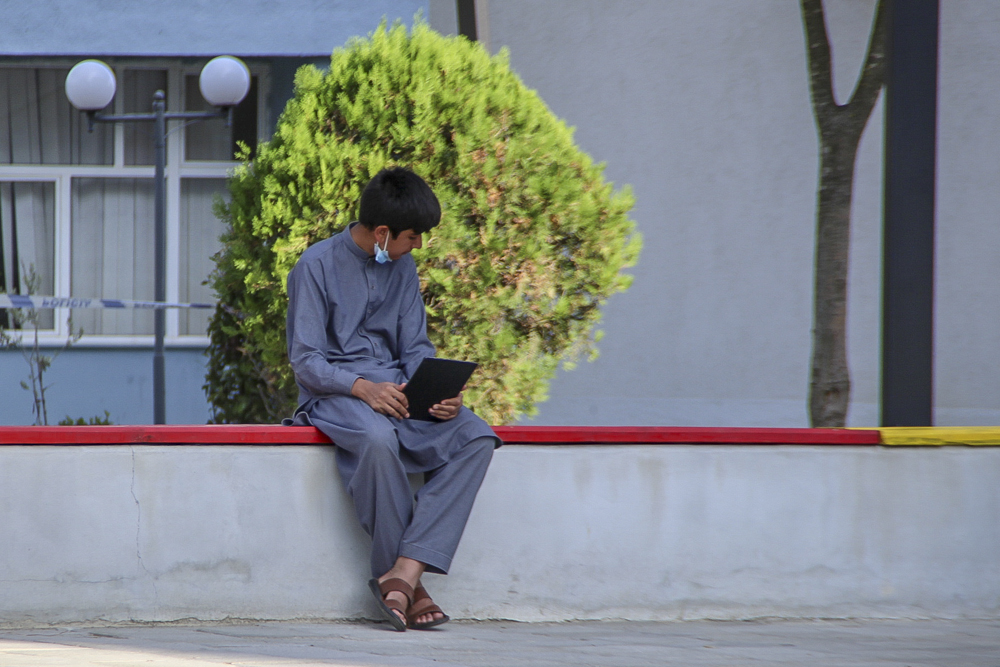 Fearing retaliatory persecution by the Taliban, adults and children suddenly found themselves in a new world. Photo: Isa Myzyraj.

All states still present in Kabul quickly initiated an evacuation of their personnel and endangered Afghans. Over 100,000 people have been evacuated so far. Albania is one of the three Balkan countries that accepted the U.S. request to host an indefinite number of Afghan citizens for a short period of time. The first group of refugees arrived at around 3 a.m. on August 27.

Everything was destroyed in 20 minutes

Rashed Amad Azizim never thought he would end up as a refugee in a small country in Southeast Europe. Azizim never heard of Albania or knew anything about it. But for him and other Afghans who have arrived, and continue to arrive, Albania will be their shelter from Taliban retaliatory persecution.

Azizim, 30, worked for an Indian company in the Afghan capital until a few weeks ago. But his daily routine was interrupted as the Taliban put Kabul under their control.

“Everything was destroyed in 20 minutes, everything I had built,” said Azizim, from Parwan province, dressed entirely in white. Unlike many others, he said he has no problem publishing his full identity and pictures.

While he himself managed to leave Kabul, his family was left behind.

“I have contacted them, but I am very afraid for their safety, because no one knows how the Taliban can behave from hour to hour,” said Azizim as he smoked a cigarette. A few meters away, some police officers guard the buildings in Tirana where the newly arrived refugees are staying 24 hours a day. “Considering what is happening now, I think the situation there is appalling,” Azizim said.

On August 27 the Albanian Ministry for Europe and Foreign Affairs announced in a press release on social media that a plane coming from Kabul would land in the military area of the Mother Teresa International Airport in Rinas, with 121 Afghan nationals on board. 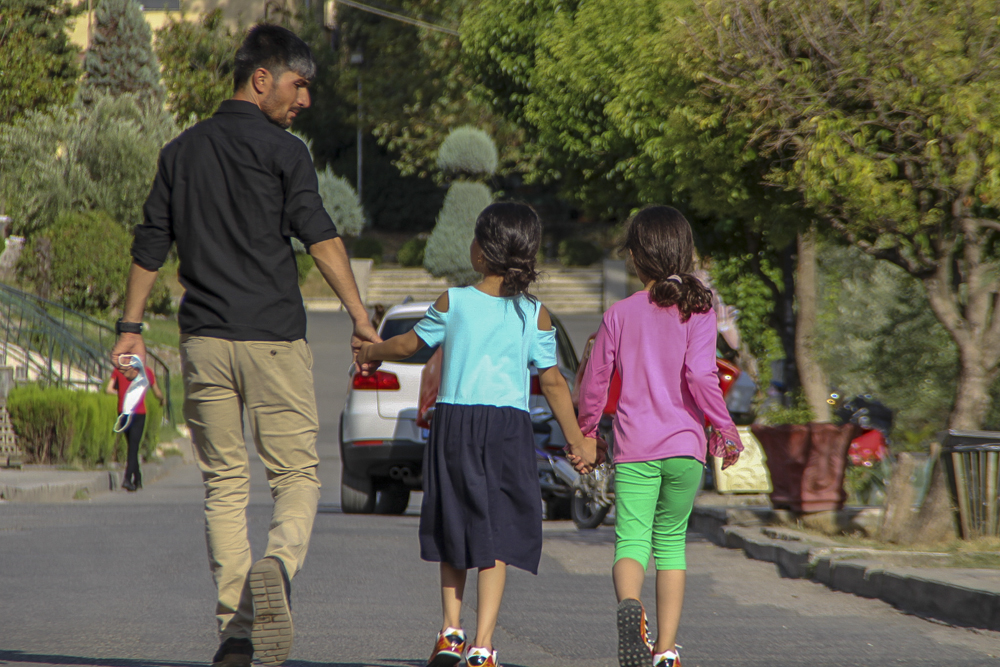 Albania is expected to accommodate up to 4,000 Afghans. Photo: Isa Myzyraj.

Over the next two days, four more planes landed, raising the number of Afghans settled in Albania to 457 by Sunday. After registering, some of them settled in hotels in Durrës, the rest in Tirana.

Less than 24 hours after leaving behind the chaotic Hamid Karzai Airport in Kabul, some children from Afghanistan took some donated toys and started playing in the courtyard of buildings 11 and 12 of the Student City in Tirana.

A few meters from their little ones, sitting on some colorful benches in the courtyard of the student dormitories, the parents are not so happy and joyful, as they experienced before their eyes the images from Kabul’s airport, which have shocked the world since mid-August.

Outside the walls of the dormitories, another refugee, Ahmed, along with two women and another boy, has just been to the police station located about 100 meters from the building where they are staying. On his way back, he said he is shocked by what is happening in his country.

“My story is a war story, violent and scary,” said Ahmed, who shared that he worked at a pedagogical university. “The future? Which future? Our present and the future have been destroyed.”

And then disappeared inside the enclosure where the media cannot enter.

Although 417 Afghans have already settled in Albania, it is still unclear how many Afghans in total will be sheltered there. The country’s Prime Minister, Edi Rama said at first that Albania would host several hundred Afghans. He later increased that number to 3,000 people in an interview with an Italian media, and again to 4,000 in another interview for CNN. Meanwhile, in an interview with the BBC, Prime Minister Rama stressed that “Albanians were once Afghans,” referring to the exodus of thousands of Albanian citizens after the fall of the communist regime in 1990. 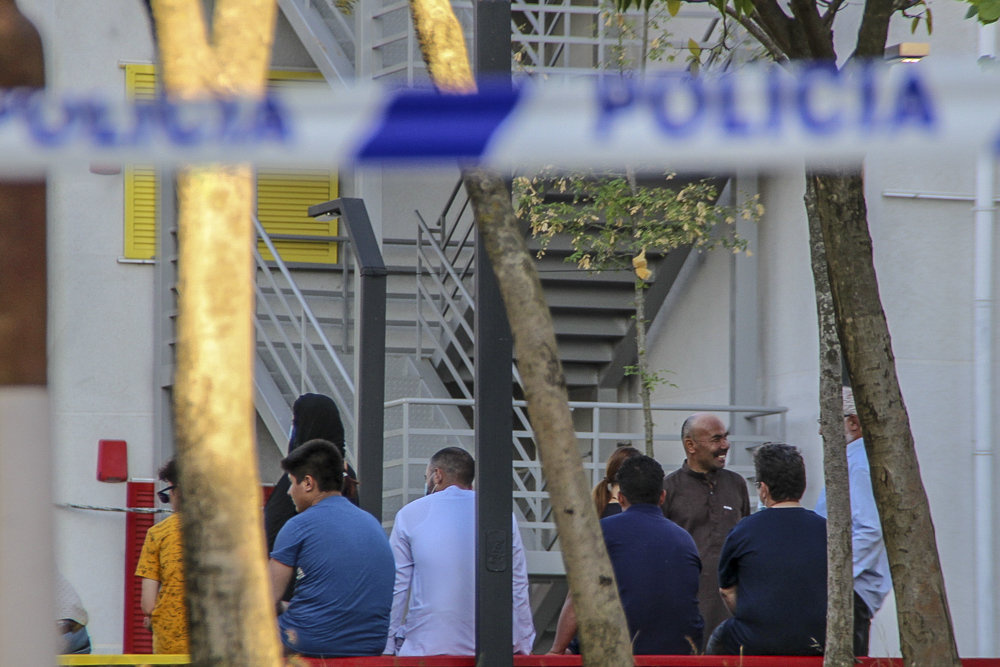 All Afghan refugees who came to Albania are being guarded by the Albanian police 24 hours a day. Photo: Isa Myzyraj.

All Afghan refugees who came to Tirana and Durrës are constantly guarded by the Albanian police, while the area, surrounded by police tape, is off limits for citizens. Afghans who want to buy something in the markets, to make medical visits or even go to the police station are accompanied by at least one state employee, and are not allowed to circulate alone.

Government authorities initially announced that Afghans would be temporarily housed in Albania until documentation and visas for the United States, where they will eventually settle, are ready.

But that changed again. Rama said that Afghans can stay in Albania forever if they want to stay.

Despite the chaos and terror of the Taliban, Azizim has not lost the hope that one day his nation will be rebuilt.

“I hope someone can manage the future of Afghans, because we are intelligent people, we work hard,” said Azizim. He hopes that someone will stand up to the Taliban so that women can go to hospitals and schools, work and empower their children.

“Today we are all sad, but I really hope that good things will return to Afghanistan,” he said, pulling his phone out of his pocket and smilingly pointing to the province of Parwan, where he was born.

Lina feels lucky that she managed to escape. “Women and girls cannot leave their homes, it is horrible to think that they are isolated, and worse is expected to happen,” she said. However, she still hopes that one day she will be able to return, at least to meet her family.