Tito lives on in Montenegro

Tito is back in Podgorica, but nobody knows why.

The hubbub surrounding the placement of a monument in honor of lifetime president of the Socialist Federal Republic of Yugoslavia (SFRY), Josip Broz Tito, in Montenegro’s capital, lasted until the monument was finally situated.

The decision to place the statue was made by Podgorica City Council at the end of October 2018. In the following weeks, up until the ceremony in Podgorica on December 19, Tito was an important topic in the public discourse, with assessments varying significantly. While some credited Tito for virtually everything they perceived to be good in Montenegro — even saying that he was the person to have laid the foundations for restoring Montenegro’s independence — others claimed that he was responsible for fratricide.

The initiatives for Tito’s return to Podgorica came from Mayor Ivan Vuković, who said that this wasn’t about Yugonostalgia, but “proof that Montenegro remains faithful to its anti-fascist orientation.”

Today, the restored monument, which had been kept in a storage room at one of Podgorica’s barracks owned by the Montenegrin Ministry of Defense for almost 30 years, attracts little attention, with just a few conspicuous meters of a white pebble path indicating the approach to the monument in a part of the park next to the Morača River.

Making the past ironic

The monument dedicated to Tito was unveiled on December 19, the anniversary of Podgorica’s 1945 liberation from fascist forces at the end of World War II.

The position of the statue is also symbolic. Tito now resides on the boulevard that formerly carried the name of Lenin, and which today is named after the Orthodox St. Peter of Cetinje.

Nearby is the bridge named after Blažo Jovanović, the first president of the Parliament of Montenegro (1976), while the boulevard cuts through Ivan Milutinović Street, named after a partisan hero who gave his name to the main city square during the time when the city was called Titograd, from 1946 to 1992.

Tito also ‘observes’ the building formerly belonging to the League of Communists of Yugoslavia, now owned by the ruling Democratic Party of Socialists of Montenegro, led by Milo Đukanović; this party renounced its communist legacy in 1990, and overnight declaratively became a social democratic party.

The apparent contradictions in resurrecting a monument to someone whose legacy ruling politicians have forged careers attempting to distance themselves from has not been lost on many Montenegrins.

“The irony is that Tito’s monument is erected by those who worked on the dissolution of SFRY,” Podgorica resident Predrag Nikolić told K2.0, before adding that Montenegrins, as much as they love or hate their rulers, are used to short-termism when it comes to the latest person to be venerated.

“As for the monument dedicated to Tito, people from the Parliament of Montenegro are already announcing that it won’t stand for long,” he said.

“I wasn't present at the opening because I believe it is hypocritical for people who disparaged Tito the most in the ’90s to now erect this monument under somebody's orders.”

The fact that Tito had previously been removed so that he wouldn’t be a reminder of history for those who — until recently — were ashamed of it but who now glorify him, is hurtful for the man who is perhaps the most recognizable individual in Montenegro when it comes to Yugoslavia.

Marko Perković, from the Tivat-based NGO General Consulate of the Socialist Federal Republic of Yugoslavia, wasn’t present at the unveiling of the monument and has not visited it to this day.

Perković and his General Consulate preserve the memory of SFRY by marking significant dates in its history and reminding Montenegrin citizens of the values of the anti-fascist struggle and of famous partisans.

“I wasn’t present at the opening because I believe it is hypocritical for people who disparaged Tito the most in the ’90s to now erect this monument under somebody’s orders,” Perković told K2.0. “I didn’t want to join them. In Tivat we regularly honor Tito, so there are no issues in that sense, and I will not give someone else the importance by being present there.”

Perković emphasizes that in Montenegro there are now many “converts,” who during the ’90s “were against Tito and disparaged Yugoslavia, and brotherhood and unity,” referring to the values of ‘brotherhood and unity’ between people and nationalities that was the central value upon which Tito attempted to build SFRY.

He claims that the people now backing the monument’s re-introduction are the same people who previously “had the idea to remove the monument that they were ashamed of and to hide it from the people.” 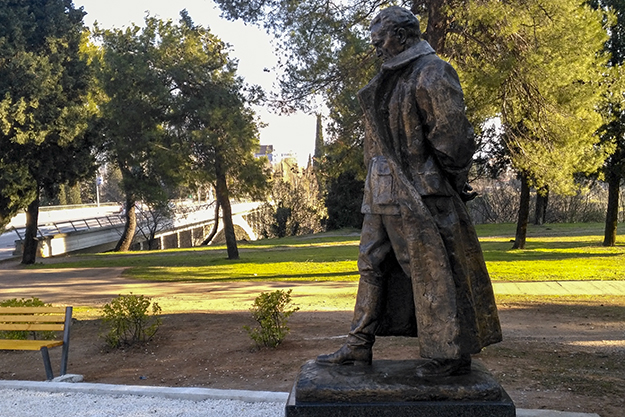 The monument dedicated to Tito, which has no flowers and few visitors, is situated on the boulevard once named after Lenin, and today bearing the name of St. Peter of Cetinje. Photo: Marijana Camović.

When the city was still called Titograd, the pedestal stood in the circle of the Masline military barracks, but was removed at the beginning of the ’90s and largely forgotten in the memorial room of the Fifth Proletarian Brigade.

“A monument dedicated to Tito wasn’t erected, but his sculpture was presented to daylight; until recently it had the value of secondary raw material, they were ashamed of it, vilifying it for the past 30 years,” Perković claimed, adding that a redrawing of history is taking place in accordance with the desires of those in power and “their daily political interests.”

“The uprising of July 13 [1941, which began in Montenegro under the leadership of the Communist Party of Yugoslavia], AVNOJ [the Anti-Fascist Council for the National Liberation of Yugoslavia], World War II, and now Tito are all being used, because apparently without anti-fascism one cannot enter the European Union, so now they want to act as anti-fascists,” Perković said.

He says his claims regarding hypocrisy and the ideological wandering of the government is supported by the opening of a German cemetery near to Podgorica two years ago.In this cemetery, the mortal remains of 64 German soldiers were buried, who all fought against partisans during World War II.

The Yugoslav Communist Party — which was founded in Montenegro in 2009 — alongside followers of the notion of anti-fascism, protested on the day that the cemetery was opened, not because the mortal remains of those who were long thought missing were buried there, but with the demand that the Montenegrin authorities take care of deserted partisan cemeteries; at the end of the ceremony, artist Tanja Maruša placed a bouquet with a five-pointed red carnation, symbolizing the partisan star.

Among those who opposed the re-introduction of the monument of Tito for ideological reasons are also representatives of parties in Montenegro who advocate for the rights of the Serbian minority, primarily MPs from the Democratic Front (DF) coalition.

DF brings together several parties, including the more nationalist orientated New Serb Democracy and the Movement for Changes; DF’s Andrija Mandić and Milana Knežević are currently on trial for the alleged attempted coup in October 2016, which the Prosecution claims was planned to take place on parliamentary election day.

During a parliamentary discussion on placing the monument last year, Mandić said that Tito was one of the symbols of dictatorship, and called upon his colleagues from the coalition not to go in that direction because “there are many better examples in our history that you should look up to.”

“However, he was a man of modest capabilities, an Austro-Hungarian corporal, a member of the 42nd Devil’s Division [a Croatian military unit famous for its ruthless actions in the territory of Serbia during World War I], who received two decorations for hanging Serbian grandmothers in Mačva,” Mandić stated ironically, while inventing and exaggerating details for effect and calling for the reintroduction of a monarchy.

The Serbian Orthodox Church representative pleaded with the authorities to “stop building the future of Montenegro on fratricide,” saying that it would be better to erect a monument to Mussolini than to Tito.

His party colleague, Slaven Radunović, also has a similar attitude, but relating to the Tito issue he also opened up the question of Kosovo’s status.

“Be careful in what you do, those of you who supported the decision to erect a monument to Josip Broz in Podgorica,” he warned from his Parliament bench.

“Essentially, he is the forerunner of Kosovo’s independence. In 1974, he adopted the Constitution which enabled the later secession of Kosovo [the 1974 Constitution gave greater autonomy to the then Autonomous Province of Kosovo, which was a constituent part of the Republic of Serbia],” Radunović said in the course of the discussion.

“Besides this, he is a man who prohibited Serbs and Montenegrins from Kosovo — those who were persecuted by Ballists [an anti-communist movement made up of Albanians from multiple states, active during WWII] and occupiers of Kosovo — from returning to Kosovo after the war, thereby directly affecting the demographic structure.”

Such attitudes received support from the Metropolitan of Montenegrin and Coastal Amfilohije, a person with significant influence in Montenegro. The Serbian Orthodox Church representative pleaded with the authorities to “stop building the future of Montenegro on fratricide,” saying that it would be better to erect a monument to Mussolini than to Tito.

From the moment the intention to once again expose Tito’s monument was announced, many in Montenegro asked the question “Why now?” There has been little coherent response.

The hastiness of this decision and issues in its implementation are reflected in the fact that the text inscribed onto it was changed just a day after the monument was placed; on December 18, a plaque in front of Tito’s figure read: “Josip Broz Tito 1892-1980. Thankful citizens of Titograd and Podgorica,” whereas just a day after its unveiling, the text was divided into two — one plaque with the name and year, and the second, placed on Tito’s right hand side, on which gratitude is expressed.

Besides Tito’s statue in Podgorica, multiple monuments have been unveiled to polite public applause in Montenegro in recent times, although there appears to be little coherence in the messages conveyed. In Nikšić, President Milo Đukanović himself last month unveiled a shiny new statue dedicated to Komitas, who he described as “fighters for Montenegro’s freedom during the Austro-Hungarian occupation in the Great War, and fighters defending the state dignity after the violent coup by Serbia in 1918.”

The last significant statue-erecting project in the region — the much criticized Skopje 2014 — has left Macedonian society facing a dilemma over how to proceed now that the instigators are out of office. At some point in the future, Montenegrins seem set to find themselves facing similar confusion over how to address the monumental legacy of the country’s current leaders.K