To be or not to have

Two emerging actors on finding their feet in Kosovo’s film and theater scene.

In 2012, two young aspiring actors joined the Dramatic Arts branch of the Faculty of Arts at the University of Prishtina. While two different routes had led them there, and two separate paths would lead away, both have sought to forge a career in Kosovo’s acting world.

Talking to both, it is clear that this is a difficult environment in which to thrive, where compromise and passion have to overcome hardship. One, May-Linda Kosumovic, had returned to Kosovo from Canada.

“They threw me out of the house when I was 18,” Kosumovic jokingly tells K2.0 about her family. “My father said that I need to become independent, [telling me] to take an apartment alone or with friends, start on my own, find a job.”

She responded by moving to Prishtina, and finding a few small acting roles in adverts before enrolling at the University. 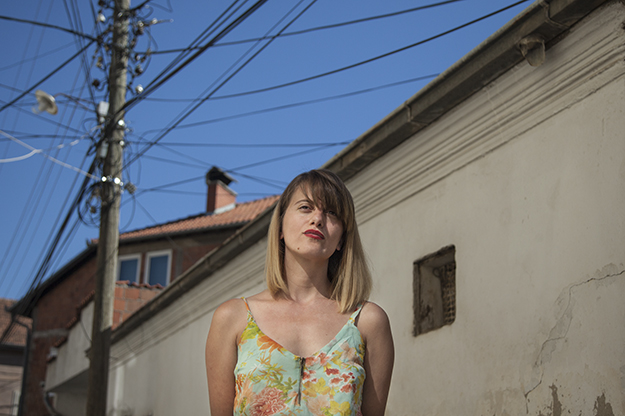 Alketa Sylaj grew up in Prishtina and found acting to be a natural talent. Photo Majlinda Hoxha / K2.0.

The other, Alketa Sylaj, grew up in the same neighborhood as the Dodona Theater in Prishtina, and trips to see plays there helped develop a love of acting that had begun in childhood. Though Sylaj sarcastically points to an absence of other abilities as also being crucial in her decision to pursue an acting career.

“It’s not like I’m good in maths or physics,” she tells K2.0. “So I was thinking if there is a place where I can be good, it’s acting! Being and acting goofy.”

This self deprecating sense of humor exhibited by both actors is seemingly essential in the Kosovar acting scene, with both roles and payment scarce. Kosumovic believes that any pretensions of grandeur are absent amongst her peers.

“You have to love it, I do not think anyone goes into it for the money,” she explains. Kosumovic is now employed by the National Theater of Kosovo, having passed an audition in 2015 to become a resident actor.

The institution has undergone tumultuous times in recent years, plagued by allegations of political influence over staff appointments in leading positions. Kosumovic believes that this reputation discouraged many young actors from applying to the Theater, including herself. However, the employment in February 2015 of Lumnije Sopi and Ilir Gjocaj as acting director and artistic director respectively helped rebuild confidence.

“When we saw that things started to get better, that there are better shows being made, some good directors coming from other countries, but also good directors from here, then everyone wanted to apply,” Kosumovic recalls.

“If you rebel, they say ‘Oh look at the diva’ and then they replace you, and tell the others not to take you, because you cause trouble.”

However, the National Theater’s relationship with its country’s actors still hasn’t been completely healed. While all actors appreciate the comfort of a regular salary, the level and the nature of the payment is currently the matter of a dispute between the Theater and its resident actors. The actors have formed a worker’s syndicate and in March of this year and held a protest on International Theater Day against low wages, threatening a potential strike.

Though Sylaj has tended to work in film and independent theaters, she also believes that the treatment of actors in Kosovo borders on the contemptuous and that they are viewed as easily replaceable.

“If you rebel, they say ‘Oh look at the diva’ and then they replace you, and tell the others not to take you, because you cause trouble,” she explains. “They can say, if you do not come, another person will.”

Sylaj accepts that insecurity over work is often part of the acting world. As she puts it: “Even Kevin Spacey still goes to auditions, and in the end Daniel Day-Lewis takes a role for which Spacey has done rehearsals and training for months.”

But she insists that in Kosovo an actor’s position is even more precarious.

“Here it is different,” she explains. “They promise you a role, and you are sure that it is yours, you refuse other projects, and you get introduced to other people in the project you are in, and in the end, they just change you.”

Sylaj says that the majority of projects hire actors without contracts. “You are so replaceable that you subjugate to such conditions, and are even scared to ask for a contract, because you fear they will fire you.”

She says that working without contracts is a rule, not the exception in Kosovo. This naturally creates an unpleasant aspect of competition on set. Sylaj states an actor will often help develop a role and those that can not fight for their character to have a prominent position also risk being cut.

In addition to helping make ends meet, Kosumovic believes that a busy schedule is the only way to grow as an actor. “Talent is not enough,” she claims. “You have to work hard, because otherwise you stagnate. You can not update yourself anymore.” 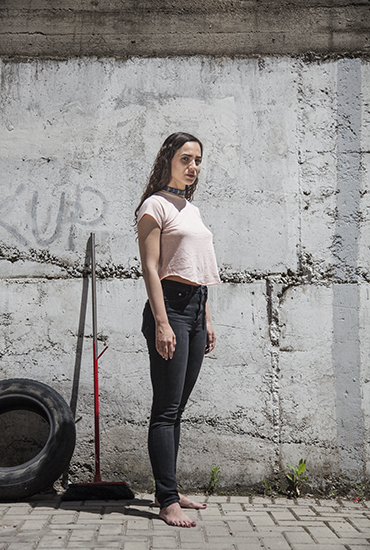 May-Linda Kosumovic has taken a proactive stance to the Kosovar film world, even writing scripts when the roles she sought failed to materialise. Photo: Majlinda Hoxha / K2.0.

Kosumovic also feels it can be crucial to make your own destiny. If it is difficult to find the projects you desire, write a role for yourself. It is something she has done herself, writing a script that a director friend of hers fleshed out into a short film. The resulting work, “A Performance,” ended up winning the National Competition at DokuFest in 2016, and, fittingly, tells the story of two actresses struggling to make ends meet.

Currently, Kosumovic is participating in a feature film with Anton Ndrecaj as director, and she is playing the role of a heroin addict going through withdrawal. To prepare for the role, she will ask for first hand experiences from two of her friends — a process she will undertake under her own initiative as rehearsals and pre-shooting discussions are rare in the Kosovar film industry.

During Yugoslav times, Kosovo used to make up to two films a year, alongside documentary and animated films. There was a single film house “Kosovafilm,” with a high state budget. Now there are 126 registered film houses, but output has dropped.

Sylaj, whose main passion is film acting, echoes Kosumovic’s suggestions that films are often made hastily, with a lot of on set improvisation. She points to the erosion of the film industry in the country in the late ‘90s and early 2000s as a major cause.

Such was the setback in cinematography, that nowadays Sylaj feels that everything is being done anew. “The majority of the film team are foreigners, the cameraman, the director of photography, and others”, says Sylaj, who often has to help, like other actors, with technical or organizational issues. Although she enjoys that process, she admits that it is a distraction from focusing on her role and the creative process.

Despite these issues Sylaj, still far prefers working in film than in theater, where she feels rigid and outdated acting methods, and stereotypes about society are prevalent.

“There is a template for the entire range of a character, like seven colors only,” she explains. “So when you act wicked, act wickedly until the end.” 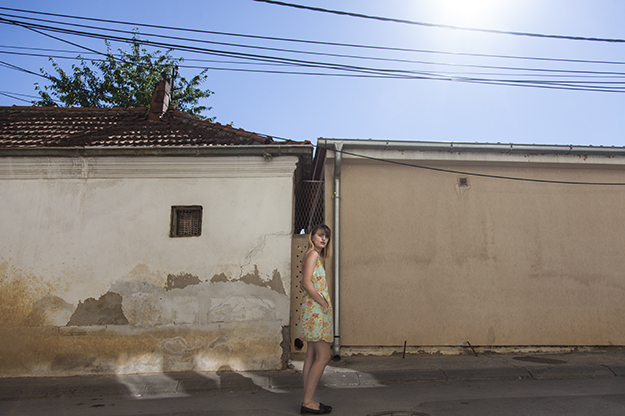 Sylaj believes that the empathy has often drifted out of acting in Kosovo, replaced by theatrics and melodrama. Photo: Majlinda Hoxha / K2.0.

She believes this melodrama and steadfast discourse on acting has detached it from reality, telling K2.0 that in Kosovo actors have difficulty in acting “a simple ‘I’m sorry’, without that mimic and mask,” before impersonating in a theatrical tone: “I! Am! Sorry!”

The answer for Sylaj is simple: empathy. “All you need is to see people’s pain and character, so people can say that “I feel like they have done it for me!”

As well as causing her frustration as an actress, Sylaj points to occasions where this reliance on stereotypes can also be damaging for society. She mentions a script she read, which portrayed LGBT persons as happy, promiscuous, dancing and going wild with the rainbow flag, before adding that this a particularly offensive stereotype in Kosovo, where LGBT persons are one of the most oppressed communities.

Objecting to roles like this has often left Sylaj in a difficult place in the acting world. “I am an idealist,” she explains, “and it is very difficult to be idealist and an actress, because you get treated like a fool sometimes. People ask ‘why do you care?’ Just go with the flow, do what the director asks. That you play a stereotype, a total cretin, is no big deal.”

It is here where Sylaj’s motivation for continuing her life as an actor in Kosovo becomes clear, and it is clearly informed by her sideline as an artist.

“It is our responsibility to change these things that I see, and I talk about them in the projects that I participate in,” she explains. “You are not just someone that does a job and then goes home. I see it as a greater position with more responsibilities. You are an artist. You have to say something, to push society to reach another level of awareness, to change hopefully for the good.” 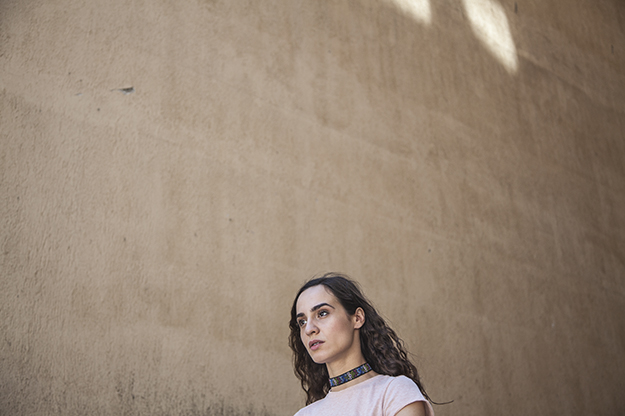 May-Linda Kosumovic views acting as a way to explore the limits of the human experience. Photo: Majlinda Hoxha / K2.0.

While Sylaj’s passion is rooted in social change, Kosumovic seems to find her raison d’etre in developing as an actor, exploring limitless possibilities, and in the intense highs and lows of life in the theater.

She speaks enthusiastically about working alongside Hungarian director, Andras Urban, on Jeton Neziraj’s controversial play “Bordel Balkan.” Kosumovic considers it one of the best plays she has participated in thus far, not because of the large interest of audiences, but because she developed as an actress. “It was a pleasure because you discovered new things on yourself, you explored,” she says.

From day one, Kosumovic saw that the process of doing exercises was going to be unorthodox and creative. “On the first meeting he did not do an audition, he just wanted to know where our limits are,” she explains. “Someone said that he does not want to talk about religion, Allah, about the hijab and stuff like that. Everyone had their things, which is fine, but I said ‘I don’t have any.’ He asked me if I was sure, and I replied that so far in everything I have done, I had no limits.”

Working with Urban almost never happened, as Kosumovic was initially hesitant to take her place as a National Theater actor, as she knew the physical and mental strain a long run of shows took on her. “I get really scared in the theater,” she reveals. “Two weeks before a premiere I get stressed, I can not eat anything and I easily get into arguments, especially with my family.”

Both the stress and the long working hours during a run are an exhausting experience but still a crucial part of Kosumovic’s life. “It makes me feel the best and the worst in the world,” she explains. “It makes me feel alive, with highs and lows. I can not live my life in a flat line. This is how I survive. Those emotions give me the greatest satisfaction in life, and keep me fresh so that I can always be new into acting.”K