Travis Wilkerson on the search for art in activism - Kosovo 2.0
Lately | DokuFest 2017

Travis Wilkerson on the search for art in activism

The moment that shaped filmmaker and activist Travis Wilkerson’s latest project was the moment he had to explain it to a packed auditorium of 400 famous people from the art world, as part of the conditions for his grant.

The film he was making was highly personal. In 1946 Alabama, Wilkerson’s great-grandfather S.E. Branch had shot and killed Bill Spann, a black man who had walked into his convenience store. Branch was charged with murder, but the charges were soon mysteriously dropped.

“I was about to finish my presentation, but I felt so overwhelmed by the weirdness of that space and the context,” recalled Wilkerson. “Instead of what I was going to finish with, I stood up and said ‘I want everyone to chant Bill Spann’s name. I am not going to get off stage until you join me in this chant.’”

Initially, Wilkerson’s audience were not exactly receptive to the idea. “They were all these art world people who would never do anything like that. They’re just sitting there, going…” Wilkerson paused, and imitated bourgeois chatter in the same way he might imitate a fish feeding. “But I just kept doing it… and eventually, everybody started chanting. It was this chilling thing for me. An act of purging this catastrophe from my family and this other family, trying to move forward. I thought, this has got to be a form.”

The resulting project was his documentary-theatre hybrid “Did You Wonder Who Fired the Gun?,” which is screening Saturday night (Aug. 12) as part of DokuFest’s closing ceremony. In addition to the special retrospective of the experimental American filmmaker’s career that has played at this year’s festival, Wilkerson himself sat down yesterday (Aug. 11) to give a masterclass on his development as an artist and what radical cinema means for him. 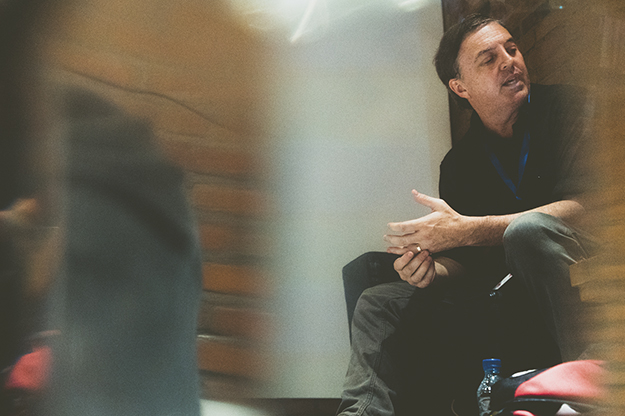 Wilkerson is no stranger to giving classes, having taught at the University of Colorado, CalArt and Vassar college in New York. Photo: David Stanley / K2.0.

As much an ardent left-wing activist as anything else, Wilkerson still grapples with cinema’s inability to affect social change. He gave as an example Michael Moore’s 2004 documentary “Fahrenheit 9/11,” which he explained was explicitly made to prevent George W. Bush’s re-election. The film broke box office records and won numerous awards including the Palme D’or at Cannes… and then Bush was re-elected, with a huge increase in the number of votes he received.

Moore’s error, according to Wilkerson, was to hone too close to conventional filmmaking. “I’m convinced that it’s a grave error that people who wish to make socially-engaged work make — they simply use standard techniques and standard discourse to express new and radical ideas. I think it’s fundamentally self-defeating. You have to find a form that expresses something about the content, or else you’ll fail every single time.”

This quest to find those forms has shaped Wilkerson’s career. For his first feature, he travelled to Cuba to interview a legendary film propagandist Santiago Alvarez, but upon return to the US discovered that technology had failed to record their conversations. Hugely inspired by their meeting, Wilkerson nevertheless set about constructing his own video essay out of a collage of Alvarez’s own films. The end product, “Accelerated Under-Development,” is an attempt to recapture the essence of those conversations.

In the two films that followed, Wilkerson delved into the territory most personal to him; his hometown of Butte, Montana. “An Injury to One” plays with the documentary form to uncover a brutal lynching forgotten by the once booming copper town. “Who Killed Cock Robin?” portrays its industrial rust and social decay through semi-improvised drama.

“You know you’re failing to achieve the discourse you’re hoping for when you’re sitting in a theatre and you’re the only one laughing at your own movie.” - Travis Wilkerson.

A clip of an earlier unfinished worked called “Hollywood is an Alibi,” screened at the masterclass, revealed the trial and error of striking out alone as an artist. The visuals are too static, Wilkerson’s narration too severe. It’s a history lecture that no one wants to make notes on.

What’s more, his attempt to lighten up the tone by riffing on a ‘50s cop show went over everyone’s heads but his own. “You know you’re failing to achieve the discourse you’re hoping for when you’re sitting in a theatre and you’re the only one laughing at your own movie,” he said. “It’s super awkward.”

Thanks entirely to his wife, however, he ended up making the the acclaimed “Machine Gun or Typewriter?,” which he said changed the course of his filmmaking forever. “She was the instigator of this. I initially started working on it just so that she would stop bugging me. I had to prove that it wasn’t going to work and there was no way of doing this,” he said. “What I discovered was that she was absolutely right and I was wrong.”

Instead of a sombre history lesson whose humour was obscure to all but him, “Machine Gun or Typewriter?” was much more daring. It tells the fictional story of a man tracking down a lover over an illegal pirate radio broadcast, who narrates Wilkerson’s documentary as though it were his radio show.

“For me it was a tremendous revelation. I’d gone from barking at the audience to whispering to the audience, to inviting them into something intimate,” he said.How to make movies, with all their financial restrictions and pressures, as intimate for the audience as it is for the filmmaker is one of several questions that continues to swim around in Wilkerson’s thoughts.

“I was at DokuNights last night and it’s all being livestreamed and everybody is tweeting it. It’s this funny feeling of the loss of ‘we’re right here, right now,’” he said. “I love that feeling, especially as a teenager.” He recalled watching Sonic Youth perform in 1986, but the band were in such bad moods that at one point the bass guitarist stormed off stage. The rest of the group began improvising, singing ‘we’re so fucked up,’ until frontman Thurston Moore threw his guitar through the ceiling and said, ‘I’m going to go do heroin. F**k you.’”

The teenage Wilkerson was amazed. He’d just witnessed something no one else would ever see again. It’s this kind of unique ephemeral experience he wants to recapture, whether it’s in editing films live (as Vincent Moon did at Prizren’s historic fortress later that night) or making his own emulsions to paint onto film strips, which he’d then project at a single screening never to be digitised or shown again. “We’re at a point where moments of singularity like this have a power that they didn’t used to have.” 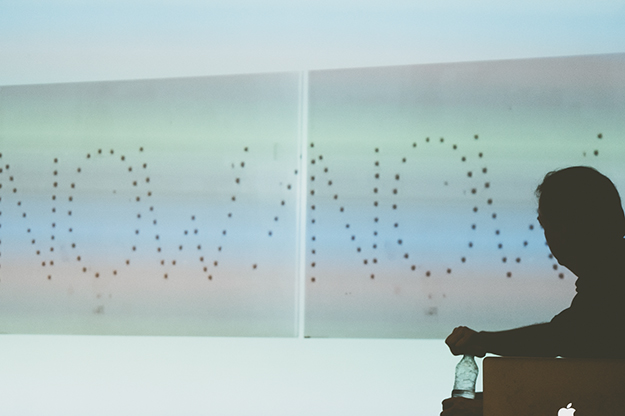 Another example came while discussing how his radical filmmaking journal, The Now! Journal, addressed the Ferguson protests. Michael Brown, an unarmed black 18-year-old, had been shot dead by a white cop, in ‘self-defense.’ Wilkerson screened two experimental shorts from the journal at the masterclass, one by Alex Johnston and another by Lydia Moyer, but it was his own response that came back to the power of the singular event.

What had hurt Brown’s family most, Wilkerson explained, was that his body had been left on the street for four and a half hours. As tensions in the town flared, they asked for moments of silence and genuine contemplation. “So I created a four and a half minute clip of black. In a darkened cinema, it’s actually quite intense. When you’re sitting in a room full of people for four and a half minutes in total silence, it’s a real cinematic experience.”

Where is the line between activism and art? He broke down his thought process with footage he’d shot at a million-strong protest against anti-immigration legislation in Los Angeles in 2006. The masterclass was the first time he’d shown it to anyone.

“I came to document, I came to be an artist, I came to be a journalist, I came to be an activist, but what I’m left with is: which side do I join?” As the camera moved from the flowing crowds to a black marble wall reflecting their waving flags, Wilkerson recalled, like an excited schoolboy, the thoughts that were racing through his mind: To march and sing? To stand back impassive? Or to film a blank wall in the hope of reaching some deeper truth?

“Contained within that single piece of footage is the dilemma I’ve been facing my whole career,” he concluded. “What am I there for? How do I divide my attention and what are my goals? I still don’t know the answer to that. I’m still not convinced film can do anything.”

However, he’s also not yet convinced that it does nothing. “I’m especially interested in the way history lives now,” he explained. “I’m interested in the way there is this compression, and in fact history isn’t even a real thing because we are living in the consequences of history at all times.”

Like the lynching in Butte, the death of Michael Brown and the murder committed by his great-grandfather, thematic branches grow between each of Wilkerson’s films, compressing events hundreds of years apart. The brief “Sand Creek Equation” brings the 2008-9 war in Gaza and the 1964 massacre of Native Americans in Sand Creek, Colorado inescapably together.

This compression is ultimately what drove him to make “Did You Wonder Who Fired the Gun?” In one scene, he films the graveyard where Bill Spann is buried.

“This graveyard includes someone murdered by my great-grandfather,” he reflected, “and I’m in that same place, as a person who gets to go to a place like Prizren, who gets to show his work, who has a nice camera that he’s filming with. That distance between what that act meant for that family, which is catastrophic… apocalyptic, and what it meant for my family, which is seemingly no consequences at all. I found that very unsettling.”

The final film, he explained, is his attempt to convey that “extremely powerful and unbelievable experience” to the audience. After seventy years, “Did You Wonder Who Fired the Gun?” closes the gap between two families and a single destructive event. Catch it at Lumbardhi tonight as DokuFest closes.K