Trying to turn a corner

LGBTI activists in Macedonia have hope for a better future.

In a 2016 report, the European Association of lesbian, gay, bisexual, trans and intersex people (ILGA Europe) rated Macedonia as one of the most non-friendly Balkan countries when it comes to LGBTI rights.

Alongside Bosnia and Herzegovina, Macedonia is also the only country in the region that has never held a pride parade. Homosexuality in Macedonia was only decriminalized in 1996, and when the first anti-discrimination law in Macedonia came into force in 2011, discrimination on the grounds of sexual orientation and gender identity were not covered.

The LGBTI community in Macedonia still face discrimination, hate speech and violation of their human rights because of their identity. A 2015 survey conducted by the US-based National Democratic Institute (NDI) revealed that 66 percent of LGBTI people surveyed in Macedonia had been verbally harassed or abused because of their sexual orientation or gender identity.

Subversive Front, an association that aims to take a critical approach to gender and sexuality, has worked on 75 cases of discrimination against LGBTI people in Macedonia in the last three years. Most of these cases were hate speech and hate crime cases.

Subversive Front’s president, Antonio Mihajlov, tells K2.0 that these cases are wide ranging and permeate state institutions. “Most of the perpetrators of these acts are men with homophobic beliefs, but in some cases the perpetrators are the institutions themselves,” Mihajlov says, adding that the police especially violate basic rights.

Mihajlov believes that discrimination on grounds of sexual orientation or gender identity is underreported, because of the lack of trust from LGBTI persons both in state institution, but also existing LGBTI organizations. “The biggest problem is the lack of knowledge in the community about the mechanisms which exist to protect their human rights,” he says. “It’s very important to have an organized community which always observe the authorities and report cases of abuse — not just as victims, but also as witnesses.”

LGBTI activist Kocho Andonovski was attacked in Skopje before the country’s March of Tolerance in 2012. Today, he is the executive director of the LGBTI Support Center run by the Helsinki Committee for Human Rights in Macedonia. The center has been attacked with stones six times, but no charges have ever been brought for the perpetrators of these attacks.

Andonovski does not believe that there is a genuine hatred towards the LGBTI community in Macedonian society, saying that these attacks are instead organized and well-planned. “In the videos of the stoning of the LGBTI Center for Support we can clearly see that the attackers were very well organized,” he tells K2.0. “They knew exactly what they were doing and how.”

The last attack on the LGBTI Centre for Support was on the organization’s second anniversary, which was celebrated at a former gay bar in Skopje called Damar. For Andonovski, the timing of the attack is evidence that it originated from organized political structures, and aimed to frighten the community.

“The case of the attack on us at Damar in Skopje just shows us the political background of the violence,” Andonovski claims. “Damar was a gay bar in Skopje for 10 years and was never attacked as such. It was attacked only once — when we were celebrating the anniversary of our Center.” 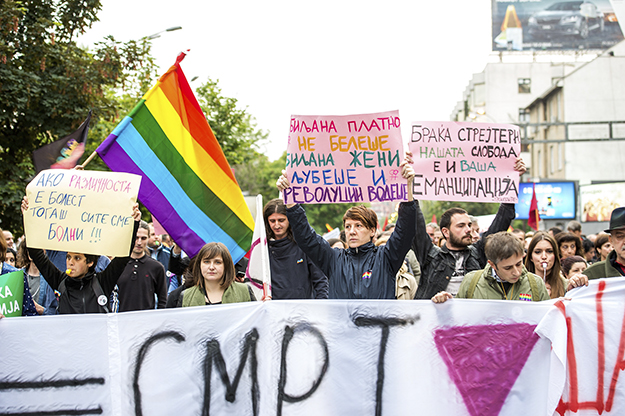 Currently, a new anti-discrimination law is being implemented which will include ‘sexual orientation’ and ‘gender identity,’ as a basis of discrimination. Mila Carovska, the current Minister of Labor and Social Policy tells K2.0 that after the implementation of the new law, the Ministry will work on the harmonization of all other laws with this one in order to gain equality for LGBTI people in the society.

“Our most difficult challenges when working with this community is to provide them equal access to employment, equal access to healthcare and inclusion in social life,” Carovska tells K2.0. “We can reach that only if we reduce or eradicate hate speech and the acts of violence. The struggle against discrimination, hate speech and hate crimes is the priority not only of my Ministry, but of the whole country.”

Eradicating hate speech will be a complicated task for the Ministry. Public hate speech towards the LGBTI community in Macedonia is very common, including by journalists and the media. Many have been warned by the Council of Ethics in Media.

For Milenko Nedelkovski and Janko Iljoski, two prominent media figures, things were treated even more seriously after LGBTI activists reported them for hate speech. Both Nedelkovski and Iljoski were charged for spreading hatred, discrimination and intolerance towards the LGBTI community on the internet after they posted homophobic posts on their Facebook profiles.

As well as hate speech, more grievous crimes have also been inflicted on LGBTI individuals in Macedonia in recent years. In 2013, actor Petar Stojkovic had his house vandalized, after he came out publicly as gay. A queer iftar was scheduled to happen this year during the Muslim holy month of Ramadan in Tetovo, but was cancelled after threats were directed toward the organizers.

“The main principle of human rights is that my right ends at the point where your right begins and you should never pass that border, no matter how convinced you are that your right is more correct than mine.”

It is not the first time religious institutions have been involved in incidents surrounding LGBTI rights. According to Antonio Mihajlov, religious communities in Macedonia often offer public support to right-wing movements and political parties, especially on LGBTI issues.

Mihajlov points to an incident in which figures from the Macedonian Orthodox Church gave their hate speech laden backing to former Minister of Labor and Social Policy, Spiro Ristovski, after he said that his party, VMRO-DPMNE, would never allow homosexuals to get married and that their party promotes a “healthy nation.”

For Andonovski, it is important not to make an enemy of religion, while ensuring that homophobic elements are tackled. “Religion is a very powerful tool in the Balkans and I do not think that we as a movement should go into a lost battle with the religious communities,” he says. “We have nothing against the people who believe and practise different religions. We have many people inside the LGBTI community that are religious.”

Both Andonovski and other activists’ grievance is when religion puts a certain category of people under threat and is instrumentalized by politics. He calls for a policy based strongly on human rights for all. “The main principle of human rights is that my right ends at the point where your right begins and you should never pass that border, no matter how convinced you are that your right is more correct than mine.”

K2.0 tried to contact both the Macedonian Orthodox Church and the Islamic Religious Community of Macedonia but neither provided answers to our questions.

Visibility in the march

The gay scene in Macedonia is very small. There are no gay bars, even though in the past there were a few in Skopje, as well as some gay friendly bars that used to organize “gay nights” in Skopje and Kumanovo. According to activists, it was political circumstances that made the public space less reachable for the LGBTI community.

However, Kocho Andonovski explains that the LGBTI community has recently made efforts to re-enter the public space by taking part in big social movements that were aiming to end the rule of former Prime Minister, Nikola Gruevski.

“We, as a community, were a visible part of the Colorful Revolution, of the students’ protests and many other movements that happened in Macedonia in the last 10 years,” he says. “This was our way of conquering the public space and making allies with a lot of other communities that were marginalized as well by the former regime.”

Zorica Nikolova runs a safe house which welcomes LGBTI people that have suffered violence, discrimination or have become homeless as a result of their sexual orientation or gender identity. “We provide a process of adaptation for our users, and after that they slowly start going back to the public spaces and feel safer,” she explains. “We also provide a possibility to go to events that are LGBTI-friendly so the people would go through a process of resocialization.”

Nikolova also sees a change in Macedonia, but for her the struggle for a safe country for everyone continues, since people are still coming to the Safe House seeking support. 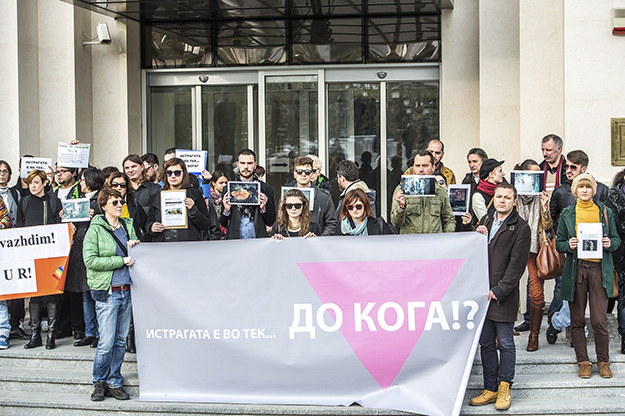 Protests in 2014 helped LGBTI activists reclaim some of the public space in Macedonia, but a pride parade is still yet to happen. Photo: Vancho Dzambaski.

In December 2014, LGBTI activists held three protests each week in front of the Public Prosecution Office protesting the authorities’ failure to respond to several hate crimes in recent years. For Antonio Mihajlov this was a way for the LGBTI community to take over the public space, but a parade would also be a victory.

According to Mihajlov, a parade has not yet happened in Macedonia because of the lack of political support when VMRO-DPMNE were in power. “Now after the change of government if we organize a Parade, I believe it would be successful since we have an organized community and we have political support which is not only declarative, but also is being worked on concrete measures,” Mihajlov says. “Parades exist because of the right to public space and active participation in creating those public spaces.”

Minister Carovska tells K2.0 that her government will work to make Macedonia an equal country for all of its citizens. “That is why we create policies for inclusion and integration of all communities in the society, including the LGBTI community,” she said.

This change in rhetoric makes Andonovski believe that these are historical moments for LGBTI activism in Macedonia, as he believes it is the first time that they have the support of the political leadership in the country. “We are in a very strange position after 10 years of public humiliation, marginalization and violence towards LGBTI community by the former government,” he says. “Now we have the support of the state leadership for the first time in Macedonia, and we hope to see that support from the leadership come down to the institutions.”

LGBTI activists now see a light at the end of the tunnel with the new anti-discrimination law, but this is not the end. Their goal is human rights based policy being ensured and Macedonia as a more tolerant and an equal country for all of its citizens.K