Disabled children’s right to education is their most violated right.

The first activity was held on Monday (Dec. 4), a discussion titled “Access to education.” Participants in the discussion were Hilmi Jashari, Kosovo’s Ombudsman; Alberta Alihajdari, an education expert and member of the German Society for International Cooperation (GIZ); and Ilirjana Geci, member of the Kosovar Forum for People with Disabilities.

Jashari stated that the education sector is one of the fields in which the most drastic violations of human rights are committed in Kosovo. “You needn’t be an expert in the field to reach this conclusion. It is clear that in most cases, schools in Kosovo do not provide physical access for people with disabilities, thus most of these people are excluded from the sector,” Jashari said.

According to Jashari, it is important to initially guarantee equal access for all people to school facilities, before moving on to other issues, which are plentiful in Kosovo’s education sector. The Ombudsman stated that although Kosovo’s legislation is well adapted, and in line with international legislation regarding the provision of education opportunities to disabled children, their access to education in practice is lacking, since the law has remained only a promise, instead of being implemented. Laws in Kosovo guarantee the involvement of all children in education, but in practice this does not happen. 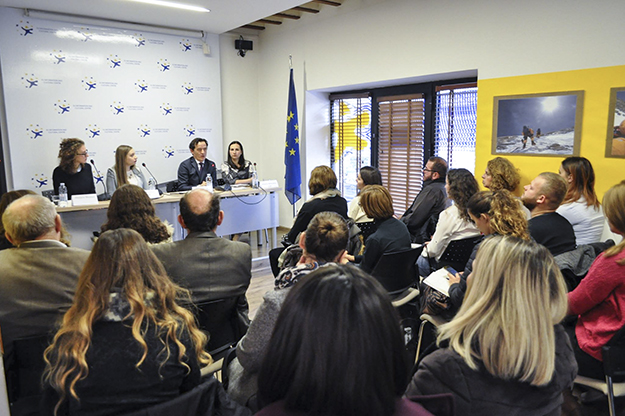 Jashari stated that this lack of implementation by competent ministries and the government in general should elicit a natural counter-reaction from the Kosovo Assembly. This institution, which according to the Constitution serves the role of overseeing the Government, should utilize its right and seek accountability from the Government.

“94 percent of Assembly work [in the last mandate] was oriented towards approving laws and only 6 percent in seeking accountability from the Government,” said Jashari, citing data obtained from monitoring conducted by the office of the Ombudsman during the last Assembly’s mandate.

“In normal conditions, a democratic state that shows such a parliamentary performance cannot function properly,” he stated. According to him, it is also important to have the voice of civil society heard more, as well as to consider contributions and recommendations which are given by different organizations.

Alberta Alihajdari of GIZ agreed with Jashari’s views. She also spoke about the lack of access to education for disabled children as a key issue regarding violations of human rights in education, saying that inclusion is a precondition for qualitative education.

“There are a multitude of violations, especially against certain groups such as minorities, the LGBTI community and people with disabilities,” said Alihajdari. She went on to say that most people of these communities do not have any access to education.

In school books people with Down Syndrome are still defined as people with 'Mongolian idiocy,' which is an offensive term.

Alihajdari also criticized the Ministry of Education, Science and Technology, saying that it must make clearer and more inclusive education policies. According to her, there is also a need for intervention in school texts as they are old and have an improper approach towards people from vulnerable communities.

Ilirjana Geci of the Kosovar Forum for People with Disabilities also identified challenges that face people with disabilities in education. In addition to physical obstacles, Geci focused on dealing with other issues which are related to education personnel and curricula. She highlighted that discriminatory or improper language is used against these groups in school books.

Geci mentioned the fact that in school books people with Down Syndrome are defined as people with ‘Mongolian idiocy,’ which is an offensive term. Furthermore, Geci also highlighted assessment teams for children with disabilities, saying that these teams are not at all clear on their work.

At the end of the discussion, panel members implored state institutions to consider recommendations given by civil society and to be cooperative in this regard. Furthermore, they highlighted that it is important to act as soon as possible, since the situation is alarming. Another suggestion that stemmed from this discussion was to increase the budget that is used for the education sector, as this was considered as the only way to instigate nationwide economic growth.

According to all three panel members, increasing the budget can help solve these issues of physical obstacles for students, while training for teaching staff, hiring new personnel in the education sector and amending textbooks were also recommended. The panel believe that these actions would have a direct and positive impact on this issue, not least by gradually increasing the level of quality of education.K