United in the struggle for basic rights - Kosovo 2.0
In-depth

United in the struggle for basic rights

The right to abortion is being slowly cut off.

In May, Mirela Čavajda, a 39-year-old mother of one from Zagreb was informed in her 24th week of pregnancy that the fetus she was carrying had a malignant tumor. It was unlikely Čavajda would survive giving birth and likely that the baby would be born with severe deformities. Four hospitals in Zagreb turned down Čavajda’s request to terminate her pregnancy, insisting that it was out of their hands and that abortion is illegal in Croatia after the tenth week of pregnancy.

The doctors ignored the fact that abortion is allowed by law after the tenth week if there are medical indications that “the child would be born with serious congenital physical or mental defects,” which was the case with Čavajda.

Čavajda eventually went to Slovenia, where a medical board gave her the go-ahead to terminate her pregnancy.

Although this is not the only case where Croatian doctors have refused to carry out an abortion, Čavajda’s struggle led to mass protests in May in cities all across Croatia. In July, Čavajda was given the Nada Dimić Award for promoting social liberties.

The situation in Croatia is just the starting point in this tour of the struggle for abortion rights across the region, where feminists have been organizing and fighting against impediments and hurdles to accessing abortions.

Legality does not ensure availability

Another case involved the patient M., a young woman who told her story to the Croatian newspaper 24 sata, including the full documentation supporting her story.

In her sixth week of pregnancy, M. went to the medical center in Osijek to have an abortion. A few weeks after the procedure, at a regular check-up with her gynecologist, M. found out that she was still pregnant. She went back to the medical center in Osijek, where they told her that the abortion was not carried out because of an alleged infection.

When she requested to have an abortion again, she was told that it would not be possible because the legal deadline for abortion had already passed. It is legal to terminate a pregnancy upon request only within the first ten weeks. Like Čavajda, M. was forced to go abroad. She had her pregnancy terminated in the Netherlands, at her own expense.

Croatian Minister of Health Vili Beroš responded to these cases in a similar manner to previous warnings about the unavailibility of abortions in Croatia; he avoided mentioning any kind of serious regulation or restructuring of hospital staffs and boards that would ensure the legal right to abortion was fully realized. Headed by the Green-Left Coalition, liberal and left-wing parties responded by putting forward a motion, the second time they’ve done so, to dismiss Beroš because of the situation in his sector.

Elizabeta Matković from the Zagreb-based fAKTIV collective said that even though it is legal there is often no access to abortion in Croatia. Photo: Luka Pešun.

“Just because abortion is legal in Croatia, it doesn’t mean it’s available,” a member of the fAKTIV feminist collective Elizabeta Matković said. She added that abortion is not free. Prices range from 1,500 to 4,000 kunas (200 to 550 euros) at different hospitals. “On top of that, around 60% of gynecologists rely on conscientious objections, so you often can’t get an abortion even if you do have money,” Matković said.

She noted that it is not just gynecologists who invoke conscientious objections. Nurses and anesthesiologists do so too at times, so there have been cases where abortions were performed without anesthesia.

“In some hospitals, such as the one in Knin, when you call them and ask about abortion, they mention God and the right to life, noting that your fetus — which they call ‘your child’ — may become a great leader or bishop someday. We are continuously denied access to healthcare, which poses a risk to our health and lives,” Matković said.

Since 2016, the fAKTIV collective has been organizing large nighttime marches in Zagreb for March 8, International Women’s Day, as part of their activism promoting reproductive health and the right to abortion. Matković said that they are seeking answers from hospitals where there is no gynecologist on staff willing to perform abortions due to their claiming conscientious objector status. Since one of these hospitals, Clinical Hospital “Sveti Duh,” was founded by the city of Zagreb, fAKTIV also seeks answers from the government, and expects them to ensure the availability of abortion in hospitals authorized to provide this service.

Activists from fAKTIV work to expand the discussion on abortion and bring attention to the social context where this right is not enjoyed by raising the issue of labor violations and other economic factors that influence access to abortion.

“At every night march of ours we repeat that abortion has to be legal and free. It mustn’t depend on a doctor’s careerism or a worker’s account balance,” Matković said. “Tens of thousands of people support our demands. We have been marching, going to the press and waving banners outside hospitals. We’ll continue to fight. We won’t let them abolish and trample on a right that women fought a long fierce battle over,” Matković said, adding that one of their goals is to re-enshrine the right to abortion in the constitution, from which it was removed in the 1990s.

Croatian activists have been organizing protest marches for years, demanding that fundamental rights be respected — including the right to abortion: Photo: Lara Varat.

In 1974, Yugoslavia became one of the very first European countries to constitutionally protect the right to abortion. After declaring independence from Yugoslavia, Slovenia kept this right in its constitution. Tina Tomšič, an activist from the Ljubljana-based organization Inštitut 8. Marec, explained that abortion in Slovenia is safe and covered by universal healthcare.

Although there has been no cause for protests in Slovenia recently about violations of abortion rights, there is always room for improvement, said Tomšič adding that according to a recent public opinion poll conducted by the public opinion research agency Valicon, more than 80% of people support the right to abortion in Slovenia.

“There’s still room for improvement,” Tomšič insisted. “In Slovenia, a person can terminate their pregnancy without a medical board assessment up to the tenth week. Afterwards, a person who wants to have an abortion is required to face a separate medical board that either grants or denies access to abortion up to the 13th week of their pregnancy. This is not ideal; we believe that abortion should be available to everyone up to the 13th week of pregnancy, as is stipulated by law in most European countries.”

Last year, Inštitut 8. Marec released a publication about Slovenian politicians’ opinions about the right to abortion. It showed that right-wing parties believe that the road to abortion should be more dififcult. They rationalize this with the standard conservative explanation that “life begins at conception and it should be protected”.

“We believe that this is not too alarming at the moment, but if their ‘pro-life protests’ start gaining steam, the right to abortion might become a right that is questioned, rather than a given one,” Tomšič said.

Behind every step forward is years of work

Feminists from Montenegro have recently been urging caution, saying that “the Croatian scenario” will not be such a remote prospect if the church continues strengthening its influence in society.

RTCG, the Montenegrin public broadcasting service, recently produced a TV debate on abortion in which one of the participants was Gojko Perović, a Serbian Orthodox Church archpriest and the parish priest of Podgorica. This sparked a protest held outside the RTCG premises, where protesters said that they would not let “the levers of the church control people’s bodies and fates.”

Activists in North Macedonia are also closely following the developments in Croatia. North Macedonia has a legal framework that works in favor of women’s reproductive health, regulating free, safe and legal access to abortion. 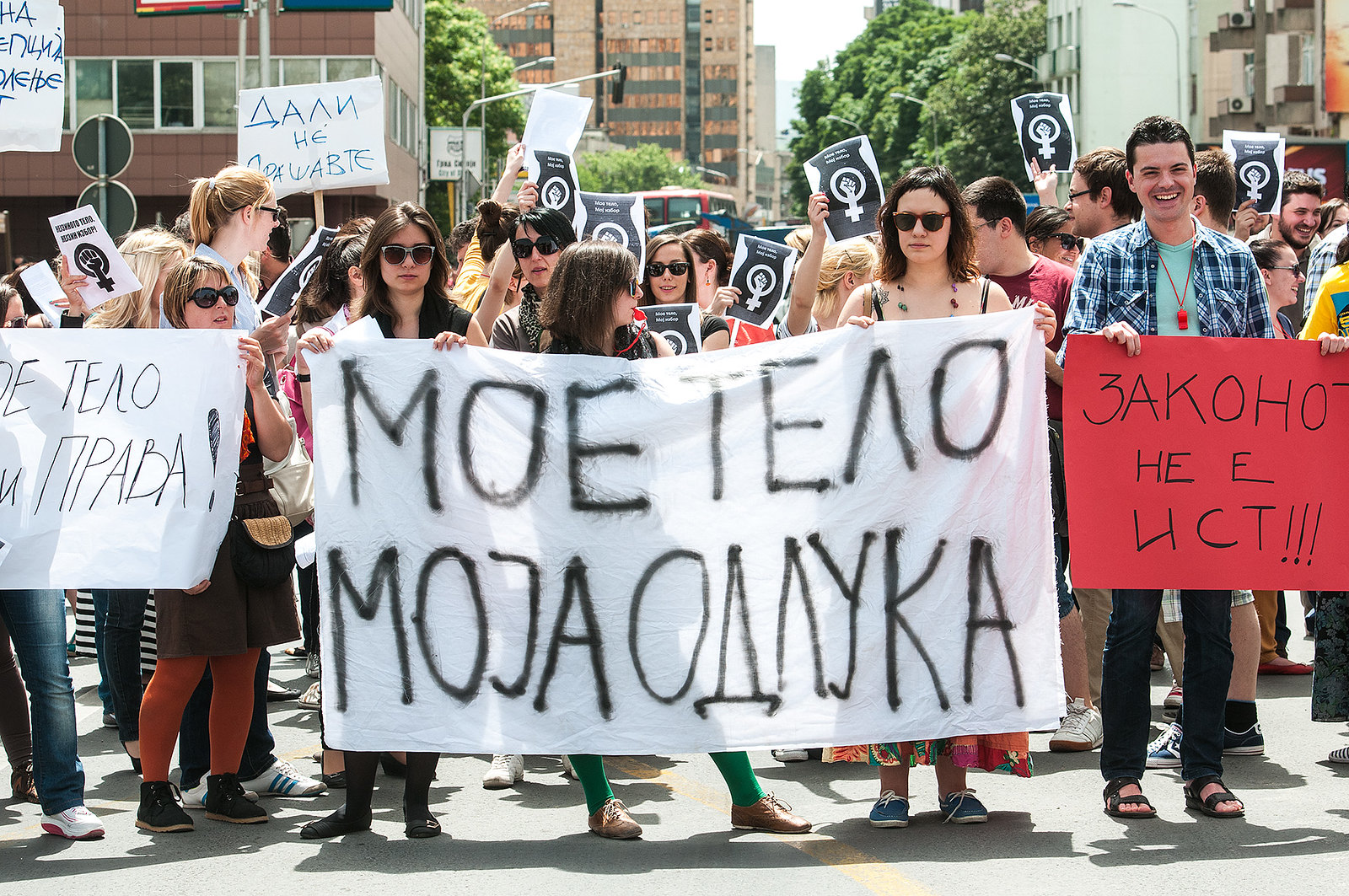 North Macedonia saw a restrictive law on abortion get amended under mounting pressure from the public. Photo: Vančo Džambaski.

“In 2019, the government adopted a new law on abortion, which replaced the previous restrictive one passed in 2013,” Jana Kocevska explained. Kocevska is a member of the Tiiiit! Inc. feminist association and co-founded the festival PRVO PA ŽENSKO.

However, Kocevska noted that the current law, which she thinks is much better, came as a result of long-standing activist efforts.

“The restrictive law on abortion was passed in 2013, in the middle of summer, when Skopje is effectively a ghost town — not even a month after the draft was submitted,” she said, adding that the then ruling conservative party seized the summer to pass the law quickly, without any public discussions or consultations with experts.

“The civil society sector for women’s rights immediately organized protests in front of the assembly, speaking out against the restrictive amendments that curbed access to abortion. After the protests, many initiatives were formed, so people joined forces and mobilized; this gave rise to MATKA — a platform promoting the right to safe and legal abortion, which was launched by nine organizations,” Kocevska said.

Activist campaigns ensued. There were persistent and intense discussions on how the law had a negative impact, especially on women from marginalized communities. Kocevska recalled that activists were publishing educational materials, filming videos and making public appearances in the few media outlets that were open for cooperation back then. All of this led to a new law being passed in 2019, two years after a government reshuffle.

For abortion rights activists, the current situation in Croatia looks grim and many women are preparing to continue the struggle for their rights. Recent news from the United States, where the Supreme Court overturned Roe v. Wade, the 1973 case that granted women the right to abortion, seems to confirm fears that abortion can always be taken away.