A violent year for Kosovo’s journalists

More attacks and less freedom in 2017.

“It’s nothing new to say that we are not satisfied with the Kosovo justice system, which is negligent in these cases,” explains Parim Olluri, the executive director of the online newspaper Insajderi, who was physically attacked this summer. Olluri was assaulted by three people on Aug. 16, who remain unidentified to the police ― despite the fact that photos of the assailants were made public three weeks ago. The investigation is ongoing.

The attack on Olluri also caught international attention with Reporters Without Borders condemning the assault on the journalist, while asking the authorities to “shed all possible light on the attack.”

“It is a case that if the prosecution and police got engaged in seriously, it could easily be solved. But in the circumstances of Kosovo, this negligence looks normal,” says Olluri, who is sceptical that his attackers will be brought to justice. “The fact that as a victim it is my duty to send emails and letters asking about the case, gives me the impression that the case might have been forgotten about.”

Petrit Collaku, a researcher at the Association of Journalists of Kosovo (AJK) echoes Olluri’s claim, though he believes that there has been some progress made in recording the crimes. “Something has changed for good, institutions have a center for the database and all cases are being registered,” he tells K2.0. However, Collaku believes that impunity remains the elephant in the room.

Pressure, threats and attacks on journalists have been frequent in recent years. Last year, the courtyard of the state broadcaster Radio Television of Kosovo (RTK) was also attacked with a hand grenade. Days later another bomb exploded at the house of the head of RTK, Mentor Shala. In both cases only material damages were caused, however it was a sign of a direct threat on journalists’ work. Although more than a year has passed, no one has been brought before justice.

Collaku was the author of the recently released AJK report “Media Freedom and Journalists Safety,” which revealed that from January up to Nov. 20, the date the report was released, 24 cases of threats and attacks on journalists have been registered. This is already a substantial increase on the 18 cases that were reported to the police and prosecution during 2016.* 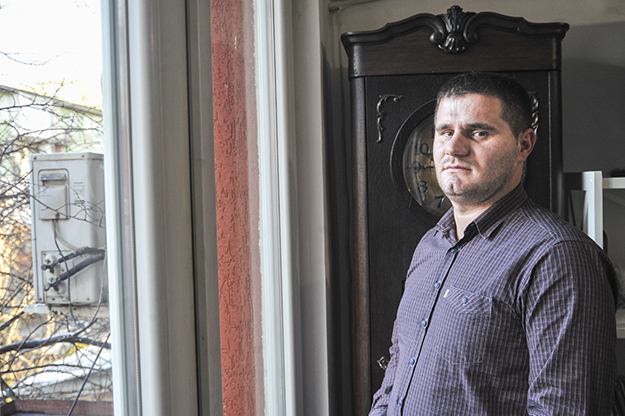 Parim Olluri of Insajderi, who was attacked this summer, believes the punishments handed out to those who have been convicted of attacks on journalists have been “ridiculous.” Photo: Atdhe Mulla / K2.0.

Ollurri’s colleague, and the editor-in-chief of Insajderi, Vehbi Kajtazi was also attacked in October. After a month of being held in custody, Fitim Thaci, Kajtazi’s assailant was released with four months probation. For Olluri, such instances of “ridiculous” punishments are just providing further motivation that can induce more attacks towards journalists.

“Who is inciting the attackers? I think it is the Kosovo judicial system in fact,” he tells K2.0. “People who were exposed in the media as attackers of journalists have not been been given big punishments, but ridiculous punishments. Now, logically any ‘shady’ businessman that has has avoided tax or who benefits from public tenders, will find it very easy to pay a person 500 to 1,000 euros to attack any journalists reporting on it — because the punishment is either a month of custody or some other ridiculous punishment.”

The trend of journalists being attacked has continued deep into the year. On Nov. 11, Taulant Osmani, a kallxo.com journalist, was attacked by a group of people in Gjilan, who attempted to grab his phone while he was following a discussion between two groups of people in a city square in Gjilan. The journalist was fortunately protected by bystanders and was uninjured by the attackers.

Another issue is that processing the attacks through the courts sometimes takes years. “The court fined a former official of the Ministry of Trade [and Industry] 500 euros after the journalist Liridon Llapashtica sued him for defamation. The case was concluded last year while the case dates from 2014,” reveals Collaku.

The state of affairs of the judicial system has led to Kosovo’s media landscape being depicted as “partly free” in the 2016 Freedom House report, which measures freedom of expression in the media. Kosovo scored 14 points, with 30 points being the worst.

Why have attacks increased?

The global climate of the media has worsened. According to an Article 19 Freedom of Expression report released on Nov. 30, the media worldwide has plunged to its worst levels since 2000. In Kosovo in recent years, the environment for journalists has also been strained. For Olluri, one of the main reasons that journalists are being attacked is because of the evolution of the media landscape.

“While 10 years ago there were 2 or 3 newspapers and two television channels, it was easier for powerful people to influence their editorial policies ― so they would not upset political and para-political forces ― and now we have many online media,” he says.

For Collaku, the boom in online media also created cases where journalists failed to fulfill their duty of informing fairly and impartially. “With journalists that we have spoken to, we were told that the code of ethics have been fully violated in many cases.”

Collaku thinks that the political circumstances in the country have resulted in an increase in the pressure on the media. “Two deputies serving in this legislature have sent threatening messages ― AAK deputy Beke Berisha threatening the life of Vehbi Kajtazi and another deputy, Milaim Zeka, used the podium to put down journalists,” he says.

In October, NISMA deputy Milaim Zeka during a session attacked KTV journalist Adriatik Kelmendi and Insajderi’s Vehbi Kajtazi, causing the AJK to make a statement on the improper language used by Zeka, who himself was a journalist before he joined politics in 2016.

Zeka attacked Kelmendi by publicly stating that his father had served the oppressive regime while working as prosecutor, and punished Kosovo Albanians before the 1999 war. His party colleagues remained silent when he was giving the speech and did not distance themselves from this use of language.

Prime minister Ramush Haradinaj himself has also found himself in an antagonistic relationship with journalists. In his 10 first days in office, when asked in a press conference about the position of U.S. regarding the border border demarcation issue with Montenegro, Haradinaj replied: “I have respect for the media but the vast majority of you either do not know to read English or you don’t understand what they said,” before asking all journalists to “go back to school to learn English.” 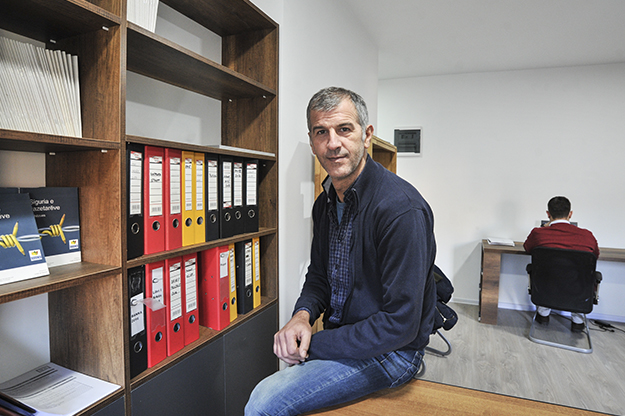 Petrit Collaku of the Association of Journalists of Kosovo believes that politicians need to be more vocal on all attacks, not just those on high profile journalists. Photo: Atdhe Mulla / K2.0.

Haradinaj later apologized, but statements like these can be seen to undercut his position when he condemns attacks on journalists. After Vehbi Kajtazi was attacked, Haradinaj proclaimed that “we really condemn the physical attack, not just on Kajtazi but on all journalists. As a government we pledge to have a positive relationship with the media, and to be transparent and ensure freedom of speech.”

Despite the fact that Collaku hails condemnation for attacks on journalists, he thinks that double standards are applied even in these reactions, and calls on political leaders to be vocal also when members of the media who are less well known get attacked. “There are no reactions when it is a not well known journalist or when a cameraman’s camera gets smashed,” Collaku says.

“There are more and more journalists being beaten,” Collaku says. “There are individuals being beaten for telling society ‘hey, this wrongdoing is happening.’ We should ask why the institutions have not been more effective, providing justice and giving more attention to these attacks.”

*Editor’s note: This article has been amended as the originally published version implied that attacks on journalists had increased since 2012, whereas the number of attacks reported in 2017 is currently the same as the total number reported in 2012.

This article was written by Kosovo 2.0 as part of the European Centre for Press and Media Freedom (ECPMF) project, co-funded by the European Commission. K2.0 is an ECPMF project partner. The contents of this publication are the sole responsibility of the project and can in no way be taken to reflect the views of the European Union.