Waiting at work for Independence Day

Just like any other day, Gëzim Kryeziu woke up at 7 a.m. and got ready for work. He put on his pants, ironed his white shirt and checked if his shoes needed cleaning — before that, he shaved his beard.

This has been Gëzim’s morning routine before going to work as a waiter for the past 20 years. “It suits waiters to be clean-shaven everyday,” he says.

Although it was just like any other morning, this was a special day. First of all, he had worked until 3 or 4 a.m. the night before, and woke up after only three hours sleep. After getting ready, he drank some coffee, smoked a couple of red Luckies and chatted with his wife, telling her that in all likelihood he would be at work all day today as well.

Despite it not being a regular day, Gëzim followed his routine. He went up to his childrens’ rooms, hugged them, and as he was saying goodbye, he called the taxi driver that took him to work every day. The taxi driver was not as late as he often was, and their conversation was far from usual.

“Things are moving today. It seems they’re going to declare it,” the taxi driver said to Gëzim, who agreed.

Before the clock hit nine, Gëzim had arrived at Basilico restaurant, which was situated across the street from the old cinema, Kino ABC. He met some of his colleagues who were waiting outside the restaurant for the manager to come and open it as usual. The chef, Ilmi, told Gëzim: “I congratulated you last night. I’m not doing it again.”

Amid the ruckus of people congratulating each other without yet hearing or reading anything official, the manager arrived and everyone went inside. The tables were set and decorated. They were waiting for customers. 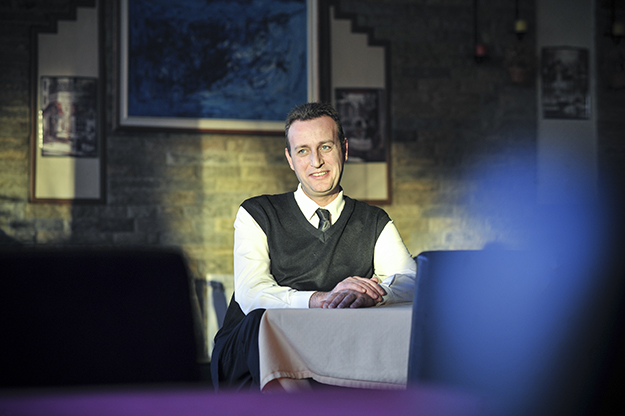 Not long after, one of the regulars came in. To Gëzim’s surprise, he ordered an espresso and a glass of homemade raki. He didn’t usually drink alcohol, typically sticking to coffee during breakfast time, but he told Gëzim: “I’m taking a break from the routine today.”

As Gëzim was starting his working day, Valdete Osmani was deep into her fourth working hour. At 5 a.m. that morning, she was waiting in the parking lot of her workplace, about to go off to report on the day’s events.

The day before, the Kohavision journalist had been assigned to report on the municipality of Drenas. She met with her driver and cameraman, Semi and Arben, and set off for the town that shares the municipality’s name. They reached their destination, 32 kilometers away, in around 30 minutes.

As they entered the center of Drenas, they saw a flag that had been placed on one of the buildings. It caught Valdete’s attention — a blue flag, at the heart of which lay an outline of the map of Kosovo, above which were six white stars. She told the cameraman to record it, so that she could send it to the editorial team later. It seems as though Drenas was honored with the state flag, even before it was made official in the Kosovo Assembly.

Leaving the flag behind, Valdete continued to roam the streets of Drenas. She was going to meet a family with whom she would watch the extraordinary session being held at the Kosovo Assembly later that day. The family, who had been suggested to Valdete by a few people, invited her to their home.

After coordinating everything, Valdete was feeling more relaxed as she entered a café with her two colleagues to observe the prevailing mood. Upon entering, she noticed that she was the only woman. For her, it was a strange but funny situation.

While Valdete was feeling more relaxed, Baki Jashari, the conductor and director of Kosovo’s Philharmonic, was in a completely different mood. He and the 120 other members of the Philharmonic had gathered at 10 a.m. at 1 Tetori Hall in Prishtina, where they were waiting to start their final rehearsal session.

But things were not going as planned. The temperature in the hall was below freezing, making it impossible for them to rehearse. Baki was not only worried about the rehearsals, his biggest concern was the concert, which was due to be held at 7 p.m..

The lack of responsibility shown by the organizers of the concert had aggravated Baki. He knew that it was impossible to play instruments and sing in those conditions, so he told his colleagues that they were free to go home.

This elicited a reaction from the officials who were responsible for the technical preparation of the day’s activities. Baki responded by saying that they would not even think about rehearsing — let alone holding a concert — in such a cold hall. 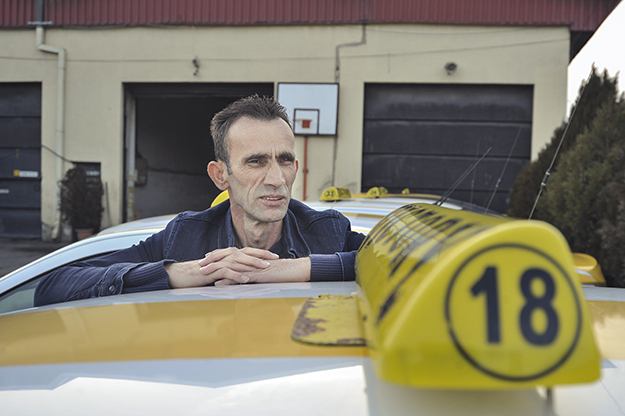 At the time Baki was arguing with state officials, Fadil Haxholli was together with his relatives at his family home in the Hajvalia neighborhood of Prishtina. The TV was the center of attention, as the family were following all the latest developments. Besides news on political events, Fadil was also waiting to learn from his employers about whether or not he would need to show up for work that day.

Fadil worked as a taxi driver. Every month, he would work on one Sunday, and have a day off the next Sunday. This Sunday, it was his turn to work. He usually started his afternoon shift at 2 p.m., but on that day, he went to work a few hours earlier.

Valton Beqiri — a consultant to the Minister of Culture, Youth and Sport, Skender Hyseni — was the first state official to contact the Philharmonic. In an unofficial conversation, he spoke to Baki and told him that including the Philharmonic was foreseen in the protocol. They discussed the program that was to be played and agreed to make it comprehensive, in keeping with Kosovo’s soon to be declared independence.

They included Giuseppe Verdi’s “Prisoners’ Choir,” Beethoven’s “Ode to Joy” and Dvorak’s “New World.” But Beqiri did not disclose the day on which the concert would be held, as it would imply the day of the declaration of independence. 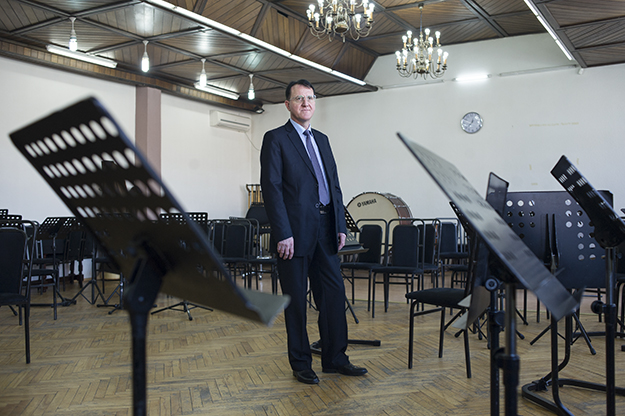 Baki was informed about the exact time and date of the concert on February 16, through an anonymous phone call. The person on the other end said: “I am the person who has been assigned to inform you that the independence concert will be held tomorrow at 7 p.m..” Baki notified his colleagues that the final rehearsals, which were scheduled for the next day at 10 p.m., were going to be held at a different location: 1 Tetori Hall.

Gëzim Kryeziu had a similar advance warning. One of his regular customers, whom he served every day, was a high ranking government official. Gëzim was curious to know whether independence would be declared on Sunday, so he asked the politician. With a smile on his face, he briefly replied: “Kismet.”

It seemed that the gossip and expectations of the week were coming to an end — at least for Gëzim, who received confirmation from a politician that February 17 was set for something special.

Valdete Osmani felt that the quietude that characterized those days was senseless. To this day, she cannot understand the haziness that surrounded the declaration, which had become more or less a public secret.

After visiting the cafés, Valdete headed towards Terstenik, a village in the municipality of Drenas, where she would spend time with the Dvorani family. Upon entering the family home, a series of pictures of five young men caught her attention. They were all killed during the war. The youngest was 19, and the oldest only 27.

The joy and ecstasy that prevailed in the streets was not felt by the Dvorani family. They were still in mourning. The family decided not to leave their home, but to follow events on TV instead. It was as if they wanted to be close to their five sons during those moments, although now only their pictures were there. 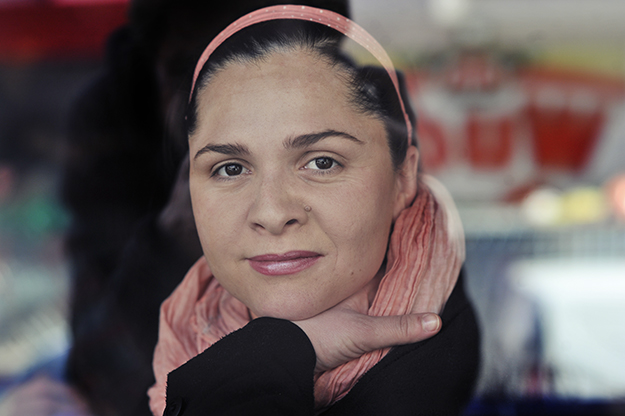 Baki Jashari was in a completely different situation. Around 2 p.m. he received a call informing him that the 1 Tetori hall was heated and that the Philharmonic would now be able to rehearse and hold the concert without any issues. Relieved, he notified his colleagues, and they decided to hold the final rehearsals and conduct the sound check at 4 p.m..

Back at the restaurant where Gëzim Kryeziu was putting in a day’s work, people had started to celebrate. Traditional music was being played, and the amount of alcohol served was higher than any other day.

“Gëzim [which translates as ‘Joy’ in English], you are also part of this joy,” one of the customers told him, as he invited him to sit at their table.

He had been so determined to tend to his guests that he had not managed to eat lunch: “Just a bit to keep me going.”

While Gëzim was serving raki to customers and relishing the sounds of music, Fadil Haxholli had just arrived at his workplace, where he was waiting to get into his cab and go out onto the capital’s streets.

The hour of history

At ten past three in the afternoon, the Kosovo Assembly started the extraordinary session. At Basilico, the music stopped and all eyes were on the TV. There was almost absolute silence. As Gëzim puts it: “Besides the politicians, the only thing you could hear was buzzing flies.”

Baki was also watching the session, at his family home. Fadil had parked his taxi by the fountain in the Ulpiana neighborhood and was listening to the session on the radio.

The Dvorani house was also silent, all eyes were on the TV. Valdete joined the family in this experience, one of both sadness and hope. The moment that the final sentence of the Declaration of Kosovo’s Independence was read was unforgettable to her. At that moment, Emine Dvorani started to cry. Her husband Idrizi sighed.

Valdete dared not stand up and congratulate anyone. The first to break the ice and say something with a shaky voice was Idrizi, who congratulated everyone. He shed the first tears of the day when he hugged his now only child, to whom he wished the best for the future.K

Back to Kosovo X Monograph