What shapes the opinion of those born after 1999.

When I was asked to write about how young people see the dialogue process between Kosovo and Serbia, I wasn’t expecting it to be so difficult. I have friends from both countries and we all agree that the dialogue is never a topic of conversation when we first meet people from the other country.

I guess we feel as if we risk having an awkward situation by bringing up politics. So, instead, what we do to kind of break the ice is try to avoid any historical or political question, pretending we do not even think of it and try to have a smooth conversation about sports, art or anything not directly related to geopolitics.

Even though the dialogue is a topic that concerns everyone and is relevant to active citizens that like to be politically informed, we still tend to skip the political aspects and first try to find common topics of interest before forming trusting friendships. This could be because of unpleasant past experiences, or fear of one another based on what we were told about the other nation. Despite the fact that we were born after the war, almost all of us were raised in an environment full of hatred toward the other.

Nevertheless, I consider that I am now past the ice-breaking point with some of my friends, so  before starting to write the article, I opened up the topic and I invited them to help me broaden my thoughts on how young people see the dialogue. In our talks I was able to see that we have many similarities in our viewpoints about the dialogue, although with some differences.

First, young people in both Kosovo and in Serbia seem to agree that the youth, in general, are not very interested in the process, albeit for different reasons. A rather depressing realization from my conversations is how young people seem to portray the dialogue as a process imposed externally, rather than something we really need and that should come naturally, since, you know, we had a war!

The feeling that dialogue is externally imposed leads many to think that it has no role in building a peaceful future, but is rather something that a third party wants us to complete. In other words, we might behave cordially for the sake of the European Union when in reality we continue to harbor resentment mixed with abundant doses of xenophobia. In this sense, I’m concerned that the expectation that young people in Kosovo and Serbia are somehow more open, moderate, progressive and ready to engage with each other may be sometimes misleading.

The stagnation of the process has not helped either. We can see that, even though the dialogue is frequently in the media, it has been extremely slow and has faced serious setbacks. These serve to spread a wave of pessimism among the youth, which is concerning, considering that most of them are not sure where they stand on the issues.

This is another striking realization from my conversations, how often we seem to fall into the trap of becoming echo chambers for the talking points of the political elites. We often see ourselves carrying their messages and rarely bother to think critically about what we are told.

We, the young people, should be able to think in more progressive and radical terms about the necessity of peace. Maybe I sound naïve, but that is only because in our region, those defending liberal democracy and positive peace are seen as idealistic and detached from reality.

Another reason why young people seem to be not interested in the dialogue is that they often are misinformed, sometimes even intentionally. The dialogue is widely seen as a hard-to-understand, top-down process done by and for politicians. 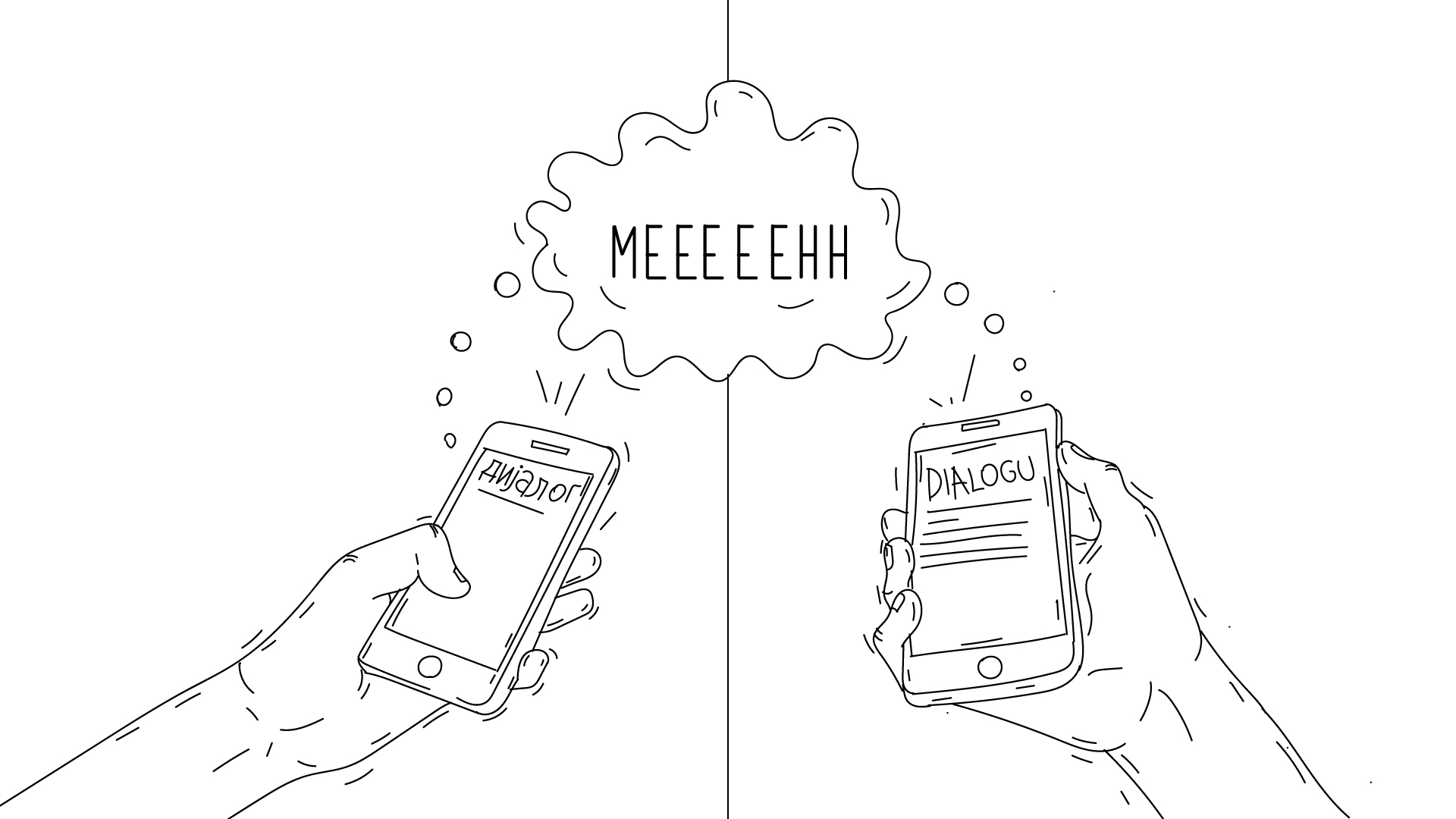 Transparency is also a problem. Agreements are always reached behind closed doors, with the public lacking any context. That, and the fact that decisions are kept tightly sealed, leaves the process vulnerable to misinterpretation and mischaracterization.

That is even more relevant when considering the amount of misinformation regarding the other side and historic events. We can all agree that the narratives used for one another are highly disturbing. To me, it is very interesting seeing how the generations born after the war still harbor that level of hate.

During my talks, it was mentioned that we cannot really talk publicly in a positive way for the other party without being considered unpatriotic or traitors to our society. For example, a friend I met during a youth camp told me how whenever he calls for peace or cooperation between the two countries he automatically receives a patriotic history lesson.

Young people tend to be surrounded by a very toxic environment constantly filling them with negative narratives about the other party. You just need to see what happened recently with the Serbian model that had to abandon a beauty contest after taking some controversial pictures with her Albanian competitors.

This environment begins with families and continues in schools and universities. That is why even our generation, born after the war, is replicating that hatred toward the other; we are caught in a vortex of negative, even extremist, narratives, and we don’t hear anything else.

Even if someone manages to escape this vortex coming from family, school and friends, the possibility of receiving misinformation online is very high. I am currently working on a project to map extremist disinformation online in which I am looking for sources of disinformation and studying their potential target groups to identify those susceptible to radicalization.

During the research I am exposed every day to a disturbing and alarming trend of hateful posts and I see it growing, especially coinciding with more tense political events. These posts contain the most repulsive words and incitements to hatred and violence. Often they are downright racist, not leaving any space for reconciliation and dealing with the past. What strikes me the most is that no one seems to be dealing with this as a form of racism.

A Game of Elites

Another point where my friends and I could find common ground during our discussions was when talking about political elites. In my Serbian friends’ perspective, the political elite is one of the main problems in the dialogue, while my Kosovar friends are seemingly more supportive of the current elite.

My friends in Serbia think their elite tends to use the dialogue to distract from political scandals and internal problems that might hurt them on a national level. They also play a negative role when they present aspects of the dialogue to people, only expressing publicly what the voters like to hear. This brings us again to the first problem I raised, disinformation. On this note, they also refuse to tackle the dialogue in a reconciliatory manner and this rhetoric is damaging to the dialogue process itself, as well as to the idea of reconciliation in the eyes of young people.

In Kosovo, the current elite has strong support from the youth and a very likeable leadership. Consequently, certain sectors of younger people tend to agree almost blindly with every decision they make in every process, including the dialogue. The same goes when they dislike the elite, as we have seen in the past. The level of criticism is not very related to any specific decision as much as it is to the person that is making it.

However, these differences aside, I realized that my friends from both sides could agree that the elites never encourage the youth to see the benefits of dialogue or even engage in the reconciliation process. It is only civil society and international organizations that offer such chances through different events, and then the amount of people involved in them is very small compared to the young population that both countries have.

These programs help us to understand each other better, get out of our comfort zone and challenge thoughts and mentalities. Hence, these exchanges and programs help participants see the benefits of dialogue the elites have never advertised as they should. The idea consists of simply providing a forum where young people can meet, share their opinions, learn to embrace their similarities and allow space for developing new perspectives. Most of these programs include different forms of art as a way to find a common language to express common interests and serve as a starting point for cooperation.

To conclude, I got a whole new perspective to look at the dialogue and its benefits from these conversations. As someone who lives close to the Kosovar border told me, “A peaceful and calm environment where we are not scared of small political events disturbing the peace would be highly beneficial for our mental health.”

This is something we often do not think about or even consider when we discuss the dialogue: How significant the process is for our mental health as a society. I am sure that our mental health is affected every time some small peace disturbing event occurs and stirs the fear that it might lead to something bigger.

This Blog was written for the New Social Initiative within their Kosovo Collective Op-Ed series and published on K2.0 by agreement.