In September 2020, the Guardian editorial board had GPT-3, artificial intelligence (AI) language software, draft an essay about how robots “come in peace” and that humans have no reason to fear them. The result was incredibly successful; GPT-3 delivered a roughly 1,000 word text that put forward some good arguments.

If an AI program were to be trained for a journalism job in Serbian, an optimal assignment would be set up differently. Instead of robots coming in peace, the software should write a text about Albanians who come to make war. There are several reasons why this, in a technical sense, would be an ideal assignment.

First, a large corpus of pieces on the matter has been building for years, so the software could extract the existing elements and combine them and retell the story. Second, the lexical range of such pieces is very narrow. The software would not need to struggle with a large number of words; common phrases, figures of speech and insults would suffice. Third, and perhaps most importantly, these media pieces are very predictable and follow a template, structured like a fairy tale. An algorithm would be able to recognize and learn the ropes of this mechanism very easily, and then independently produce front-page pieces for Serbian tabloids like Informer, Alo, Srpski Telegraf and others.

If we look at how Serbian tabloids reported on the crisis in the north of Kosovo on July 31, we’ll see this sort of thing. It’s a long-running approach to reporting: a study from 2016-2017 found that Informer and Srpski Telegraf’s front pages announced the outbreak of a total of 265 wars in a single year. In other words, five announcements of war per week with a symbolic “weekend” bringing respite from “nuclear strikes,” “terrorist attacks,” “Greater Albanian aggression,” “total assaults,” “head-on clashes,” “bloody massacres,” and so on.

How does all this affect the audience? We can think about it in two opposing ways. The first is that, owing to the long-term exposure to threats that fail to be carried out, big words are beginning to lose power, so readers become anesthetized and read about upcoming invented wars as they do about an earthquake in East Timor. At the same time, we may have a public readership that is turning militant, scared, a public that is living in constant alarm about armed conflicts. 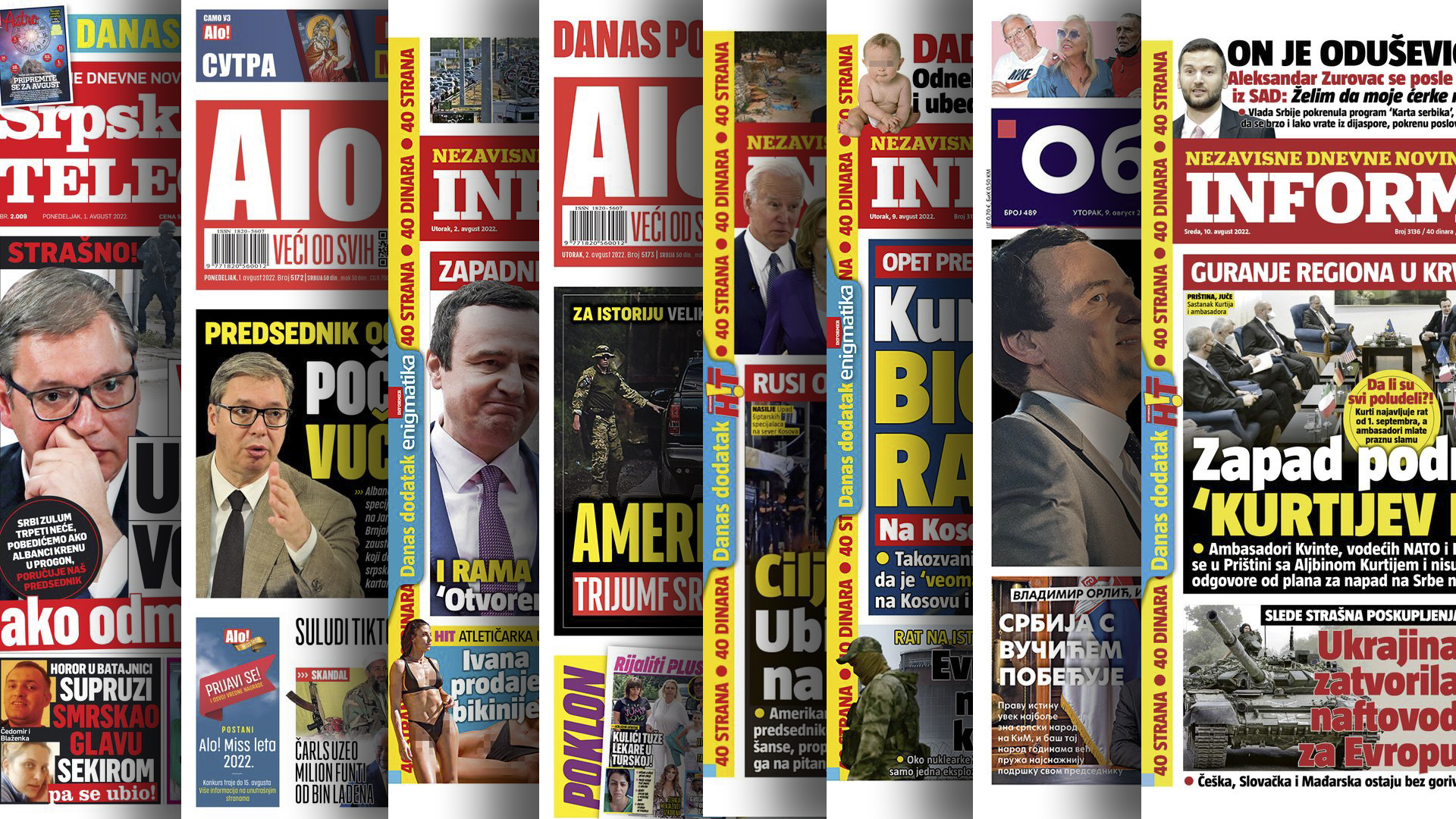 A study from 2016-2017 found that Informer and Srpski Telegraf’s front pages announced the outbreak of a total of 265 wars in a single year. Photo: K2.0.

Since Albin Kurti came into power, tabloid articles about new conflicts breaking out in Kosovo have intensified. In February 2020, an Informer headline read: “Madness in Prishtina: Kurti is preparing for war.” The corresponding article claimed that “the newly elected president of the government of the fake state Kosovo is openly preparing for a war with Serbs and Serbia.” The most widely circulated Serbian newspaper spoke in this way in reference to Kurti’s inaugural address, where he in no way, shape or form announced a war, neither with Serbs, nor with Serbia or with any other country.

One of the narrative devices these stories rely on is sudden claims of victorious conversion and treasonous betrayal. Thus you get things like Informer’s owner renting out a billboard to put up the message “Trump, you Serb,” followed by the newspaper’s reassurances that Donald Trump would return Kosovo to Serbia. But shortly after, when Trump met with Kadri Veseli, the former U.S. President abruptly changed national identities on Informer’s front page: “Trump is a Šiptar!” In a similar manner, in early August local tabloids celebrated “Serbia’s diplomatic victory.” Supposedly the U.S. and Albania took Serbia’s side (Alo: “Vučić turned the U.S. against the Šiptars,” and Kurir: “Albanian Prime Minister Edi Rama had clear message for Prishtina — Open Balkan or war”).

Tabloid pieces are characterized by an absence of any truthful analysis. There is no cause or effect, background or insight; everything boils down to emotions, primarily anger and fear. In such pieces, the insulting slur “Šiptar” is no longer only for Albanians, it becomes a universal label for anyone working “against Serb interests.” So besides Donald Trump, leaders of EU countries, activists or journalists from Serbia and opposition politicians all get labeled as “Šiptars.”

The Informer front page on August 3 read: “Objective of the West: Kill Vučić in Kosovo.”

When working out the angle of a story, first the stance of Serbian President Aleksandar Vučić is determined. And that stance — regardless of whether it’s offensive or defensive, right-leaning or left — is presented as the saving grace, protective, deliberate and wise. Once oriented thusly, the rest of the story is crafted so that narrative, factual and stylistic context aligns with the pattern set by the president.

But that doesn’t mean that the media discourse stays where Vučić sets it. On the contrary, tabloid discourse is always more intense, heated and explicit. Within this system of information circulation, every story is heard twice: first in press conferences held in the presidency and later in media, where it is retold and enhanced. The experience of reading about crises in Kosovo has taught us that it’s only a matter of time before a story about Kosovo Serbs becomes a story about the president. And we didn’t have to wait long this time. The Informer front page on August 3 read: “Objective of the West: Kill Vučić in Kosovo.”

A 2021 report from the OSCE about the rights of non-Albanian communities in Kosovo states that although ethnic tensions have settled over the last decade, ethnically-motivated incidents targeting Serbs or the physical markers of Serbian language or culture are still regular occurrences. The most frequent instances are petty thefts and property damage, hateful graffiti, and the vandalization of Serbian Orthodox cemeteries. With this in the background, the tabloid headlines and narratives only heighten tensions further.

So it’s clear that articles about “hell in Kosovo” and “Serbia’s diplomatic victories” cannot be read in the same light by a Serb from Sremska Mitrovica and a Serb from North Mitrovica in Kosovo. Couple all this with air raid sirens, barricades and the sound of bullets and one thing becomes clear: this is the perfect timing for fear-mongering.

Though the tabloids present themselves as “standing with the people,” it’s clear that they feed themselves on this fear-mongering, that they cultivate it and make money from it. This form of pleasure is described in “Crime and Punishment,” when the half-dead colonel Marmeladov is carried into his apartment, while his neighbors, in Dostoevsky’s words, “pushed their way back towards the door, with that strange feeling of satisfaction which is always observed in people even when a sudden misfortune befalls those who are closest to them.” There is a German word for pleasure stemming from trouble: Schadenfreude.

If a Serbian variant of the GPT-3 software were tasked with writing an announcement about the coming “war in Kosovo,” it would probably, on the basis of simple instructions, create a text that no Serbian tabloid journalist would be ashamed of. The only difference would be that the software, unlike a journalist, wouldn’t feel that sudden surge of satisfaction as it announced an apocalypse.

Why do I see this disclaimer?