Premium collection set to begin despite lack of public information.

For the past 18 years since the end of the war in Kosovo, health care has proved a perennial problem. The public health system is not fit for purpose, while the costs of medicines and treatments in private facilities can be crippling for much of the population. Promises of a public health insurance system to drive up health care standards and bring Kosovo in line with its Western Balkan neighbors, have been many and frequent, matched only by the failure to meet self-set benchmarks.

In April 2014, the government finally passed a Law on Health Insurance, with the aim of ensuring universal access to quality basic healthcare services and therefore benefiting all sectors of society, but particularly poorer people who are particularly affected by high health care costs; the law provides for a mandatory health insurance scheme for all citizens, paid for by citizen contributions.

The Ministry of Health had planned to begin collecting premiums in January 2017, in order to begin building the Health Insurance Fund that is ultimately anticipated to be used to raise public health care standards. However in December, one week before the scheduled start date, it was announced that this first practical step had been pushed back until July 1, following concerns raised by international partners and internal critics over the government being ill-prepared to implement the law.

“No reporting has been made public these four months and the process has been characterized by a lack of information to the public.”

With the new start-date fast approaching, K2.0 looked into the preparations that the ministry of health has undertaken to kick off one of Kosovo’s most important health care reforms since the war. It appears that little visible progress has been made and just as many uncertainties remain as were present at the start of the year.

On the day of extension the minister of health, Imet Rrahmani, said that he would report monthly to the prime minister during the preparatory phase for collecting the premiums and that there would be a campaign of informing businesses — many of which will be required to pay employer contributions — and citizens about the scheme.

However, according to Blerim Syla, the head of Federation of Healthcare Trade Unions of Kosovo, “no reporting has been made public these four months and the process has been characterized by a lack of information to the public”; in light of this he questions whether the preparations can be completed in the short time remaining.

Such a perspective is echoed by Saranda Ramaj, a journalist for Koha Ditore who has extensively covered Kosovo’s health care system. “[Prime Minister Isa] Mustafa has said that without completing all preparations we should not start,” Ramaj says. “Now it’s the end of April, which means that in two months collecting the premiums will start and I haven’t seen that during these four months any major preparation has taken place — the situation is as it was in December.”

K2.0 has called and written to the Ministry of Health asking for more details of the preparations that it has undertaken following reader requests during our recent #IWantToKnow campaign, but persistent requests for an interview have been ignored.

What is clear, according to the Law, is that employees in the public sector and in larger private sector companies will be obliged to pay 3.5 percent of their salaries as mandatory health insurance contributions, while their employers will be required to match this amount. In smaller companies, with annual revenues of less than 50,000 euros, employees will be required to pay 2 euros per month, while employers will not be obliged to pay anything.

However, while the official line is that Kosovars will be required to pay these premiums from July 1, the Ministry of Health has yet to clarify some of the key details of the health insurance scheme and has made very little information public. For example it has not yet been revealed what health services will be covered by the new scheme, as a legally required list detailing these services and medicines has not been published.

Critics emphasize that without having a clear idea of the services that will be provided free of charge for an insured Kosovar, the whole process remains contentious. “If we start [collecting premiums] without a list of services and a patient gets diagnosed with cancer, will the Ministry of Health say that we cannot help to cure it because of the small budget?” asks Ramaj, rhetorically. “As citizens of Kosovo we should be aware of what we are paying for.” 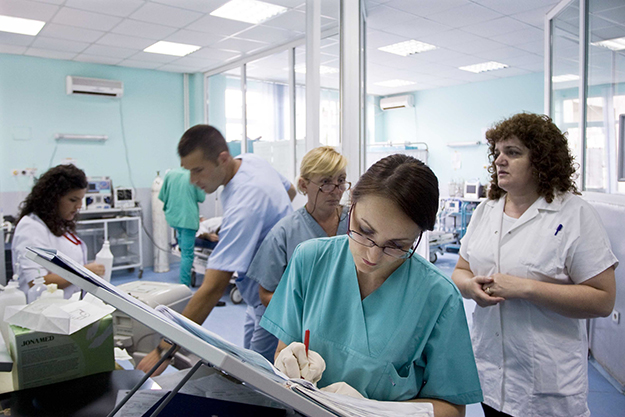 It is still unclear what services will be covered by the new mandatory health insurance as the government has not yet published key information. Photo: Atdhe Mulla / K2.0.

In fact, Article 37 of the Law on Health Insurance specifies that premiums can only begin to be collected after the List of Basic Healthcare Services has been approved by the government, along with a financial statement of the cost of the proposed package of services. These should first be drawn up by a technical committee and signed off by a Steering Board of the Fund, at least three months prior to the start of the fiscal year.

Another prerequisite before premium collection can legally begin, is that 75 percent of employees in the public sector and larger private sector organizations should first have been issued an insurance card or other means of verifying their health insurance registration status.

There is no evidence that any of these benchmarks listed in the Law have been met, while the public remains uninformed about the state of progress.

Despite these omissions, for Ramaj an even more pressing concern is the idea that premiums may begin to be collected before an electronic information system, that will digitally register all services and medicines to be reimbursed to insured citizens, is fully functionalized. The information system will be used to record when citizens have been reimbursed for services and medicines that they have paid for by linking to their health insurance cards, thereby helping to mitigate against misuse of the health insurance system by individuals attempting to defraud it.

Another concern of critics is managing the expectations of citizens. Syla is worried that once citizens begin to pay their premiums, they will naturally expect a higher quality of public health care for their money, whereas any improvements will inevitably take time to filter through. “Health service employees will be doubly attacked,” he says. “They will pay health insurance [premiums themselves as public sector employees] and will at the same time be attacked by citizens because the citizens will demand a better service after it [premium collection] and it’s their right.”

How far significant improvements in quality of service will be reflected in the long run is also in question as budgetary lines seem slim. According to the Law on Health Insurance, the Fund is unable to be topped up with loans, which makes it financially dependent on the money collected through premiums.

Ramaj points out that such a heavy reliance on premiums is problematic from a practical perspective as a significant number of people are in categories that are ‘exempt’ from paying premiums; having this exemptions is good “in principle” from a social perspective, she says, but it nevertheless makes implementation of the health insurance scheme problematic.

Those exempt from paying premiums, according to Chapter 2 of the Law, include poor families living under social assistance, former KLA members who were disabled during the war and their close family members, individuals living in state institutions, and prisoners. 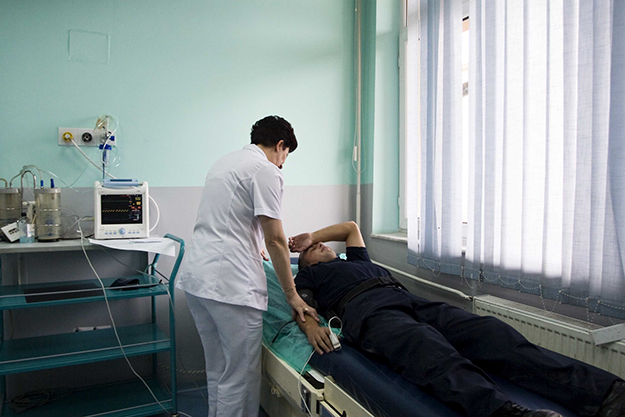 With many citizens exempt from paying health insurance premiums, questions remain over how adequate funding will be raised. Photo: Atdhe Mulla / K2.0.

Applying the exemptions relies on first accurately identifying how many people fall within these categories, something that is by no means straightforward, especially for wartime veterans and victims. The official process of verifying war veterans and civilian victims have not been concluded due to irregularities and false applicants; more than 46,000 applications were received between 2012 and 2016 from citizens claiming to be former KLA fighters, a number that is widely believed to have been significantly inflated by false applicants from people hoping to enjoy the financial benefits of veteran status — such as potential exemption from paying health insurance premiums.

There is still no end in sight to the verification process, and therefore it is unclear who would be potentially eligible for exemption from paying health insurance contributions. In the meantime the International Monetary Fund, one of Kosovo’s international financial partners, has warned that if the list of veterans is not reclassified and shortened it would endanger the country’s financial stability.

If the money collected through premiums proves to be insufficient, the government is able to inject central finances into the health insurance Fund from time to time with. Last year, public spending on the health sector was estimated at around 170 million euros out of Kosovo’s overall 1.6 billion euro budget. But according to the Ministry of Health’s 2017-2021 strategy, no substantial changes to the governmental budget allocated for the health sector are envisaged in the coming years.

Without more serious investment and a long-term vision for the health sector, critics are concerned that the whole health insurance process may be futile.

Ramaj agrees, saying that citizens will inevitably choose to receive treatment in the private sector, where standards tend to be higher. “You cannot treat them equally when the public sector has been left in the mud after the war and functions with equipment from the ’90s — and to say that you are equal with the American Hospital which operates with 2015 equipment…” she says, adding that the new scheme will simply help the private sector to flourish. 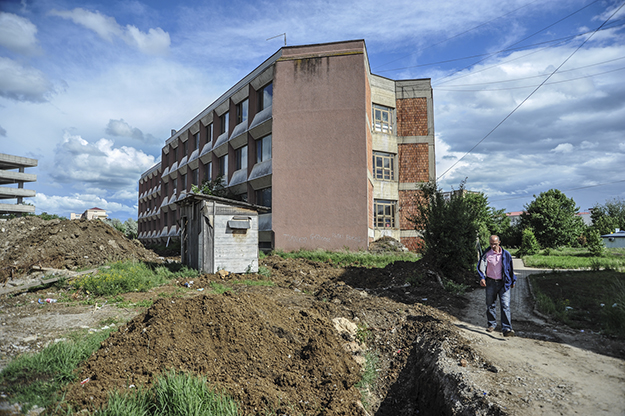 Critics say that there has been huge under-investment in the public health system for years. Photo: Atdhe Mulla / K2.0.

Private hospitals inside Kosovo and abroad have in fact already been benefiting from a lack of capacity in the domestic public health sector. Since 2002, the Ministry of Health has had a ‘temporary’ program for Medical Treatment Outside of the Public Health Service, which allows citizens to apply for public funding to pay privately for complex surgeries that are not available at the public University Clinical Center of Kosovo (UCCK). The fund has increased enormously in recent years — with the 5.5 million euros allocated for 2014 rising to 7.8 million euros in 2015 and again to more than 8 million euros last year — while it has recently been reported that the number of people applying for medical treatment outside of the public sector has increased.

The future of this program, and how it will fit alongside the new health insurance scheme remains unclear. Not only does it require significant funding that could otherwise be invested in the public sector, but the selective nature of offering specific treatments outside of the public sector appears to be at odds with the ‘universal’ nature of the new health insurance scheme. In the short term however, closing the program entirely does not seem to be on the table since some complex procedures, such as organ transplants and treatment for leukemia, are prohibited by law in Kosovo.

With premium collection for the new health insurance set to begin in under two months, despite many of the scheme’s details not having been ironed out, both Syla and Ramaj believe that it is being used as a political point scoring exercise ahead of local elections in November and widely anticipated early parliamentary elections. “Now the elections are coming, they [the government] will say that they are delivering health insurance,” Sylaj says.K