Youth Initiative activists will not be silenced - Kosovo 2.0
Blogbox | Serbia

Youth Initiative activists will not be silenced

Last week, eight activists from the Youth Initiative for Human Rights received an invitation to meet Serbian Prime Minister Ana Brnabić. The invitation came in response to an open letter that was sent to her, speaking out against the publication of books by convicted war criminals on behalf of the Ministry of Defense, which were paid for from the money of Serbia’s citizens.

I was one of the eight activists.

In the meeting with Brnabić, she was complimentary of our efforts, but offered no concrete actions that could be taken in response to our concerns.

At the end of last year, we published a report in which we presented different instances of the all-increasing presence of convicted war criminals in the political arena. Through political and institutional promotion, directly and indirectly, in a systematic manner, the “cleansing” of their biographies and the rejection of court verdicts for mass violations of human rights during the ’90s has been taking place.

In response to such action, we staged a protest in January 2017 against convicted war criminal Veselin Šljivančanin (who was convicted before the Hague Tribunal for crimes committed in Vukovar, Croatia), during which we stated clearly that we will not adhere to the glorification of war criminals, and used our whistles and banners to send the message: “War criminals should fall silent so the victims can be talked about.”

For that, we faced legal consequences in a Serbian court.

In the same week that we received our invitation to meet with the prime minister, we received the final verdict of the Misdemeanor Appellate Court, labeling our 2017 protest against the convicted war criminal as insolent and disrespectful behavior, and as such representing a disturbance of public order and peace. We have been convicted and fined approximately 420 euros a person. 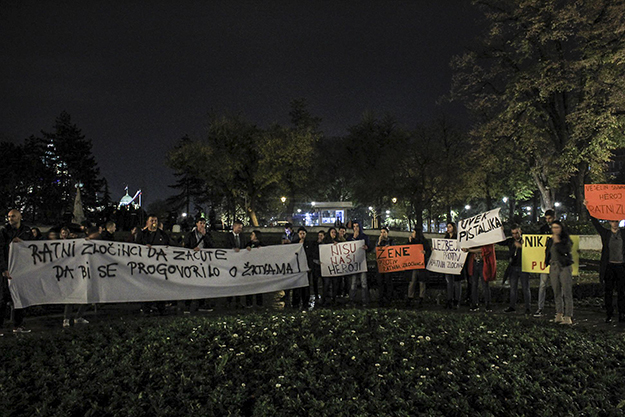 Today, in the National Assembly of Serbia there sits a convicted war criminal, Vojislav Šešelj. Despite the law stating Šešelj’s term of office should have expired at the point he received a convicting court sentence, the Assembly has still not confirmed the termination.

This year, at the International Belgrade Book Fair, the Ministry of Defense promoted the war memoirs of general Nebojša Pavković (convicted to 22 years in jail for crimes committed in Kosovo), as well as the literary work that deals with the memories of Vladimir Lazarević (convicted to a 15 year jail sentence for crimes committed in Kosovo), despite the Law on Serbian Armed Forces stating that if a person with official military rank is convicted of crime, he or she must be stripped of that rank.

They are all-present in public life; we may look at them on the front pages of daily newspapers and in political TV shows. They are sitting on National Assembly benches and have support from parliamentary parties, as well as that of institutions, and almost every day, from the front pages of dailies, different characters, descendants and followers of warmongering politics, openly speak of preparations for new wars.

Last week, after receiving our verdict, we organized a protest titled “Always the whistle, never more the rifle” in Belgrade city center, during which we symbolically blew into whistles as we had done in Beška, where the initial protest took place. The need to create a society that fosters peace for future generations has become even greater.

Our message is that we will not adhere to the silencing of peace activists and that we shall only be louder in repeating that war criminals are the ones who have to fall silent. The state must not be their microphone. 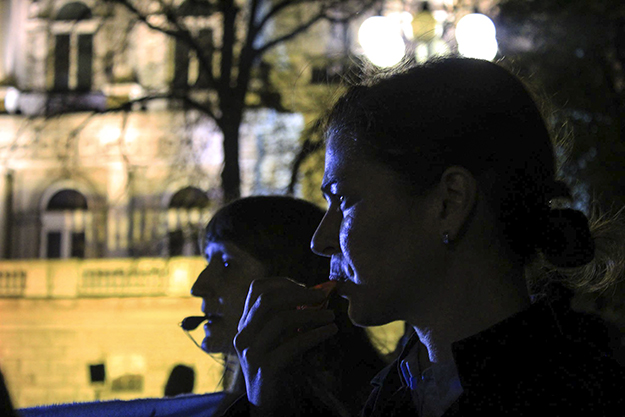 For years, we have fought against different kinds of relativization of crimes and heroization of those who have committed them. There aren’t many of us, but we exist because we know that the alternative to the madness dating from the ’90s (and maybe before that) must be there.

It is necessary for an alternative to exist for all the young people and generations that were born in peace, those who don’t remember the war, and whose knowledge about the recent past is weak or nonexistent.

Young people live with the consequences of a time for which they aren’t responsible; they are hostages of their present. We must bear in mind that peace is built every day, because actively dealing with the future that everybody talks about is ultimately what the future depends on.

The past, which is systematically pushed under the rug, and which we are constantly tripping over, is the obstacle we must get rid of.

The purpose of the Youth Initiative is to give young people the opportunity to create the future that they want for themselves, here, rather than seeing them leave to build it somewhere else.

Last week, we conducted three regional initiatives that overlapped. While in Serbia we demanded that all publishing activities dealing with books by war criminals are halted, and organized a protest, our colleagues in Croatia marked the places of suffering in Zagreb where people, primarily Serbs, were detained and killed in 1991, an event that is rarely talked about.

At the same time, the Initiative of Bosnia and Herzegovina has been actively implementing a campaign on the crime in Kazani for seven days straight. The war crime was committed in 1992 and 1993 on Trebević Mountain, while it was under the control of the 10th Mountain Brigade of the Army of the Republic of Bosnia and Herzegovina. The number of victims remains unknown.

We have no institutional support, but what we can count on is our persistence. For every romanticizing of the characters and works of convicted war criminals, we shall talk about their responsibility and verdicts; they are not representatives of the people, they are the people’s shame. Peace is the only value we will adhere to.

While war criminals are constructing narratives about the past and explaining how we should regionally cooperate, I am afraid that we aren’t on the right path. But, we will not be silenced, and we will use our freedom to speak to confront everything that moves us backward.

Despite all the challenges we face, our goal is our biggest motivator. We don’t want to be separated by hatred. Victims must not be disenfranchised and forgotten.

We invite you to support us in our struggle. If you wish to support our global campaign to gather the funds to pay our fine, you can do so here. Thank you!