A COVID-19 diary in prose

It was a short trip to Germany for Prishtina-based filmmaker Leart Rama and his crew earlier this month. They were excited to shoot a long-awaited documentary.

Some of the crew decided to take off for Germany despite the news on social media about COVID-19 going viral. But soon, their hopes were crushed as phone calls from home informed them that Kosovo would soon go into lockdown. After 24 hours they returned, traveling by air, bus and train just to make it over the North Macedonian border to Kosovo before everything was closed.

As events unfolded, doing a documentary in Germany was put aside and the focus changed to Kosovo and the COVID-19 lockdown.

While Germany is one of the countries that has been hit hard by COVID-19, it was lighthearted business as usual there, as people were mingling on the streets, shops and pubs, recalls Rama. Meanwhile, each step closer to the Balkans was accompanied by increasing intensity; faces were filled with fear and security measures became more severe.

“When I arrived in Kosovo, it felt like war to me,” says the 22-year-old filmmaker, adding that he was shocked that Prishtina’s busy streets had turned into a ghost town within only 24 hours.

But then, reconnecting with the place and its people, the apocalyptic scenery also was strangely poetic to him: “I was struck by how people mobilized that quickly, how they reduced their living space to a balcony, window and the walls of their homes for the good of all.”

Intuitively, Rama and his partner Redon Kika, who runs the production company Katarzë Films, decided to capture the haunting atmosphere on the streets and then reflect on it in the form of a diary to help themselves cope with the situation.

“At the start of COVID-19, we did not take the situation too seriously, but that changed upon realizing that self-isolation was inevitable… thinking about how to use this time to document what is going on in Prishtina, we decided to go outside always taking maximum preventive measures,”  Kika said. An actor by profession, Kika’s involvement in the project is mainly to choose the poem for each film.

The more images they collected, the more they realized that the awkward beauty of this historic time was rich in documentation and had the potential to give back a sense of collective solidarity to the people that were patiently and bravely self-isolating.

After the first video, the idea to launch a “Corona Diary” video series came about. To date, it features seven videos, up to four minutes each, all focusing on a visual theme narrated with spoken poetry. All of the videos are available on YouTube.

Confined to their houses, the protest was symbolic for Kosovo, as it mirrors the demonstrations that took place throughout the 1990s.

“For the first day, we wanted to reflect upon the meaning of ‘isolation’ itself,” Kika says.

It contemplates the vastness of the neighborhoods and comments on the spring that is yet to come. The coming season is visible in the slowly blossoming trees and the clotheslines dancing to the rhythm of the breeze, in contrast to the dim atmosphere of the empty streets.

“After the first video, we decided to include other poems because many people approached us wanting to become part of the videos,” Kika says.

He points out the poem, “My Home with Roots” by Eli Krasniqi that featured in the second video, “Home.” “Her poem talks about the lack of a home, and that during these times there are many still far away from home and yet many other families that have come together after a long time,” Kika says.

Krasniqi, who moved from Pristina to Graz, Austria many years ago, watched her poem read by the actress May-Linda Kosumovic. The poem that was originally written from a place in the diaspora and about a desire to return to her parental home, took on another life with the quarantine — a double sense of isolation, Krasniqi reflects.

Some of the footage was coincidentally taken in her old neighborhood and she became sentimental while watching the video.

“It is paradoxical, because although you see the apartments and balconies in close up, home is once more turned into an impossible dream given the context of the quarantine,” Krasniqi says. “I’m already feeling isolated in Graz. When will the borders be open again, so that I can leave this home where I am, to the other home, where I have cut the roots off so many times?”

Prishtina protests from its balconies

The haunting peacefulness was disrupted on the third day of the diary. It documented Kosovar citizens, their silent gazes from the windows and balconies, banging pots and pans to condemn Kosovo politicians for fueling uncertainty over the governments’ future during the pandemic. The protest was organized by the activist group Replikë and was incited by a dispute within the government. 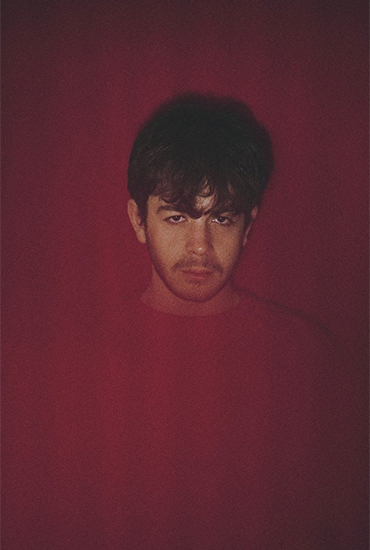 Leart Rama knew he had to document this historic period for Kosovo and the world. Photo: Jetmir Idrizi.

The protest, organized via Facebook, called upon all citizens to urge their politicians to deal with the COVID- 19 crisis by focusing on preparing the health care system instead of getting into disruptive disputes. Confined to their houses, the protest was symbolic for Kosovo, as it mirrors the demonstrations that took place throughout the 1990s in response to the Serbian police forces’ abuse of Albanians.

Rama, is too young to have experienced the peaceful protest in the ’90s. He only knows about it from family stories.

“When I heard the rattling and banging, I got goosebumps and tears were running down my face,” he says.

He added no poetry to this video as he felt the sounds of the protesters were melody and poetry itself.

“Kosovo is a poor country, and not all things function the way they should, but we have the courage to self-master difficult times.”

Without wanting to romanticize the difficult situation, it is the spirit of the people not giving up their agency, making themselves heard even if they cannot go out that he says he found profoundly touching and worth documenting.

Standing with his camera in Zahir Pajaziti Square, Rama found it hard to focus since the experience was all encompassing. “I somehow felt so grateful for being able to capture this moment that would go into the history of Kosovo,” he says.

Contrary to his expectations, upon uploading the video online it went viral on social media. “I realized that all of us became agents and witnesses at this point in time through the images,” he says.

With the adrenaline subsiding after the first protest, the fourth video “Sunday” addresses the gloomy mood of isolation.

It jumps from collectivity to the urge for solitude with a poem by Eljesa Beka, who described sharing an intimate piece of herself as rewarding.

“With these views and sounds, I began to appreciate freedom, the people, and Prishtina more, even if this city can be very bleak at times,” she says.

“Kosovo is a poor country, and not all things function the way they should, but we have the courage to self-master difficult times,” Rama reflects.

He grew up in Rahovec and studied film and directing at the University of Tirana. He moved to Prishtina a few years ago, a place that he worships for its collective solidarity and creative energy.

Just a few weeks ago, Rama was selected to join a renowned masterclass led by Werner Herzog in Colombia, a dream that he could only make real thanks to donations from all across the cultural community of Prishtina.

Although this trip is now postponed, giving something back to the city is Rama’s motivation. “The Corona Diary” is funded by the Municipality of Prishtina who gave a grant for a documentary series “Untold” earlier this year to Katarzë Films.

They had planned to document untold stories of everyday life in Kosovo, before shifting the focus to the “Corona Diary” as events unfolded.

Without this grant, Rama and Kika say they would have been unable to share these images, as freelancing in Kosovo is difficult due to the economic situation. Rama encourages all aspiring filmmakers to apply for funding, get their own equipment and try to do their own thing; to have the freedom to share the stories they want to be heard.

Because of this pandemic, Rama says he is anxious about the financial situation over the next few weeks. Yet continuing to work on the “Corona Diary” series gives him the energy to continue.

Always wearing gloves and masks and respecting the official curfew, Rama and Kika have decided to keep going with the diary for as long as the situation endures.

“It is due to the collaboration with others who express their willingness to participate, be it by sharing their poetry, music or voice, that this project evolved into such a beautiful one,” Kika says. “In these times of isolation it is this collective energy that motivates us to continue producing more videos with and for others.”K

Crumbs of the government recovery package